Significant tumult before a player's senior season can be unnerving. Theoretically, it should be an athlete's best year - at the peak of experience and physical development - often the ideal circumstances to close a career on a high note.

Head coach Micky Blythe was removed from his role in late November; one of the program's most dynamic players, Anthony Marafioti, decided to transfer to Gannon University; and there was initial ill will toward the Mavs' athletic director. It seemed a foregone conclusion that Lachlan Beever, an NCAA Division III All-American and the team's leading scorer, would pursue Division I offers.

Once tempers cooled, however, Ali, Burke and Pitts - all natives of England - decided to stay at Medaille for their final seasons, all for slightly different reasons.

"I’m a firm believer of starting something and making sure to finish it," said Ali, the conference's preseason offensive player of the year. "Medaille has been great for me, and I’ve thoroughly enjoyed every minute I’ve been here. The grass isn’t always greener and I didn’t want to move to another programme and then regret it.

"I wanted to finish the four years with the boys, especially Burke, who I’ve been with from day one and is the only one left from my recruiting class."

Even with starters Marafioti, Beever, Levi Bojang and Albert Morales all departing, and another, Rahim Melon, exhausting his eligibility, transferring was never a consideration for Burke. 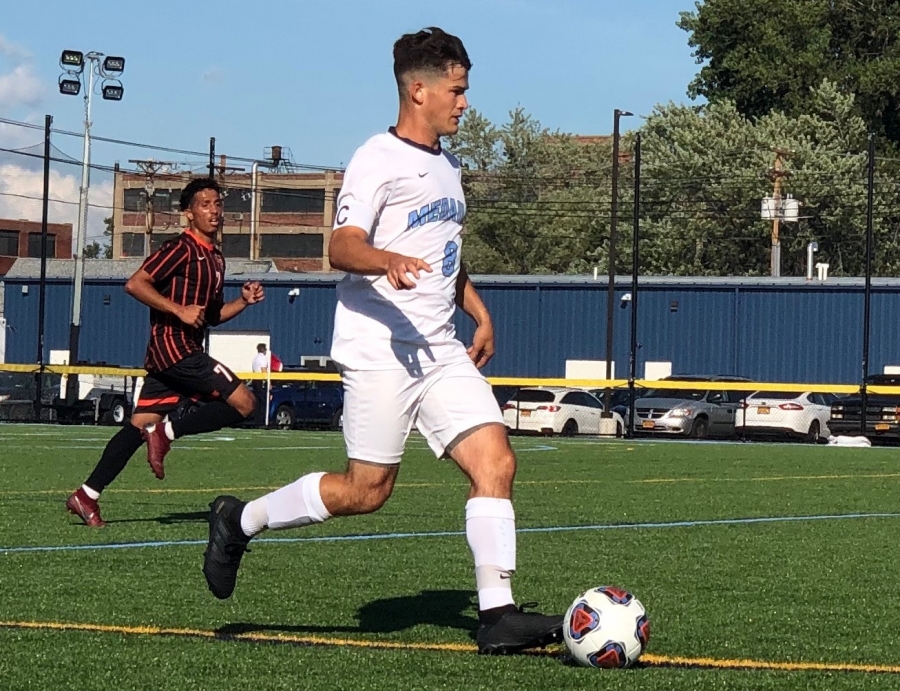 Matt Burke, in white, is a crucial cog in the Mavericks' midfield. (Ben Tsujimoto/Buffalo News)

"I looked at playing under the new coach as an exciting challenge, and with the other boys staying as well, it made the transition a lot smoother," the Chesterfield native reflected. Burke's versatility, toughness and unselfishness have helped his teammates buy in to the philosophy of new coach Craig Wilkinson and assistant Sean Hallas.

Although he wasn't initially familiar with NCAA transfer rules, the decision to remain in Buffalo was a no-brainer for Pitts once he learned that transferring for a second time would mean sitting out a year.

"Staying with the boys did factor into my decision somewhat as I didn't want to do another big move like at the end of my sophomore year when I first came [to the United States]," said Pitts, who transferred in from University of Houston-Victoria, an NAIA school in Texas. 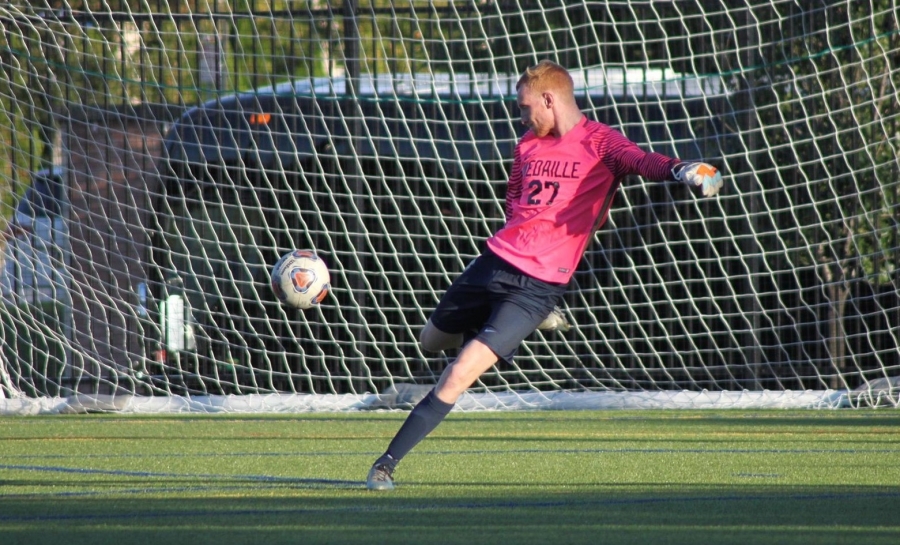 Jonny Pitts transferred to Medaille before the 2018 season and has stabilized the goalkeeping situation ever since. (via Medaille Athletics)

Their camaraderie has helped them through a period of uncertainty and even weathered the storm of a difficult non-conference slate, where growing pains and a noticeable drop in collective talent saw the Mavs enter AMCC play with a 2-4-1 record.

Ali's close friendship with Burke stems from their shared four-year experience - filled with joys of victory and sorrows of losing - and an overall passion for football, while Burke and Pitts bonded quickly over tennis; the pair was the first doubles team to win a match for the Medaille program. The trio stuck around Buffalo for the majority of this past summer, with junior midfielder Joel Rodwell, and grew even closer as a group.

Although all three hail from the UK, they're not within an hour of each other, and they all support different clubs in England - Pitts favors Chelsea, Ali supports Manchester United and Burke follows Reading. 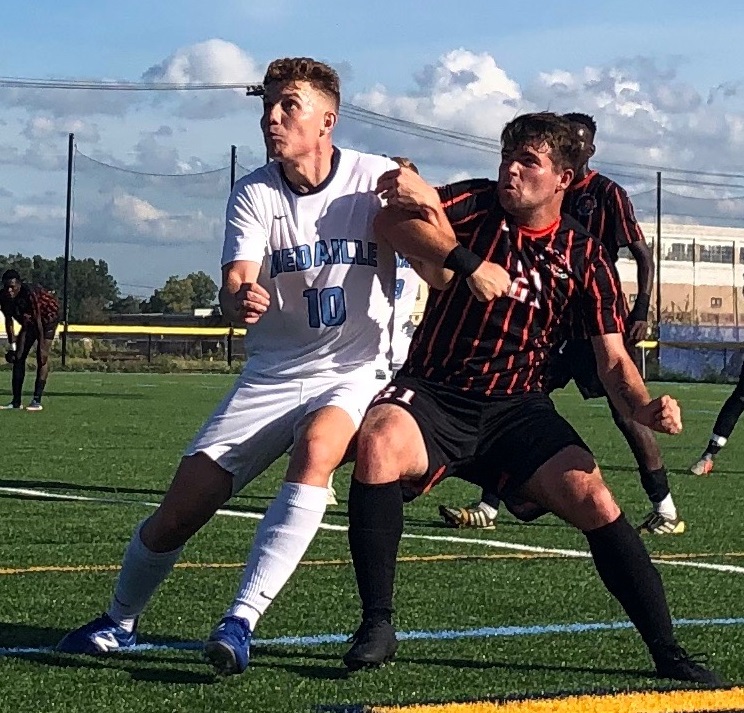 Ali, in white, eyes a ball in the air against Buffalo State. (Ben Tsujimoto/Buffalo News)

Even though all were chosen to all-conference teams last season, Ali receives the most fanfare. The Southend-on-Sea native is the seventh player in program history to exceed 100 career points, and he's well on his way to a third consecutive All-AMCC first team appearance.

The other two are worth watching, though, as Burke - a holding center midfielder - plays far bigger than his size, and Pitts has a knack for highlight-reel stops at full-stretch.

The Mavs have positioned themselves well once again in the soft AMCC, jumping out to a 5-0-1 record. Wilkinson's side has won four straight matches ahead of Tuesday's clash with D'Youville College, at 6 p.m. at the new Medaille Sports Complex at Buffalo Color Park (427 Elk St.). Ali will miss the match to injury but is expected back soon.

There's unfinished business for the senior trio, especially Pitts, who transferred to the Mavericks the year after Medaille ousted Behrend to secure a place in the NCAA Tournament.

The lanky goalkeeper from Hemel Hempstead has been critical of his own performance in last year's AMCC final, a 3-1 loss, but a measure of revenge was earned last week when Medaille beat No. 10 Behrend, 1-0, behind a Tom Greenhalgh goal. Pitts stopped seven shots in the effort.

"For me personally I didn't think I had a very good game in the final against them so to have a near perfect performance with a clean sheet was very satisfying," Pitts said.

"[Beating Behrend] does fill the team with some confidence," added Ali, who previously had never beaten PSB in regular-season play. "We started off a little slow and heads do naturally drop, so to come back from our slow start and now start to put together some results shows the great character from the squad."

"The feeling of losing last year's final is still on my mind and did nothing but motivate me and the returners to beat them," Burke said.

With five total matches - four conference games - remaining before the postseason, all three understand the gravity of what lies ahead, and that their playing days could be numbered.

"Though I don't want to stop playing competitively I know that I won't be able to find anything that matches the training every day and overall atmosphere of college soccer," Pitts said, "so I want to keep it going as long as possible. Every game is a cup final from here on in."

"The most important part for me is just making sure I enjoy it and cherish it," Ali added. "These four years have flown by and I’m very proud of what I’ve achieved and winning it again this year would put the icing on the top."

"A second AMCC championship would mean everything, and to win it with the group of boys we’ve got, especially Mitch and Jon, would be the best way to tie up my college career," Burke summed.