Only a third of students from poor and middle-income families in Erie County graduate college on time in New York, a new study shows.

That’s a little better than the statewide average.

But their outcomes in college also vary widely depending on where they went to high school.

Riverside, South Park and Burgard, for example, had the lowest percentage of students go on to college and graduate on time.

East Aurora, Iroquois, Eden and Williamsville North were among the schools at the other end of the spectrum.

At the top were two other Buffalo high schools: City Honors and Middle Early College.

That’s the upshot of a report being released Monday by the Education Trust-New York, a nonprofit that advocates for students of color and low income.

It offers a rare peek at how students from individual high schools performed upon entering college.

It also raises a big question: Are students coming out of high school prepared?

Faculty offer anecdotes, like today’s students don’t read enough books, but the basic academic skills for them to be successful are there, said Thomas Chambers, dean of the College of Arts and Sciences at Canisius College.

“They might not be exactly what we want in terms of advanced critical thinking or analysis or writing, but they develop,” Chambers said.

Chambers mentioned a recent example of an introductory chemistry course where the entire class was struggling. It turned out the students didn’t have a grasp of some of the more basic concepts, so the professor changed the pace of the course until they could catch up.

“It’s not so much that they’re unprepared, it’s that college work is different than high school,” Chambers said. “It’s raising it to that next level.”

In fact, college readiness has become a huge topic, not only because of the rising cost of college, but because of the growing – and increasingly diverse – population of students showing up on campuses.

Like Canisius, SUNY Buffalo State has responded with a variety of supports for students, many of whom are first-generation college students, said Amitra Wall, associate provost.

One example: Partnering with Say Yes, which guarantees public school kids from Buffalo free college tuition, to boost the numbers persisting in college from one year to the next.

“I think it’s a different type of student that we have,” Wall said, “and we meet them where they are.” 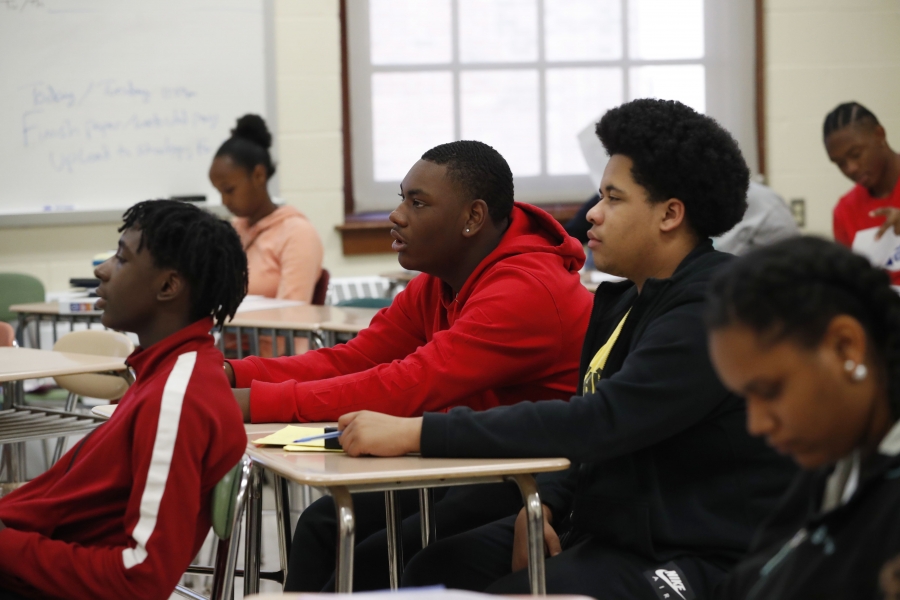 Middle Early College High School has a higher percentage of Tuition Assistance Program recipients graduating from college in four years than other high schools in the county. These juniors spend the morning at their school and in the afternoon, they will be at either Erie Community college or SUNY Buffalo State. From left are Brandon Jemison, Roy Taylor and Jamari Wimberly. (Sharon Cantillon/Buffalo News)

Getting 'to and through' college

Ed Trust looked at data obtained from the Higher Education Services Corporation for students who enrolled in a New York college the fall after graduating from high school in 2012 and 2013 and who received aid through the state’s Tuition Assistance Program.

The grant program provides financial assistance for families who earn up to $80,000 a year.

Ian Rosenblum, the nonprofit’s executive director, acknowledged that the data is limited. It captures only a slice of those who obtained either their two- or four-year degrees.

But, he said, it also provides a glimpse into how well high schools may be preparing their students, particularly that poor to middle-income population, which is critical.

“There are certainly lots of factors that go into whether a student ultimately graduates college on time, or graduates at all,” Rosenblum said, “but one of the key factors is the preparation they received.”

The nonprofit created an online tool for the public to access the data for their local high schools. It’s meant to raise questions about whether students are being prepared well enough to make it “to and through” college or where high schools might need to focus more attention.

“We believe the best measure of college readiness is whether students ultimately succeed in college, and that requires looking at data that combines what happens in K through 12 with what happens in a student’s postsecondary experience,” Rosenblum said.

Here’s what the data showed for:

• New York State. Among the 2012 and 2013 high school graduates from across the state, 30% ended up completing college on time.

That figure rose to 57% when those who graduated by December 2018 – taking more than four years – were included.

• Erie County. Among 48 district and charter high schools in the county, 34% percent of the graduates from these two cohorts ended up completing college on time. That number rose to 58% by December 2018.

• Individual high schools. Schools where less than 10% of the two cohorts went on to college and graduated on time included Riverside, South Park, Math Science Technology, Burgard and Charter School for Applied Technologies.

Schools where at least 50% went on to college and graduated on time were East Aurora, Iroquois, Eden, Williamsville North, City Honors and Middle Early.

“The biggest thing that this school does is prepare kids for college,” said Susan Doyle, principal at Middle Early. “They say it’s hard – but they like coming to school.”

In fact, Rosenblum pointed out, one of the takeaways from the study was the benefit of dual enrollment programs that connect students to college opportunities early in high school.

That includes Middle Early, which was tops among local high schools for the percentage of students who went on to college and graduated on time.

“It’s very planned,” said Doyle, the school’s leader since its inception. “We know we have to support them. We’re doing a lot of college readiness. And from Day 1, when they enter, they hear that failure is not an option."

The small high school, located inside the Bennett High School campus on Main Street, allows high school students to work toward a free associate degree at the same time they pursue a high school diploma.

Started in 2003 in partnership with Erie Community College, Middle Early was designed specifically for middle-of-the-road students to inspire them and get them ready for college.

Students take only high school courses in their first year and then gradually progress to an entire course load of college work in the senior year.

In a “fifth year,” the students can earn a free associate degree in such areas as criminal justice, physical education and business administration.

Some don't earn it after five years, but that's OK, Doyle said. Students have been successful here, she said.

“Kids leave us with the confidence that – if they’re willing to work hard – they can do anything they set their mind to,” Doyle said.