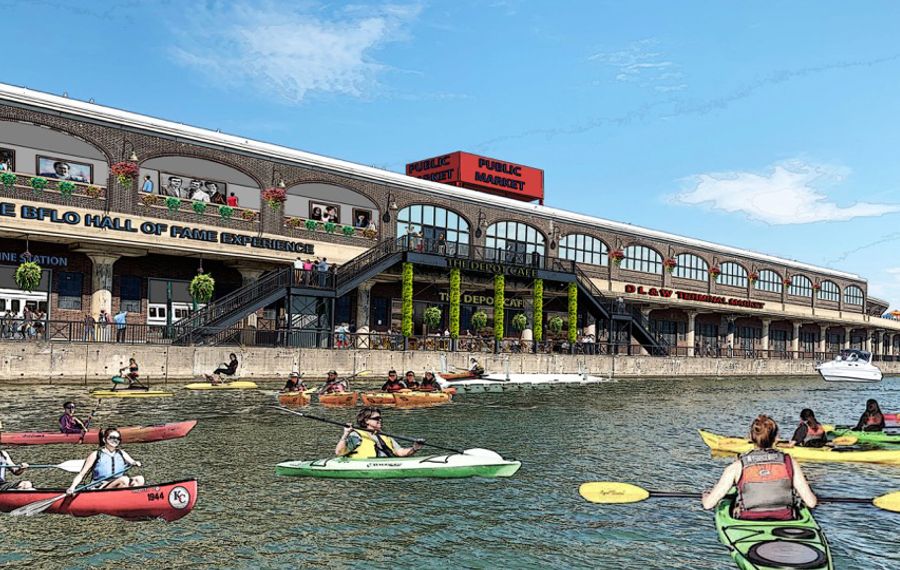 Maybe it’s because Samuel J. Savarino can view the hulking Delaware Lackawanna & Western Railroad terminal from the window of his Cobblestone District condo.

Then again, maybe years of development experience leads the chief executive officer of Savarino Cos. to envision the DL&W as something beyond a Metro Rail maintenance facility.

Though he is the only developer responding to the Niagara Frontier Transportation Authority’s request for proposals to transform the second floor train shed into Buffalo’s latest waterfront attraction, Savarino remains more than enthused.

While no final decisions have been reached, he envisions 140,000 square feet of indoor and outdoor space teeming with visitors seeking more from their Canalside experience. Combined with NFTA transit and infrastructure investments, Savarino says Buffalo can join the ranks of eastern cities offering a public market attraction (think Philadelphia, Boston and Baltimore) and “something to see and do.”

“If you’re at Canalside and you’ve been to the museum and the carousel, but you still need a beer and a hot dog,” he said, “where are you going to go next?”

Savarino and his team think they have the answer.

“It will become an iconic public destination that showcases Buffalo history, incubates new local businesses, and cultivates our local creative community,” the Savarino proposal says. “It will be inclusive, welcoming and engaging for everyone.”

He also thinks duplicating Philadelphia’s Reading Terminal Market is too grand a goal (but likes the City of Brotherly Love’s new and more compact Cherry Street Pier). By combining myriad elements, Savarino says the DL&W could emerge as a multiuse destination and gain the purpose its second floor has lacked since the last passenger train departed in 1962.

“Short-term improvements — amenities, programming, art, design — that are part of a larger, more permanent vision,” proclaims one of the Savarino proposal’s bullet points. “LQC is a way to generate excitement, partnerships and support.” 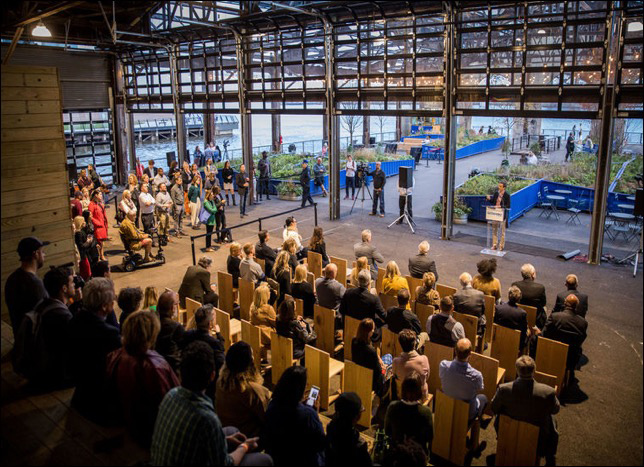 Savarino Cos. envisions a public space for events and meetings as part of its proposal to the NFTA for redevelopment of the DL&W terminal.

The NFTA is not commenting on the Savarino proposal, noting that DL&W decisions remain for the near future. And most observers see the need for government investment in the project beyond what New York State has already earmarked. But for now, the authority is concentrating on a $20.4 million project to reintroduce passengers at a new Metro Rail station on the Buffalo River side.

Though the NFTA plans to accommodate developers and eventual visitors with escalators and elevators to the second floor, it says it must now reconfigure the yard tracks and overhead catenary along with other infrastructure work in a project expected to be completed in late 2021.

The preliminaries all add up to a significant project in itself, according to NFTA Executive Director Kimberley A. Minkel. “The DL&W is in some ways the heart of our light rail system,” she said a few days ago. “That’s why this first plan is really critical to our operation. Without this project, we can’t embark on the second phase.”

Minkel also will not comment on Sunday’s report in The Buffalo News that the authority received only one response to its request for DL&W proposals. Still, she promised “that in short order, we will share very exciting news with the public.”

Whether or not the Savarino proposal is ultimately chosen, it appears to meld with the NFTA’s vision for the terminal’s future. Savarino emphasizes a facility with no admission fees and many reasons to visit. 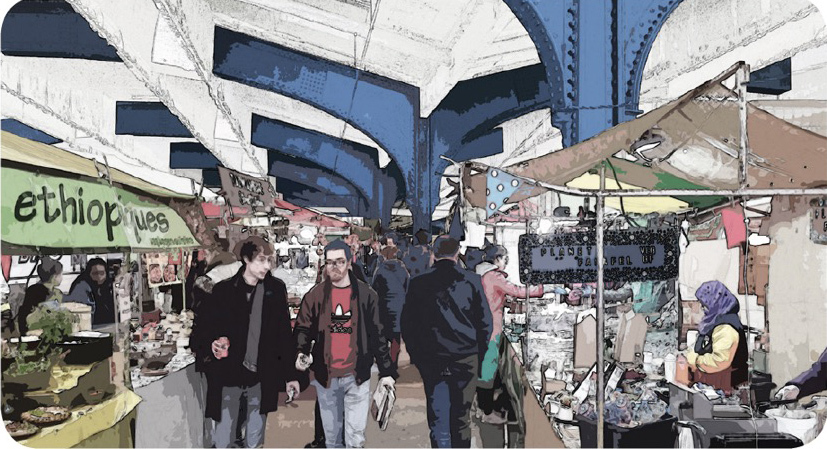 Savarino Cos. sees the market concept succeeding if complemented by other activity inside the former train shed.

He envisions a community kitchen for small food and beverage companies to prepare offerings for second-floor stands. Art studios could dot the interior, and serious talks involve a proposed Buffalo Experience Museum housing Buffalo halls of fame for sports, music and broadcasting.

Details of a “market” experience still need to be worked out, but Savarino says his team has an idea.

“When we say ‘market’ it’s in the widest sense; often not just food or a supermarket,” he said. “It does involve public interaction with enough of a market, retail and recreational component to make it interesting and viable.”

In the summer, the massive rail approach deck at the facility’s outdoor south end could feature a park setting amid the aroma of Cheerios baking at adjacent General Mills and the rumble of Metro Rail exiting the Yard and Shops complex the NFTA would retain below.

“All that drives interest and tells our story,” Savarino said. “The empty grain elevators are art in and of itself. Integrate it, get used to it being there, and celebrate it.”

Courtney S. Cox, project development manager, said Savarino’s presence in the neighborhood at 95 Perry St. leads to an understanding of both possibilities and limitations. He also emphasized a commitment to a “public process.”

“Our biggest theme is organic evolution with what the community wants and desires,” he said. 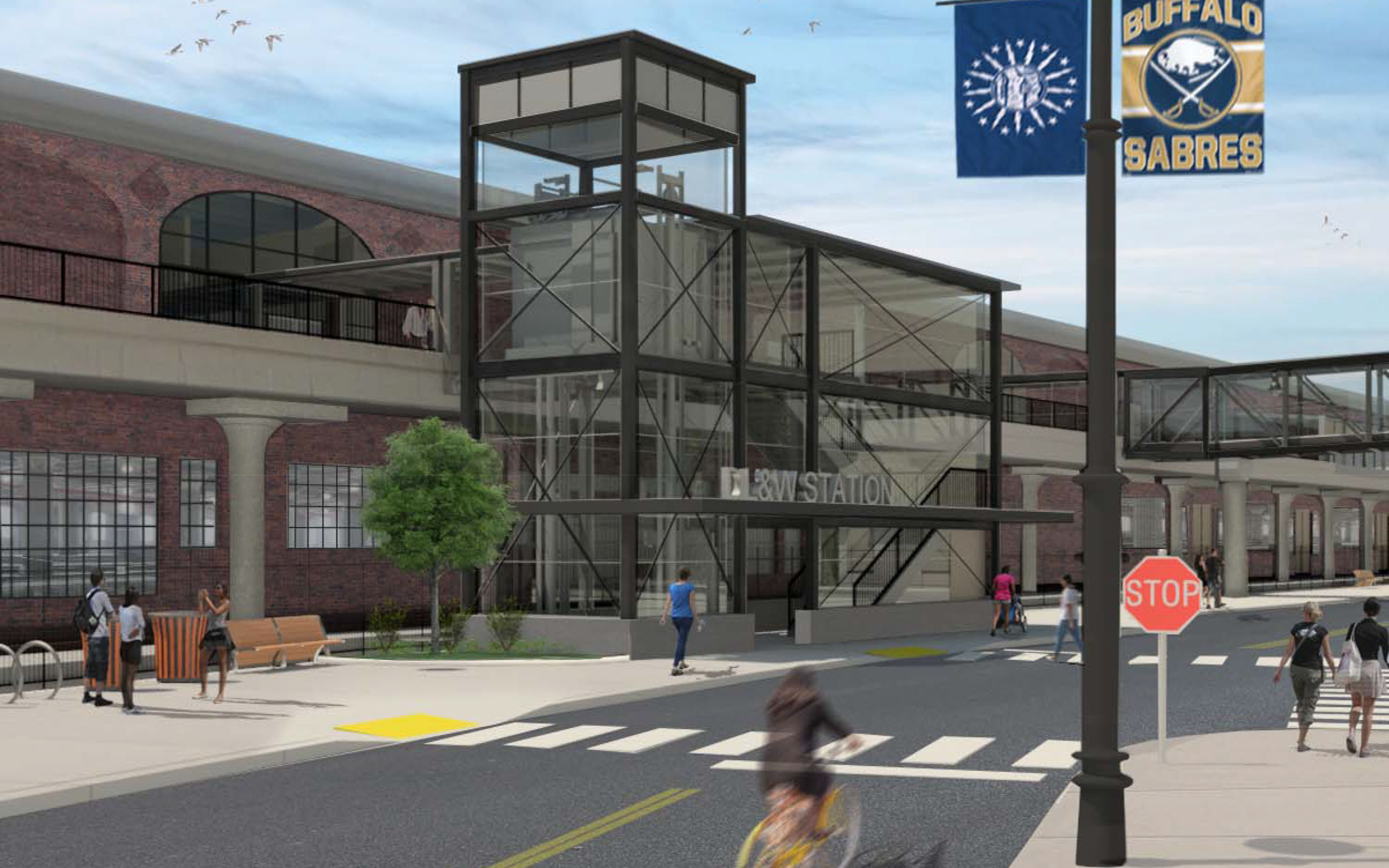 Planners envision an entrance to the DL&W at South Park Avenue and Illinois Street, along with a skybridge to the KeyBank Center parking garage.

Major challenges lie ahead. Cox and Savarino say the building needs structural improvements in addition to the escalators and elevators, and the skywalk from the Illinois Street parking garage is considered crucial, though the proposed skywalk to KeyBank Center is not. Truck access for supply and trash removal must also be addressed.

Even the deep track beds between the former passenger platforms have an advantage, they say. Utility lines can run through them and be covered for easy maintenance access.

“The building is what it is, with train platforms that used to be part of a grand and glorious station,” Savarino said. “We have uses that complement.”

Savarino sees a three-phase process. Years 1 and 2: cleanup, preparing the space and initial “light programming.” Years 2 through 4: scaling up the program with commercial and retail offerings. After Year 5, building on the experience.

The developer realizes he stands alone in tackling such a huge project. Others question whether enough people would visit, especially in the winter. And Rep. Brian Higgins says the NFTA has not promised enough infrastructure improvements to entice many developers.

“We have investments in the neighboring community and certainly see the DL&W every day,” he said. “We just thought what we have proposed is a very good public use — its highest and best use.

“This requires an awful lot of legwork, imagination and public input,” he added. ”I can’t say that if we weren’t already in the neighborhood we would want to.”