This journey started with a casual wish. Irene Taylor McVay was dreaming out loud to a pair of fellow educators from her time at Buffalo's City Honors School about paying a visit to her hometown in Farmville, Va., which would provide another chance for McVay, in her 80s, to see some of the places that played a major role in her life.

Margaret Cardina and John McTigue, a married couple who met while teaching at City Honors, understood the opportunity. Those landmarks explain why McVay was part of a turning point in American history. So they not only offered to drive her to Virginia, they asked if McVay would mind if they checked to see if local schools might be interested in hearing her speak.

“Some things are a once-in-a-moment opportunity,” said Carolyn Jones, principal of the Prince Edward County Elementary School, where McVay, 85, expects to address a hall today filled with third and fourth graders, following her meeting Thursday with about 20 Prince Edward high school students.

"I'm so glad I came back," McVay said, after many teachers and administrators joined the teens in hurrying toward her once she spoke, eager for the chance to shake her hand. 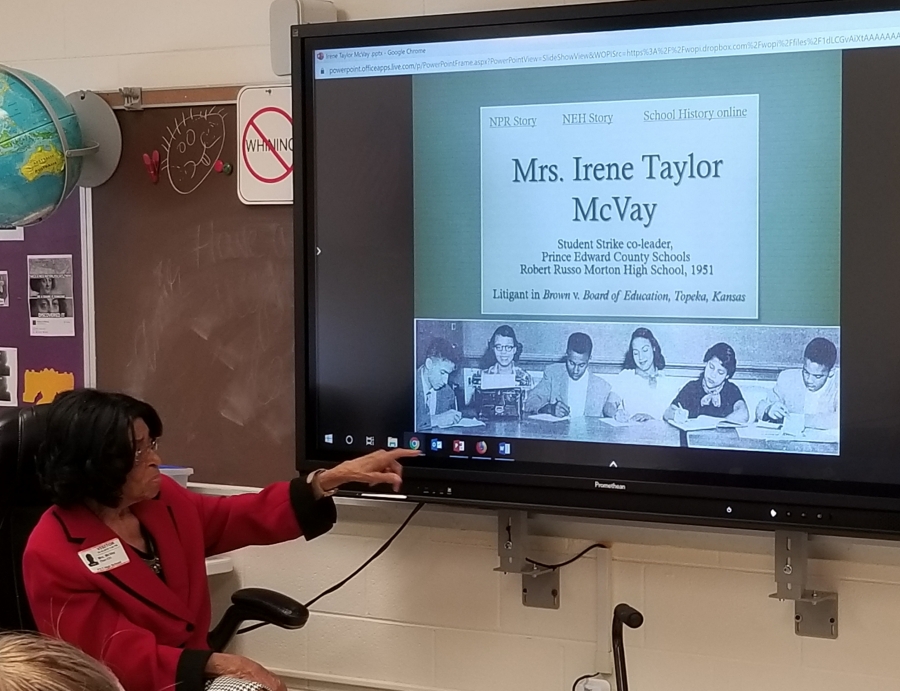 Irene Taylor McVay gestures at a teenage image of herself during a visit to the Prince Edward County High School in Virginia. (Photo courtesy of John McTigue)

Almost 70 years ago, on April 23, 1951, the 16-year-old McVay was among 20 students at the heart of a risk-it-all walkout at the Robert Russa Moton High School in Farmville, a school restricted to African Americans during an era of what was known as “Jim Crow,” or legally mandated segregation.

The late Barbara Rose Johns, McVay's childhood friend, was the leader of the strike. A small group of teenagers pulled it off by passing on a bogus message to M. Boyd Jones, the school’s principal, that some students were in trouble downtown – a ruse to get Jones out of the building, making sure no one in the white community wrongly targeted him for being the creator of the plan.

Johns then made an announcement, summoning everyone to an assembly, where she asked the teachers to step outside. In front of more than 400 teens, she offered an impassioned plea, calling for a walkout to protest wildly unequal conditions in white and black schools in Virginia.

The action soon attracted the attention of lawyers with the NAACP, whose offer was accepted by the students: They would take on the case, as long as it involved a quest for full integration of the school system.

Initially denied in federal court, the Farmville appeal became one of five cases considered as part of the Brown v. Board of Education of Topeka decision, a Supreme Court ruling that shattered the American rationale for segregated schools.

Even so, the ramifications were painful for many years. J.A. Stokes, 87, a friend of McVay's and a leader of the effort, recalls how a cross was burned as a warning in 1951 on the school grounds, and how the Brown decision triggered bitter resistance to integration in Prince Edward County – including a shutdown of Moton and all public schools.

It was McVay, Stokes said, who first told him how Johns, a junior, envisioned a collective response "to right the wrongs that had been done in Prince Edward County, and we built a coalition that changed history."

At the time, Dr. Martin Luther King Jr. was still attending a theological seminary. The effort in Farmville, Stokes said, was a "key to open the door" for the growing civil rights movement, of which King would soon become a captain. What made it so extraordinary, Stokes said, was that it was initiated by the teens themselves.

“It had to be God helping us,” McVay said by telephone Thursday, from Farmville. She spoke of meeting the legendary Thurgood Marshall, a lawyer and future Supreme Court justice, during that time. She remembered how he listened intently to the teens, how she "could see it was hurting him and he said, ‘I’ve got to do something.’ ”

Those last five words are the driving mission of McVay's life.

She became a memorable presence in the Buffalo schools, where she worked as an aide for more than 40 years. It was McVay, distraught about the murder of King, who started the “Keeping the Dream Alive” remembrance that she and fellow educator Jim Duggan turned into a City Honors tradition.

Still, few in the larger community fully understood her direct involvement in seismic events that rolled back centuries of American injustice.

“She was always very modest,” McTigue said, “and even many of the kids at Honors never had any idea about her role in the Brown case.”

Ask how it happened, and she says the same five words: She had to do something. Her parents, Odessa and Ocie Taylor, were farmers who emphasized an education. McVay and her siblings faced a 5-mile journey to class, and they would often be walking on the side of the road when buses carrying white children whistled past.

Their school itself was crumbling, parts of it thrown together, with an overflow of students forced into tar paper shacks. Classes were bitterly cold and raw in the winter months. Students often stood because there were not enough seats. When it rained, in many spots, the water came right through.

Johns, McVay, Stokes, his twin sister Carrie and a small group of friends began talking quietly about whether there was something they could do. McVay said she and Johns made their plans by passing notes or catching bits of conversation where they could, such as within the walls of the First Baptist Church.

Jones, the principal, was a kind man who “didn’t know a thing about it,” McVay said, though she remembers, during the planning stages, how he saw her one day and said: “Miss Taylor, you’re moving awful fast.”

Even at 85, she feels that urgency.

McVay moved to Buffalo in the late 1950s, after hearing conditions were better here for children. She and her husband James, who died three years ago, were married 57 years and raised four college graduates. That thought caused McVay to recall how her parents always advised her to read and study, and how her grandmother would offer an almost spiritual certainty when McVay asked about American equality:

For a moment Thursday, in the place where she grew up, McVay wept.

Yet she recovered quickly. She was on her way to the high school, where a crowd of teenagers came together to hear her speak, and McVay understands the nature of that age. She knows the world can seem to be a harsh and overwhelming place, in which students hardly believe they can make a difference.

“They need to know how it got started and they need to appreciate how far we’ve gotten and that they’re people and they've got a voice,” said McVay, who made one central point:

In Farmville, a group of teenagers helped to change the world.

Today she expects to stop by the Moton Museum, a civil rights landmark within the building that became the successor to her old high school. She will also visit those elementary students, tiny beneficiaries of every risk she took.

She wants them to realize that they are much like her. She will tell them of a passion that burns like a match set to paper, an emotion that fueled her from the time when she was little – and the belief, in an era still filled with too much struggle, that she hopes they will embrace and carry on.

Even at their age, McVay said, “I knew a change had to come.”