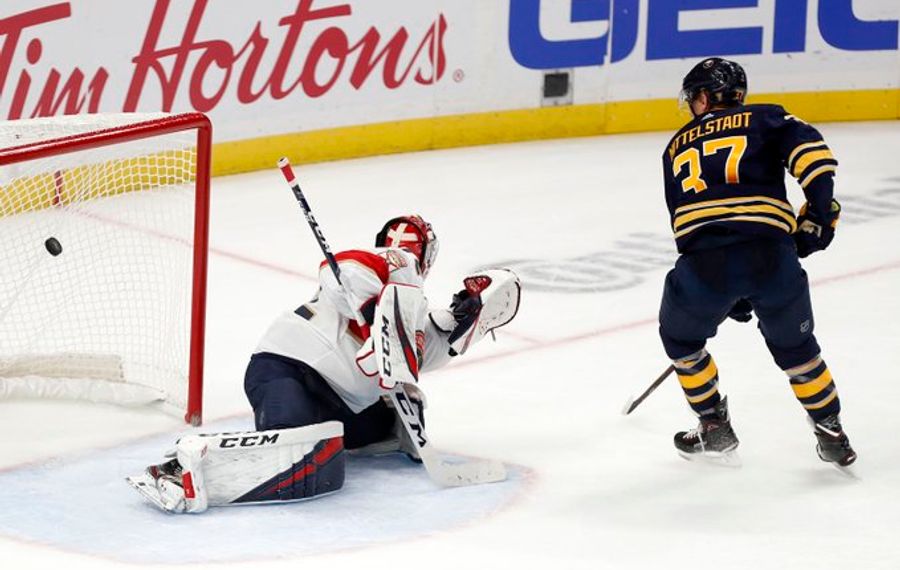 Linus Ullmark bailed out the Buffalo Sabres this time. Each of his teammates who spoke to the media inside their KeyBank Center dressing room late Friday night acknowledged that fact when recalling how they escaped with a 3-2 shootout win over the Florida Panthers.

Ullmark stopped 41 of 43 shots during regulation and overtime, as well as each of the Panthers' two shootout attempts. That allowed Casey Mittelstadt to clinch the Sabres' 4-0-1 start to the season — matching their best mark since 2009-10 — with a backhanded shot over sprawling Florida goalie Sergei Bobrovsky in the third shootout round.

Winger Kyle Okposo, who assisted on both Sabres goals during regulation, called this a "big two points" and an important lesson for him and his teammates. They squandered a two-goal lead in the third period for a second consecutive game, relying again on their goaltender to fend off a barrage late in regulation.

Though Panthers winger Mike Hoffman scored the tying goal with 11 seconds remaining in regulation, Ullmark ensured the Sabres finished the night atop the Atlantic Division.

"I thought we were able to learn from that and settle down, manage the puck better, stayed stronger inside," coach Ralph Krueger said of the Sabres' dip in play during the third period. "But overall, really pleased with the calmness on the bench as we headed into overtime, the belief that we could still win. The lack of disappointment in that late goal is really what sticks with me at this moment."

The Sabres had every reason to falter when Hoffman's wrist shot from the right-wing circle went over Ullmark's glove and into the net. Their patience was tested throughout the game by Bobrovsky, a two-time Vezina Trophy winner and Florida's top offseason acquisition.

Bobrovsky stopped all 13 shots he faced in the first period, including a breakaway by Mittelstadt and a pair of one-timers off rebounds, and held the Sabres' prolific power play scoreless in four opportunities. Additionally, the Panthers (1-2-1) controlled possession for the first half of overtime.

Ullmark, who has stopped 82 of 87 shots in his first two starts, tilted momentum with his glove save on Denis Malgin in overtime. Moments later, Jack Eichel and Henri Jokiharju rushed down the ice for a 2-on-1. Bobrovsky then made a flurry of saves on Mittelstadt, Sam Reinhart and Rasmus Ristolainen to force a shootout.

The Sabres were outshot by the Panthers, 43-32, including 19-4 during the third period. Four minutes after Buffalo gained a two-goal lead, Evgenii Dadonov snuck behind the Sabres' defense and scored off an outlet pass by Jonathan Huberdeau. Hoffman then added the tying goal with Florida's net empty and Johan Larsson trying to defend without a stick.

"I think we have to stay aggressive," Okposo said. "I thought we just sat back a little bit. We didn’t have as many shifts in the offensive zone and obviously that’s going to happen. You tend to sit back when you have a lead. We just have to find a way to continue to play our game and continue to stay aggressive when we do."

"We’ve had a couple of ups and downs through these five games, and I think that’s definitely one thing we can learn, just manage the game when we’re up 2-0," Zemgus Girgensons added. "Just kind of finishing the job and getting the win in regulation."

The Sabres simply stopped following their game plan in the third period. Breakout passes weren't as crisp; they were chasing the puck in the defensive zone and spent little time in the Panthers' end. However, the first 43 minutes of this game provide a solid blueprint for Buffalo.

Following an ugly start to the game, the Sabres peppered Bobrovsky with shots and controlled the puck in the offensive zone. Their energy line — Okposo, Larsson and Girgensons — again led the way. Girgensons drove to the net to create a scoring opportunity midway through the first period.

Moments later, Jeff Skinner was stopped from in front of the net. Two of the Sabres' four power-play shots were rebound one-timers by Okposo and Victor Olofsson, both of which were turned away by Bobrovsky.

"He played a heck of a game," Okposo said of Bobrovsky. "His legs were kind of all over the place. He played a great game, and we did stick with it. We generated some momentum in the first, carried it over in the second and were able to pop a couple. Credit to him for playing a good game."

The energy line broke through with 31 seconds left in the second period when Okposo drew two defenders to the right-wing circle and dished a pass to Larsson, who fired a wrist shot into the net for a 1-0 lead. Marco Scandella then pushed the lead to two at 2:02 into the third period on a pass from Okposo.

The Sabres rank second in the National Hockey League in goals (20) and 12th in shots per game (33.2) through Friday. Each of their forward lines contributed against Florida, though Larsson's was on the ice for both goals in regulation. Additionally, their defensemen have fared better in the defensive zone so far this season, particularly in cleaning up second-chance opportunities.

Krueger and his staff will dissect another ugly third period to find any parallels, and they will have one practice prior to hosting the Dallas Stars for a Monday matinee. All involved acknowledged there are mistakes to clean up, however, the Sabres expressed confidence in their ability to beat anyone when they are at their best.

“First of all, we know that when we stick to our game plan, we win," Ullmark said. "We play a very good hockey game. Are we going to win every game? Probably not, but we have a very good opportunity to do it as long as we stick to the process and stick with our game plan.”