Ricardo Rivera could appreciate the wonder of it all. He sat last week, feet dangling, on an outlook by the turret of the Emerald Channel intake. A few people in a passing motorboat idled the engine and looked up in astonishment at Rivera, atop one of Buffalo’s most visible yet least-accessible landmarks.

The round brick-and-stone structure is surrounded by water, at a point where Lake Erie squeezes together its great shoulders and muscles toward Niagara Falls. The intake, maybe three stories tall, sucks in the 70 million daily gallons of gravity-fed water that sustain Buffalo. It began operating in 1913, after workers spent years blasting through more than a mile of bedrock to create a 12-by-12-foot tunnel that links to the Col. Francis G. Ward Pumping Station at the foot of Porter Avenue.

For generations, the intake has inspired fascination in those admiring it from dry land in Buffalo, just as its long-closed predecessor – vaguely resembling the ruins of some Jules Verne submarine – triggers curiosity with its endless vigil near the Peace Bridge.

How many in Buffalo have daydreamed about doing what Rivera did? He climbed a metal stairway beneath a kaleidoscope of beams in the heart of the intake, then – strapped to his harness – pulled himself up to the crow's nest on a morning when the October sun raised a blue mist along the shoreline, running toward vague hills on the horizon.

“I wasn’t even going to stay here,” said Rivera, speaking of a decision made as a young man. Born in Puerto Rico, he came to Buffalo about a quarter-century ago, seeking better treatment for a son who was struggling with asthma.

Six months became a year, and then a life. Rivera is now chief electrician for the water department. Two or three times a year, he rides along when the Edward M. Cotter, the world’s oldest working fireboat, carries a handful of water department supervisors and workers toward routine maintenance at the intake.

Capt. John Sixt gently brought the Cotter alongside the intake’s dock, where pumping plant superintendent Bill Appenheimer and his crew climbed off. Up close, the structure is reminiscent of the famous line from the "Dr. Who" television series: It abruptly seems much bigger on the inside.

Rivera headed for the top, where a navigation light burns at night. His job is checking a battery – ready if a solar generator fails – while changing any bulbs that need fixing. Like his colleagues below, busy lowering six of the 12 gates within the intake, he can finish in an hour or less and be ready to go home.

Appenheimer said the city does not allow casual tours because of security concerns. Still, the place was not always so lonesome. Going back a century or so, Appenheimer said, workers once stayed there around-the-clock. Old clippings indicate two workers had to be there at all times until 1924, to operate a chlorinator.

Sean Collins, who runs Master's Barbecue in Hamburg, said his late great-grandfather, Jim Collins, told stories of routinely working at the intake for several days in a row, when he and a buddy carried food and clothes in a small boat.

Today, the only lingering signs of residency are ghostly metal lockers, some knocked to the ground, in what might have been a bunk room – not far from a battered sink, an ancient toilet and an almost fossilized pair of shoes. 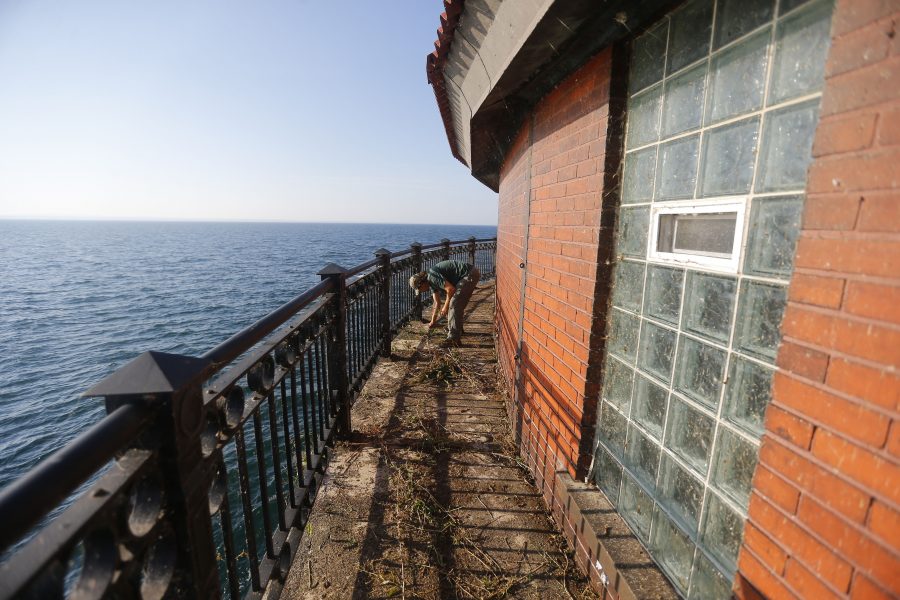 Art Cavalli cleans up the brush growing on an exterior walkway at the water intake earlier this month. (Mark Mulville/Buffalo News)

The primary tenants are fat and robust spiders, their numbers increasing the higher you climb, and the guano-happy birds that took off until we left. The circular interior has three levels, centered around water pulled in at the base. Rusting boilers recall a time when the city tried to melt winter ice around the structure, an effort forgotten with the coming of the ice boom.

The building generates some legendary tales. Robert Shanahan, a water department retiree, said he remembers when an intrepid sturgeon traveled from the lake into the intake, "scaring the hell" out of some startled divers doing work in the tunnel.

Appenheimer describes the intake as "just the starting point" for the city's water system, which makes it as meaningful as any building in Buffalo. He and his friend and colleague, general mechanic Tom Cavanagh, both said they go to work each day with a fundamental understanding.

Nothing matters more to a city than clean water.

In the 19th century, Buffalo paid dearly for the way it treated such a gift. Raw sewage went straight into the river, leading to outbreaks of cholera. According to documents at the Buffalo History Museum, that crisis triggered the use of a new intake near what is now the Peace Bridge – until Dr. Ernest Wende, a Buffalo health commissioner who made the struggle a crusade, discovered that intake was responsible for typhoid.

The city desperately needed a safer water source. Col. Francis G. Ward – the Buffalo commissioner of public works – saw an answer in the Emerald Channel, beyond that flood of 1890s sewage, where on still days even now the lake shines a distinctive green.

Who was Col. Francis G. Ward, of pumping station fame?

In the first few decades of the 20th century, a legion of everyday laborers – eight of them killed in a disastrous collapse at the pumping station – helped build a system whose magnificence reflects “a celebration of water,” in the words of Paul McDonnell, former chair of the city’s Preservation Board.

Architect Robert A. Wallace designed the intake, with an exterior walkway circling the stone base. Esenwein & Johnson, the same architects who dreamed up the iconic Electric Tower, handled the stunning detail of the pumping station, named for Ward after his death in 1915. 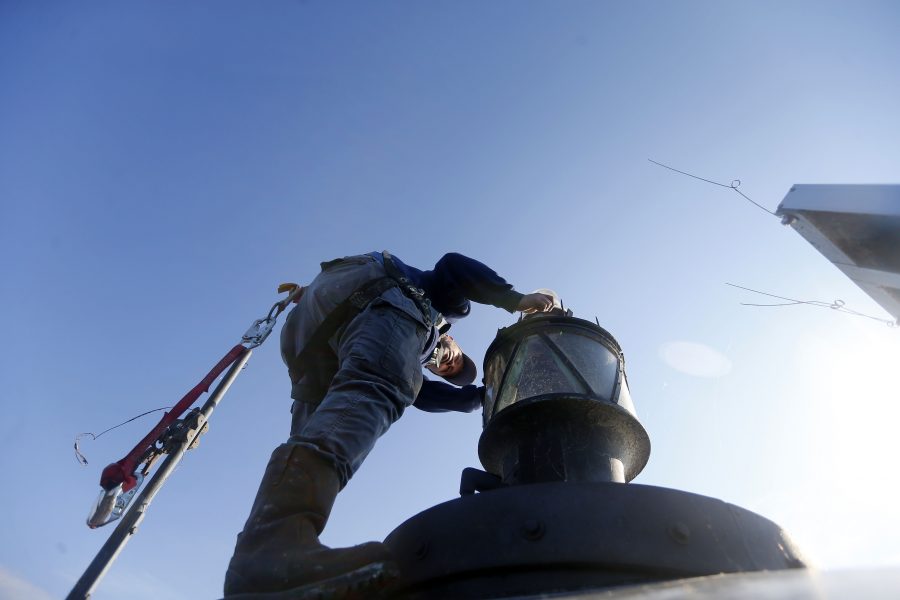 Ricardo Rivera replaces a light bulb on the top of the water intake on Lake Erie in Buffalo. (Mark Mulville/Buffalo News)

McDonnell hoped to see those buildings, including the intake, given landmark status by the Preservation Board. Amid passionate debate last January, the effort failed to win enough votes. Oluwole McFoy, chairman of the city's Water Board, said he was concerned about the potential impact on plant operations, expenses and flexibility.

"Our primary reason for being is pumping water," McFoy said. "We're all on board with the historic nature, the landmark nature, of the facility, but we're not necessarily on board about an entirely different level of approval."

Formalized or not, the power and purpose of those structures make an extraordinary statement on Buffalo's essential bond to a Great Lake, a connection only escalating in 21st century civic meaning.

In essence, they are functioning American shrines to healthy water.

Last week, you felt a touch of that reverence even among water department veterans. Cavanagh, as he always does, came along to help with lowering of the gates. Once the ice rolls in, he explained, the channel sometimes carries more turbidity, or tiny particles. He said closing six gates on the Buffalo side of the building helps in preventing cold weather cloudiness. 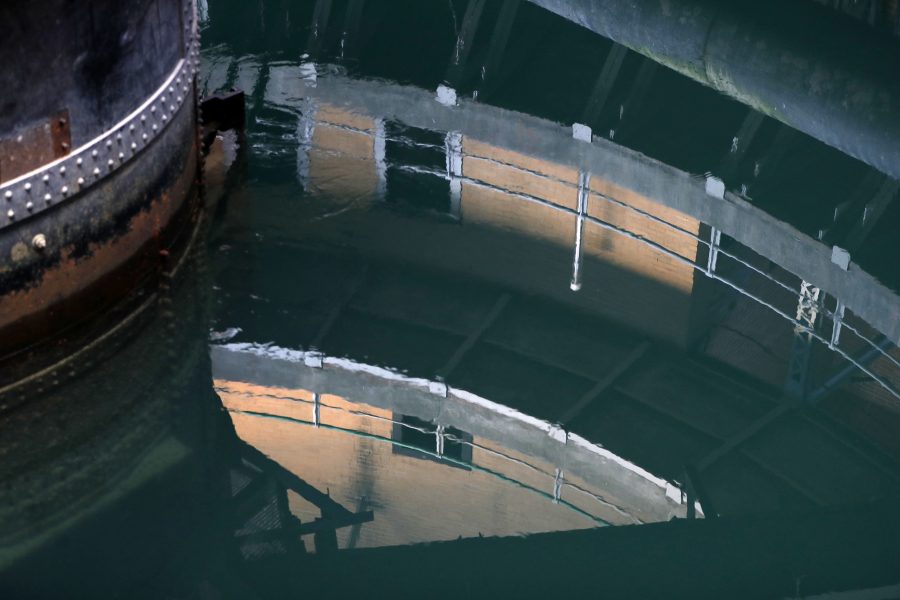 The upper levels of the water intake are reflected in the water at the center of the intake. (Mark Mulville/Buffalo News)

As for the quiet power of the intake, Cavanagh said, "I like old things." Appenheimer recalled growing up in Black Rock and Riverside, where he probably saw the building 1,000 times as a kid without ever thinking he might someday walk inside it.

The general reaction to the almost primal atmosphere was summarized by Carol Schmidt, a member of the Greater Buffalo Firefighters Pipes and Drums, who rode along with her husband Henry as fire department guests, on the Cotter.

Schmidt, who grew up in Kenmore, marveled at the intake for many years, from afar. Once there, she wandered in good-natured disbelief. The crescendo arrived when she climbed to the crow's nest, standing alongside Rivera for a view of Buffalo that few people ever see.

"This is a privilege," Schmidt said quietly, and no one disagreed. 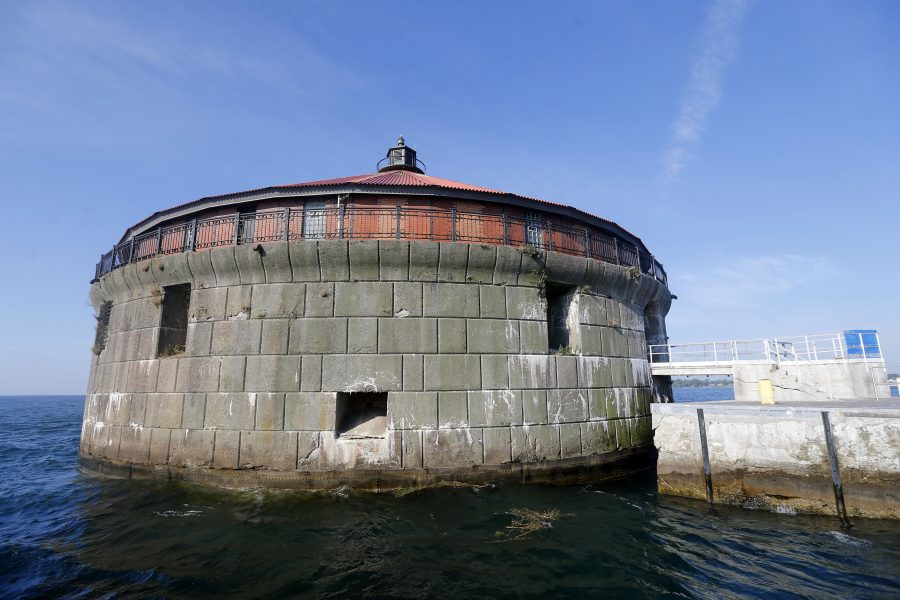