One of the toughest lessons Gurjeena Jandu has learned is that less can sometimes be more.

When superstar teammate Carissima Cutrona tore the anterior cruciate ligament in her knee on the final day of last September, cutting short her marvelous career, Jandu - the other captain for University at Buffalo women's soccer - felt responsible to keep the Bulls together after such a gut-wrenching loss.

While Jandu, a physical center back who'd started every game of her career, had sound intentions, the pressure she put on herself backfired; her individual play slipped - despite scoring a career-high 12 points - and so did UB's results, punctuated by a 5-0 stomping against eventual Mid-American Conference champion Bowling Green on home turf.

The Bulls finished the season 2-6 without Cutrona and fell in the first round of the Mid-American Conference playoffs.

Thankfully for Jandu, though, the captain still had her senior year ahead, a chance to recover from the mental and emotional drain of the 2018 season and work with the team's coaching staff - head coach Shawn Burke, associate head coach Casey Derkacz and new assistant Brianne Casey - to adopt a fresh approach. 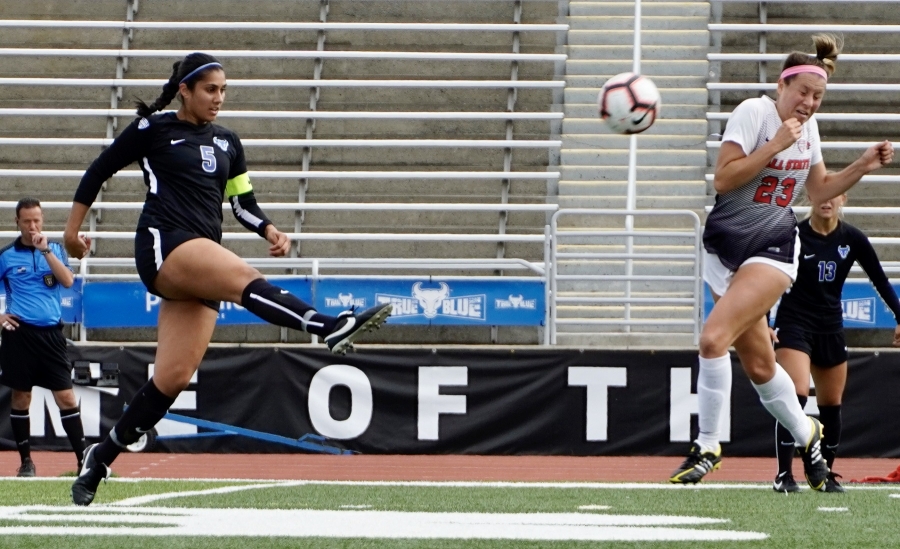 "When Carissima went down injured, [Jandu] tried to do it all, she put the weight of the team on her shoulders and I think her play was affected because of that," Burke said.

"Now, she's come in with the mentality that, yeah, she's a leader, but she knows she needs to be the best version of her. We'll go as far as she'll take us - she's that good of a player. She's delegated responsibility and knows she can't do it herself."

Junior co-captains Marcy Barberic and Gianna Yurchak have supported Jandu - who's started 69 consecutive games - significantly this year, almost to the extent of an "offensive coordinator/defensive coordinator" split like you'd see in the NFL.

"I definitely think I've grown in my leadership skills; I know I'm trying to have other people step up, too," said Jandu, who hails from nearby Mississauga, Ont. "Marcy and Gianna ... [are] going through the role. That takes a lot of pressure off me; I'm able to organize more in the back and they focus more on the forward. I think growing younger players into leadership roles makes it a lot better when everyone is working together."

[Related: 2016 profile on Carissima Cutrona, who had a tough early path of her own] 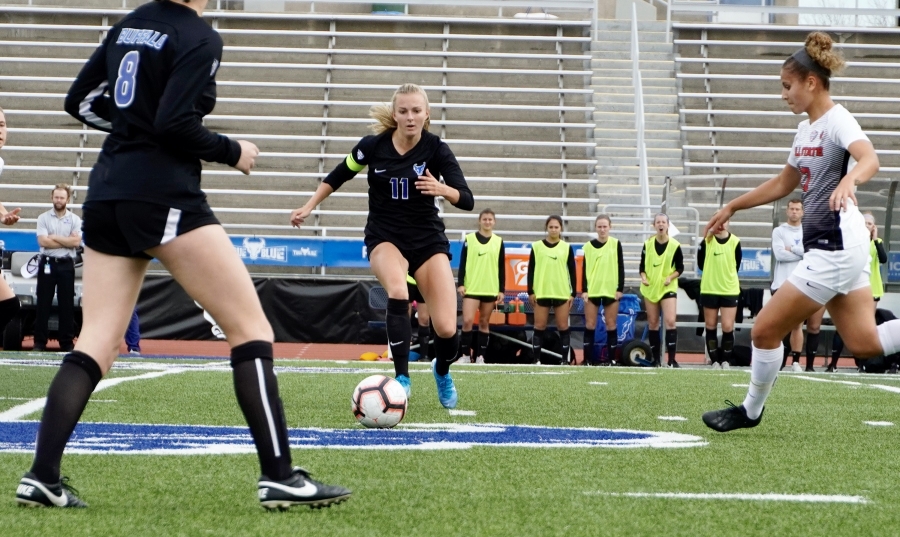 Marcy Barberic, facing the camera with the ball, is one of two other captains on UB's roster. (Ben Tsujimoto/Buffalo News)

That sense of delegation and mature sacrifice of responsibility has helped Jandu recapture the form that made her an All-MAC first team selection as a sophomore and an All-MAC rookie team pick the year prior. She dropped to the second team last year, but individual awards will ultimately pale in comparison to lessons learned from tough situations.

"You have to just keep playing no matter what happens - whoever you have on the field, you gotta go with it," said Jandu about last season's turning point. "Adversity happens, injuries happen. I think we just need to overcome it and do the best we can."

The adversity didn't end last November, of course; new year, new problems, one might say. The Bulls had beaten local rival St. Bonaventure every year Jandu had been on campus, and these Big 4 match-ups matter, especially in local recruiting. To varying degrees, Niagara, St. Bonaventure, Canisius and Daemen have all had success, along with UB, in plucking from Buffalo-based premier clubs as the talent has improved immensely over the last decade. 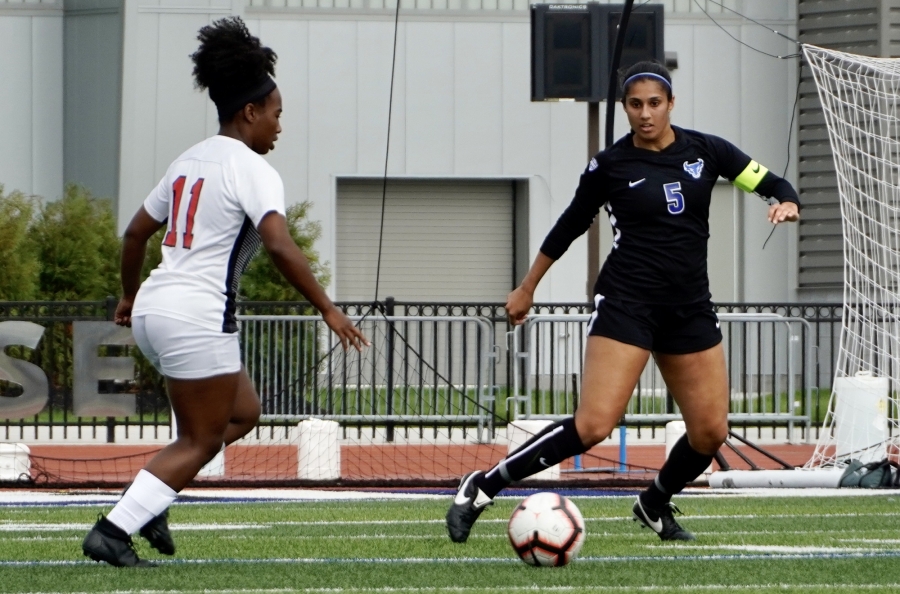 In Olean on Aug. 30, the Bulls pummeled the Bonnies in possession, shots (18-3) and corner kicks (6-0), but still fell, 1-0, on a header from a set piece that resulted from a careless Jandu foul 40 yards from goal. To make matters worse, the Bulls stood dejected and watched elated Bonnies players share a raucous embrace with their fans, who came out in droves, after the game.

When asked two weeks later how much the loss to St. Bonaventure stung, Jandu instead saw it as a motivator. "It was a little bit of a wake-up call for us," she admitted.

"They took that [loss] as hard as the staff did," Burke added. "They have a lot of pride in that they feel they should dominate the Division I programs here in Western New York."

[Related: How the Big 4 women's teams looked before the 2019 season]

The Bulls responded well, avoiding defeat in their next four matches (3-0-1), including a 1-0 blanking of Niagara in which Jandu stood tall as UB killed the game off. Coordinating the defense has actually had its own set of challenges this year, though, even beyond the upset against the Bonnies.

Building off a system change implemented in the spring, Burke has tried to play more often with three in the back, although that strategy has often reverted to a standard back four depending on the opponent and in-game situation.

Tinkering with the defense's setup can be a challenge for center backs in spacing, communication and marking, but given the training and individual experience, Jandu, Ford and the third CB, whether it's Abbey Callaghan or Adrianna VanCuyck, are well-versed enough to make it work when needed.

The approach is less risky than it might sound, too, as Carley Zoccali and Hannah Callaghan are both defensive-minded holding midfielders adept at winning 50-50s and shielding the back three; they can keep the ball if necessary, too. The formation also allows the Bulls to push more numbers forward and attack the opposing defense in different ways, whether it's overloading one side or pressing higher on the wings. It's one reason why UB's attack hasn't suffered drastically after Cutrona's graduation.

After downing Toledo in the MAC opener, the Bulls suffered three consecutive conference losses - all by one goal - until Barberic's brace and a gritty game-winner from Tess Ford produced a crucial win over Kent State on Oct. 10 to stop the slide. Jandu played a role in Ford's 86th-minute winner, slotting a pass through traffic to Taylor Caridi, who put the initial shot on goal before Ford tapped in the rebound.

Check out the sights and sounds from tonight’s 3-2 win over Kent State! 🤘🏻#UBhornsUP | #WeAreOne | #CARE pic.twitter.com/6BUvIr6Xju

Even after beating the Golden Flashes and proving the offense could hang in a high-scoring tilt, Jandu and the Bulls have little room for error as they navigate the final six games. But if someone is prepared to handle the present trouble, it's the toughened center back, whose grit, responsibility and maturity will be remembered alongside her individual accolades.