For its first decade, Soho was a Chippewa nightclub, straight up. It served as much food as a liquor license required.

The most nutritious mouthful in the place might have been a shot of Jägermeister, which does have 56 herbs and spices, after all.

In 2011 Jay Manno and partners decided it was time to shift focus to the next generation of customers, people who preferred a square meal before getting their drink on.

Cubes of truffled Parmesan tater tots were just one of the snazzy touches at the newly upscale Soho Burger Bar, with signature patties comprised of a custom beef blend. 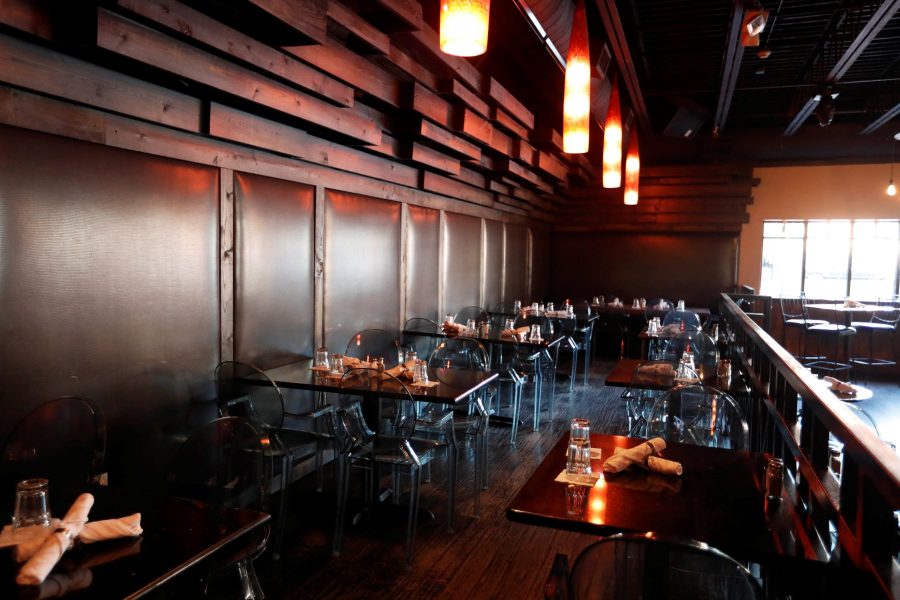 By the end of 2017, after other specialists elbowed their way into the burger lane, Soho struck out on its own again. Now it aimed to do double duty: family-friendly restaurant that turns nightclub after people who have to be at work in the morning finish eating. Thus Soho is the sort of nightspot that features both a DJ booth and a children’s menu.

The restaurant is built into the streetscape at Chippewa and Franklin, kitty-corner from Manno’s upscale Italian hit Frankie Primo’s, and across the street from Bacchus. A second-story party deck with its own DJ nest and a roomy first-floor patio provide prime perches for observing Chippewa’s bustle.

The menu is broad but not deep, two pages and a specials card, with a little something for everyone.

Chicken and white bean chili ($8), a regular on the soup rotation, hit the spot with chunks of chicken breast in a thick beany broth with a fiery chile backbone. Halfway to gumbo, this could have been dinner with a hunk of bread.

Grilled chicken tacos ($13) disappointed with twin tacos of grilled chicken breast in corn tortillas with lettuce, guacamole, shredded cheddar, salsa and jalapeños. The lack of grilled flavor, room temperature food, and the proximity to Mighty Taco made this one sting a little. 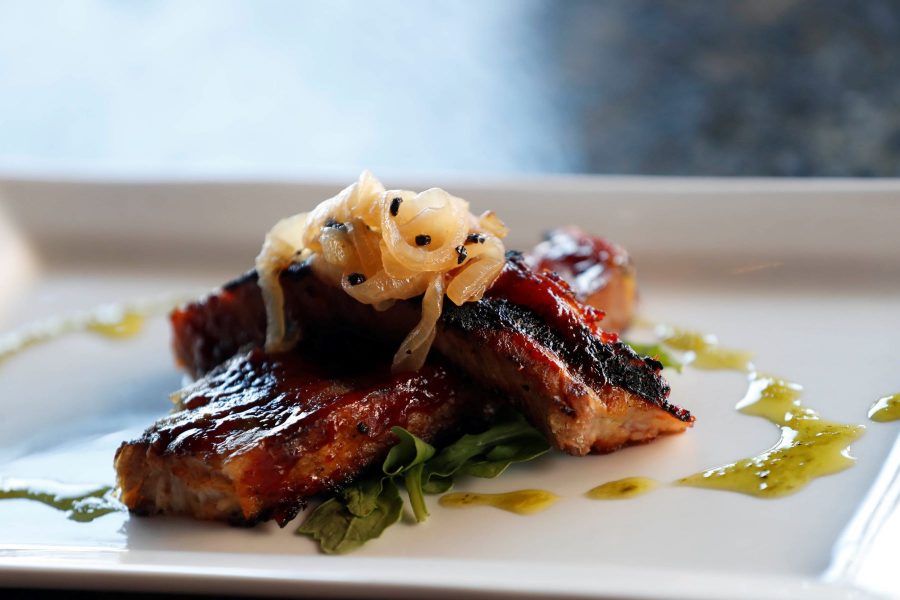 Mini pork shank with cheesy grits and mango salsa ($15) had two pieces the size of chicken drumsticks, sold elsewhere as “hog wings.” They were tender, even if the chipotle flavor proved elusive, and the fresh-cut mango salsa provided a welcome burst of tropical excitement. Pity that the baked grits slab didn’t smack of cheese.

Housemade bacon with ancho glaze and sweet onion marmalade ($12) was satisfying on multiple levels. The thick pork slice was fork-tender, but crisped up on a griddle. Slightly smoky but fully rich, its natural sweetness was amplified with caramelized onions.

Shrimp tempura with sriracha aioli and pickled vegetables ($15) was well-executed fried shrimp setup, with spicy mayonnaise and an herby green sauce to play with, alongside pickled carrot and mango strips. Tuna tostada ($15) was a blast of tropical flavor, with slices of seared rare tuna decking out crunchy blue and red tortilla chips. A gingery fresh-cut salsa and the lively fruit of mango syrup helped make this a party on a plate. 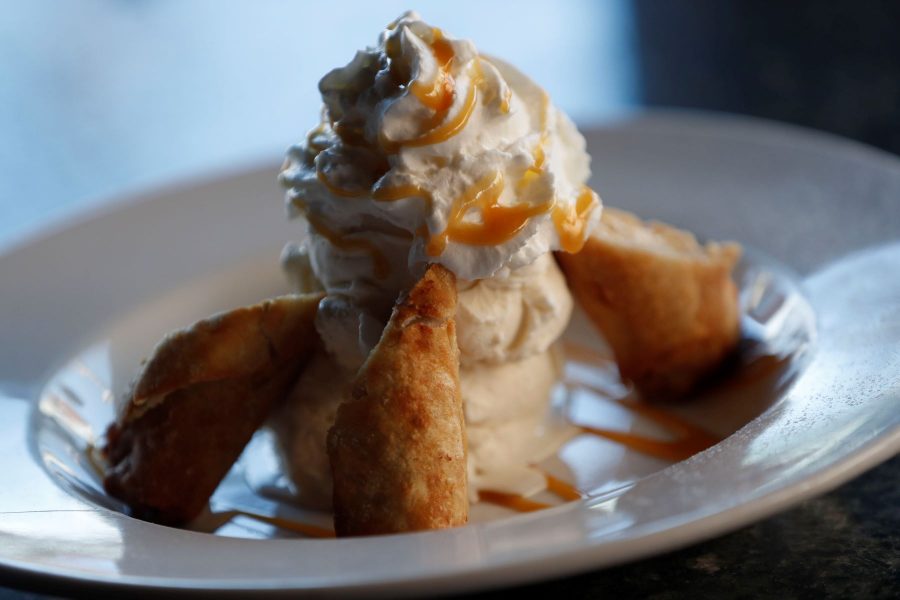 Bananas Foster cheesecake spring rolls are one of the dessert options at Soho. (Sharon Cantillon/Buffalo News)

The housemade truffled tater tots ($6) were a pleasant memory from a past visit. This time, though, they were tough and chewy, like potato gummy bears. Zucchini and corn fritters ($6), another longtime house standard, were peach-sized, three to an order, and held cores of undercooked batter.

A series of dinner entrées righted the ship, though. Blackened salmon with rice pilaf and honey-lime pan sauce ($23) offered a deftly cooked piece of fish. Its roll in a black-pepper-forward spice mixture and ride in a hot pan gave it a seared crust that yielded before the fork to a creamy interior. Savory rice, with carrots and green beans, was a comforting foundation.

Beef short rib with garlic smashed potato and snow peas ($24) was a pot roast lover’s dream. Beef that tenderly yielded to the fork, plenty of gravy and peapods still crisp after a quick sauté made a solid combination. 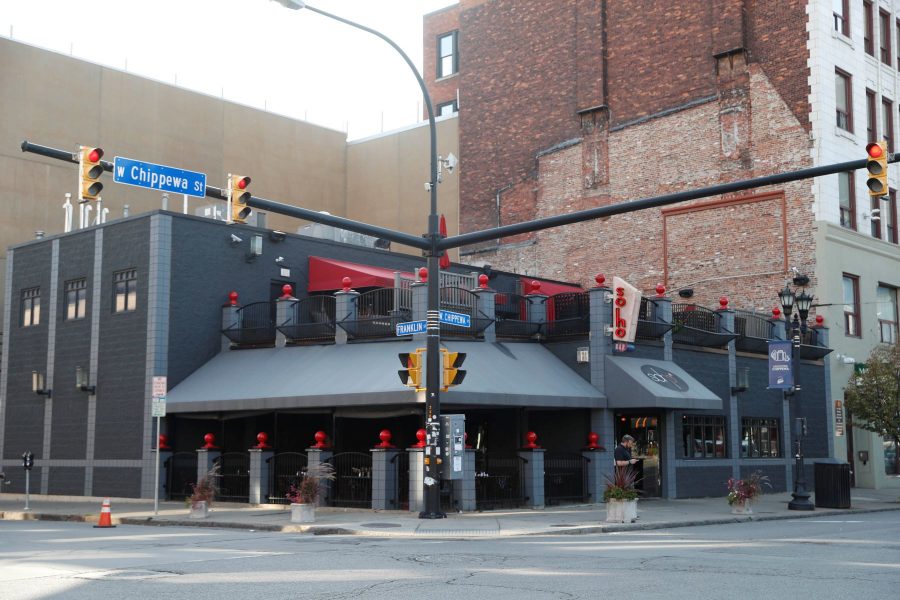 After 20 years, Soho is a Chippewa fixture. (Sharon Cantillon/Buffalo News)

Desserts included a waffle sundae ($8), with a warm-from-the-iron pastry topped with scoops of ice cream, and my favorite, a bananas foster cheesecake roll ($8) that packed the famous dessert into easy-handling batons.

Service was languid, considering the light crowd, though our server did apologize for delays between courses.

Despite some uneven cooking, Soho has been largely successful at fitting into Chippewa’s transition from a drinking street to a dining street, where families might stroll to lunch after church on Sunday. In its 20th year, Soho has grown into a restaurant that has a place for everyone at the table.