Art can be emotionally and psychologically liberating, and in those rare cases, it also can physically free the the artist. Valentino Dixon will talk about how his art helped free him from prison after serving nearly 30 years for a crime he did not commit.

Dixon's talk will be held at 7 p.m. Oct. 10 in the Burchfield Penney Art Center, in conjunction with the opening of an exhibit of his drawings. Many of the images are landscapes of golf courses, a subject Dixon picked up after a warden spotted his talent and asked Dixon if he could do a drawing for him of the 12th hole at Augusta National Golf Club. Living in a cell inside prison walls, Dixon found escape in the bright greens, blues skies and manicured natural elements of the golf course and continued to draw golf courses for years, using colored pencils sharpened down to the nub.

Dixon sent some of his drawings to Golf Digest magazine to be considered for a regular feature it ran, "Golf Saved My Life." Dixon told how he found solace through his drawings (even though he had never played golf), and of how he had been convicted of murder in a fatal shooting during a fight outside a Buffalo bar, even though another person confessed and witness accounts were conflicted.

The magazine was intrigued by Dixon's story. Together with Georgetown University law students, the magazine investigated the case and published a story in 2012 that would draw more media attention. It also drew the attention of the Erie County District Attorney's Office, which did its own investigation. In 2018, Dixon walked free after spending 27 years in prison. 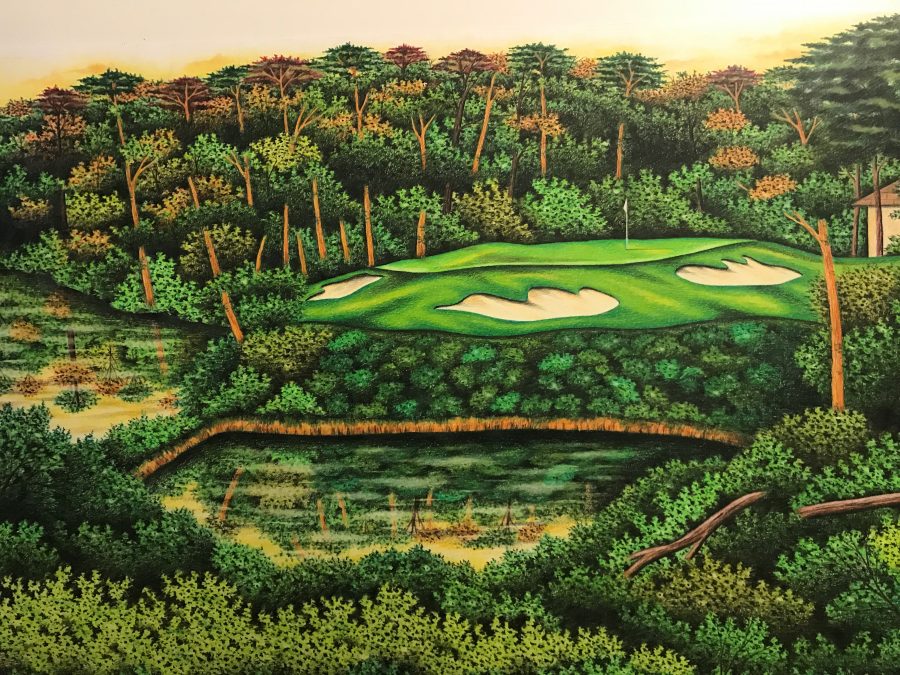 Valentino Dixon used art to help him cope during his time in prison. His work includes this acrylic on canvas of Hirono Golf Club, Japan's most distinguished golf club. (Image courtesy of the artist)

Since then he has had other shows for his art, including one in New York City. He also has played golf.

Dixon will be joined Oct. 10 by Claudine Ewing of WGRZ-TV, to discuss two issues of deep importance to him: the therapeutic effects of art and criminal justice reform. His show, "Valentino Dixon: Drawing My Way to Freedom," will be up through March 28. The talk is included with gallery admission ($10 general, $8 for seniors, $5 for students).