Scrolling through Airbnb listings is like a mini-vacation during a stressful day. When someone yells at me, I like to escape into vacation fantasies. Did you know you can rent a luxury bamboo cabana in the Andes mountains for $40 a night? Or that there's a house shaped like a giant seashell in the Caribbean? You can even rent a giant yurt in the Swiss Alps, one you'll have to wear snowshoes to reach in the winter.

But I like looking through listings in Western New York just as much as I like ogling the exotic treehouses and houseboats around the world.

Airbnb hosts in Western New York have fully embraced the opportunity to earn extra cash by letting people stay overnight on their property. In Niagara and Erie counties, there are about 2,040 people listing their rentals on the site, and they made $6.4 million this summer alone, according to Airbnb.

We've got quite a variety of listings in Western New York. Here are some of the quirkier ones, along with the two most popular.

Game day crash pad. This Bills-themed house in Orchard Park seems tailor-made for pregame partying and postgame crashing. The two-bedroom cottage is literally footsteps from New Era Field and decked out entirely in Buffalo Bills decor. The exterior of the house is emblazoned with red, white and blue Buffalos, Bills logos, a star-spangled map of the United States, and the hashtag "#BillsMafia." Inside are helmets, pennants, jerseys, posters and furniture straight out of a frat house. Reviewers gush about the location, with one saying it's "the best Airbnb in all of the NFL for tailgating!"

Lest anyone be caught unaware, the listing warns that if you rent during a Bills game, "your inside space will be private but outside will be surrounded by lots of people and tailgaters all weekend."

Which leaves us wondering how Bailey from Massachusetts ended up there.

"Funny little house. I’m not a Bills fan, but I thoroughly enjoyed my stay," he wrote in his review. 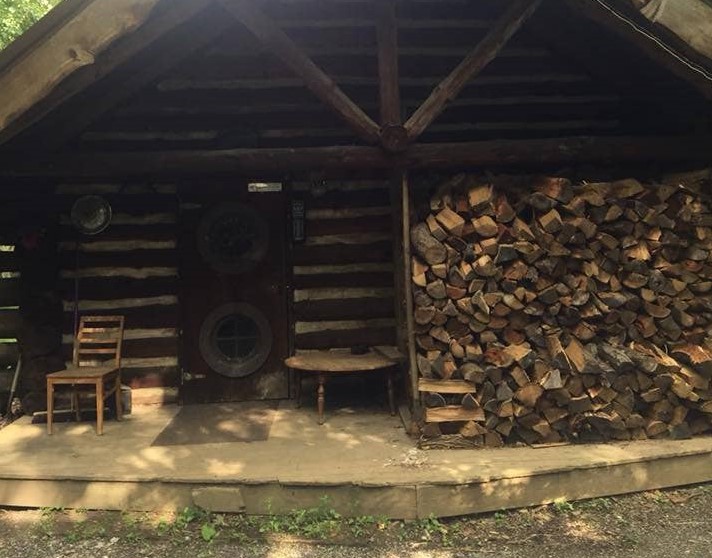 This cabin in Darien Center is a world away. (Contributed photo)

Ringnecks on Broadway. It doesn't get any more rustic than this log cabin in Darien Center. We're talking Laura Ingalls rustic. There is no running water or electric, and it has a wood-burning fireplace, propane lights and a propane stove. It's tiny, the couch and carpet look beyond threadbare and clothing storage seems to consist of some hangers stuck to a deer head mounted to the wall.

But the firewood is stacked high outside and it's surrounded by trees. An outdoors lover's paradise, it's located in the back of a more than 100-acre shooting preserve with two ponds, and hunting is permitted in season.

"Our cabin is meant for a getaway from reality and to enjoy nature!" the listing reads.

It has a five-star rating, and reviewers gush about the property and its owner.

"If there's any heaven on the earth it was there, " wrote a guest from Aurora, Ont.

She described the stay as "so peaceful" and her host as "such a gentleman" who showed her family around his farm after they checked out. 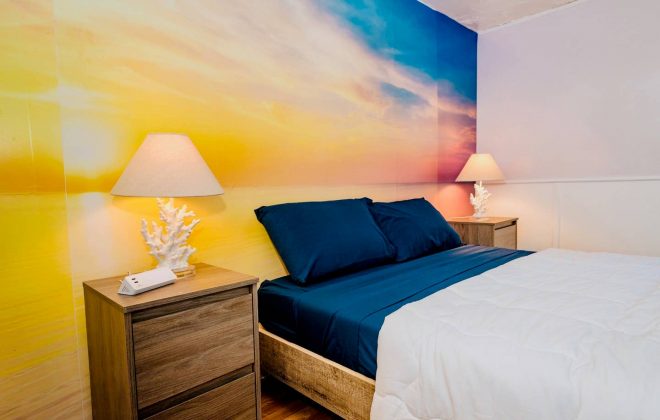 The "Beach" House is a value listing that tries to manage expectations. (Contributed photo)

The "Beach" House. This "beach" house is not named for its proximity to water (it's in Lockport), but for its decor. It features giant, wall-sized photos of sunsets and water; a seashell shower curtain, and coral-inspired lamps.

The owner really tries to manage expectations before guests book, so warnings abound. Among them: the listing photos were done by a professional, so the space might appear "larger and/or brighter than in reality." The house is old. Past guests have been "surprised" that "certain parts of Lockport" are "slightly rundown," but the neighborhood is safe.

"This is a 'budget' offering, NOT a luxury hotel," the listing reads.

The reviews are fun to read. Some are great but, when they're bad, they're horrid. One reports a neighbor with "a pitbull who can reach the carport," as well as nails and glass in the driveway. A guest from China described cutting their hand on a door patched with "barbed wire," noting it would have been "troublesome" if it had been their child who was cut instead. Another guest said the property smelled so bad they couldn't sleep, so they left to check into a hotel.

But seriously, you're getting a whole house that sleeps eight people for $19. What more can you really ask for? 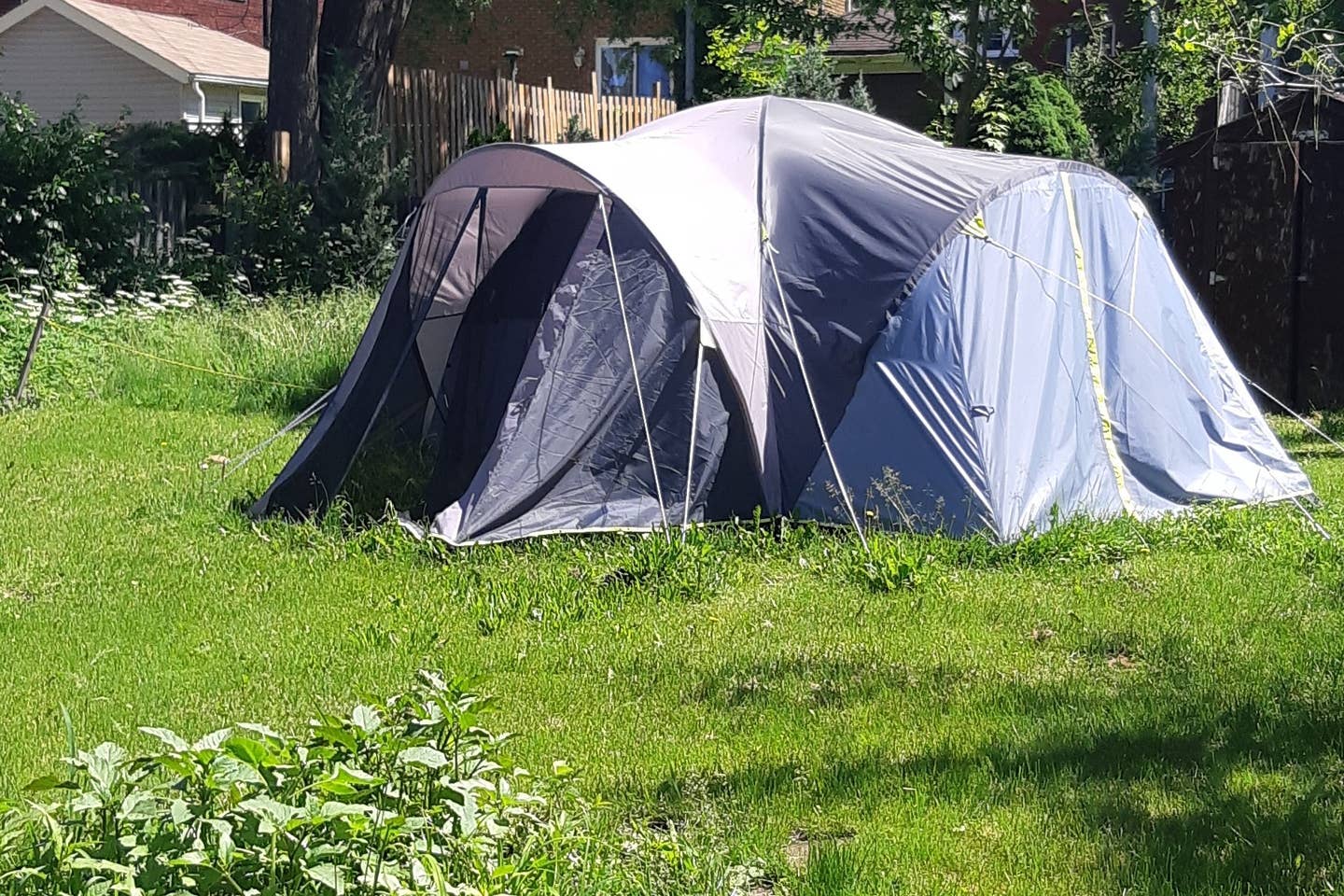 This private room is technically a tent, and technically has more than one room. (Contributed photo)

The "private room" that is actually a tent in somebody's backyard. When you search for listings in Buffalo Niagara, listings in Ontario often come up, such as this one called "Walk 2 Falls." While hosts usually try to be as descriptive as possible in their photo captions, the one accompanying this listing's main photo gets right to the point. It reads, "The tent."

Yet it's actually a quite generous offer for $11 per night. You'll have full use of their bathroom and kitchen, and can eat anything you want in their fridge. They also provide the tent, a pillow-top air mattress, bug spray, Wi-Fi and "420 accoutrements" for your cannabis-smoking leisure. Try topping that at a campground. 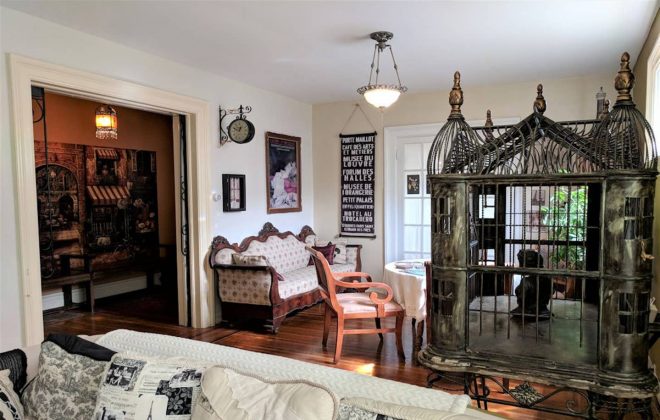 The "salon" at the French-themed Vintage Whinery. (Contributed photo)

The Vintage Whinery at the Falls. The most wishlisted listing in Niagara County is an apartment called "the Vintage Whinery," named by the artist who owns it and lives upstairs. It's meant to evoke Paris, with its curlicue wrought iron, an elaborate birdcage and a giant picture of a French street scene along the inside entrance. It has two bedrooms and strictly sleeps no more than four people.

"Guests Are NEVER allowed to sleep on the couch overnight," the listing says.

A big selling point: it's a 15-minute walk from the Whinery to the mighty Niagara Falls. The rental is rated 4.82 stars and averages $100 per night. 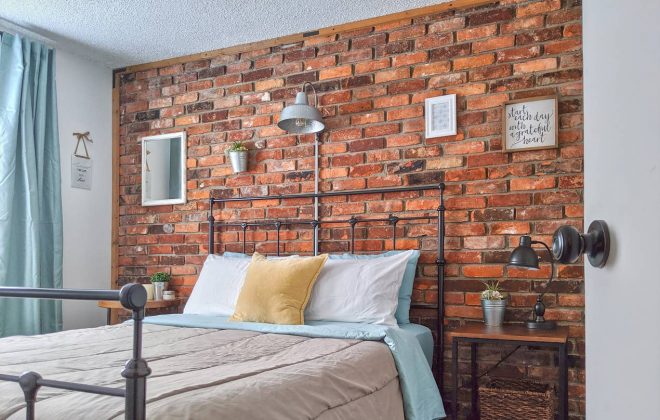 "Heart of Elmwood" is the most wishlisted Airbnb listing in Erie County. (Contributed photo)

Heart of Elmwood. This is the most wishlisted Airbnb in Erie County, meaning more people have saved the listing than any other. The naturally lit one-bedroom apartment has a queen-size bed and leather pull-out sofa, exposed brick and farmhouse-style decor. Reviewers raved about the central location and the host. It has 4.74 stars and averages $54 per night.