The cold front coming through this weekend could be the trigger to bring in trout and salmon into the streams off Lake Ontario and steelhead into the Lake Erie tributaries. Keep your fingers crossed!

Steve Brzuszkiewicz of Marilla got out Saturday between the rains and decided on Cattaraugus Creek instead of Sturgeon Point due to the morning winds. Good thing. Capt. Jim Hanley of Angola sends word that the Sturgeon Point launch is closed due to siltation at the opening. Brzuszkiewicz found a small pod of perch at 57 feet of water where he boated a quick dozen until the DEC ECO came over to check for license and life preserver. By that time, the pod was gone, and he could not relocate it. He trolled out to about 80 feet of water looking for more perch, but he was unsuccessful. He went back to the 57 feet of water to his weigh point, and found perch again. He reeled in another 21 before he ran out of salted minnows. Next time, he vows to use live bait as he missed quite a few fish using salted bait. He also spoke to a couple of boaters at the ramp. One boat had 40 perch between two guys, and they found them in 35 feet of water off the Catt. A second boat with three people came back empty handed. The key was searching and spotting fish before dropping your rig. For walleye, try 90 to 95 feet of water west of the Catt, getting your worm harnesses, stickbaits or spoons down 60 to 80 feet. Good numbers of walleye were being reported, but the bigger schools are migrating west. Bass fishermen have been tight-lipped with the Canadian Tire Open Bass Tournament set for Saturday out of Chippewa, Ontario. Look for some big catches to come to the scales, and more fish to be tagged. In the tributaries, Scott Feltrinelli with Ontario Fly Outfitters reports it is a slow go. The Catt has finally dropped and cleared, but now anglers must contend with bright sun and warm weather. Smaller tributaries off Erie have scattered fish according to Feltrinelli. Things should change very soon. We’ll end this with a salute to Capt. Lance Ehrhardt of Sassafras Charters out of Dunkirk. He died unexpectedly on Tuesday and he will be missed.

Capt. Chris Cinelli of Grand Island is reporting some of the best smallmouth bass fishing of the year in the upper Niagara River on big shiners. While that’s all well and good, Cinelli normally would be fixated on the lower Niagara River for salmon season this time of year. The salmon action in Devil’s Hole and the gorge continues to be very slow, but a few fish are being caught, according to Lisa Drabczyk at Creek Road Bait and Tackle in Lewiston. Shore fishermen are casting spoons and spinners or drifting egg sacs and skein. Boaters are strictly fishing treated egg skein off 3-way rigs. It is important to take advantage of your hits. Missing one could mean a donut for the day. There are some rainbows and browns around, too, so that helps. Bass fishing has been good in the river, especially around Fort Niagara. Crabs, shiners and tubes are working well. Some walleye are around, too. 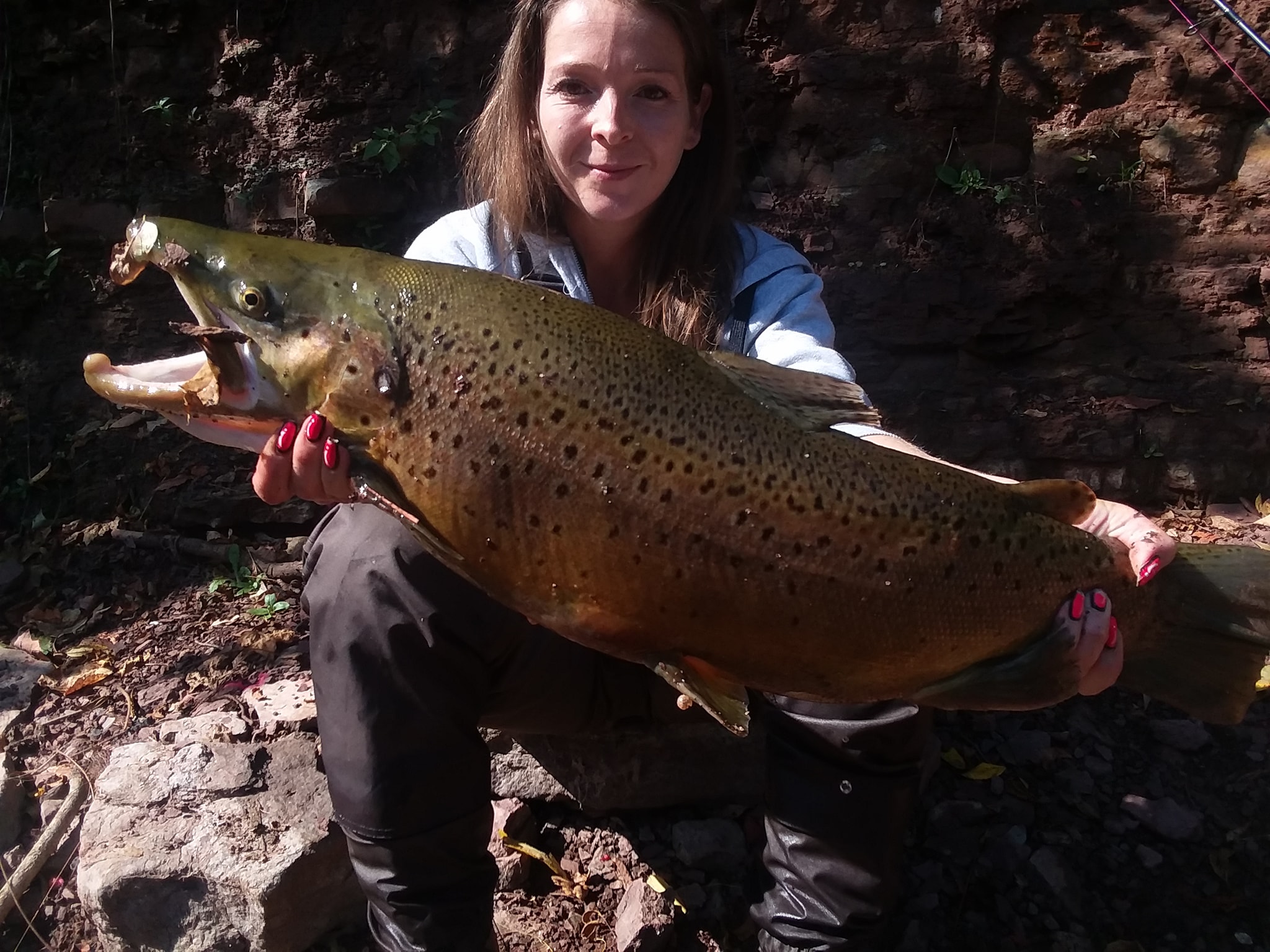 Buffy Frank of Lockport caught this massive brown trout over the weekend in a favorite Lake Ontario tributary. It was released after a quick photo. (Photo courtesy Buffy Frank)

Mixed reports coming from the piers, the tributaries and the lake. Burt Dam and 18 Mile Creek had decent action over the weekend on browns, with steelhead and salmon mixed in according to Karen Evarts at The Boat Doctors in Olcott. Egg sacs were hot over the weekend, with pink being the best color. There are fish in the creek if you want to paddle around with a kayak or small boat, fishing the deeper holes. The piers have been inconsistent according to Evarts. Firetiger J13 Rapalas have been working best, but spoons, spinners and rattlebaits will catch fish, too. Rain and cooler temperatures are expected this weekend and that should help. If you want to take a gamble on the lake, there were some reports of deep-water action for a mixed bag of salmon and trout, but no specifics on locations or depth. Pier head trolling has been slow off Wilson and Olcott. Scott Feltrinelli of Ontario Fly Outfitters reports that other Ontario tributaries to the east have had some activity, especially on the Oak Orchard River and Salmon River. However, the push of fish is slow and very late. Overall, anglers are still waiting for things to kick into gear. The St. Mary’s Archers Club will be hosting its annual Catch and Release Fly Fishing Contest Oct. 16-18 next week on the Oak Orchard River.

Musky fishing has been pretty good casting and trolling lately according to Capt. Mike Sperry at Chautauqua Reel Outdoors. Short line trolling deep diving crank baits like Llungen 22 Longs have been working well the past week. Eight- and nine-inch Leo Jerkbaits worked near the weedlines have been catching fish, too. Black, black and orange and yellow perch colors have been the best. South basin action still has remnants of this year’s algae bloom but seems to get clearer every week now. The walleye trolling bite is still on. Hot-n-Tots run off lead core line at 2-1/2 miles per hour is working. Rapalas, Hot-n-Tots, and Flicker Shads off downriggers is producing fish on the north basin, too. Remember the musky tournament going on Oct. 19. A recent media fish camp on the lake run by Dave Barus of East Aurora saw some great catches come out of the lake including a 5-pound largemouth hauled in by writer Doyle Dietz of Pennsylvania off Long Point, some chunky walleye and a decent musky.