After a very good salmon fishing season on Lake Ontario this year, shore casters, pier fishermen and small boat anglers eagerly have been awaiting the return of the mighty king. They are still waiting. So far, the salmon have not shown up in significant numbers, leaving some local charter captains shaking their heads and cancelling their salmon fishing season for this year.

“This is the worst salmon fishing season that we’ve ever seen in the lower Niagara River,” said Capt. Frank Campbell of Lewiston, owner of Niagara Region Charters. “After a great fishing season in the lake, we would have expected to see more salmon coming into the rivers and streams. My own opinion is that many of our fish are getting caught in the lake before they even make it to the river. I’ve been saying that for 10 years.”

In particular, the stretch of water from the Niagara Bar to 30 Mile Point is the primary focus for spring fishing when it comes to derbies and tournaments. In April, it’s the King of the Lake in St. Catharines. In May, it’s the 10-day Spring Lake Ontario Counties Trout and Salmon Derby, the Niagara County Pro-Am Salmon Team Tournament and the Wilson Harbor Invitational. There’s also the Don Johannes and Pete DeAngelo events, as well as the Buffalo Sabres Alumni Charity Fishing Event that puts fish in the cooler. And that’s just the start of the season. Even if anglers don’t keep the fish, we really don’t know what percentage of those fish will survive the battle in the water. There are so many factors to consider such as water temperature, how long the fight was, and how it was handled after it was caught.

Combine that with record catch rates for salmon the last two years (2017-18) on Lake Ontario, not counting 2019 because that information in not yet available, and you can start to put the puzzle together. At least a puzzle of possible suspects contributing to the lack of fish in the Niagara River. 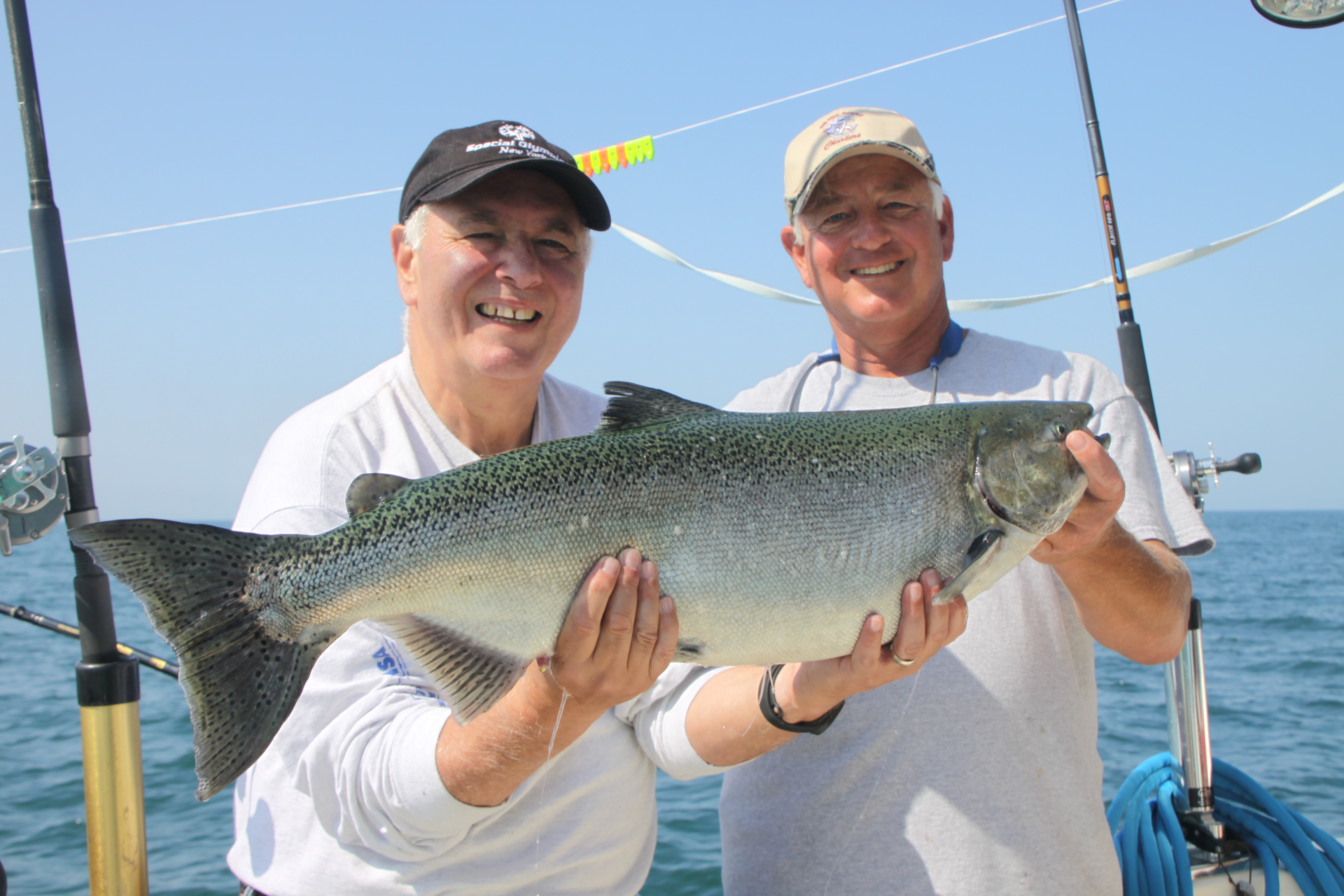 Tony Nemi of Lockport (left) shows off a salmon he caught while fishing out of Wilson with Capt. Mike Johannes of On The Rocks Charters. Are lake fishermen catching more salmon than people realize and is it impacting the salmon run this year? (Bill Hilts Jr./Buffalo News)

“Some of the captains have cancelled trips, some have cancelled their season,” Campbell said. “We’re catching a few fish, but if there are 5 to 10 boats fishing, the average might be 1 fish per boat or less. We’re not seeing any fish caught off the NYPA fishing platform and we’re not seeing any fish jumping – at least evidence that there are fish around.” On Tuesday, six fish were caught in Devil’s Hole by charters, four by Capt. Jim Gordon of Appleton and his fishing party. Not good for the other boats.

Since most of the fish that would be returning to the river would be 3-year-old chinook salmon, let’s look at what happened in 2016. For starters, the Niagara River received its full stocking target number of salmon – 75,000 kings in the pens operated at the time by the Niagara River Anglers Association; and 128,000 direct stock kings, all from the Salmon River Fish Hatchery. The Niagara River normally is one of the final locations to receive fish in the pens and for stocking due to colder water coming down from Lake Erie, thanks to the ice boom.

While some anglers speculate that receiving the fish so late could cause the salmon to be imprinted to the Salmon River, studies performed by the state’s Department of Environmental Conservation have shown that less than 10 percent of stockers could return to Altmar, where the hatchery is located on the Salmon River in Oswego County.

Unfortunately, there is no longer a fin clipping study in place to determine salmon migration patterns and to determine whether the salmon is stocked or wild. They will not be clipped in 2020 either.

The last time a study took place (mass markings in 2010, 2011 and 2013), every salmon stocked in the lake was fin clipped, in New York and in Ontario. It substantiated that wild fish is an important contribution to the salmon fishery in the lake. Approximately 50 percent of all salmon in the lake were naturally reproduced according to the study. It also verified the importance of salmon pen rearing projects along the lake versus direct plants from the hatchery. Survival rates were better than 2 to 1 when comparing the pens to a hatchery truck stocking directly into the water. 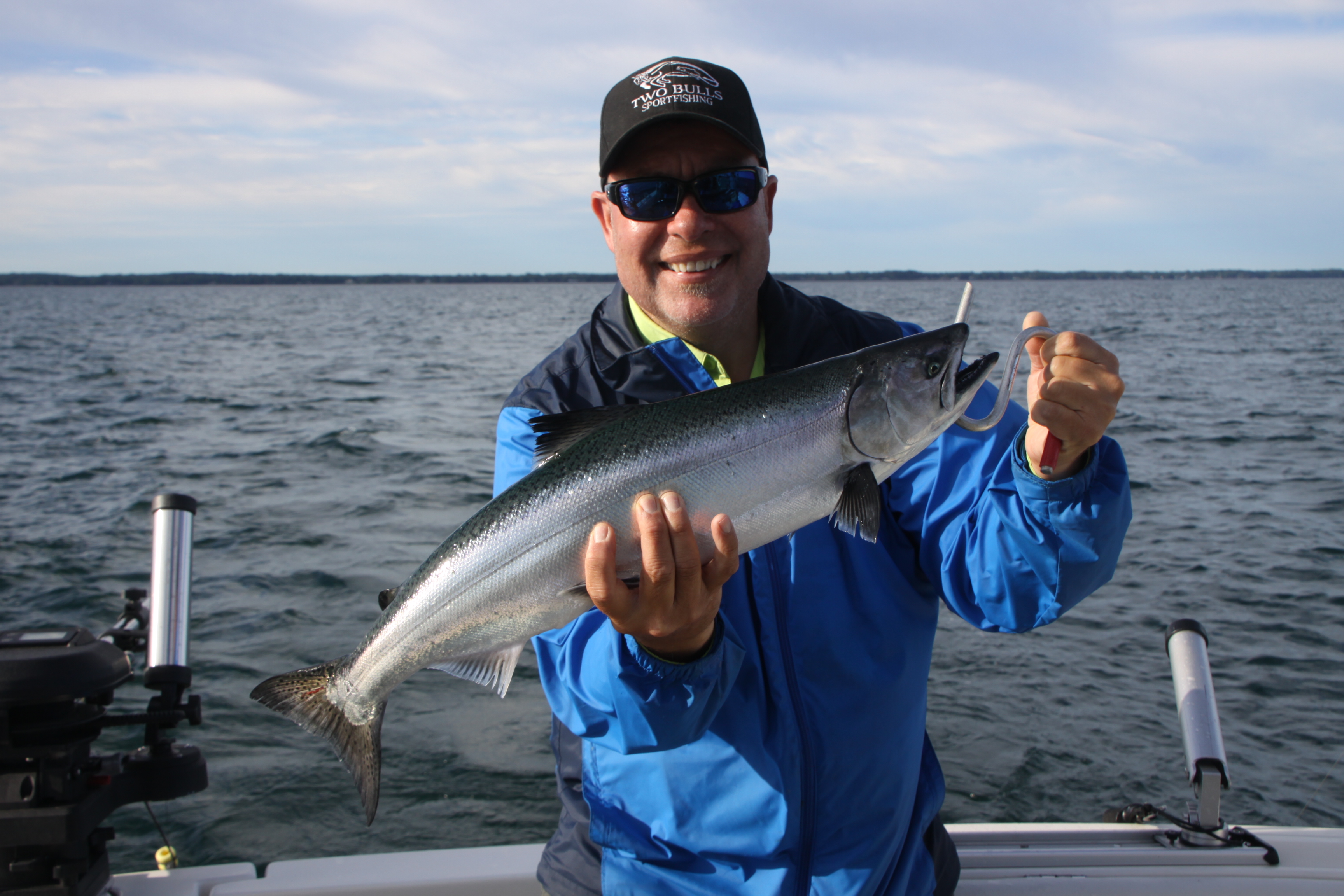 Capt. Joe Gallo of Two Bulls Sportfishing with a 2-year-old salmon. When the state conducts it annual lake creel census, the catch rate is based on all year classes of salmon. (Bill Hilts Jr./Buffalo News)

Of course, there are some unknowns when it comes to stockings. Predation from birds like cormorants are becoming an increasing problem and many wonder if the predation from larger predator fish also might pose a bigger threat than anyone realizes.

There are water issues, too. In 2017, Lake Ontario experienced its first record-high water disaster on the lake. Water was so high in the Niagara River, the NRAA could not operate a pen rearing project for salmon. It also was the first year of a 21.9 percent stocking cut for the river and along the lake, allowing for Wilson to get back into the salmon stocking effort with its first plant of 10,000 chinook (in a pen) in 25 years.

Warm water could be a factor in some streams to the east and runs could still happen there, too. However, warm water never stopped the salmon from entering the Niagara River in the past. It just ended their life cycle a little quicker. A chinook or king salmon is a Pacific salmon. They spawn and then die. That’s the circle of life for them, if they don’t get caught first.

Winds have also been blamed, with strong east winds pushing salmon out of their staging areas in September. If so, where did they go? 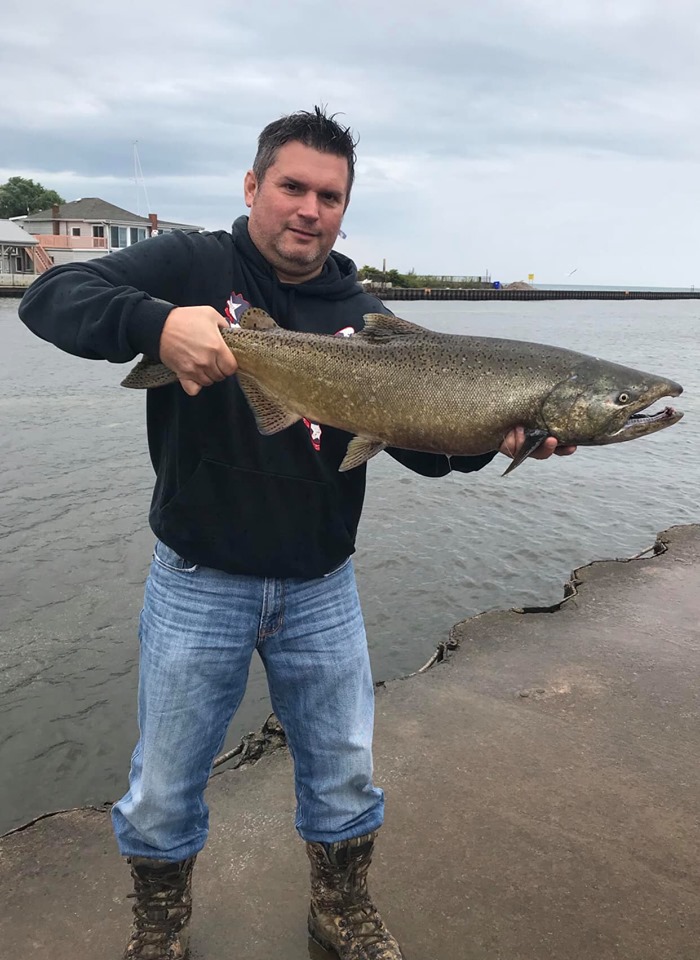 Returning salmon in the fall provide an opportunity for shore anglers to catch one of these fish, like the one shown here by Chris Walczak of Amherst. (Photo courtesy Chris Walczak)

“Ever since the Caledonia fish hatchery (south of Rochester) went offline for salmon, our fall runs have suffered,” Campbell said. “We could use our own fish culture or hatchery facility here.”

A smaller version was experimented with this year and could be one of the answers moving forward. Campbell was involved with expanding the pen rearing project in the river in 2019 to include a large tank project. Working with Mike Fox of Lewiston and Capt. Matt Yablonsky of Youngstown, the three members of the Niagara County Fisheries Development Board had success with the pilot program, and they look forward to continuing it in 2020, working closely with Region 9 DEC.

Another possible solution to help the river fishery is to look at reallocating stocking numbers along the south shore of the lake. In Ontario, the Ministry of Natural Resources took a long look at usage on the north shore and decided that they would move some stockings into high traffic fishing areas from low traffic ones. It’s something that’s been talked about here in New York at stakeholder meetings.

No one has the answers to the salmon problem yet, and it could be that the best is yet to come. We will have to wait and see.