WASHINGTON – Former Rep. Chris Collins Monday sent an email to friends and associate asking them to reach out to the judge in his insider trading case and argue for leniency.

But longtime Collins critics plan on writing to the judge, too – to press for just the opposite.

That means U.S. District Court Judge Vernon S. Broderick is likely to get radically different portrayals of the now-departed four-term lawmaker from Clarence – who recently moved to Florida – before the sentencing hearing next Jan. 17.

Collins, not surprisingly, wants people to accentuate the positive.

"It is important for us to get letters of support from those who know me best and can attest to my character and years of service and accomplishments," Collins wrote.

Asked about Collins' letter, Michelle Schoeneman – one of the co-founders of  a group called Citizens Against Collins – said a grassroots effort already was underway among the group's 3,500 members to make sure Broderick hears from Collins' critics.

"There was something going around Citizens Against Collins yesterday with regards to this, with the address of the judge, asking people to write letters, saying ... how we were just as without representation then (with Collins in Congress) as we are now," said Schoeneman, whose group bought billboards criticizing Collins even before his August 2018 arrest.

Collins, who resigned from Congress and pleaded guilty to two felony charges in the insider trading case last week, noted his change of residence in an email to friends, donors and associates. A source provided the email to The Buffalo News.

"I'm now a FL resident and will be in FL for a while as the press settles down and moves on," said Collins, a Republican who previously kept his legal residence in Clarence while maintaining homes in Marco Island, Fla., and Manhattan.

In the email, Collins also provided some insight as to why he pleaded guilty after insisting for 14 months that he was innocent. He did it, he said, in part to help his son, Cameron, who also pleaded guilty in the insider trading case last week.

"I feel like I've let everyone down, but our decision to plead guilty is the right decision for Cameron and the family," Collins said. 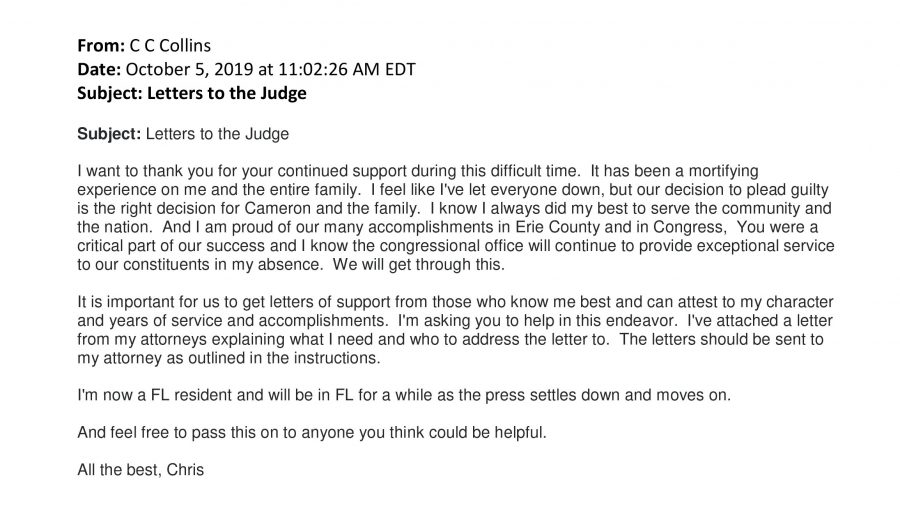 Collins pleaded guilty to conspiracy to commit securities fraud and lying to the FBI, while his son and Stephen Zarsky – Cameron Collins' prospective father-in-law – pleaded guilty only to that conspiracy charge.

They acknowledged taking part in an insider trading scheme that the then-congressman hatched in a phone call to his son from the White House lawn in June 2017.

A board member of an Australian biotech called Innate Immunotherapeutics, Collins got an email during a White House picnic from the company's CEO. The email noted that the company's only product, a multiple sclerosis drug, had failed in clinical trials.

Knowing the news would devastate Innate's stock price, Collins called his son, who started dumping his Innate shares the next day, before the company announced that its only product was essentially worthless. Cameron Collins also told Zarsky and others the inside information about Innate, and Zarsky dumped his stock, too.

The former congressman acknowledged in court last week that he knew what he was doing was illegal when he gave his son that stock tip, but he struck a much different tone in his email to his friends.

"I know I always did my best to serve the community and the nation," he said. "And I am proud of our many accomplishments in Erie County and in Congress. You were a critical part of our success and I know the congressional office will continue to provide exceptional service to our constituents in my absence. We will get through this."

For now, though, Collins acknowledged that he needed his friends' help before his sentencing. The plea agreement Collins signed with prosecutors says he will not appeal a sentence of up to 57 months in prison, but under federal sentencing rules, the judge could give Collins either more or less time.

Hoping that he will get a lesser sentence, Collins attached to the email a form letter from his lawyers with advice on how to plea for leniency.

Collins doesn't want such letters to just come from his closest associates, either.

"Feel free to pass this on to anyone you think could be helpful," he added in the email.

It's common for white-collar felons to seek such letters. For example, Buffalo developer Louis Ciminelli collected numerous letters of support before a federal judge last year sentenced him to 28 months in prison.

But the judge in the Collins case may get an uncommonly large number of letters from Collins' former constituents in New York's 27th Congressional District, a stretch of suburbs and countryside between Buffalo and Rochester.

Along with the nascent social media campaign among members of Citizens Against Collins – now called "NY-27 for Real Leadership" – local progressive blogger Alan Bedenko also tweeted out the judge's address.

"I’m still working on my letter to the judge. But I’m not asking for leniency," said Katie Webster, a Clarence mother of three and longtime critic of Collins. "This is just another cowardly act by Chris Collins."

Schoeneman said many Collins critics will write to the judge knowing that it will only do so much good.

"He will pay his debt to society through his prison time, but he will never be able to pay for the damage he did to NY-27 through poor and absentee leadership," she said.