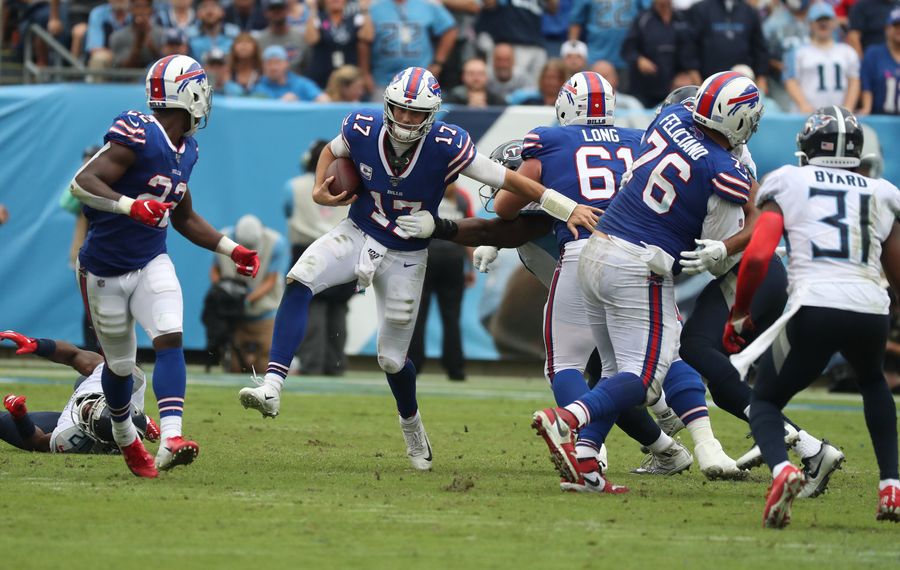 The Buffalo Bills got at least a glimmer of good injury news Monday.

After losing five starters at one point during Sunday’s 14-7 win over the Tennessee Titans, coach Sean McDermott started his Monday press conference by announcing that for at least one of them – center Mitch Morse – the update was positive.

“He’s moving in the right direction with his ankle,” McDermott said. “We don’t think it’s all that bad at this point.”

Morse played just 24 snaps Sunday before going out in the second quarter. The Bills shifted right guard Jon Feliciano to center and inserted Spencer Long in Feliciano’s spot in response.

Morse remained in uniform for the remainder of the game. When the Bills lost rookie right tackle Cody Ford in the third quarter, that forced their last healthy offensive lineman – undrafted rookie Ryan Bates – into the game. Morse would have been able to go back into the game on an emergency basis.

“What a job Spencer Long did. What a job Bates did – that's his first action really in a live NFL game in terms of regular season,” McDermott said. “To go out there on one side of the line to have both of those guys and for them to execute at a high level says a lot about what they did in terms of their preparation.”

McDermott had less of an update on his other injured starters. Defensive end Trent Murphy and Ford are in the NFL’s concussion protocol, while linebacker Matt Milano has a hamstring injury, the severity of which was not updated by McDermott. The fifth injured starter, safety Jordan Poyer, returned to Sunday’s win.

With the sudden rash of injuries, the bye week arrives at a favorable point on the schedule.

“We've been able to sustain success early on and withstand some of the injuries we incurred early in the year,” McDermott said. “Now we came out of this game a little banged up as well – even more so banged up. So we've got to get healthy. It's at a good time for us to get some rest and offers a chance for us also to evaluate where we are and where we're trying to go and some of the challenges we've had and how we plan on solving those challenges.”

Wide receiver Robert Foster missed his second straight game Sunday with a groin injury. McDermott said Foster will stay in Buffalo during the bye week to continue to rehab.

The additional week of rest should help rookie running back Devin Singletary and slot cornerback Taron Johnson return to the lineup in Week 6. Johnson has missed four straight games with a hamstring injury, while Singletary missed his third straight Sunday with a hamstring injury of his own. Knowing that they would each get an additional two weeks of recovery time by sitting Sunday factored into the Bills holding them out, McDermott said.

Even without them, the Bills moved to 4-1 in the season. They’ll enter Week 6 in possession of the first wild-card spot in the AFC.

“Our focus really is on what happens inside these walls. Just focusing on one week at a time, continuing to grow as a football team,” McDermott said. “That's all we can control. We're 4-1, and a whisker away from being 5-0. The fact is we're 4-1 with a lot of room for growth. A lot of good progress to this point in the season and a lot of good football left to be played, so I give credit to the players and staff. We've got to continue to work and grow as we move forward.”

The Bills’ four wins have come by a combined 26 points. Three of them have been within one possession.

That mirrors what’s happening around the league. Entering Monday night's game, nine games in Week 5 were decided by seven or less points. That makes 42 such games through the first five weeks of the season, which is tied with the 2006 season for most in league history.

“I know this about our team, that we're mentally tough,” McDermott said. “I've said this for a couple weeks now – they're a physically tough group to win games the way we've won them. That's kind of the nature of the NFL, too, very few blowouts. So you've got to be able to play well down the stretch in the fourth quarter. I think we've shown that we can do that. We've got some more areas, though, that we need to get cleaned up and pay strict attention to this week.”

Some numbers to consider at the bye week, courtesy of the Bills’ PR department:

1. The team has limited opponents to 17 points or less in six consecutive games, the longest stretch by the team since 2002-03. Additionally, the defense has held opposing quarterbacks to less than 250 yards in an NFL-best 13 straight games. That’s also the longest streak since a 14-game span over 2002-03.

2. Running back Frank Gore has 333 rushing yards in five games, the most ever for a player 36 or older in that time span.

Allen also has a fourth-quarter passer rating of 122.9 this season, which is fourth best in the NFL among quarterbacks with a minimum of 25 attempts, behind Houston’s Deshaun Watson, Detroit’s Matthew Stafford and Atlanta’s Matt Ryan.

“I thought it was a well-rounded game outside of that one play,” McDermott said Monday of Allen’s performance, referencing a third-quarter interception as the negative. “I thought he was accurate, he got the ball out on time, he understood the look the defense was giving him pre-snap, and that speaks to his preparation. I thought from an ability to use his feet timing wise on that as well, he was in and out of the pocket on time, and then he checked the ball down when he needed to check the ball down.”