Vivian Maloney from Lackawanna wasn't sure how her 4-year-old son would cope with the loud music, excited shrieks of other children, and the sight of adult-sized dancing Linkimals characters.

But she brought Cameron Cosme and her two other children to the free Fisher-Price "Let's be Kids" event Sunday in the parking lot of the Walmart Supercenter on Transit Road in Depew.

Cameron, who has autism, loved it.

"He's having a blast here," said Maloney after she and Cameron took a few spins on a large Bounce & Spin puppy and then he and his brother, Michael Montanez, 9, drove a road course in a battery-powered kid-sized Jeep Power Wheels. Her daughter, Naleyah Montanez, 7, spent her time jumping on safe spots on a large "The Floor is Lava" Rescue Heroes bounce platform.

The "Let's Be Kids" pop-up event was one of eight across the country, mostly in large cities like Atlanta, Los Angeles and Orlando, said Jody Gavin, global marketing manager of Fisher-Price. The company planned the local one because it's "in our hometown," she said, referring to the company's East Aurora headquarters.

"The point is to invite parents back into the world of childhood, to be able to experience it with their kids," said Gavin. "All of the activities we have going on here today are supposed to be fun for parents and kids together."

Adults and children teamed up to turn the pages of a 6-foot-tall book spread out on the ground, titled "So, You Have Parents!" written from a youngster's point of view about puzzling grown-ups who, for example, can have all the candy they want but only have one piece at a time. 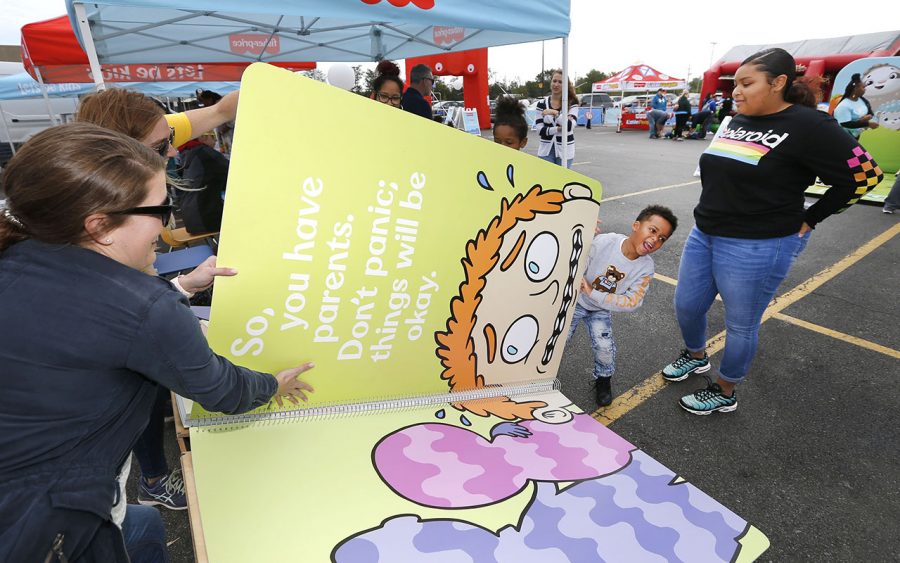 Sprawling right across the book to use his fingers to sound out giant words was August Rodrigues, 5, who came from Niagara Falls with his mom, Ashley Colon, brother Jaiden Silmon, 11, and sister Leyla Colon, 14. Little August, a model for Fisher-Price, gave the big book a bright smile and thumbs-up.

Jovann Paige Jr., 14 months, was not intimidated by the adult-sized Linkimals dancing puppy, who led dancers of all ages on a disco floor. His mother, Kristen, was working at the event, while her husband, Jovann, who also shares a birthday with his boy, enjoyed the games and activities. "He likes to dance because we dance at home," Kristen Paige said.

Kids of all ages crowded into a real firetruck refitted as a Rescue Heroes vehicle, complete with a screen on the side showing some of the YouTube videos of the toys.

When the families were occupied elsewhere, perhaps operating the Batmobile or going wild in the Little People Barnyard Petting Zoo, Orlando Santiago, lead brand ambassador, took a ride on the Bounce & Spin puppy himself. "I'm trying to get more adults to try this," he said. "I'm telling them that that's what this is for."

Although many of the toys were high-tech, a fair number of youngsters were drawn to a low table of classic chalk sticks. Hopscotch boards, a large Batman symbol and names and drawings quickly covered the asphalt parking lot.