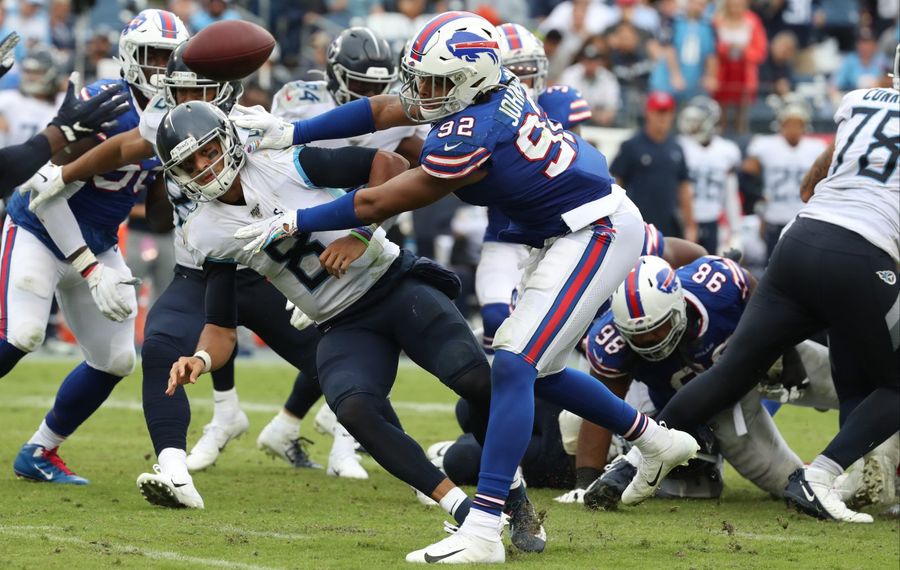 It came alive at the end. Taking over with 4:12 left in the fourth quarter, the Buffalo Bills were able to run out the clock thanks to the ground game. After Frank Gore was stopped for a 1-yard loss on first down, T.J. Yeldon ripped off an 11-yard gain on second down to move the chains. Gore then went for 11 yards and followed that with a 19-yard gain. After the two-minute warning, Gore had gains of 4 and 3 yards. On third-and-3, quarterback Josh Allen executed a perfect bootleg to pick up the game-clinching first down. Gore finished the game with 14 carries for 60 yards against a very good Tennessee Titans defensive line. He had just 16 yards on six carries in the first half. Allen added 27 yards on 10 attempts, including two kneeldowns at the end of the game. He took a big hit early in the game, but did a good job of sliding after that. Yeldon gained 15 yards on two attempts, while wide receiver Andre Roberts picked up 7 yards on the go-ahead touchdown drive. As a team, the Bills had 46 rushing yards through three quarters. They gained 52 yards on the final drive before Allen’s kneeldowns. With two reserve offensive linemen in the game, that was an impressive showing.

Allen threw another maddening interception, but did a lot of good in completing 23 of 32 passes for 219 yards and two touchdowns. It’s the first time in his career Allen has had a completion percentage better than 70 in a game – he finished at 71.9%. His 98.3 quarterback rating was also his best of the season. Duke Williams provided a huge boost, catching four passes for 29 yards and the go-ahead touchdown in the fourth quarter of his NFL debut. Before that touchdown, the Bills got to the red zone on a 46-yard completion to Isaiah McKenzie. That came on the quick-pitch play that McKenzie scored on against the Giants. Tight end Lee Smith, a Tennessee native, caught an 8-yard touchdown pass to open the scoring in the second quarter. John Brown continues to look like a legitimate No. 1 receiver. He had five catches for 75 yards. He has 390 receiving yards through five weeks and is on pace for nearly 1,250 for the season. Brown has had at least 50 receiving yards in all five games, making him the first Bills player to have a streak that long since Lee Evans went seven straight games to start the 2008 season. Allen was sacked four times, although he was guilty of holding onto the ball too long on a couple of those.

Titans running back Derrick Henry got loose a couple times. He had runs of 24, 17 and 10 yards, but his other 17 carries produced just 27 yards. Defensive tackle Ed Oliver tied for the team lead with six tackles. Oliver and defensive tackle Star Lotulelei combined to stop Henry for a 1-yard loss on a second-and-4 play with less than 5 minutes to play. That set up a third-and-5 that the Titans failed to convert. They would not see the ball again. Defensive ends Jerry Hughes and Trent Murphy each had a tackle for loss, with Murphy stopping Henry 4 yards behind the line of scrimmage in the second quarter. The secondary continues to be strong in run support. Safeties Jordan Poyer and Dean Marlowe and cornerback Siran Neal all made tackles within 2 yards of the line of scrimmage. Titans quarterback Marcus Mariota can make things happen with his legs, but was held to just 13 yards on five attempts.

The pass rush was ferocious, sacking Mariota five times. The Titans’ quarterback looked positively pedestrian in going 13 of 22 for 183 yards. Linebacker Tremaine Edmunds, safety Dean Marlowe and cornerback Kevin Johnson each had a pass defensed. The lone breakdown came on a tight end screen to Jonnu Smith that went for 57 yards. That broke the Bills' 31-game streak of not allowing a reception of at least 50 yards. “We read our keys wrong,” safety Micah Hyde said of the play. “We’re going to watch film and correct it.” Nevertheless, at the conclusion of Sunday's game, the Bills' pass defense ranked second in the league, allowing 187.2 yards per game.

A week after melting down against the New England Patriots, the Bills experienced an opponent doing the same thing. Titans kicker Cairo Santos missed all four of his field-goal attempts. One of those attempts, a 33-yarder in the fourth quarter, was blocked by rookie Darryl Johnson Jr. That was a huge play. Punter Corey Bojorquez had a strong net average of 43 yards on six punts. Four of those punts were downed inside the Titans’ 20-yard line, although Bojorquez did have a pair of touchbacks. It was a quiet game for return man Andre Roberts. His only kick return went for just 18 yards, and he gained just 2 yards on two punt returns. The Titans did a good job kicking away from Roberts. Kicker Stephen Hauschka converted two extra points. That might not sound like a big deal, but every point mattered, especially after watching Santos. Hauschka boomed his kickoffs, producing three touchbacks. McKenzie took a costly penalty during a punt return, costing the Bills 17 yards of field position.

A week after getting an "F" grade, Sean McDermott and Co. responded with a strong performance. Offensive coordinator Brian Daboll dialed up a few impressive plays, including the Smith touchdown, McKenzie’s long gain and Allen’s first-down run that allowed the team to run out the clock. It’s a credit to the coaching staff that the players who came into the game as injury replacements didn’t miss a beat. “We knew it was going to be close," McDermott said. "We expected this type of game. The focus our players had, being sandwiched in between an emotional game last week and the bye … we executed at a high level.” The coaching staff deserves a lot of credit for that. One issue that will need to be addressed is penalties. The Bills were flagged 10 times – even if some of them were highly questionable – but that’s too big of a number.

Defense, Duke Williams do enough for Bills in big win