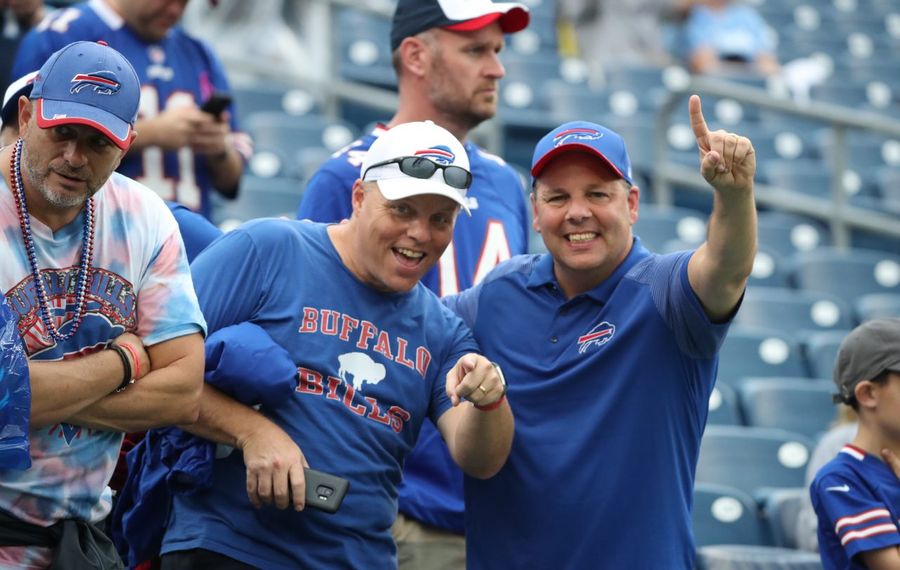 NASHVILLE – As soon as Quinton Spain took a look at the Buffalo Bills’ schedule and saw they played the Tennessee Titans here, he knew that meant something akin to a ninth home game.

The Bills’ left guard played the previous four seasons with the Titans and was used to the home team enduring a hostile environment from the hordes of opponents’ fans that often pour into Nissan Stadium.

“The fans always come here. It’s Nashville,” Spain said. “They’re taking a vacation, for real. There’s so much things to do out here in Nashville that they can enjoy, so I knew. It was like last year when Philly came. Philly fans had more seats than the Titans fans.”

Officially, 66,910 fans attended the Bills’ 14-7 victory on Sunday, and if that is indeed accurate, 20,000 might have been Bills fans. But that meant far more than hearing the “Duuuuuuuuuuuuuke!” chants ringing throughout the stadium every time receiver Duke Williams caught a pass.

It affected the way the Bills’ offense was able to operate. A silent snap count wasn’t necessary.

“Almost half the time we were going off of Josh (Allen)’s voice,” right guard Jon Feliciano said. “In a tight game, in the NFL, that’s not really what happens. But when half of the crowd is filled with Bills Mafia, we can do things like that.”

Spain told his Bills’ teammates that would be the case.

“I told them before we got here, I’m like, ‘Bro, nine times out of 10 we can go off his voice because it don’t get loud like that unless they’re really up or something like that,’ ” Spain said.

Bills coach Sean McDermott noted the atmosphere in his opening remarks after the game.

“What a fan following down here. Unbelievable,” McDermott said. “I don’t think I have ever seen it like that at an away game. Fans, great job. As we pulled in on the bus as I looked to my left, a couple of parking lots away from here, and it was all Bills fans and it was awesome. I really appreciate that. The players felt it, the staff felt it.”

The Bills’ offense, after relying on the defense to close out victories through the first month of the season, took control late in the game. Buffalo took over, following a punt, at its own 29-yard line with a seven-point lead and 4:12 remaining.

The Bills picked up four first downs and ran out the clock.

“We were talking about that before the last drive started,” Feliciano said. “We wanted to end the game with the ball. We were (upset) that we haven’t done that yet. Our defense is a great defense. They bailed us out a lot already so far in this short season. So it was very important for the offensive line to finish the game with the ball.”

T.J. Yeldon zipped 11 yards for a first down, Frank Gore ran for two more, rumbling for 11 yards and 19 yards on consecutive handoffs, and Allen scrambled for the last one, rushing for five yards around left end. He slid and remained in bounds to seal the victory.

“I said, ‘We’ve got to end with the ball. I’m tired of having the defense carry us, so let’s carry them this time.’ ”