From butternut squash and apples to pumpkins and mushrooms, restaurants are eager to embrace the harvest and concoct belly-warming dishes to suit the season.

Local Restaurant Week's premise is simple: Participating eateries offer meals – for lunch, dinner or both – for discounted rates reflecting the year, beginning at $20.19 but reaching $40.19 for larger offers or upscale joints.

From Oct. 7-13, Buffalo-area restaurant patrons can capitalize on bargains, but with patience and compassion as restaurants deal with higher-than-usual traffic and thus a greater strain on their employees.

Continuing a previous approach to these stories, we have avoided duplication on any of the restaurants highlighted in the spring 2019 and fall 2018 editions of this "10 deals to try" post.

There's no reason that vegetarians should feel left out of Restaurant Week, and this sweet-and-spicy combo from Black Iron Bystro won't sacrifice quality either (frankly, this could appeal to any omnivore).

Note: Carnivores will approve that Black Iron's ribeye is prepared medium-rare by default.

Looking for the most bang for your $20.19? Consider Brewpub, one of Buffalo's beer-making forefathers, which compensates for a lack of flair with a stick-to-your-ribs meal at a stunning rate.

Following a house salad, the housemade Shepherd's Pie comforts by nature, with seasoned ground beef, browned potatoes and a fleet of cooked vegetables – green and red peppers, carrots, onions and peas – all coexisting in a hot heap. You can't go wrong with the housemade turkey pot pie, either. Those are tough to make yourself.

Brewpub's internal brewing operations – which you can spy from the main dining area – produces a few solid pairings for the LRW entrees. Brewpub's own Nickel City Dark is a proper fit for the pie, but also ponder the German-influenced honey marzen, a collaborative effort between the pub and downtown brewery Big Ditch.

Note: Brewpub's amber ale is considered its flagship beer, and it's also available in the Local Restaurant Week deal.

Don't forget about the original Sun, looking fresh in a quiet part of Black Rock. We'd be remiss if we left Burmese cuisine off this suggestions list, and The Burmese Feast featuring owno koksware is a must-try experience.

When he delved deeper into Burmese fare, it was the own no koksware – the chicken coconut noodle soup – that won over News Food Editor Andrew Galarneau. He took every opportunity to tell the masses about the bowl that felt like "grandma's hug."

Go in a different direction with the starter – the crispy volcano roll is a chance to try Sun's sushi, while the dessert is a sweet number – mango sticky black rice – from the first black rice bar in town (seriously, there was even a ribbon-cutting for it in 2013).

Deal: Three entrees are $20.19 apiece (with two sides, salad, soda and choice of dessert), while the haddock or catfish combo is $30.19 and includes 12 shrimp. Menu.

You might recognize Park Vue because of its location – in the former Scharf's Schiller Park on a dead-end street. But the restaurant's concept and interior won't be recognizable, however, as Harrita West – a local bank manager – and her parents transformed the throwback German joint into soul food central with brighter lighting, new flooring and new walls.

West speaks highly about her mother's deep-fried ribs, coated in a house barbecue sauce described as "killer," or more specifically, "tangy and a little sweet with a kick at the end." Eat them quick to appreciate the crispy coating on the ribs from the fryer.

Classic soul food side dishes are available, too: collard greens and macaroni and cheese seem fitting. Finish the meal with some Southern sweet potato pie.

The first word you should think of when Curly's is mentioned is either "Lackawanna" or "jerk," and not in the insulting sense.

Jerk seasoning lingers lovingly and shines especially in the airline jerk chicken, served with red beans and coconut-steeped rice. (While the name suggests a notable history of poultry aviation, it simply refers to the chicken's presentation, a boneless breast with skin on, drumstick still attached).

The daily bean allowance is bolstered by the opening black bean soup, while the peanut butter pie with Oreo crust is a no-brainer dessert. (It's funny that no other sweet option is given, because who would shrink from that?)

The value between lunch (affordable) and dinner (elaborate) appeals at the restaurant inside the Westin; it's almost worth going to each. For lunch, the housemade pierogi (potato, leeks, sour cream, onions) is a nice start, especially to appreciate the massive difference between hand-assembled and store-bought frozen 'rogi. The main event could be the house-smoked pastrami sandwich, topped with sauerkraut and gruyere.

For dinner, the starters are the same, but the entrees can be both extravagant and fairly healthy: The roasted chicken breast is a simple dish prepared meticulously, while the trout almondine is a creative means of dressing a subtly flavored fish.

For diners familiar with cheap rotisserie chickens, how a restaurant prepares a roasted chicken breast is a strong indicator of the kitchen's quality.

A dessert can be worthwhile if it's not gigantic, and that's the case with Patina's seasonally inspired pumpkin creme caramel, which works in cinnamon whipped cream, toasted oat crumble and pumpkin seeds to spruce up a standard.

One chief way the new Resurgence differs from the original location on Niagara Street is its food menu. While the latter focused on finger foods, the former boasts an upscale-leaning, thorough selection of burgers and dinner entrees.

The three-course option leaves more room for exploration; we'd start with beet deviled eggs (with dill and horseradish), which will be nice for Instagram and leave room for the rest of the meal.

For readers annoyed by adventurous suggestions such as koksware, gochujang and the appetizer for this meal, we'll relent by picking the Buffalo fried chicken sandwich on a Costanzo's roll. This is pure and classic Buffalo. Pick between five styles – spicy honey or beer barbecue are a step away from the mild-medium-hot trinity.

It's the dessert choice that's flummoxing, in a good way: Would you rather have the housemade ice cream sandwich between chocolate chip cookies or the housemade doughnuts with vanilla cappuccino pumpkin ale glaze and vanilla ice cream? We'd lean toward the former, but both intrigue.

Armor Inn Tap Room has emerged from a transition period with a new culinary focus: an "eclectic smokehouse," as the Local Restaurant Week website says, doubling as a strong band name.

What better way to try out a restaurant's smoking prowess than its Texas angus beef brisket – sliced thin and finished with a "private recipe" barbecue sauce (so don't ask) – backed by a Murderer's Row of sides: cole slaw, Tex-Mex corn, steak fries and apple compote for dessert. That sure reads like a well-balanced meal.

A luxurious consideration for $30.19 is the dry-rubbed ribeye steak and bacon-wrapped shrimp topped with a Jack Daniels barbecue sauce.

High marks for Schnitzel & Co.'s enticing Local Restaurant Week menu graphic, as well as not repeating the same thing at both locations. The German menu items are enjoyable to say, especially when rattling off schweinbraten and kuchen in rapid succession.

But schweinbraten is more than a sharp name; it's slow-roasted pork shoulder, pork gravy, parsnip potato mash and brussels sprouts, leading to tender meat and a mix-them-all-together opportunity.

While the pork will still be the star, open with the pumpkin ravioli (with sage, brown butter and pecans) and wrap up with the peach and custard kuchen (cake) so you don't miss out on the seasonal flavors. My stomach is full and pleased just thinking about this meal.

Note: If variety is the aim, the Wurstplate introduces the restaurant's namesake as well as cute little potato pancakes and a nice collection of sausages. 'Tis schnitzel season, after all.

Hooked is one of the newest restaurants participating in Local Restaurant Week, fresh off an 8-plate News review last month that heaped praise on its seafood. Judging from the review, the blackened swordfish in the $30.19 tier and the lobster gouda mac and cheese in the $40.19 slot are wise decisions. 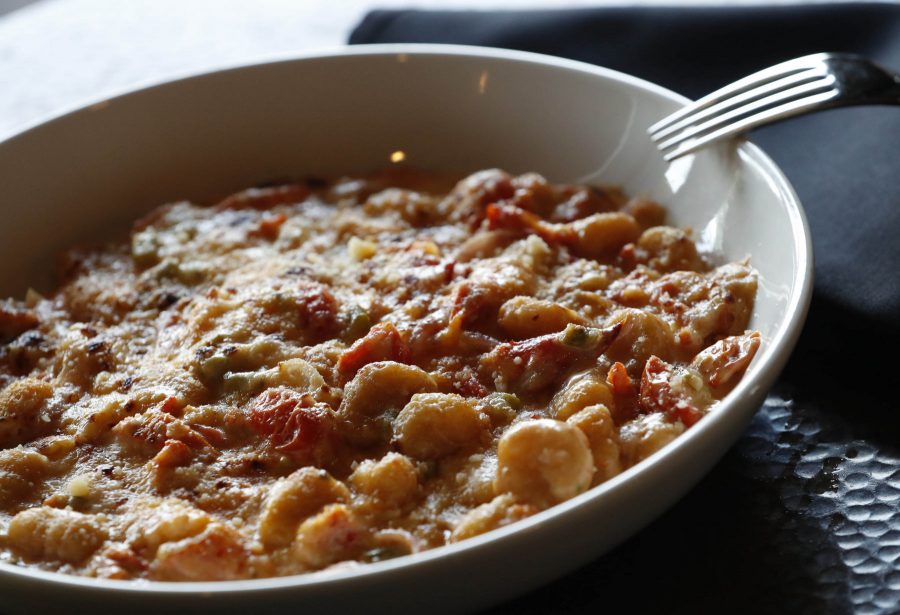 The former arrives crispy on the outside, moist on the inside – all on top of creamy corn grits with aid from gouda. A glass of wine is included in the price, as well as a choice between a cannoli or cheesecake. (As always, "leave the gun, take the cannoli").

The latter, while part of the most expensive deal, comes with a craft cocktail, a healthy portion of lobster and the same choice in dessert.