Weather permitting, a group ranging in age from 75 to 104 will leave Blocher Homes on Monday afternoon and make their way to the edge of Evans Street to hold a protest over plans to close the Williamsville assisted-living residence.

In deference to their age most will sit, not march. Neighbors of the property and the union representing some workers at the home also intend to join the residents outside Blocher.

It's the latest effort to stir up public opposition to a proposal to transform Blocher into low- and moderate-income apartments, a move that would force out residents who say they and the employees who care for them are like a family.

"You would not believe the angst this has created for the people living here," said Syd MacDougall, 75, Blocher's youngest resident. "It breaks my heart when I look around at some of our seniors. It's all they think about. It's devastating."

Blocher's parent, Beechwood Continuing Care, says affordable housing is badly needed in Williamsville and it can't afford to keep Blocher open as it currently operates. Officials say they've tried to address the concerns of Blocher residents and people who live near the property in crafting a proposal that's appropriate for the site.

Beechwood and People Inc. have modified their initial plans and the village Planning Board will begin its review of the updated proposal on Monday evening. Final approvals from all levels of government won't come until spring, representatives said, so nothing will change for the neighborhood or Blocher residents anytime soon.

"Every step of the way, we have shared and continue to share the most current information not only with our neighbors, but also with our residents, their families and Blocher staff," said Daniel O'Neill, president and CEO of Blocher and Beechwood.

But critics say the institutions haven't been transparent about their plan, have proposed a project that still doesn't fit in this neighborhood and have acted indifferently to residents.

"You get the impression that they really don't care about the people at Blocher," said Craig Speers, whose mother Mildred, 98, has lived at Blocher for about 20 months. 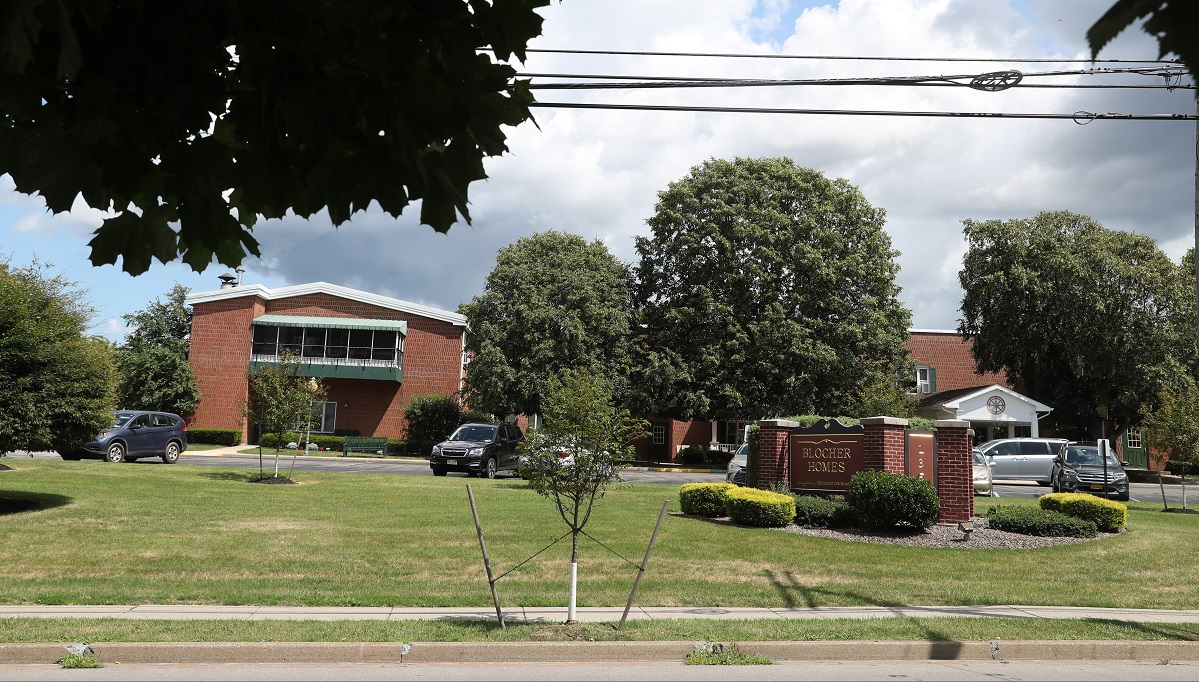 Blocher Homes has been below full capacity of 57 beds for years and has lost money the last four years. Residents say they are being given the option of moving to skilled-nursing care on the Beechwood campus, rather than the assisted living they are receiving now. (James P. McCoy/Buffalo News)

Blocher Homes has provided senior living space since 1906 and the current building at 135 Evans St. opened in 1970. Blocher affiliated with the Beechwood Continuing Care senior community in 1977 and now offers assisted living housing for about 50 seniors.

Blocher has been below full capacity of 57 beds for years. Occupancy fell to 73% last year, as seniors live longer at home, and Blocher has lost money each of the last four years.

The organization also wants to bring all of its service lines onto its Millersport Highway campus in Getzville. Beechwood sought another use for the Blocher property and found a willing partner in People Inc.

The initial announcement of the project in August called for Beechwood to sell the 5.3-acre property to People Inc. O'Neill said it's possible Beechwood will have some stake in the repurposed facility.

Most of the building would feature mixed-income apartments, with some set aside for people living with disabilities.

The institutions have made some changes to the layout of the property after getting complaints from neighbors on Evans Street and Village Pointe Lane.

They eliminated a driveway onto Village Pointe, rearranged the parking on the site to remove spaces behind the building along Village Pointe and replaced the single, large addition planned for the Evans Street side of the existing structure with three smaller buildings.

The changes would boost the number of one- and two-bedroom apartments from 87 to 97, plans show. The $29 million estimated cost will increase significantly based on the planned changes, but officials didn't have a precise figure.

"It shows that we've really made a concerted effort to address their concerns," said Sean Hopkins, the attorney representing People Inc. and Beechwood.

The changes are appreciated, neighbors say, but they aren't enough.

Critics who live near the property – including many on Village Pointe, one of Amherst's most exclusive subdivisions – say they fear the loss of green space on the bucolic Blocher campus and a rise in noise and congestion from the apartments.

They say the population would easily triple, with more cars, more people and even more dogs coming in and out. And, they added, this neighborhood of single-family homes is not the right place for a densely populated apartment complex.

They say they're also concerned for the Blocher residents who would have to leave their home.

"For 42 years they've made it work, so what happened all of a sudden that they can't make it work? I think it's a change of approach on their part," said Village Pointe resident Paul Comeau, adding, "It seems like Beechwood is just trying to jump ship."

Neighbors have circulated petitions opposing the project that have received dozens of signatures, they've packed Planning Board and Zoning Board of Appeals meetings and they're ready to join the residents' planned protest on Monday.

"If it was my mother or father in there, I would like people to support me. It's not just about money, or things like that. It's just, they haven't treated those people right," said Bill Hein, another Village Pointe resident.

Residents and their families also say they're frustrated and some feel misled by the organization. They say officials initially indicated residents could choose to move into new assisted-living space on the Beechwood campus.

However, now O'Neill told them they can move into skilled-nursing space – a higher level of care – on the campus but Beechwood will not create assisted-living level service.

The residents say they've chosen assisted-living care for a reason and they don't want or need costlier skilled nursing.

O'Neill said he's assured the residents that as long as they are healthy enough to not need the full suite of skilled nursing care they will pay the same rate at Beechwood that they paid at Blocher.

Craig Speers said he feels Blocher's management is turning its back on the residents, who are traumatized by the threatened move, and officials haven't answered all of the residents' questions.

"That's their home," he said. "Their whole community is going to be pulled apart."

A group of Blocher residents since August has planned for a protest by, among other steps, making signs that say "The silent generation is silent no more" and "We want to stay where we are."

Members of 1199SEIU, which represents about 18 employees at Blocher, will join them. The residence has about 60 employees in all and it's not clear what will happen to them if Blocher closes,.

"We feel very disrespected. Shame on them for not involving us as a part of the process," Janice Nichter, a 19-year personal care aide and longtime union delegate at Blocher, said in a statement from 1199SEIU.

O'Neill said the organization has shared as much information as it can with workers given the project has only begun going through the approval process. Workers will have the ability to apply for positions at Beechwood.

"It's a big facility with a lot of needs," O'Neill said of the Getzville campus, which is non-union.

Union members also are joining the protest. O'Neill said he was surprised to learn of the protest.

"God bless them. I just want to make sure, if they do, that their well-being is paramount to everybody and that they're safe," O'Neill said.

The protest, which starts at 2:30 p.m. Monday, precedes the village Planning Board meeting by several hours. No vote on the project is expected that night.

The protesters say they hope village officials hear their views. MacDougall, one of the organizers of the resident opposition, said she's never joined a protest or picket line before.

"This is one of the things off the bucket list," MacDougall said, laughing as she referred to the group as "Gray Panthers."