Theresa Tesch faced a busy Wednesday morning. Even before driving her 7-year-old daughter Isabella to a doctor’s appointment, mother and daughter needed to stop by a monthly mobile food pantry for those in need at the Batavia Salvation Army, where Foodlink of Rochester was sharing a truckload of greens, pork loins, crates of grapes and other goods.

Outside her home, Tesch turned the key in their 1999 Toyota Camry, its odometer now at 256,000 miles. Nothing happened. The engine seemed dead.

She turned the key again. The engine rumbled to life, a sound about as good as it gets, because a breakdown would be a disaster for her family. She knew that sense of relief would be fully appreciated by hundreds of others in the line for food at the Salvation Army, including many regulars she considers friends.

“You have no idea,” Tesch said, “how hard it is if we miss one food pantry.”

She lives in Batavia, at the heart of New York’s 27th Congressional district, a seat Chris Collins officially gave up this week. He pleaded guilty to felony charges tied to an inside tip that caused his son to save hundreds of thousands of dollars by dumping shares in an Australian biotech on whose board Collins served, just before the bad news went public and the stock collapsed.

One day after that plea, at the Salvation Army, the parking lot was jammed as people arrived to join the line. All nearby spots were soon taken on Spruce Avenue and Margaret Place, and parked cars lined Trumbull Parkway, a solid block away. 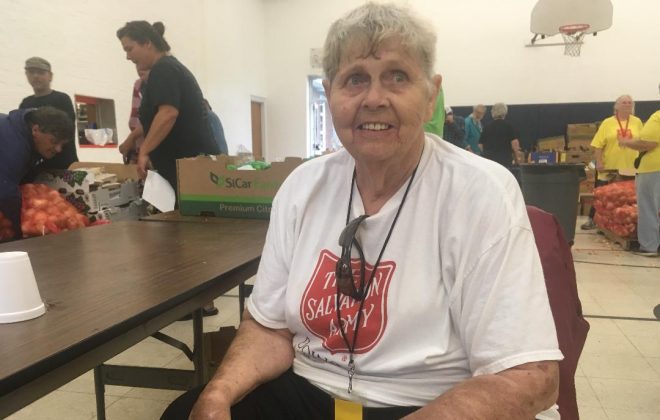 By noon, the pantry would serve almost 600 people, representing 161 families. I went there with a simple question. A special election will eventually be held to fill the vacated seat in Congress, and the public spotlight now is focused mainly on fierce politics.

I just wanted to ask some citizens, moving quietly through line, if they had any particular message for the candidates.

“These are not people looking for a handout,” said Capt. Rachel Moore, who helps lead Batavia's Salvation Army with her husband, Lt. Bradley Moore. “At the end of the month their money dries up, and this helps a lot with their groceries.”

Tesch is a substitute teacher who worked full-time until she left her job to care for her ailing mother, who died a year ago. She lives in a mobile home with her daughter and husband, who gets up every morning to work as a laborer. They are just past the threshold for government assistance, and life is a weekly struggle to pay the bills. Tesch said the couple cannot even think about a luxury like cable television.

To her, just doing some real listening in that line would be a revelation for any candidate. Her family went through an up-against-it period where the washing machine stopped working, before the furnace and refrigerator broke down. They know the clenched-gut-feeling of morning calls from bill collectors. Their weekly budget for groceries, gas, health insurance deductibles and anything beyond is $150, about $22 a day.

Six times a month, Tesch visits local food pantries, including the Batavia stop that is among the "40 or 50" mobile pantries throughout the region that Foodlink spokesman Mark Dwyer said his organization provides each month.

A couple of men stood by the gymnasium door and helped retirees carry groceries to their cars. Todd Rapp, who oversees both the mobile pantry distribution and a daily emergency food pantry for the Salvation Army, introduced me to a guy named Bruce, 45, who lives at the Atwater community residence for men recovering from substance abuse. 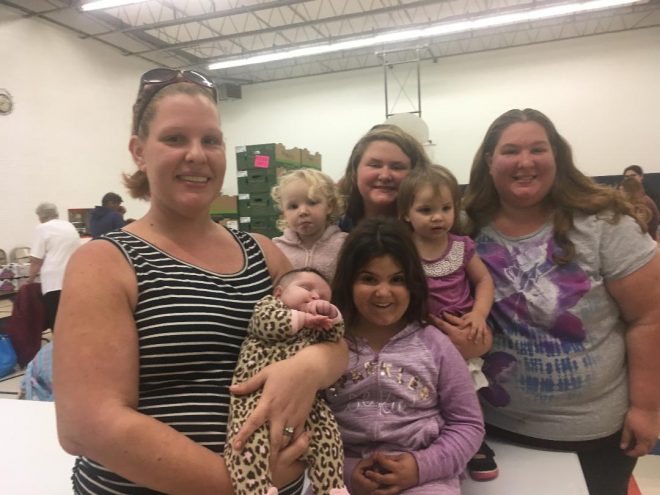 For Theresa Tesch (right), a mobile food pantry at the Salvation Army was a family gathering. That is Theresa's twin sister Amanda at far left, holding her newborn daughter Victoria; Amanda's twins Michaela (light hair) and Alicia (dark hair) held by a 14-year-old daughter, Aurora; while Theresa's  7-year-old daughter Isabella is in front of the twins. (Sean Kirst/Buffalo News)

Bruce, as a participant in Narcotics Anonymous, was not able to give his whole name, but he was passionate about sharing his story. He is a recovering heroin addict. Maybe five months ago, with his 7-year-old son calling to him from the far side of a locked bathroom door, Bruce collapsed and lost consciousness after shooting up.

He suddenly woke up and opened the door. He lives with the image of his son's terror, the haunted eyes of a forgotten child.

“I was sick of the life,” said Bruce, now trying to get clean while his son stays with his grandparents. The thought of the boy stopped Bruce cold, grief tightening the muscles in his face, before he caught himself and explained how part of his recovery is community service, which brought him to the Salvation Army.

He has plenty he would tell Congressional candidates. He would speak of the emptiness that feeds addiction in too many small and struggling communities, of a desperate void in the civic fabric he wishes they could understand, but his immediate point is this: There are too few beds or places of respite for those ensnared by opioids in rural areas.

“People are dying while they wait,” Bruce said. As he spoke, he raised his hands in sheer emotion, and I noticed he had “stay true” tattooed upon his fingers.

Today, amid recovery, those words mean life or death. 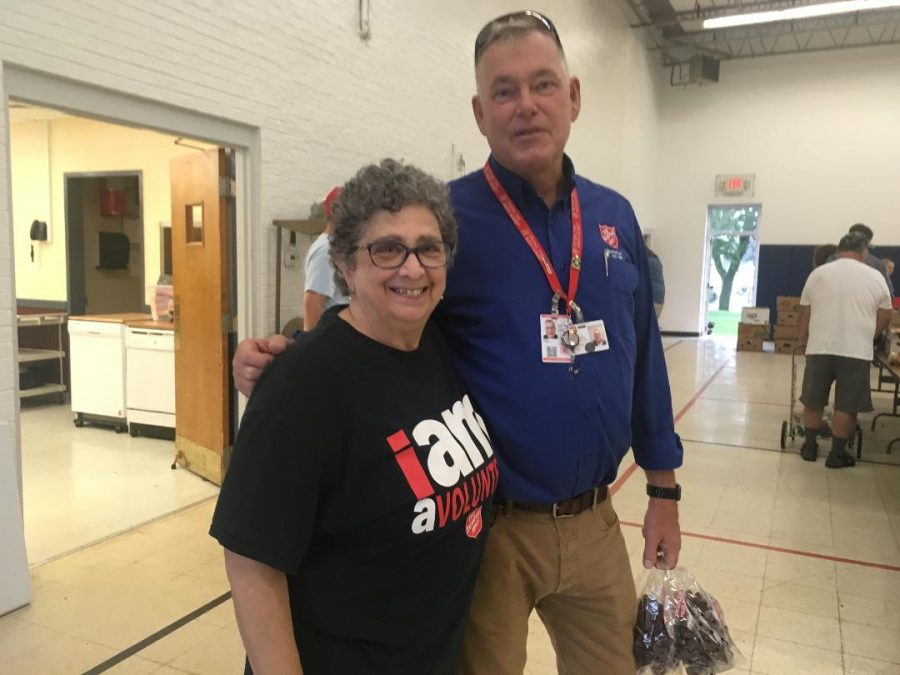 His demeanor reflected the atmosphere throughout the gym: Despite hardships, many people found warmth and kinship in the line. Rapp, a former paramedic, said he counts on 36 volunteers for help. Some, like 74-year-old Mary Hubbard, once made use of the pantry to lift up their own families, and now see volunteering as a means of saying thanks.

Hubbard outlived both her children. She lost one eye in a childhood accident, and is legally blind in the other. Yet she beamed while greeting newcomers from behind the table, offering assistance as they reached out for fresh produce, and the regulars spoke to her in the way you might address a spirited grandmother.

Another volunteer, Mary Shaughnessy, rushed to intercept a young mother recovering from a broken foot, wondering if she needed help – a question based on real knowledge of her life. Among those Shaughnessy welcomed was Barbara Schultz, a regular who collected her groceries and then packed them in her van.

Wednesday was Schultz's 83rd birthday, and she intended to celebrate by making use of some new spaghetti squash, a plant she never tried before she found some at the pantry.

The food makes a big difference, she said. Her husband, who died 11 years ago, was a cemetery caretaker. Schultz’s last job was at a Walmart. She is a regular at the pantry because it helps her to get by and because she finds companionship in regulars she now knows well – some of them carrying young children.

Her advice for Congressional candidates?

“Think about these families,” she said.

As for Theresa Tesch, she was joined at the pantry by her twin sister, Amanda, a mother of six who lives out the same story: She held her newborn daughter, Victoria, and said their family makes it from week to week, in a world where you simply pray something important does not break.

I asked the sisters the same question in the wake of Collins' guilty plea and his decision to resign, wondering what they would say if they could speak, eye-to-eye, with those who want that job.

“Don’t just be with the people up there, because we've got a voice, too,” Tesch said. “Be with people like us, and come around.”