To look at what looms as the biggest season of Jimmy Vesey's career, you have to first circle back three years to what was the biggest decision of his hockey life.

The Buffalo Sabres' newest left winger was a 23-year-old with a Harvard University degree who hadn't played a game in the NHL by the summer of 2016. And he suddenly and unexpectedly found himself as one of the key names and major power brokers in the sport.

Vesey was a third-round draft pick of the Nashville Predators in 2012 from the South Shore (Mass.) Kings in Foxboro. He was a 48-goal scorer as an 18-year-old and blossomed into the Hobey Baker Award winner at Harvard.

Each year, he would dutifully attend Predators summer development camps and get feedback during the season from the Nashville staff. By 2016, the Predators were offering Vesey an NHL contract with a top-9 role in the playoffs and no thought of time in the AHL.

"We really have this need for a left wing with his size and ability and scoring potential.” Nashville GM David Poile told reporters at the time. “All I can tell you is we are very hopeful to sign him and I tell you firmly that he’s not going to be going to Milwaukee, he’ll be coming here.”

Few players out of college get that kind of guarantee, but Vesey had other ideas. Once you're in college four years, you can wait until Aug. 15 after your senior year and become an unrestricted free agent. It's not a well-known verse in the CBA but some players have used it. Vesey told the disappointed Predators that was the route he was going to take.

With Nashville out of the picture, the Sabres took a stab in the dark when GM Tim Murray sent a third-round pick to the Preds to get Vesey's rights. Murray thus had a month of a head start to convince Vesey to sign before he was a free agent – and already had Vesey's close friend, Jack Eichel, on his roster.

The Sabres got one meeting with Vesey in Boston in July, 2016, but it went nowhere. Vesey's message to Buffalo was a simple thanks but no thanks.

The hockey world, and especially social media, turned on Vesey in that period while waiting for his decision as NHL GMs and coaches piled East to watch Vesey in the Foxboro Summer Pro League. Veteran players working out that summer grumbled about a kid with no games of experience deciding where he would get to play. The media labeled him as selfish.

"Obviously he's a smart guy and I don't think he let all that noise and a lot of that garbage that went on get the best of him," Eichel said Sunday in KeyBank Center. "He took some heat for going into free agency but at the end of the day it's his career and his life. Why would you limit yourself to one team when you can potentially be in different markets?"

There have been others, but Vesey is the one who got vilified for it. Maybe it's because he spurned a good team, which went to the Stanley Cup final in 2017. Maybe it's because he took his time in the summer, leaving fans and media hanging and waiting for a decision. Being a Hobey winner was a big factor as Vesey Watch became a thing.

I vividly remember calling Vesey a "punk" on Twitter during that period. He got much worse than that, sure. But the fact doesn't change that I was out of line.

I apologized to him last week in person in the Sabres' dressing room and am doing so publicly with this column. Vesey laughed uncomfortably at first when I fessed up, but said he understood, too.

"The biggest thing I can say now is that anyone who knows me knows all those things people said are just not how I am," Vesey said. "I'm a quiet guy and it got crazy there. The thing was I wasn't the first guy to go UFA. I won't be the last guy. I was just taking my option there. I had been with them for four years and felt I wanted to pursue other things. It became a big deal on the outside."

Sure did. Especially when Vesey went for the bright lights of the big city and signed with the New York Rangers.

"For somebody who went to Harvard and had a lot of connections and friends there, being in New York City gives you a chance to do a lot off the ice," Eichel said. " 'Ves' looked at the opportunity hockey-wise like anybody would: You get a chance to play in Madison Square Garden every night and represent the Rangers. Pretty cool, right?" 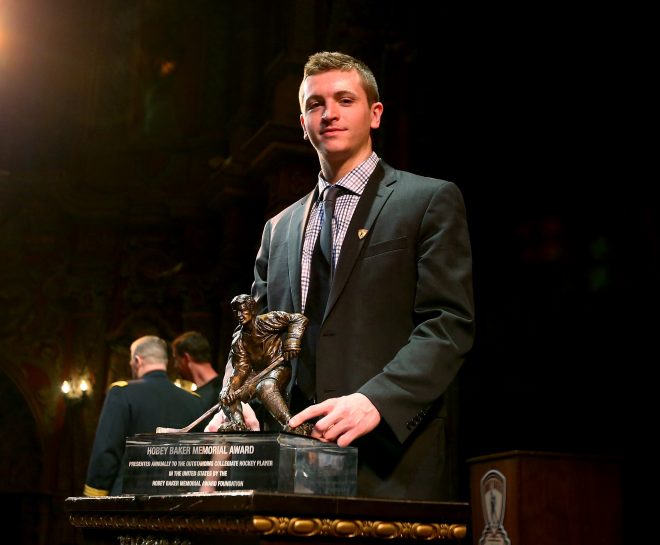 Jimmy Vesey won the Hobey Baker Award in 2016 as a senior at Harvard. (Getty Images)

What do the Sabres get?

The Rangers moved Vesey on July 1 for a third-round pick and the Sabres are getting durability with some scoring ability. They also should be getting a hugely motivated player, with unrestricted free agency again looming for Vesey next July.

"Lines shuffle and power plays can get mixed around so you have to find a way to score 5-on-5 and they were pretty clear that was a big reason they brought me in," Vesey said of the Sabres. "One of the things I've taken pride on is being able to go to the front of the net. I like to get in the tough areas. Everything is not going to be tic-tac-toe. I can go hard to the net but I like to skate and shoot pucks, too."

"Jimmy has been outstanding in his acceptance and hunger to find his way in the team," said coach Ralph Krueger, who has Vesey slotted on his third line for Thursday's opener in Pittsburgh. "He's a good teammate. ... Left side or right side, on the power play or off, he brings a good spirit to the room, he brings a hunger to the room to try to help the team. He's been very teachable and coachable. He's really come in here and feels like he's at home."

Vesey played the last two years in relative anonymity. His first season was much more scrutinized.

The first game he played in Nashville was a circus. On Dec. 17, 2016, with Bridgestone Arena fans lining the glass during warmups and Predators fans taunting him with signs, Vesey scored in a shootout to help the Rangers to a 2-1 win.

One Preds fan's sign said simply, "Jimmy Vesey is a lying weasel." The boos were nonstop during the game every time he touched the puck.

It had been much the same when he came to Buffalo for the first time two weeks earlier. Just about every time he touched the puck, the crowd booed.

"Nashville was actually fun in some ways. Guys on our team were chirping me about some of the signs," Vesey said. "I don't think too many of them knew what was going on when we came here. Even during the game, we were on the ice and  (Sabres winger) Marcus Foligno asked me what all the booing was about." 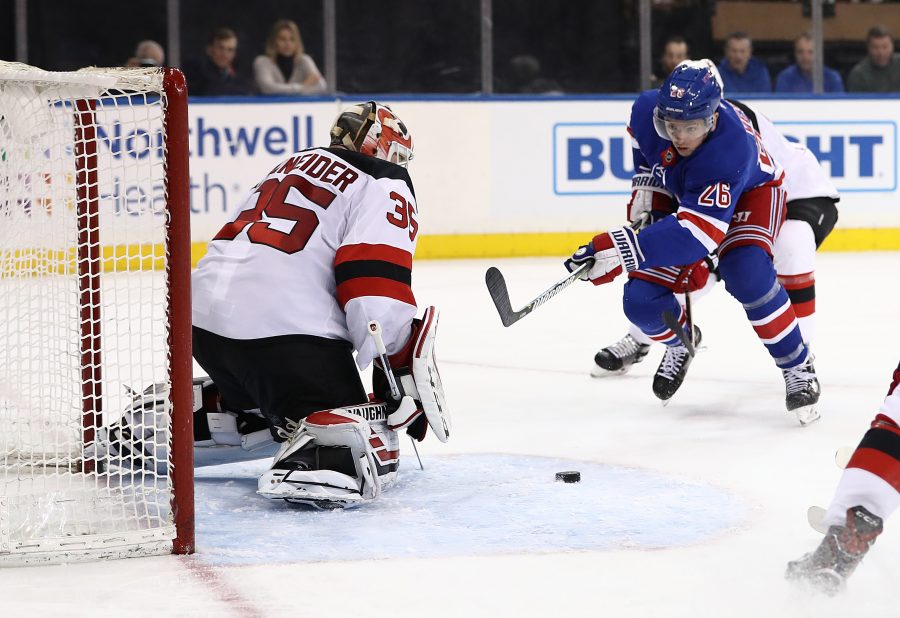 Jimmy Vesey spent three seasons with the Rangers before being traded. (Getty Images)

Eichel said he first met Vesey around 2012 when he was a 15-year-old in the Foxboro Summer League in Massachusetts coming off time with the Boston Jr. Bruins and Vesey was a 19-year-old heading to Harvard that fall.

They were foes during Eichel's one year at Boston University but friends and summer workout buddies since. Eichel is as impressed by Vesey off the ice as on it, and who wouldn't be?

"I used to try to take classes about Asia," Vesey said. "For a little bit, I was contemplating doing secondary work in East Asian studies, but I guess the stars never aligned on that."

As you might expect, Vesey reveled in the experience of being a Harvard student and combining that with an NHL career.

"I took my time, graduated college, had a great end to my senior year and I think I deserved that after staying there for four years," he said. "That summer my decision was made and I had a great time in New York. It was an incredible experience, not only being able to play for the Rangers but I had a lot of friends from college that had moved there for work. Being able to see them and having the hockey side of it made it a great three years."

Eichel and Vesey were reunited by the trade three months ago, leading Vesey into his most important NHL season yet. He's yet to score 20 goals in an NHL season and that's a big objective. It would help the Sabres immensely now – and certainly up his market value for next summer.

"Obviously it's not the first time I've been in this situation," Vesey said. "Three years in New York I played pretty much up and down the lineup and that was good training. Another example of mental toughness like when I went through (in 2016). You're not going to have 82 good games, you're not going to be on the first line or the top power play all 82 games."

Vesey said he figured the Rangers' rebuild under coach David Quinn might be moving away from him, especially after the team drafted Finnish winger Kaapo Kakko with the No. 2 overall pick. When he heard he was going to be Buffalo, Vesey had no qualms about playing in a place he once snubbed.

"I guess it is ironic," Vesey said. "But looking back, maybe if I had come three years ago I wouldn't be here now. You don't know. I think it just depends on your perspective. In this era of salary cap, a lot of guys get moved around. I'm very excited to be here. I was excited as soon as I heard about the trade."

The Sabres are banking on some of the mental toughness Vesey showed three years ago translating to veteran leadership – and performance – on the ice this season.

"He's a normal guy who has done a lot of really cool things in his life," Eichel said. "He's got life experience, very well-rounded. I mean, a degree from Harvard. That says a lot. Everything he's been through with all of his time in Harvard, his free agency, his time in New York, it's made him who he is.

"Look at someone his age and all those things put together, it's pretty impressive. I don't think he'd change it for anything. You learn a lot from something like that. He's excited for his new opportunity, and I know we're excited to have him."