From Luke Adam to Dainius Zubrus up front and from Tom Barrasso to Adam Wilcox in the net, exactly 500 players have suited up for the Buffalo Sabres in the regular season and playoffs since they were born in 1970.

There have been 449 skaters and 51 goalies wearing the Blue and Gold – and the Black and Red. Winger Victor Olofsson became No. 500 when he made his NHL debut on March 28 during the Sabres' 5-4 overtime loss to Detroit. Winger Michel Deziel is the answer to the trivia question of which player appeared for Buffalo only in the playoffs (1975) but never in the regular season.

Who are the most memorable? Here are our choices for the Sabres' "Golden Team" – the top 50 players heading into the 50th anniversary of the franchise.

The argument of greatest player in franchise history begins and ends with this pair. If you're partial to goaltenders, Hasek is your choice. If your pick is the first draft pick in franchise history, a center who remains the franchise's all-time scoring leader and its first Hall of Famer, how can you go wrong there?

The Dominator – what a nickname! – was known for his slinky for a spine and led the team through its glory days of the 1990s, within two games of a Stanley Cup before "No Goal" foiled the dream. Still the only goalie in NHL history to win two Hart trophies. Set NHL record with .937 save percentage in 1998-99, had 55 shutouts in Buffalo – no other Sabre has more than Ryan Miller's 28 – and had 2.22 career goals-against average. Second to Miller in franchise annals with 234 wins. 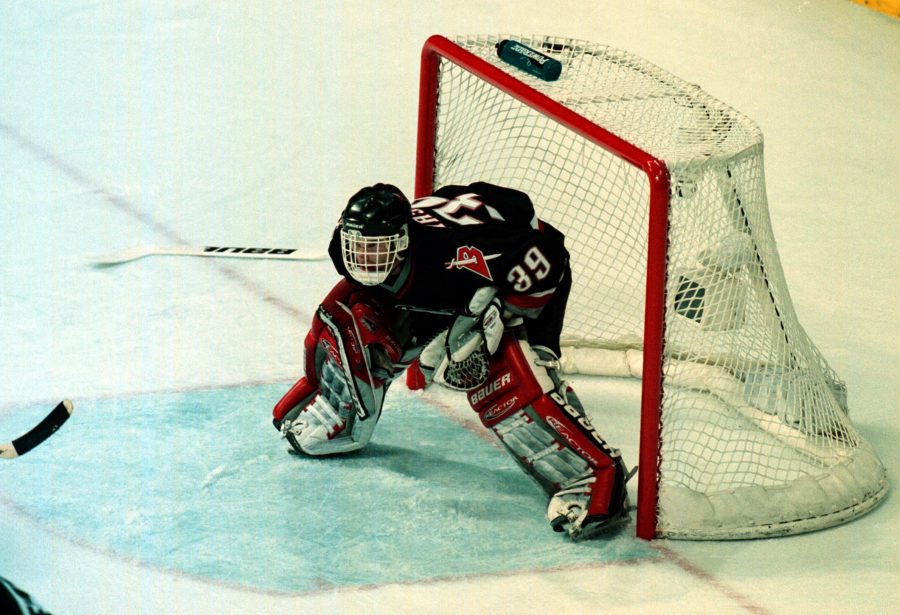 3. Pat LaFontaine (1991-97): Thanks to Rick Jeanneret, "La-La-La-La-La-La-La-La-LaFontaine" became a local buzzword in the '90s. Posted team records that still stand of 148 points and 95 assists in 1992-93, combining with Alexander Mogilny to become most lethal 1-2 duo in franchise history. His point total remains an NHL record for an American-born player. Spent five seasons as team captain and had iconic tap-in under the spotlight for the final goal of the closing ceremony at The Aud. Served as team president under the Pegulas for 3½ months during 2013-14 season but left under murky circumstances never fully explained by either side. Joined Hasek and Perreault as NHL100 members in 2017.

4. Rick Martin (1971-81): Broke Perreault's NHL rookie record with 44 goals in 1971-72, embarking on career filled with booming slap shots that saw him land second on team's all-time list with 382 goals. Became franchise's first 50-goal man, with back-to-back 52-goal seasons in 1973-74 and '74-75, and had 49 goals in '75-76. Thrilled Aud crowd with tying goal late in 1978 All-Star Game, contest eventually won in overtime by Perreault. Joined Rene Robert in having French Connection number retired in 1995 ceremony. Died at 59 in 2011 of a heart attack while driving in Clarence; team beat Ottawa later that day and saluted the No. 7 banner in rafters with pointed stick raise after final buzzer. 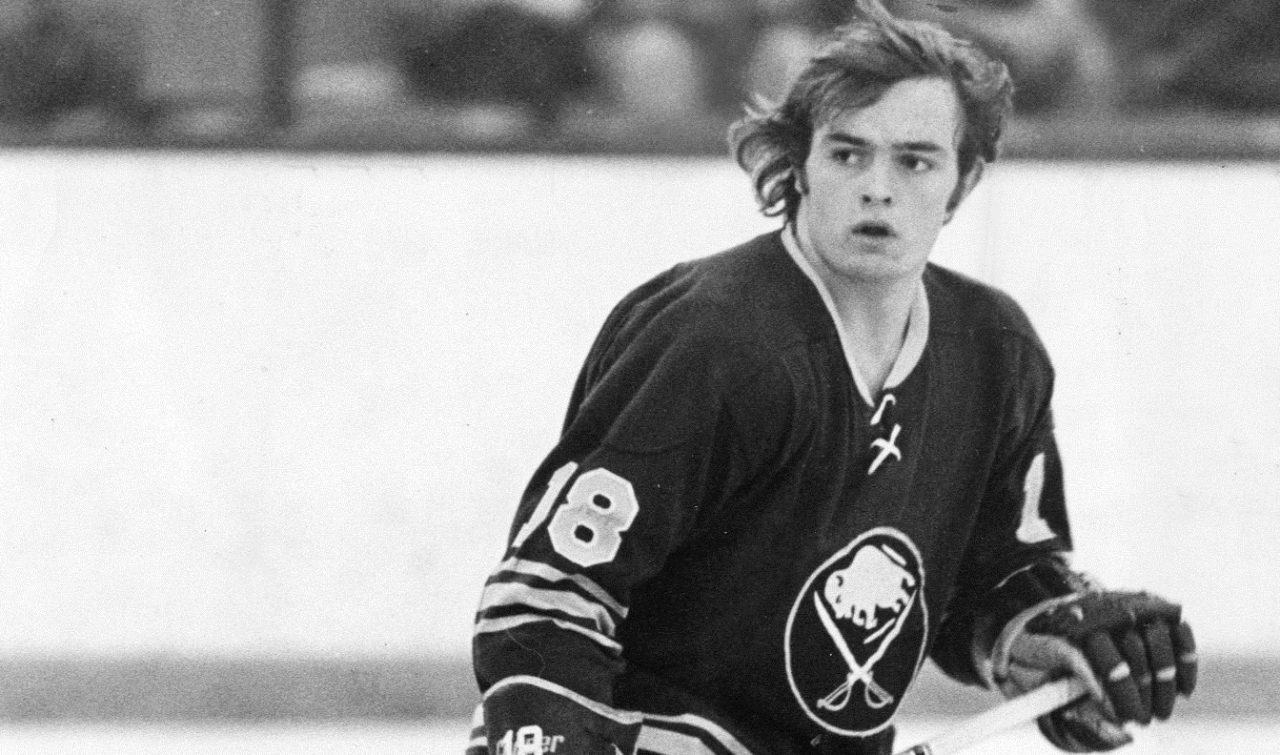 Danny Gare was a fan favorite and two-time 50-goal scorer when he played with the Sabres from 1974-81. (Buffalo News file photo)

5. Danny Gare (1974-81): Wrist shot specialist scored 18 seconds into first game in 1974 vs. Boston and tallied 267 career goals, most in franchise history by a right winger. Captained team from 1977 to '81. Shares team record for playoff overtime goals (3) with Rene Robert. Scored hat trick in regular-season finale against Toronto in 1976 to finish season with 50 goals. Had 56 goals for 1980 semifinalists, club record that held for 13 years. Spent many years after retirement as broadcaster with Sabres.

6. Mike Ramsey (1979-93): Graduated directly from 1980 Miracle on Ice team to NHL at age 19 and stayed as anchor of Sabres' defense until 1993, playing third-most games in franchise history (911) and most by a defenseman. Former first-round draft pick widely remembered as best shot blocker in franchise history. Spent three seasons as Sabres assistant coach under ex-teammate Lindy Ruff, including staff of 1999 finalists. Why isn't his No. 5 in the KeyBank Center rafters? 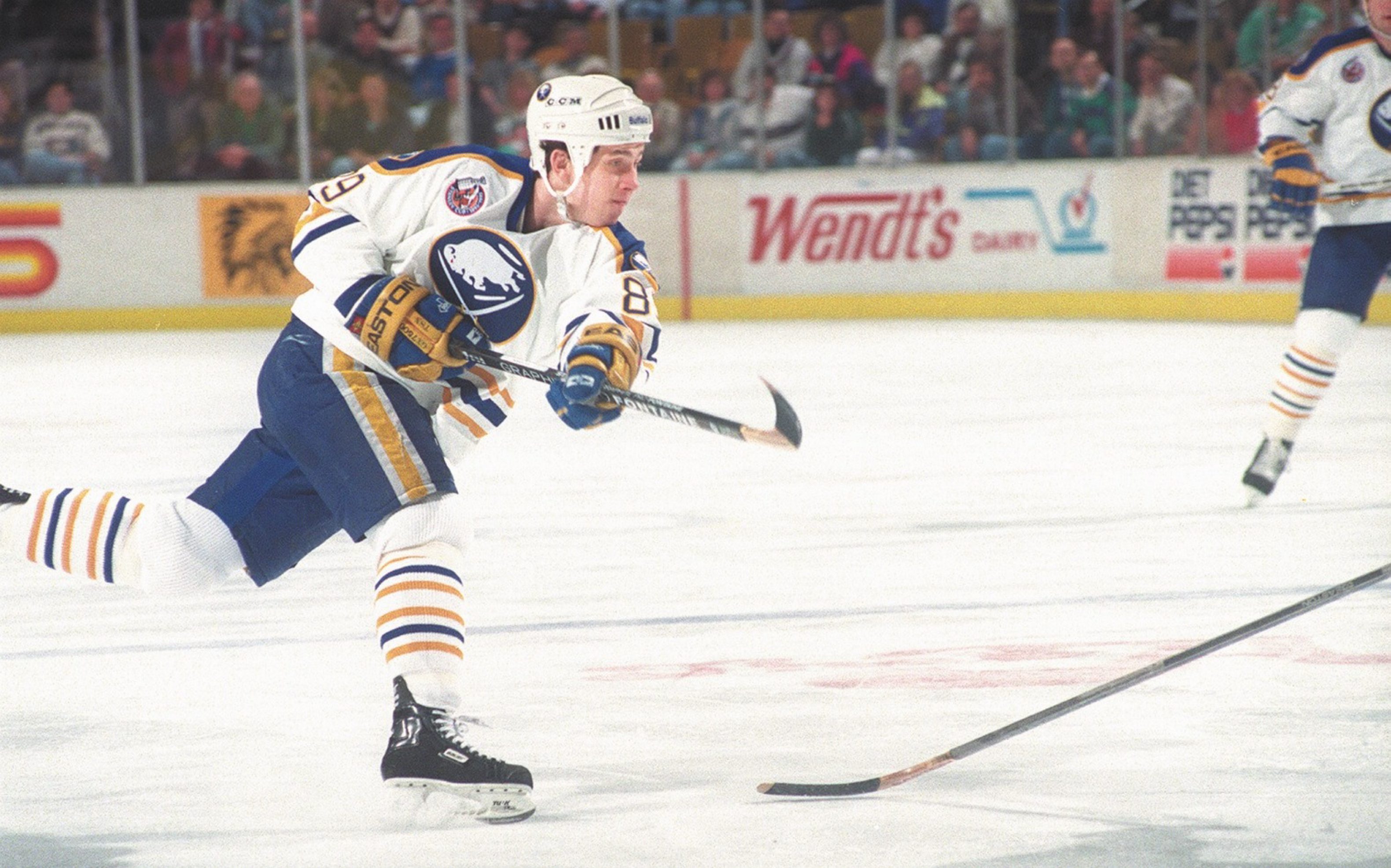 8. Alexander Mogilny (1989-95): "Alexander the Great" came from Russia, scored 20 seconds into his first game in 1989 and scored 210 more goals in six years in Buffalo. His breathtaking 76-goal campaign in 1992-93 is a club record and tied for fifth all-time. Finished with 473 goals in 16 NHL seasons and won a Stanley Cup with New Jersey in 2000. Currently rates as one of the more notable snubs by the Hockey Hall of Fame.

10. Jim Schoenfeld (1972-82, 1984-85): Fifth overall pick out of Niagara Falls (Ont.) in 1972 played 11 seasons here and was longtime captain, including 1975 finalists. Most remembered for long red hair and through-the-Zamboni-door battle tussle with Boston's Wayne Cashman in '72. Coached Sabres for 43 games in 1985-86 and ended long career as an executive with New York Rangers last season. 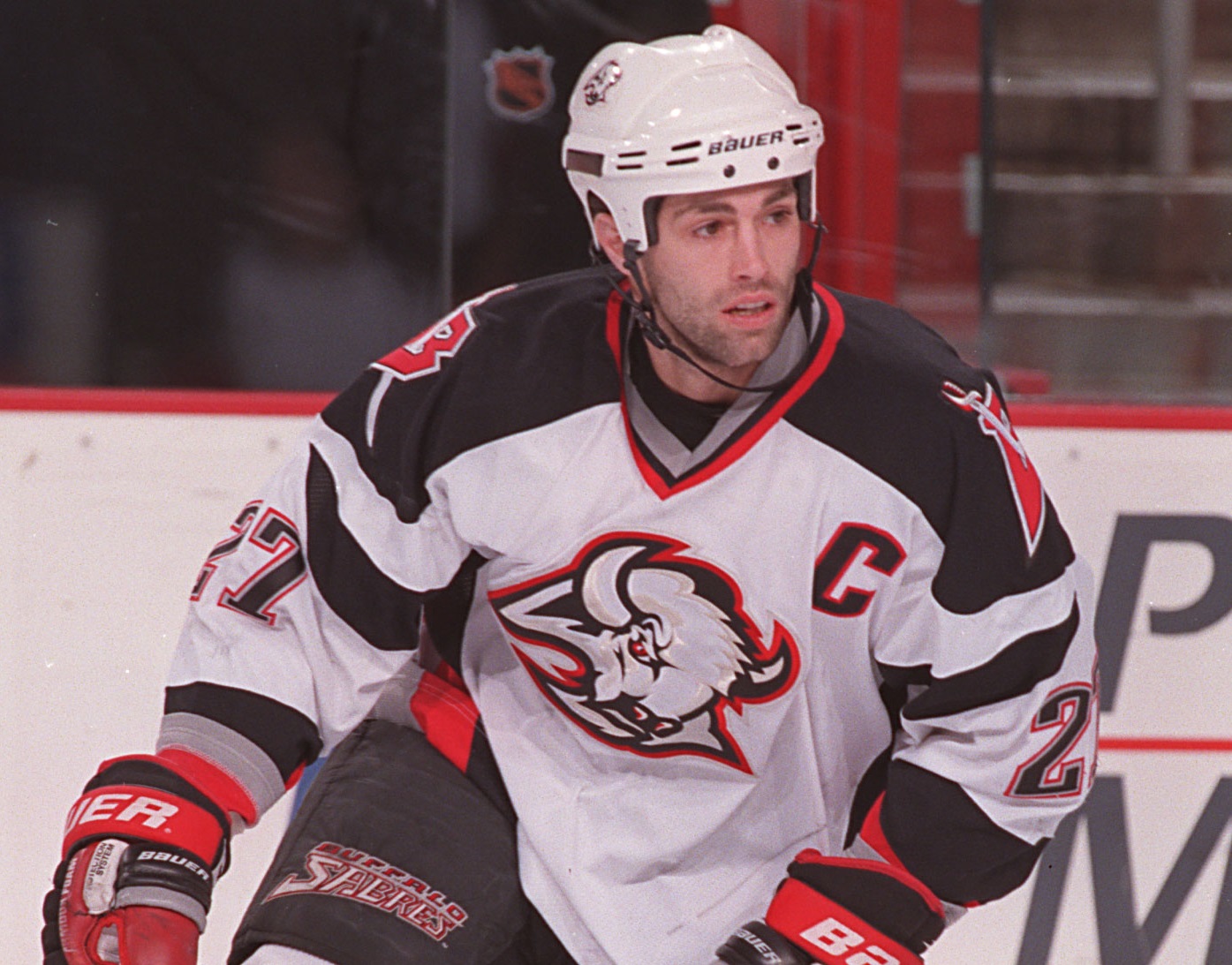 15. Phil Housley (1982-90): Picked sixth overall by Sabres in 1982 and played immediately as an 18-year-old, earning Rick Jeanneret's nickname of "Wowee Housley" over his eight seasons. Had 81-point campaign in 1989-90. Dealt to Winnipeg for Dale Hawerchuk after that season. Fourth in assists (380) and fifth in points (558) for Sabres. Highest-scoring U.S. defenseman and second overall among U.S. players with 1,232 points (behind only Mike Modano). Played 21 seasons overall with eight teams, retiring in 2003. Was fired in April after two seasons as Sabres coach and is now an assistant in Arizona. 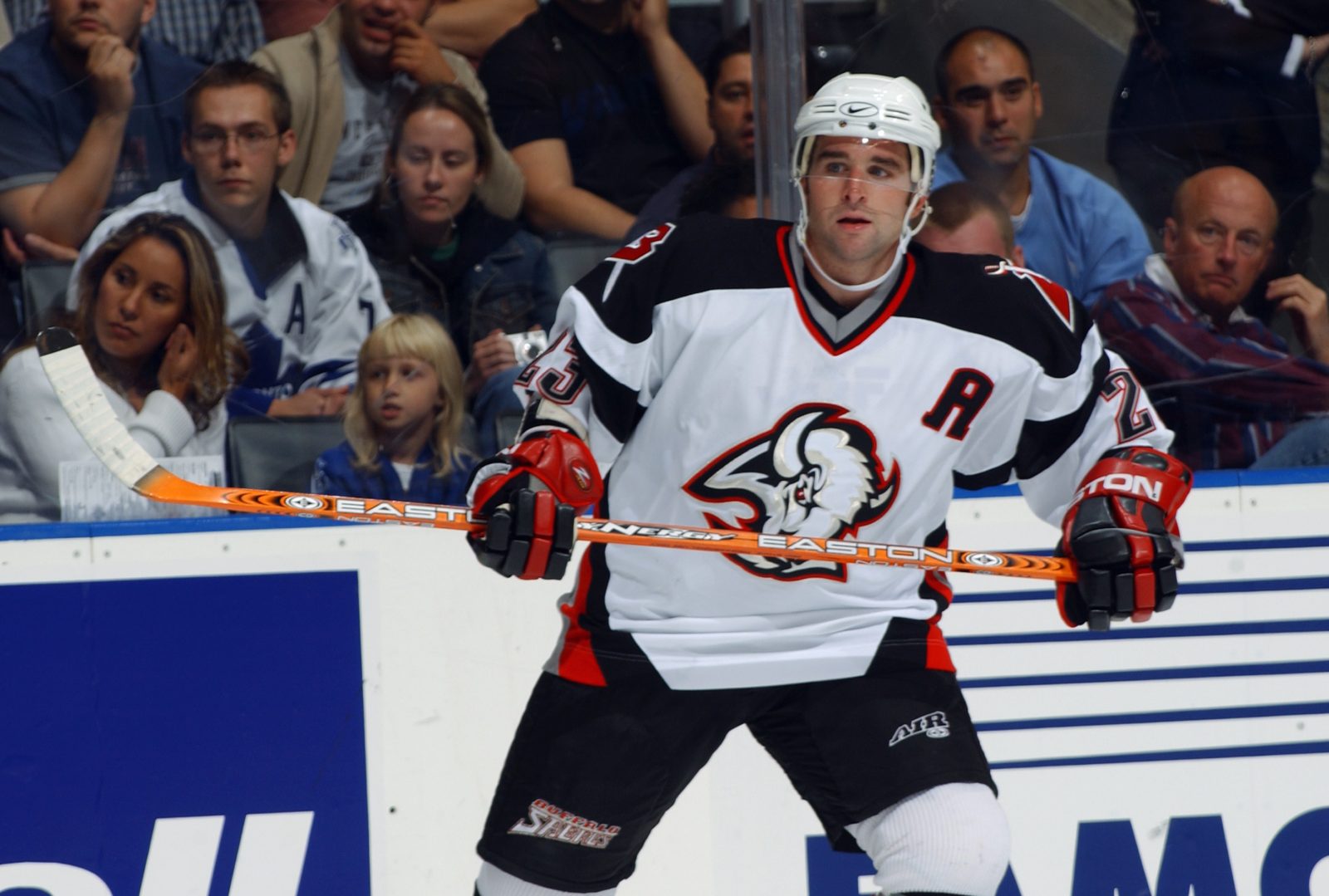 19. Bill Hajt (1973-85): Played all 854 career games with Sabres, second among Buffalo defensemen. Classic stay-at-home blueliner who had minus rating just once in 13 seasons. Had only two goals in 80 playoff games but one was game-tying tally in third period of '75 Fog Game vs. Flyers. 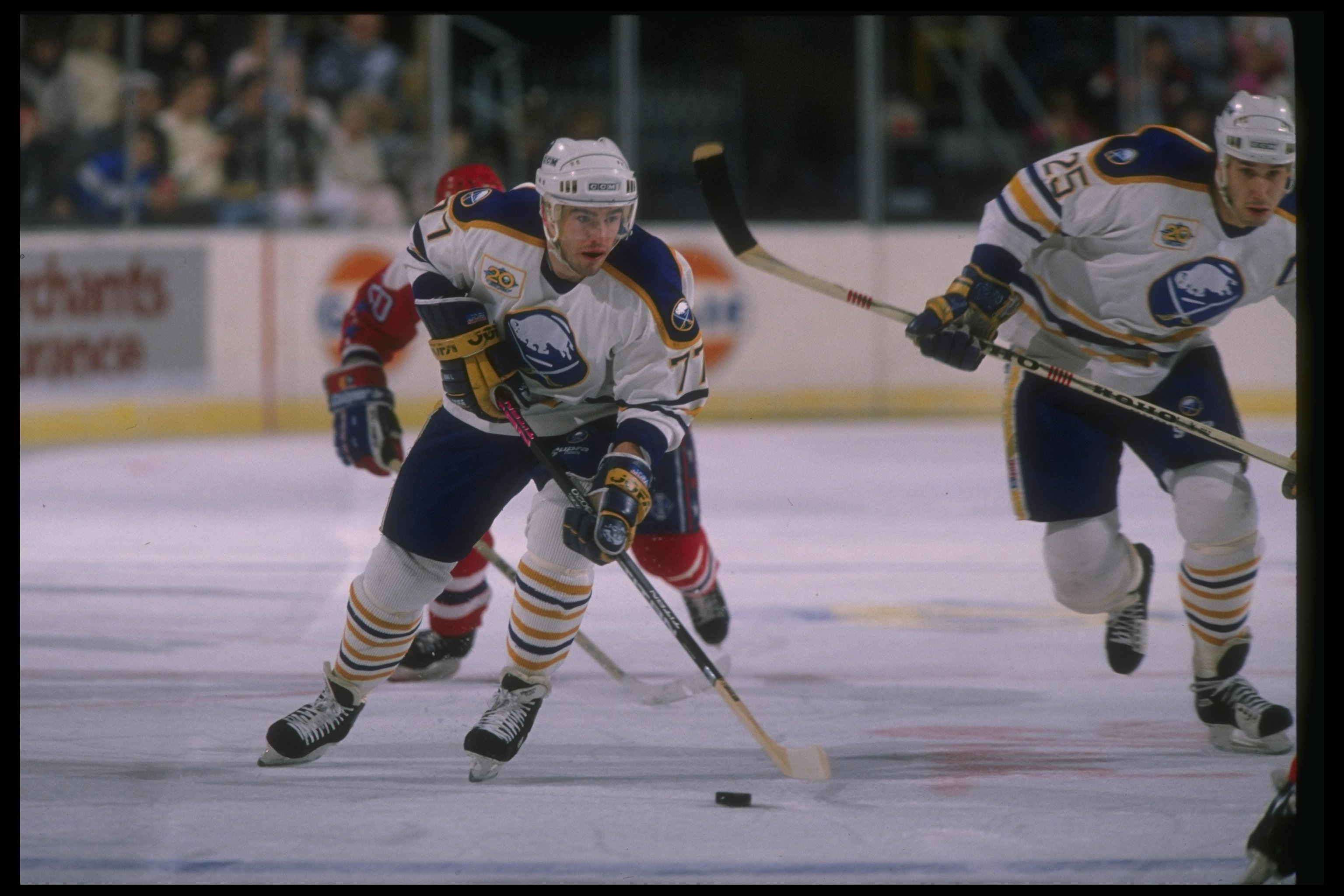 Pierre Turgeon moves the puck up ice with Hall of Famer Dave Andreychuk during a 1989 game in Memorial Auditorium (Rick Stewart /Allsport).

23. Tom Barrasso (1983-89): Came directly from high school in 1983 and was an instant star at age 18, becoming just third player to win Calder and Vezina in same season. Did not win a playoff series in Buffalo but blossomed as a money goalie over 12 seasons for Pittsburgh, winning two Stanley Cups. Retired in 2003.

24. Jack Eichel (2015-present): Check back at the 60th and see how much higher Eichel is ranked. Current Buffalo captain taken No. 2 overall in 2015 as result of tank season has posted four consecutive 20-goal seasons, with career highs of 28 goals and 82 points last year. Played for iconic Team North America in 2016 World Cup and signed franchise-record eight-year, $80 million contract extension in 2017.

27. Miroslav Satan (1996-2004): Slovak ranks eighth in team history with 224 goals, including a career-high 40 for 1999 finalists. Played eight years in Buffalo and beat Sabres with double-overtime goal for Boston in Game 4 of 2010 opening round. Served as general manager of Team Europe in 2016 World Cup and was elected president of Slovak Ice Hockey Federation in June. 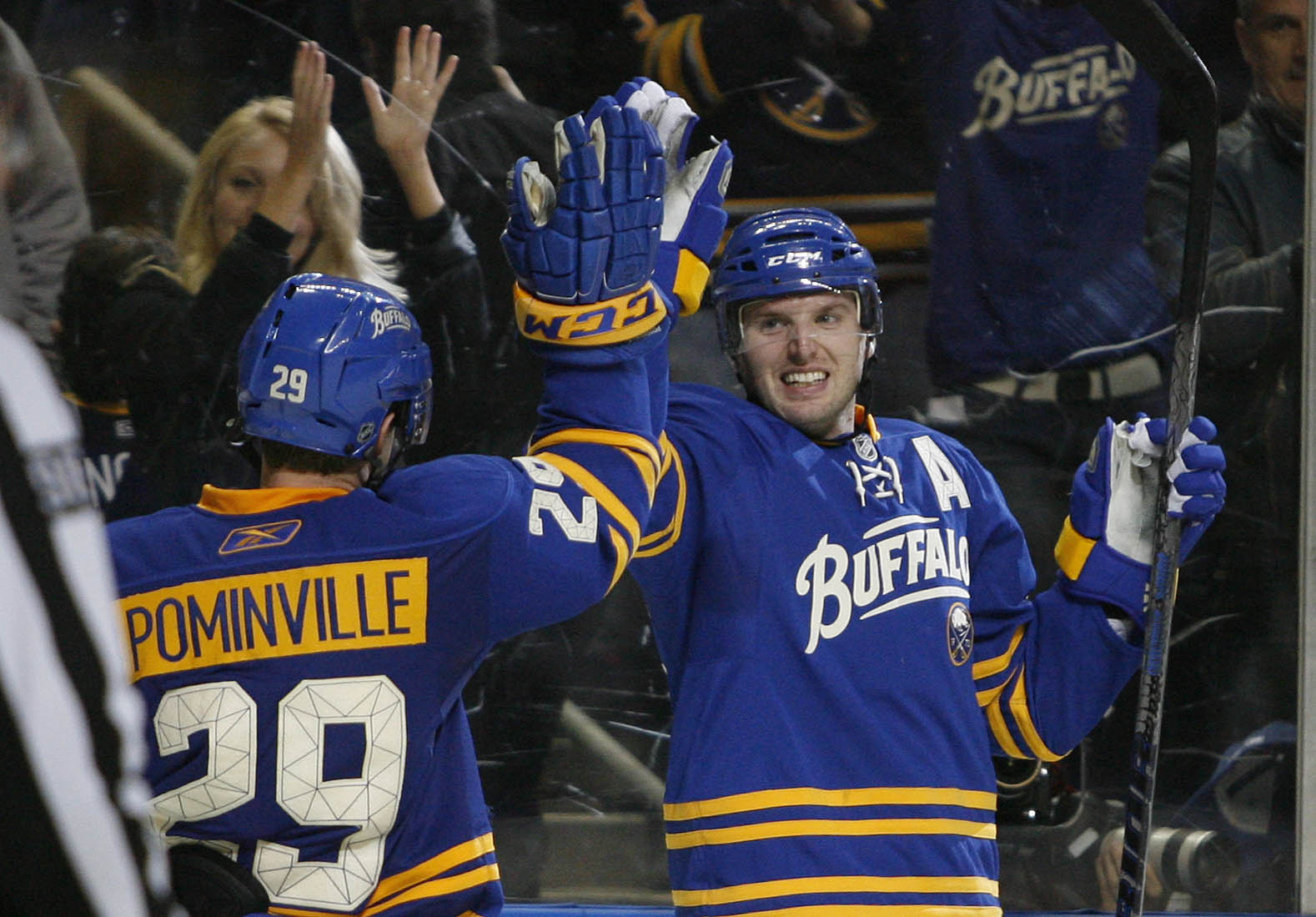 29. Brian Campbell (1999-2008): Ascended from sixth-round pick in 1997 to healthy scratch to mainstay on defense. Red-headed fan favorite nicknamed "Soupy" had 12 goals and 44 points for 2006 conference finalists. Scored only goal in 2008 Winter Classic but was dealt to San Jose at the trade deadline. Won Cup in Chicago in 2010 and retired in 2017. 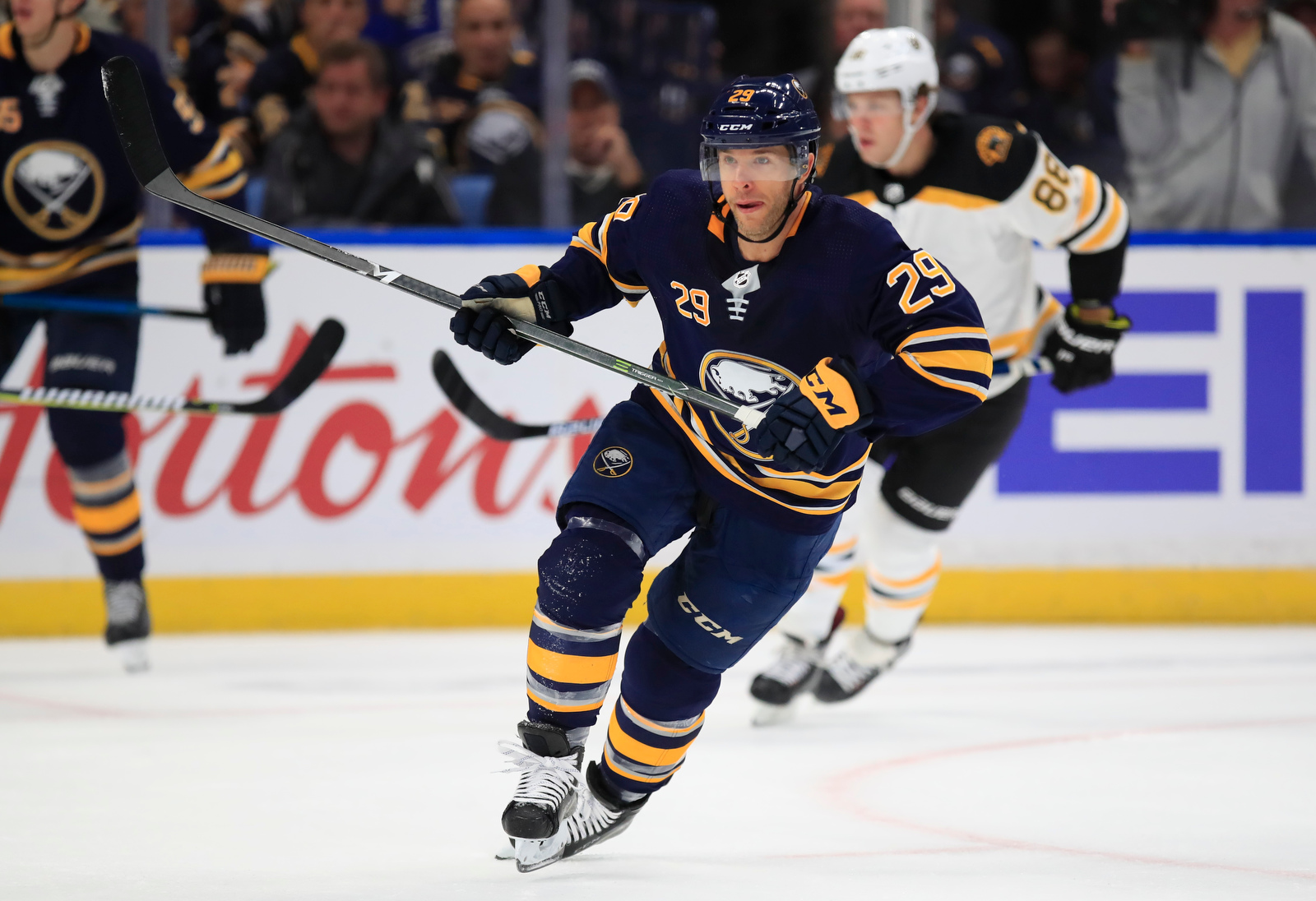 31. Larry Playfair (1978-86, 1988-90): Burly defenseman was one of the most feared blueliners in team history. Ex-No. 1 draft pick led the team in PIMs for six consecutive years. Played eight years for Sabres before 1986 trade to Los Angeles, then returned in 1988 for 46 games. Has served team as a broadcaster and leadership role with alumni association. 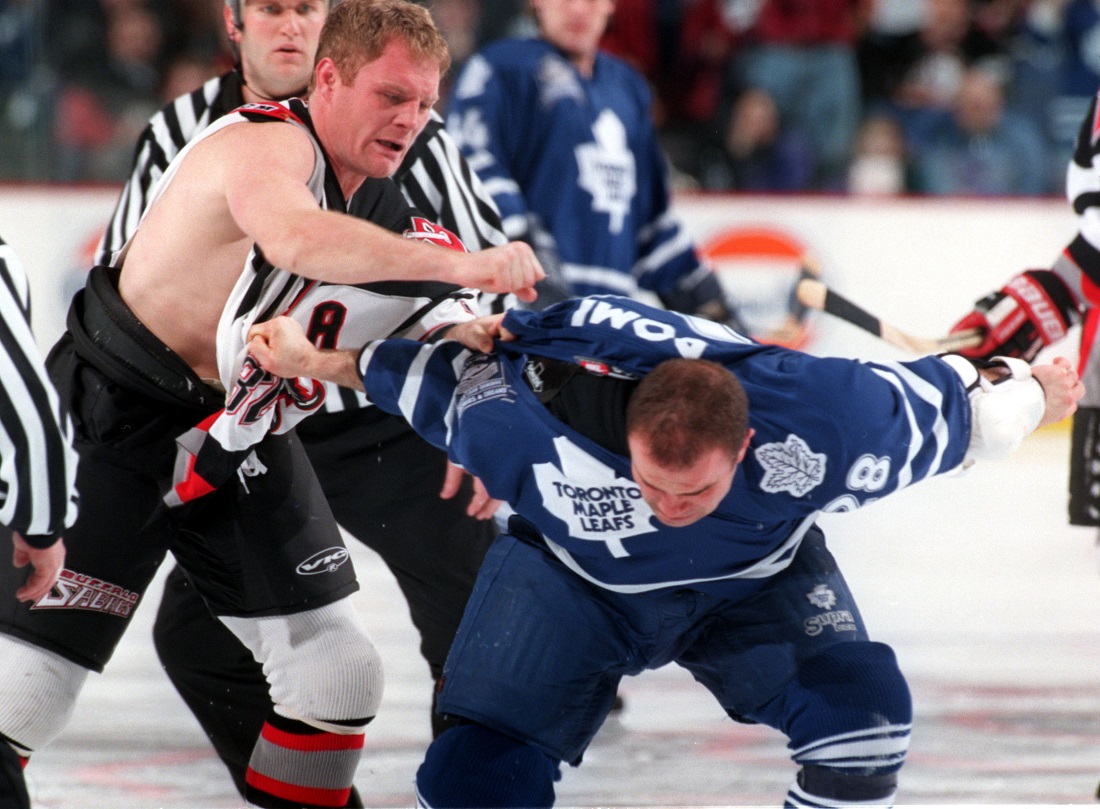 33. Jay McKee (1995-2006): Shot-blocker extraordinaire was Sabres' first-round pick in 1995 and played nine seasons. Missed Game 7 of 2006 conference final at Carolina with sudden infection in leg, an injury many believe cost team a Stanley Cup. Later played for St. Louis and Pittsburgh. Has been head coach of OHL's Kitchener Rangers since 2016.

34. Jim Lorentz (1971-78): Longtime beloved broadcaster was a sharp two-way forward for seven years during the glory years of the 1970s, scoring 161 goals. Had career-high 27 goals for 1973 playoff team and career-high 70 points for 1975 finalists, when he earned the nickname "Batman" for killing bat that swooped from Aud rafters during Fog Game against Flyers in Cup final.

36. Ric Seiling (1977-86): Best known as the guy Sabres took in the first round in 1977 instead of Hall of Famer Mike Bossy. Still put together a good two-way career for nine years and scored 176 goals with four 20-goal seasons. Longtime broadcaster for the Rochester Amerks and former coach of the Buffalo Beauts. 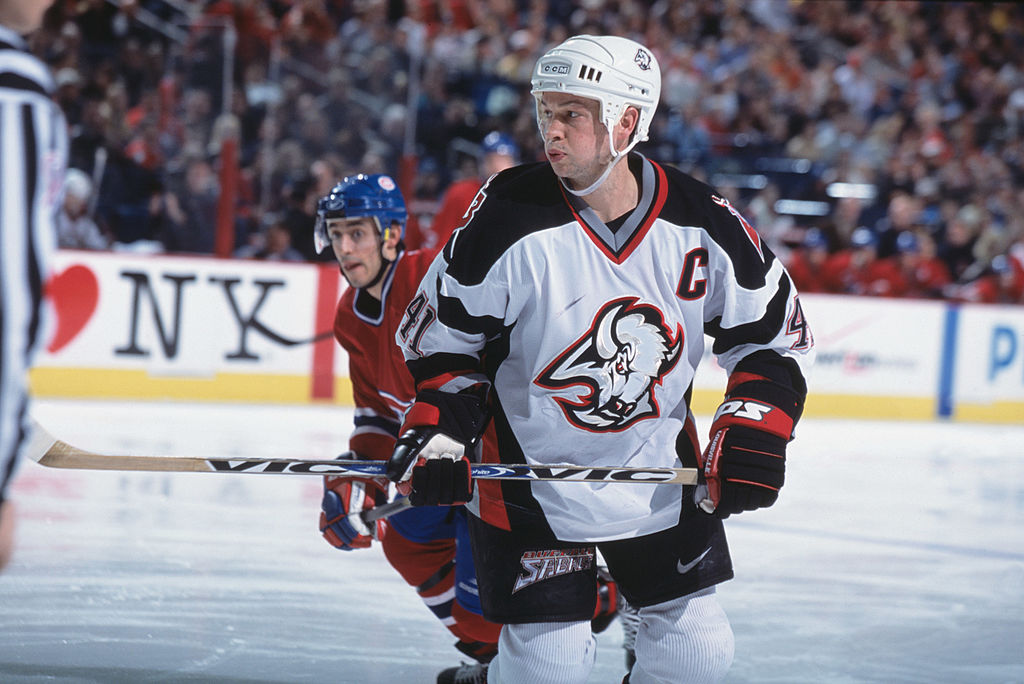 38. Stu Barnes (1999-2003): More than a decade after the "Luuuuuce" chants went quiet in the Aud, "Stuuuuuu" became the cry in Marine Midland Arena. Played parts of five seasons in Buffalo and eventually became captain in 2003. Scored seven goals in '99 playoffs, including lone Buffalo tally in No Goal game. Had 20 goals for Sabres in 1999-2000. Hired as pro scout by Seattle's NHL expansion team.

41. Lindy Ruff (1979-89): Hard-nosed rookie on the 1980 semifinalists went on to play 10 seasons here at both forward and defense, eventually becoming team captain before 1989 trade to New York Rangers. Had career high of 20 goals in 1985-86 – including four-goal game vs. Quebec. Endeared himself to fans forever for takedown of reviled Islanders goalie Billy Smith in closing game of 1980 semifinals. Coached Sabres for 17 years (1997-2013), making four East finals and the '99 Cup final, and is current assistant with Rangers.

43. Ryan O'Reilly (2015-18): Acquired in draft night blockbuster with Colorado in 2015 a few minutes before Eichel was selected, and signed to seven-year, $52.5 million contract a few days later. Had three consecutive 20-goal seasons but was key piece in controversial 2018 trade to St. Louis, where he was Stanley Cup, Conn Smythe and Selke Trophy winner in June while leading Blues to first title in their 52-year history.

46. Tyler Myers (2009-15): "The Big Easy" never lived up to the promise of his spectacular Calder Trophy season of 2009-10 when he scored a career-high 48 points. The tallest player in team history (6-foot-8), he was traded to Winnipeg in 2014 Evander Kane deal and signed with Vancouver as a free agent this summer. 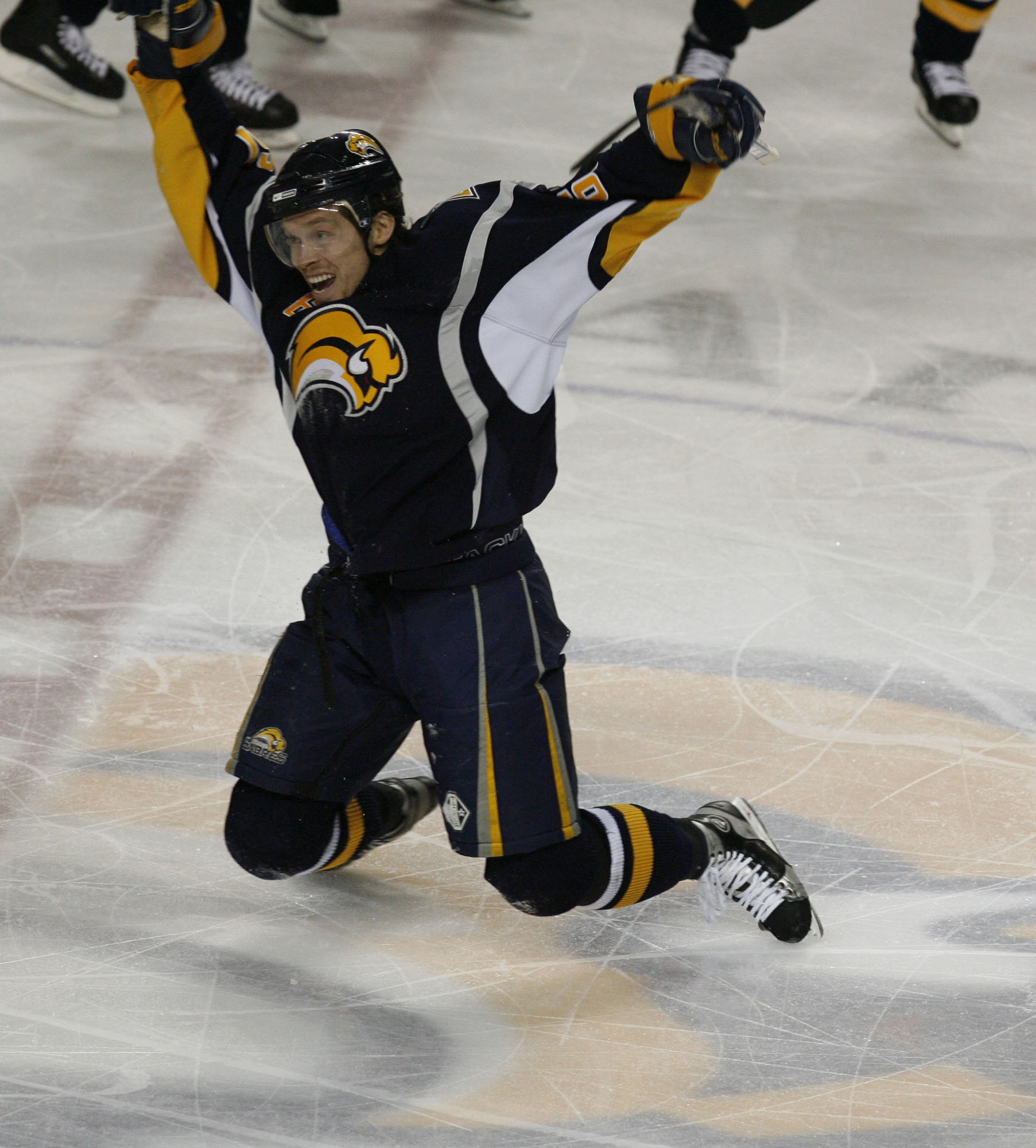 47. Maxim Afinogenov (1999-2009): Scored 134 goals in nine years, with three 20-goal seasons and a career-high 73 points for 2006 East finalists. Scored OT winner in Game 5 of '07 second round vs. Rangers after Drury's tying goal in final seconds of regulation. Turned 40 on Sept. 2 and scheduled to play 10th season in KHL with return to Moscow Dynamo.

48. Richard Smehlik (1992-2002): One of the most dependable blueliners on the late '90s teams, Czech native turned a fifth-round selection into a 589-game career. Played 83 playoff games with Buffalo and retired in 2003 after winning Stanley Cup with New Jersey.

49. Henrik Tallinder (2002-10; 2013-14): Mainstay on defense for nine seasons, playing 532 games, before heading to New Jersey for three years. Finished career after return to Buffalo for '13-14 tank season. Broken arm during '06 Carolina series was one of the major defense injuries that derailed that series. Most memorable goal was 2008 shootout winner vs. Martin Brodeur.

50. Rasmus Dahlin (2018-present): After one of the best seasons in NHL history for an 18-year-old defenseman, you have to include him on this list in a nod to the greatness the fan base feels will be coming from last year's No. 1 overall pick. If you do this list again in 10 years, is the stylish Swede in the top 20? The top 10?