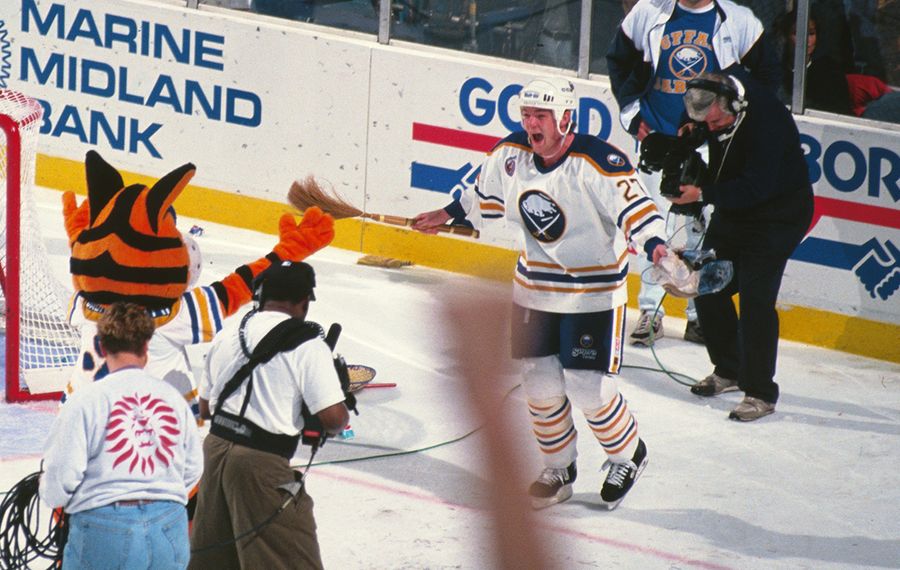 From playoff overtime winners that will stand the test of time — often because of Rick Jeanneret's iconic radio and TV calls — to some long-ago plays that still resonate in franchise annals, here's our list of the 50 most memorable goals in Buffalo Sabres history.

3. May 4, 2007:  Who else? Who else? With a 3-2 series deficit squarely in view, captain Chris Drury scores with 7.7 seconds left to pull the Sabres into a 1-1 tie with the Rangers in Game 5 of the second round in Buffalo. Maxim Afinogenov's overtime tally that produced a 2-1 win seemed like a matter of time, given the citywide euphoria after the tying goal. See the goals here.

9. May 5, 2006: Drury scores the fastest OT goal in franchise history, a snapshot at 18 seconds, to grab a 7-6 win at Ottawa in a wild opener of the second round as Sabres rallied five times to tie the score. See the goal here.

11. April 14, 1996: Farewell, Old Friend. This wasn't an official goal but is easily memorable to Sabres fans. After the final game is played at the Aud, a 4-1 win over Hartford, an elaborate closing ceremony is held. It ends with captain Pat LaFontaine skating and saluting the roaring crowd – and then sliding the puck into an empty net as the arena's goal horn let out one final series of blasts. See the goal here.

13. April 29, 1997: Derek Plante's slapshot at 5:24 of overtime gives the Sabres a 3-2 win over Ottawa in Game 7 of the first round in Marine Midland Arena. It remains the only Game 7 victory in franchise history. See the goal here.

14. Oct. 10, 1974: Danny Gare's goal 18 seconds into the season opener – three seconds shy of the NHL record for a rookie from the opening faceoff of his first game – sends the Sabres on their way to a 9-5 win over the Bruins in the Aud.

15. April 2, 1972: Gerry Meehan's goal with four seconds left in the season finale gives the Sabres a 3-2 win over Philadelphia, eliminating the Flyers from the playoffs when they only needed to hold on for a tie to qualify. See the goal here.

17. April 7, 1974: Rick Martin becomes franchise's first 50-goal scorer when he tallies at 8:39 of the first period of a 5-2 win over St. Louis in the season finale at the Aud. Martin tallies twice in the third period to complete a hat trick and finish with 52.

21. Jan. 24, 1978: A 2-for-1 as the Sabres host their only NHL All-Star Game. Martin scores the tying goal with 1:39 left and Perreault gets the winner in overtime – as Phil Esposito accidentally deflects a pass into his own net – to lift the Wales Conference to a 3-2 win over the Campbell Conference.

22. Feb. 13, 2009: Playing in front of an emotionally wrought crowd the night after the crash of Flight 3407 in Clarence Center, Pominville tips home Craig Rivet's shot from the point with 3.9 seconds left to forge a 5-5 tie against San Jose in a game the Sabres went on to win in a shootout, 6-5.

23. Oct. 5, 1989: Mogilny scores 20 seconds into his first NHL game as the Sabres beat Quebec in the Aud, 4-3. The goal is two seconds shy of Gare's '74 tally vs. Boston for fastest in franchise history by a rookie in his first game. See the goal here.

25. April 22, 2006: A return to the playoffs after a five-year absence is a triumphant one as Daniel Briere scores at 7:31 of the second OT to produce a 3-2 win over Philadelphia in Game 1 of the first round. See the goal here.

26. May 29, 1999: Popular enforcer Rob Ray scores on a tip-in with his back to the net as part of a three-goal second period in a 5-2 win over Toronto. That left the Sabres with a 3-1 lead in the Eastern Conference final. See the goal here.

28. April 9, 1976: Don Luce's goal at 14:27 of OT gives Sabres a 2-1 win over St. Louis and a 2-1 victory in the best-of-three preliminary round, a massive struggle for a heavily favored Buffalo club against Blues rookie goalie Ed Staniowski – who made 123 saves and posted a .946 save percentage in the three games.

29. Dec. 15, 1977: Perreault scores his 250th career goal with what might rate as the franchise's most spectacular deke, a right-handed move while warding off a defenseman to beat Los Angeles goalie Rogie Vachon. It was part of a hat trick to key a 7-3 victory in the Forum.

33. April 3, 1980: Gare scores his 53rd of the season in an 8-3 win over Quebec at the Aud to break Martin's franchise mark of 52. Gare would finish season with 56 and hold the franchise record for 13 years until Mogilny broke it.

34. April 9, 1983: Tony McKegney scores at 15:50 of the third period to snap a tie and send Sabres on to 4-2 win over Montreal in the Aud, completing a three-game sweep of their first-round series. It's Buffalo's last playoff win for 10 years.

39. April 10, 1988: One night after his four-goal output that included a penalty shot goal, John Tucker scores at 5:32 of overtime to give the Sabres a 6-5 win over Boston and even their first-round series at 2-2. The Bruins would win the last two games to take the series. See the goal here.

40. Dec. 21, 1991: Mogilny scores five seconds into a 4-1 win at Toronto to tie NHL record for fastest goal from the opening faceoff. See the goal here.

41. Nov. 27, 2018: Jeff Skinner corrals a loose puck and backhands it home to give the Sabres a 3-2 overtime win over San Jose and tie the franchise record of 10 consecutive wins.

42. May 5, 2001: Stu Barnes' goal at 8:34 of OT gives Sabres a 3-2 win over Pittsburgh and 3-2 lead in second-round series -- but Buffalo loses the final two games and doesn't return to playoffs for another five years. See the goal here.

44. Feb. 14, 2004: Mika Noronen tallies the only goal by a goaltender in franchise history, an empty netter in a 6-4 win at Toronto that saw the Leafs accidentally slide the puck the length of the ice into their unguarded cage. As the last Buffalo player to touch the puck, Norenen gets credit.

45. June 1, 2006: Jochen Hecht ricochets a puck home from behind the blue line with five seconds left in the second period to give the injury-riddled Sabres a 2-1 lead in Game 7 of the East final at Carolina. But we all know what happened in the third period.

46. Jan. 1, 2008: Brian Campbell's wrist shot from the right circle in the second period is the Sabres' first outdoor goal and their only one in a 2-1 shootout loss to the Penguins at the inaugural Winter Classic in Ralph Wilson Stadium. See the goal here.

47. Oct. 8, 2015: Jack Eichel scores his first NHL goal in the period of his first NHL game, but the first offside challenge in a Sabres game takes away Evander Kane's potential tying goal and Sabres lose to Ottawa, 3-1. See the goal here.

48. Dec. 23, 2013: The Butt Goal. Defenseman Mark Pysyk is credited with the overtime goal in a 2-1 win over Phoenix after the puck flops through the air, lands into the back of goalie Mike Smith's pants and Smith carries it into the net. Video of the play quickly goes viral.

49. April 22, 2011: Rookie Tyler Ennis' goal at 5:31 of OT gives Sabres 4-3 win at Philadelphia and 3-2 lead in first-round series in what remains Buffalo's last playoff win. Sabres would lose last two games of series and have not been in postseason since. See the goal here.