WASHINGTON – Rep. Chris Collins breezed through "Buffalo Nite in Washington" last week as if it were just any other Buffalo Nite. He gripped. He grinned. He noted that the chicken wings seemed better this year than they were in earlier years.

Then, later in the week, he went to his office in the Rayburn House Office Building and collected some of his most prized personal possessions.

That was the only sign that those close to Collins had that the Clarence Republican, after 14 months of proclaiming his innocence and decrying "fake news," was about to resign and plead guilty.

In retrospect, though, sources who know Collins well said they should have seen his guilty plea, and resignation, coming.

[Related: 'I let them down,' Chris Collins says of family, constituents after pleading guilty]

Everything changed, they said, on Sept. 3, when federal prosecutors in Manhattan sent a letter to the judge. In that letter, prosecutors suggested breaking the Collins insider trading trial in two – and putting the congressman's son, Cameron, on trial before him.

That meant Cameron Collins quite possibly would face jurors while his father was continuing to fight his own indictment.

That would maximize the legal danger that Cameron Collins faced – so the congressman picked a safer alternative. He agreed to plead guilty in hopes of minimizing his son's legal risk.

"He had to do this to protect Cameron," said one source with longtime ties to Collins. 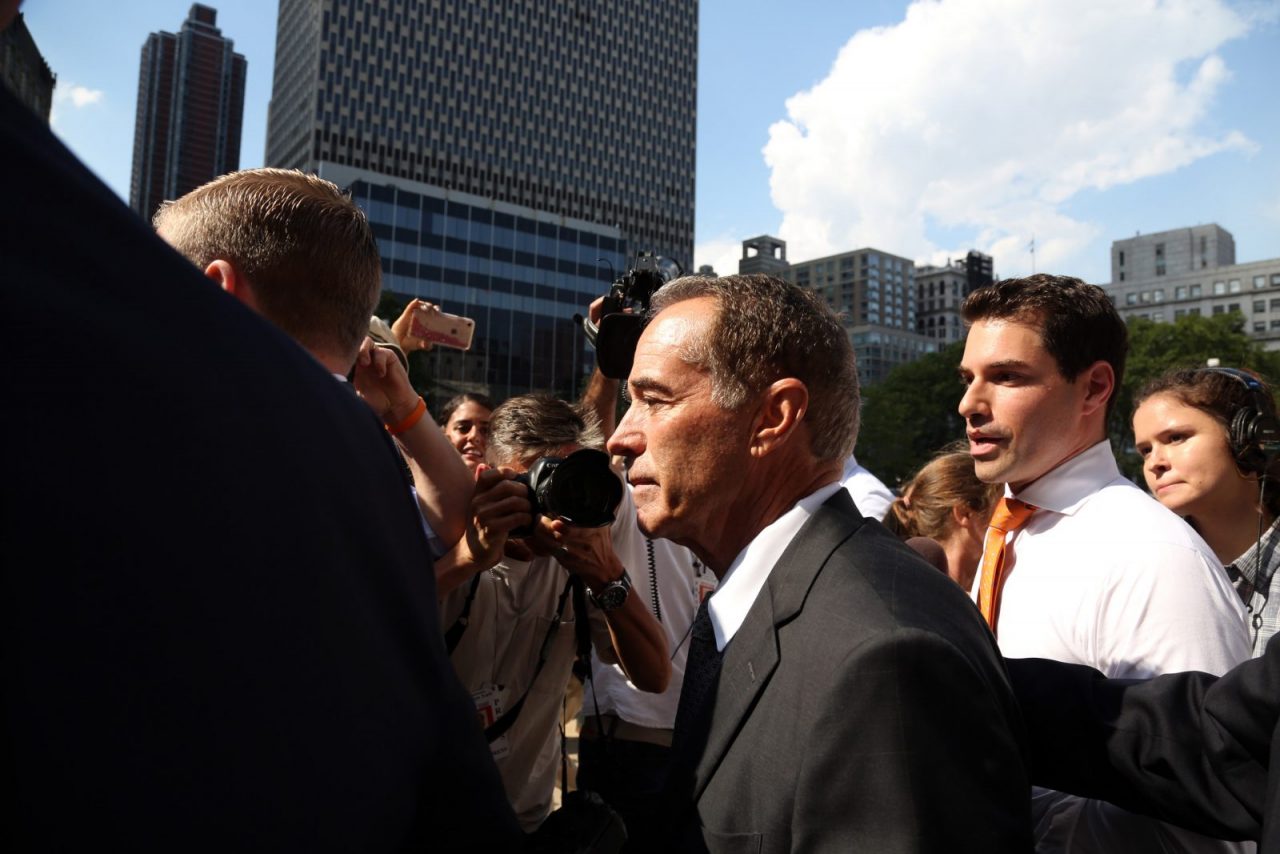 Rep. Chris Collins leaving a federal courthouse in New York City after his arrest in August 2018. (Jefferson Siegel/Special to The News)

Collins pleaded guilty Tuesday in a Manhattan courtroom to charges of conspiracy to commit securities fraud and making false statements, charges he long disputed. He now begins an agonizing wait for the sentence Judge Vernon S. Broderick will hand down Jan. 17.

Cameron Collins, as well as his prospective father-in-law, Stephen Zarsky, will change their pleas in a separate court hearing Thursday.

All of this came as a surprise to the politicos closest to Collins.

Four people with intimate knowledge of Collins' office operations, all questioned on the condition that they not be identified by name or title, said they had no forewarning that Collins was about to plead guilty.

But two of them noted that late last week, Collins started collecting some of his things from his Washington office. He cleaned his desk, too.

Those who noticed that didn't make too much of it until Monday morning, when reporters discovered a sudden and shocking filing in the court docket in the criminal case against Collins.

One of Collins' closest allies heard that news when a Fox News reporter called. Another learned of it through a Buffalo News tweet.

With no word from Collins himself, staffers at his Washington office soon realized their boss would likely resign.

Finally, Collins called his chief of staff, Erynn Hook, and told her of his plea deal and resignation. Collins left it to Hook to tell his staff the news.

The understandable reaction? Shock and sadness, said one person close to Collins.

For months, Collins made a concerted effort to look like a congressman hard at work, even though he was barred from serving on congressional committees after his arrest. He filled his schedule with meetings with interest groups and appearances at events in his district where he knew he would feel welcome, and he filled his Twitter feed with all of it. 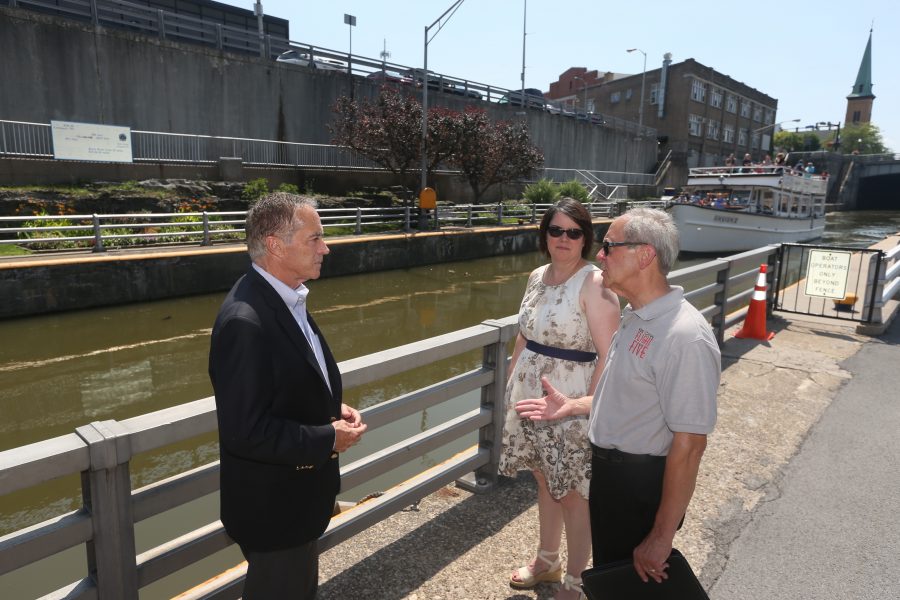 Collins even talked openly of running for a fifth term in Congress in 2020, thereby making his unexpected plea deal and resignation all the more shocking to his staffers and supporters.

But with that shock came a degree of understanding. Two of the people interviewed for this story said that in retrospect, it's clear that Collins' decision to plead guilty was tied to the prosecutors' decision to try to break the trial in two.

Collins' own defense strategy prompted prosecutors to make that move. For months, Collins' lawyers had argued that prosecutors had trampled his rights under the Constitution's speech or debate clause, which aims to protect federal lawmaking activities from undue interference from the other branches of the federal government.

Prosecutors took that argument seriously. In early August, they even filed an updated indictment, dropping some of the charges as well as references in the previous indictment that the Collins team said amounted to speech or debate violations.

But the prosecutors' key strategic move seems to have come in the Sept. 3 letter to the judge, which was based on a cold, hard truth: the speech or debate clause may offer some protection to members of Congress, but it gives no legal cover to their sons or daughters.

That meant Collins' son was potentially in more legal trouble than he was. And to hear prosecutors tell it, it's all because of the calls Collins made to his son, Cameron, from a White House picnic on the evening of June 22, 2017. 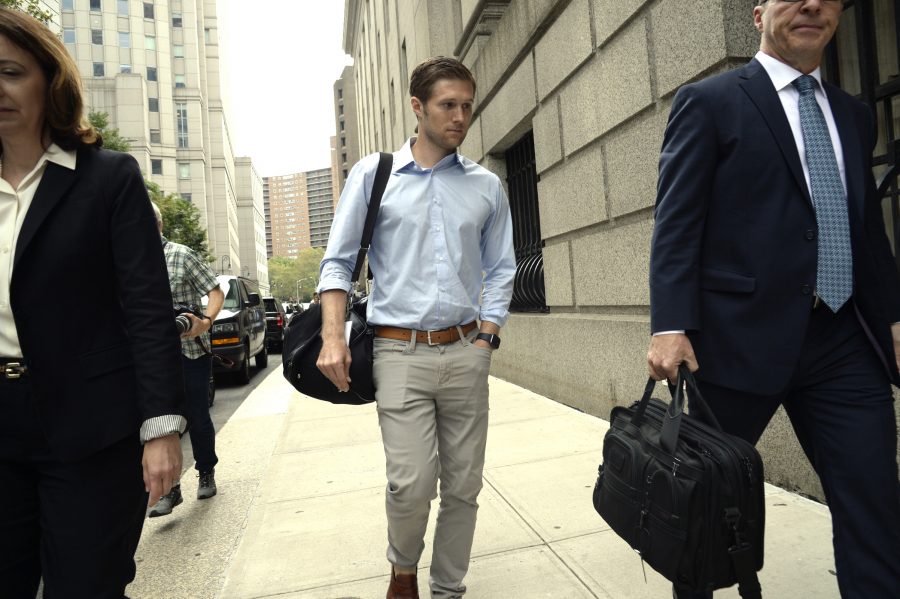 Cameron Collins leaves Federal District Court in Manhattan after a hearing on his case on Sept. 12. (Jefferson Siegel/Special to The News)

Prosecutors say the congressman called his son immediately after getting an email from the CEO of Innate Immunotherapeutics, an Australian biotech firm where Collins served on the board. That email included devastating news.

Innate's only product, an experimental drug for multiple sclerosis, had failed in clinical trials. That meant Innate's stock, which had skyrocketed in the previous year, would certainly crash back down to earth as soon as the bad news became public.

The News wrote about apparent insider trading in Innate stock the following week, and federal investigators noticed it, too. Collins, his son and Zarsky were arrested a little more than 13 months later, on Aug. 8, 2018. Prosecutors charged them with wire and securities fraud, conspiracy and lying to the FBI.

Collins immediately proclaimed his innocence and has done so ever since. But he pleaded guilty, two sources said, to forego the legal risk and family agony of seeing his son go before jurors before him.

That seemed likely to happen after Broderick, the judge, curtly dismissed a defense motion Sept. 11 seeking more evidence on possible speech or debate violations, and after Broderick expressed some willingness to break the trial in two.

That left Collins facing the prospect of watching his son go on trial while his appeal of Broderick's ruling languished before the 2nd U.S. Circuit Court of Appeals.

"That letter from the prosecutors (about splitting the trial in two), and the judge's decision, brought us to where we are today," one source close to Collins said.

Collins pleaded guilty to two of the 11 counts in the indictment against him. Cameron Collins and Zarsky will enter guilty pleas on Thursday, although it is not yet known to which crimes.

Yet even with Collins' sudden decision to plead guilty and leave Congress, one thing hasn't changed, said the source who noted the impact of the prosecutors' letter.

Collins has said for 14 months that he's innocent – and he still believes it.

"He still thinks he didn't do anything wrong," that source said.

'I let them down,' Chris Collins says of family, constituents after pleading guilty