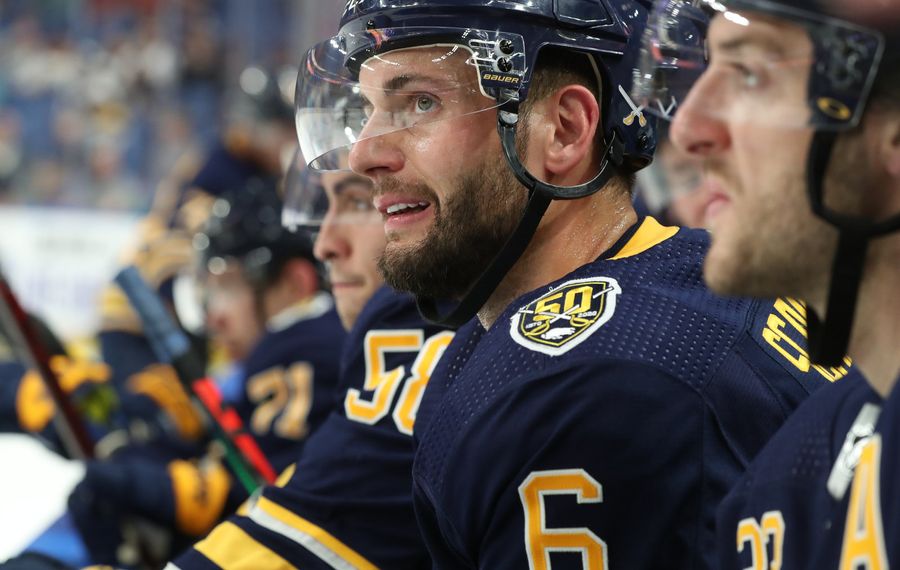 When he arrived from Minnesota in 2017, Marco Scandella instantly became a mainstay on the Buffalo Sabres' defense. He played all 82 games for the first time in his career in 2017-18, but struggled to stay on the ice last season.

Frustration was everywhere for the Sabres and Scandella was no different, as he battled through injuries and played in just 63 games, equaling his fewest for a full NHL season.

It ended when Scandella took a shot on the ankle in the Sabres' March 30 loss to the New York Islanders and sat out the last four games. He had surgery to repair the ankle early in the offseason and said his summer training went well.

The exhibition season has proved that. Scandella, 29, has shown better movement as part of a Buffalo blueline playing with more pace under new coach Ralph Krueger. It's a crucial season for Scandella, playing on the last year of a contract that carries a cap hit of $4 million.

"I've been feeling 100 percent on the ankle and I was able to spend a lot of time in the summer working on my skating," Scandella said after the Sabres' 45-minute practice Sunday morning in KeyBank Center. "I've felt really good out there. Last year is last year. You have to forget about it and take this as a new season.

"I definitely went into the summer looking to improve in areas and I came ready to camp. This is a big season. It's a great group of guys, it's a new coach, still a great situation. You have to embrace it."

In the preseason this year, Scandella averaged 19:25 per game and joined Rasmus Dahlin, Colin Miller and John Gilmour in playing four of the six games. Only Henri Jokiharju played five.

"You can feel the veterans ramping it up as we get closer to the start of the regular season," Krueger said after the final practice of his first camp in Buffalo. "They're experienced players where we expected that curve to continue upwards. Marco is one of many going to a new level here as we near the kickoff. We're excited to see that curve continue."

After Will Borgen was sent to Rochester, the defense group on the ice Sunday might be how the Sabres stage their roster for Thursday's opener in Pittsburgh. Dahlin and Miller were on one pair with Jake McCabe and Rasmus Ristolainen on another. McCabe sat out the last two games with an upper-body injury as a precaution but is expected to be ready for the season.

Scandella played with Jokiharju while Casey Nelson skated with speedy camp surprise Gilmour, who is pushing hard for a spot and might not clear waivers if the Sabres try to send him to Rochester.

"There's a lot of speed on our team," Scandella said. "We have a lot of puck-moving defensemen with big bodies and we should have a really good transition game. An addition like Miller is great for us. He's a veteran player, a great guy in the room too, and that's only going to help our team."

Scandella even punctuated his preseason with his first goal in Saturday's 3-2 shootout win at Pittsburgh, firing a blistering slapshot from the left circle that burned Penguins goalie Matt Murray and started Buffalo's comeback from a 2-0 deficit.

"If I have time, I am winding up," Scandella said. " 'Joki' made a good play to get it to me early and give me time. I was able to get my head up and pick a corner. When you get to walk in like that with a slapshot and put it where you want to go, you've got a good chance."

Scandella said he has been impressed with the tempo Krueger has used at camp. The coach admitted Sunday he forced players to practice fully even if they were the game group for that night, something that obviously will change during the regular season.

"We're not waiting around as much. We want to be a high-pressure team using our skating to our advantage," Scandella said. "We've got a lot of fast guys and we're not playing an easy system. Everybody has got to work or else you'll have holes in your game.

"You have to be sharp out there. I feel like we're practicing the way we want to be playing. We're not taking shifts off, not taking drills off. We're all trying to show what they can do for a new coach and that's made it a competitive camp. Now you have to take that energy going forward."

The Sabres started practice at 8:40 Sunday morning – earlier than any workout in recent years that veteran observers could recall. They had a 10:15 a.m. bus to New Era Field, where Krueger and many of the players were taking in the Bills-Patriots game.

The team will be off Monday. Krueger said the coaching staff and front office was scheduled to commence their roster decision summit Sunday night and work through Monday. The Sabres must be cap-compliant and have the roster down to the NHL maximum of 23 players by 5 p.m. Tuesday and Kreuger said it's possible there could still be extra players at practice Tuesday morning.

"We'll need everybody that's here at camp now somewhere during the season," Krueger said. "I want to underline whatever we decide the next couple of days, that's far from an end. The competition will continue and the competition will be fierce right through the season."

Winger Conor Sheary stayed out of practice and skated on his own Sunday. Krueger said the Sabres will continue to evaluate Sheary this week.

Defenseman Will Borgen was assigned to Rochester.