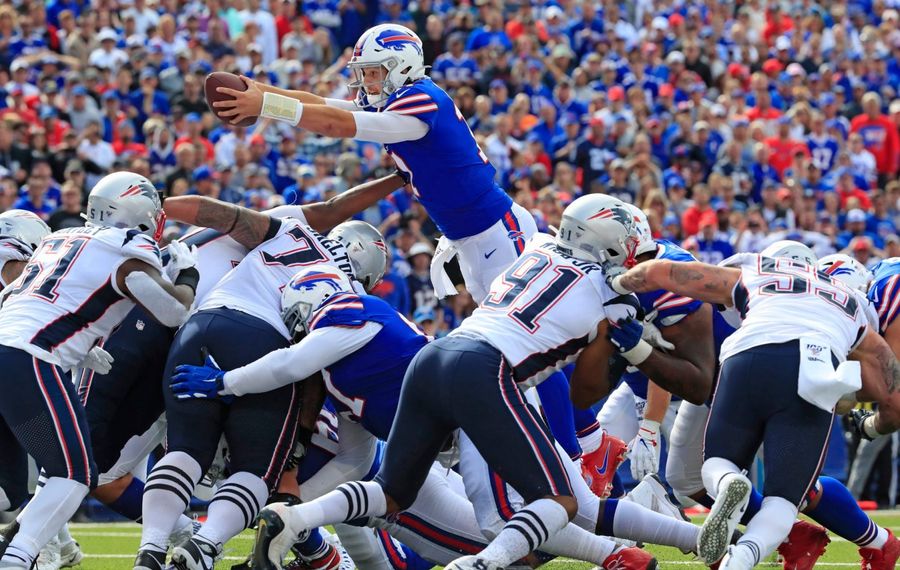 Here are my hot reads from the Buffalo Bills' 16-10 loss against the New England Patriots Sunday at New Era Field:

Let's start with Josh Allen. Before leaving the game after taking a vicious-looking helmet-to-helmet shot, he was having what, at times, was one of the uglier performances of his 15 NFL starts. He threw three interceptions, he had a fumble that he was lucky offensive lineman Cody Ford recovered, and badly overthrew receivers several times.

Allen was fortunate the Bills' defense showed up to play. Tom Brady struggled all day, with the Patriots generating only one offensive touchdown and going three-and-out seven times in 11 drives.

Matt Barkley took Allen's place with 14:26 left in the fourth quarter after cornerback Jonathan Jones' helmet-to-helmet hit on Allen. Allen ran off to the locker room, for what was announced as an evaluation for a head injury, and didn't return.

Barkley had some moments, but after the Bills took over with 3:09 left, he got them as far as the New England 39 before throwing an interception to end the game.

As a whole, the Bills' defense did an amazing job, especially considering the opponent.

The inclination is to give big props to Micah Hyde for intercepting a 2-yard Brady pass in the end zone, but this was more a mistake on Brady's part. He seemed to be looking for Julian Edelman, but threw it right to Hyde.

After Hyde's interception, Frank Gore had a 41-yard run and five yards were added to the play for an illegal-hands-to-the-face penalty on New England. Gore surpassed 15,000 career yards on the play. However, the Bills only cashed in with a 46-yard Stephen Hauschka field goal to make it 13-3 with 1:55 left in the half.

Rookie tight end Dawson Knox made another big play with his 21-yard reception on third-and-4 from the Patriots' 47 with 53 seconds left. Hauschka then was wide left on a 49-yard field-goal attempt.

The Patriots gained just 224 yards, their sixth-fewest yards in the Bill Belichick era, and their fewest since 2009.

Allen's first interception ended the Bills' first series and set up the Patriots' touchdown drive. He threw his second pick when, with Zay Jones wide open, he hesitated and floated a pass for an easy pick by J.C. Jackson. The Patriots went three-and-out this time.

Allen's third interception, second to Jackson, came late in the third quarter when he rolled to his right and heaved it toward the sideline. Jackson jumped and, upon landing, kept both feet in bounds. That set up a 23-yard Stephen Gostkowski field goal to give the Patriots a 16-10 lead with just less than a minute left in the third quarter.

Allen was again off the mark when he overthrew a wide-open Cole Beasley on a sideline route on third-and-6 from the New England 42.

The Bills hit the road for the second time this season when they travel to Nashville to face the Tennessee Titans next Sunday.

After that, the Bills have their bye week, followed by a return home to face the Miami Dolphins.