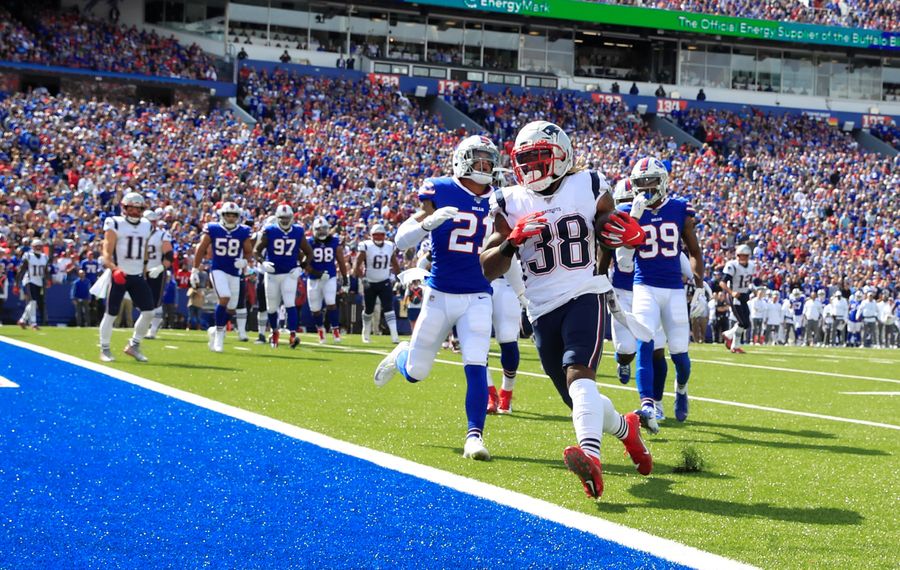 Buffalo Bills running back Frank Gore is something else. He surpassed 15,000 career rushing yards, finishing with 109 yards on just 17 carries. The 36-year-old averaged 6.4 yards per rush, and hit his milestone with a classic, 41-yard run in which he knifed through the middle of the New England Patriots’ defense and bounced off of multiple tackle attempts. Quarterback Josh Allen carried five times for 26 yards before being knocked out of the game on his final rush attempt. There are times Allen subjects himself to unnecessary punishment as a runner, but this wasn’t one of them. He can’t be faulted for trying to pick up a first down in a tight game. Through the first four games of the season, the Bills are averaging 151.3 rushing yards per game – No. 5 in the NFL. It’s safe to say they really don’t miss LeSean McCoy, especially considering the running game should only get better when Devin Singletary returns from injury.

This was an ugly effort by Allen, who was in the process of playing the worst game of his career before getting hurt. He went 13 of 28 for 153 yards and three interceptions – a 24.0 quarterback rating that is by far the worst of his career. Allen says every week he’s going to learn from his mistakes and stop making throws across his body, but it’s difficult to believe him at this point. His tremendous arm strength means precisely nothing if he can’t be more accurate with the football. It got to the point Sunday where on-target throws were a pleasant surprise. Matt Barkley completed 9 of 16 passes in relief of Allen, but his lack of mobility really stands out. For an offensive line that is struggling mightily against the blitz, that’s bad news, especially if Allen misses time. Tight end Dawson Knox was a bright spot, making three catches for 58 yards. T.J. Yeldon flashed his value as a receiver, making four catches for 68 yards. Even when Devin Singletary returns, it would be nice if the Bills find a way to use Yeldon in the passing game.

The Patriots’ Sony Michel took a handoff on the first play from scrimmage for 15 yards, but the Bills’ run defense stiffened after that. New England did not have another 10-yard run in the game, finishing with 23 carries for 74 yards, an average of 3.2 yards per rush. Star Lotulelei had a tackle for no gain early in the game. Middle linebacker Tremaine Edmunds played his best game of the season, finishing with a team-high 11 tackles, two of which went for losses. Safety Jordan Poyer again was solid in run support, making six tackles, a few of which were close to the line of scrimmage. The loss of Harrison Phillips last week did not hurt the Bills against New England. The run defense did give up a touchdown run on a jet sweep and 9 yards on an end around.

As good as it gets against Tom Brady, who looked human in going 18 of 39 for 150 yards and one interception. Brady averaged 3.8 yards per attempt – the lowest in a win in his career. Outside cornerbacks Tre’Davious White and Levi Wallace limited Patriots receivers Josh Gordon and Phillip Dorsett to five catches for 56 yards on 16 targets. The Bills allowed two big plays in pass defense – a 26-yard completion from Brady to James White on a perfect throw over the close coverage of Matt Milano. Milano later made some terrific plays in coverage against White, who is one of the more underrated players in the league. The other big New England play was a 31-yard completion to Gordon that the Bills challenged unsuccessfully for offensive pass interference against tight end Matt LaCrosse. Micah Hyde perfectly read Brady to come up with an interception in the Buffalo end zone. Hyde may have been the best player on the field Sunday. The one disappointment for the pass defense was a zero in the sacks category. Lorenzo Alexander, Ed Oliver and Shaq Lawson had quarterback hits, but the Bills couldn’t get to Brady in time.

The Bills lost a six-point game in which they had a punt blocked and returned for a touchdown and their kicker missed a 49-yard field goal. That sums up their day pretty well. It was the first time since Nov. 20, 2011, that the Bills have allowed a blocked punt for a touchdown. Corey Bojorquez may want to update his resume. He had five punts for 180 yards – a net average of just 26.7 yards. That included an ugly 21-yard punt in the third quarter. Siran Neal was flagged for a block in the back with 3:09 left in the fourth quarter, backing up the Bills to their 14-yard line on a possession that would require a touchdown. The lone bright spot was returner Andre Roberts, who averaged 35.5 yards on two kickoff returns and gained 46 yards on six punt returns, with a long of 13 yards. Roberts made the first man miss several times, and with better blocking might soon break one of those opportunities.

Two more lost challenges by Sean McDermott. Spending all three second-half timeouts by the first play of the fourth quarter, not to mention wasting first-half timeouts as the play clock wound down and on a lost spot-of-the-ball challenge. The lack of timeouts led to a delay of game inside the New England 10-yard line in the fourth quarter, again because the play wasn't called in time. There was a maddening amount of pre-snap penalties, including two false starts by blocking tight end Lee Smith (who also got whistled for holding). There was a critical breakdown on special teams. There was an inability by Allen – and by extension offensive coordinator Brian Daboll – to handle pressure from the opposing defense. Daboll also hasn’t been able to coach the dumb decisions out of Allen’s game, although no coach might be able to do that. This is a game the Bills should have won based on their defensive effort. They didn’t, with coaching shortcomings playing a major reason why.