UNITED NATIONS — Three old Republican friends were standing around the lobby of a secure hotel on the eastern edge of Manhattan one afternoon last week. They sipped coffee as diplomats, foreign officials, politicians and ear-bugged agents milled about. A bomb-sniffing dog, with an officer in tow, meandered by.

A news alert popped on Michael Caputo’s phone. “They’re going for impeachment,” Caputo said to Joel Giambra, the former Erie County executive, and John Zagame, a retired politician and lobbyist who lives in the Albany area. To Caputo, the impeachment decision was a relevant one; he was an early campaign aide for Trump and retains ties to the president. But Caputo didn’t fixate on that news. He’s working for a different president now, and all three men were waiting for him.

Their friend Mohamed Abdullahi Mohamed is the president of the eastern African country of Somalia. Mohamed is also a longtime Western New Yorker and former employee of the state Department of Transportation who, until he became president of his home country in 2017, was a Grand Island resident. He was in town for the United Nations General Assembly, and finishing a lunch with fellow heads of state.

Mohamed’s wife, Zeinab Abdi, who still lives with their children on Grand Island, walked by and said hello to her husband’s friends before heading to an elevator. Minutes later, President Mohamed arrived. He entered through a side doorway separate from the public and was surrounded by an entourage that included multiple security agents.

“Mr. President!” Giambra greeted him warmly. (In more private company, Giambra, who was the president’s boss and friend back in Buffalo, still calls him “Mohamed” or even “dude.”)

Mohamed said hello to Giambra, then turned to Caputo.

“Mr. President,” Caputo responded. “How are you?”

Mohamed noticed Zagame, whom he hadn’t come across in several years. “Good to see you,” he said to Zagame. “Long time no see!”

These were routine greetings among people who hadn’t intersected in a long time. It would be easy, especially for political types, to flip a charm switch for these moments. But the president seemed genuinely pleased to be reconnecting with American friends who, other than perhaps Caputo’s work on Somalia’s behalf in the United States, cannot be part of his day-to-day existence. 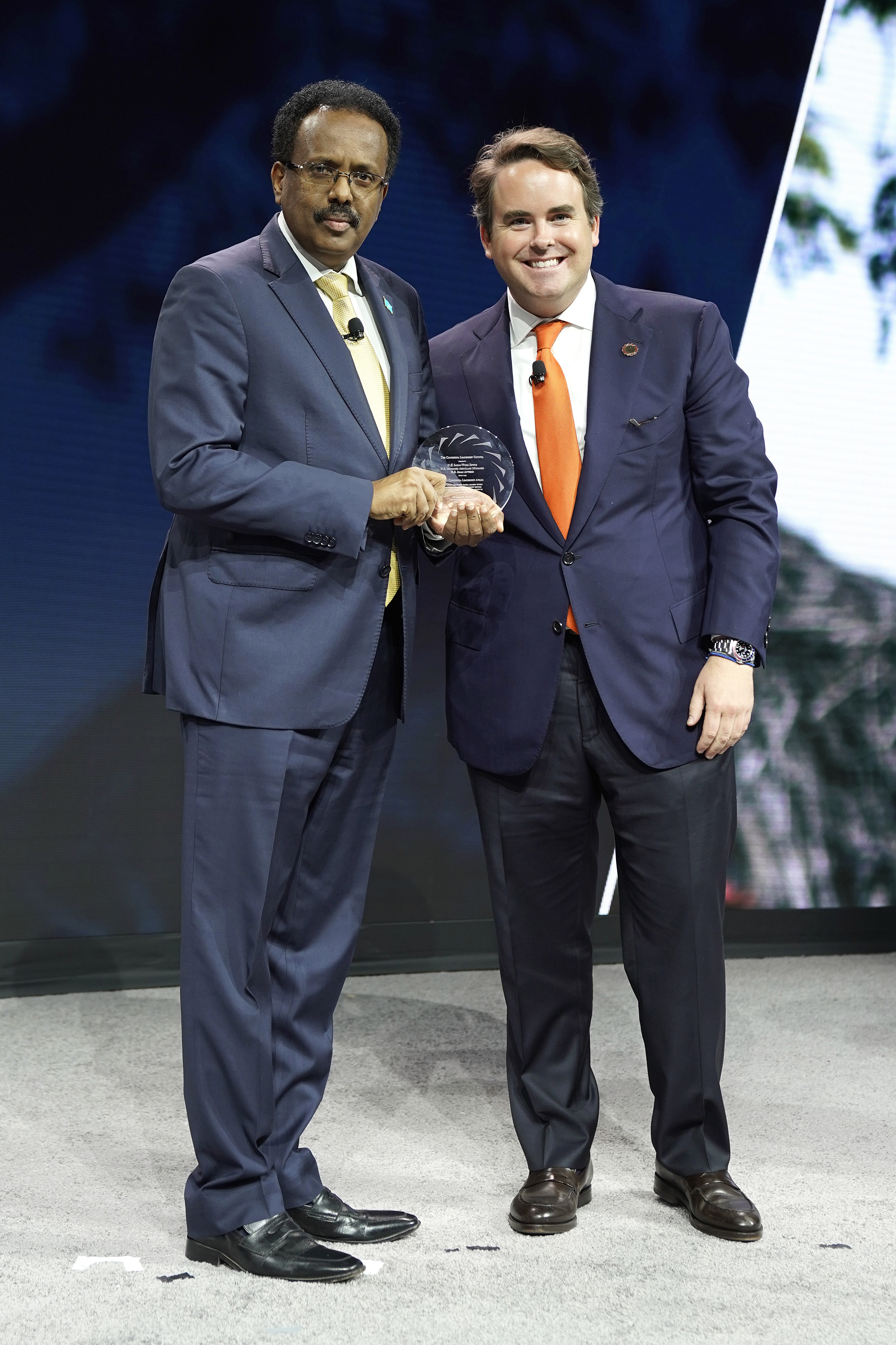 This visit to New York and the United Nations was Mohamed’s first time on American soil since taking the presidency. Leading Somalia is a job that requires him to be there. Somalia is considered one of the most dangerous and corrupt countries on the planet. It’s a home base for terrorists; Mohamed’s job as president pits him against al-Shabab, a jihadi fundamentalist group loyal to al-Qaida. Mohamed’s pledge throughout his presidency has been to fight the terrorists, root out corruption and make Somalia both safe and attractive to investors – especially American ones – who could build on the country’s rich natural resources.

The group packed into an elevator. Mohamed stood in the back. A duo of what seemed to be U.S. Secret Service agents stood in front, so they would be facing outward when the doors opened.

Mohamed smiled and tapped his chest. “You don’t know what’s going on inside,” he said, and laughed.

The president was still keeping it light; he wasn’t revealing what’s going on inside — yet.  That would come a few minutes later, during the question-and-answer portion of what is one of a few interviews he has granted to Western journalists since taking the presidency. Mohamed is as passionate in talking about his country as he is dispassionate in talking about himself.

In the elevator, Zagame asked, “So, how’s it going?” He really wanted to know. Mohamed’s job by definition puts his life in grave danger. Over the summer, al-Shabab killed his friend, Abdirahman Omar Osman, the mayor of the capital city of Mogadishu. They did it by planting a bomb on a blind woman whom Osman, out of kindness, had hired to work for him.

To most people and in most places, “How’s it going?” is a casual question. It is anything but that to the leader of Somalia. Mohamed would answer it moments later in his meeting room. He would answer it for the world the next day during a 25-minute speech on the floor on the U.N., in which he talked about Somalia’s “resilient” people, election reform, education effort, drought recovery, fight against poverty and “zero tolerance” for corruption.

But here in the elevator, he was still catching up with friends.

“You know, Caputo gave me the best burger,” Mohamed said. “The best.”

The president then asked Caputo if he remembered where in Buffalo they had that burger. Was it near Elmwood Avenue, or Delaware?

Mohamed smiled. “That was the best hamburger.”

The meal Mohamed recalled happened four years ago the diner Taki’s on Court Street in downtown Buffalo. “We were both involved in the Erie County Republican Committee and we would meet once in a while, just two guys talking politics,” Caputo explained in an email a couple of days later. “He was curious about local, state and national politics and I was fascinated by his stories of politics in his homeland.” 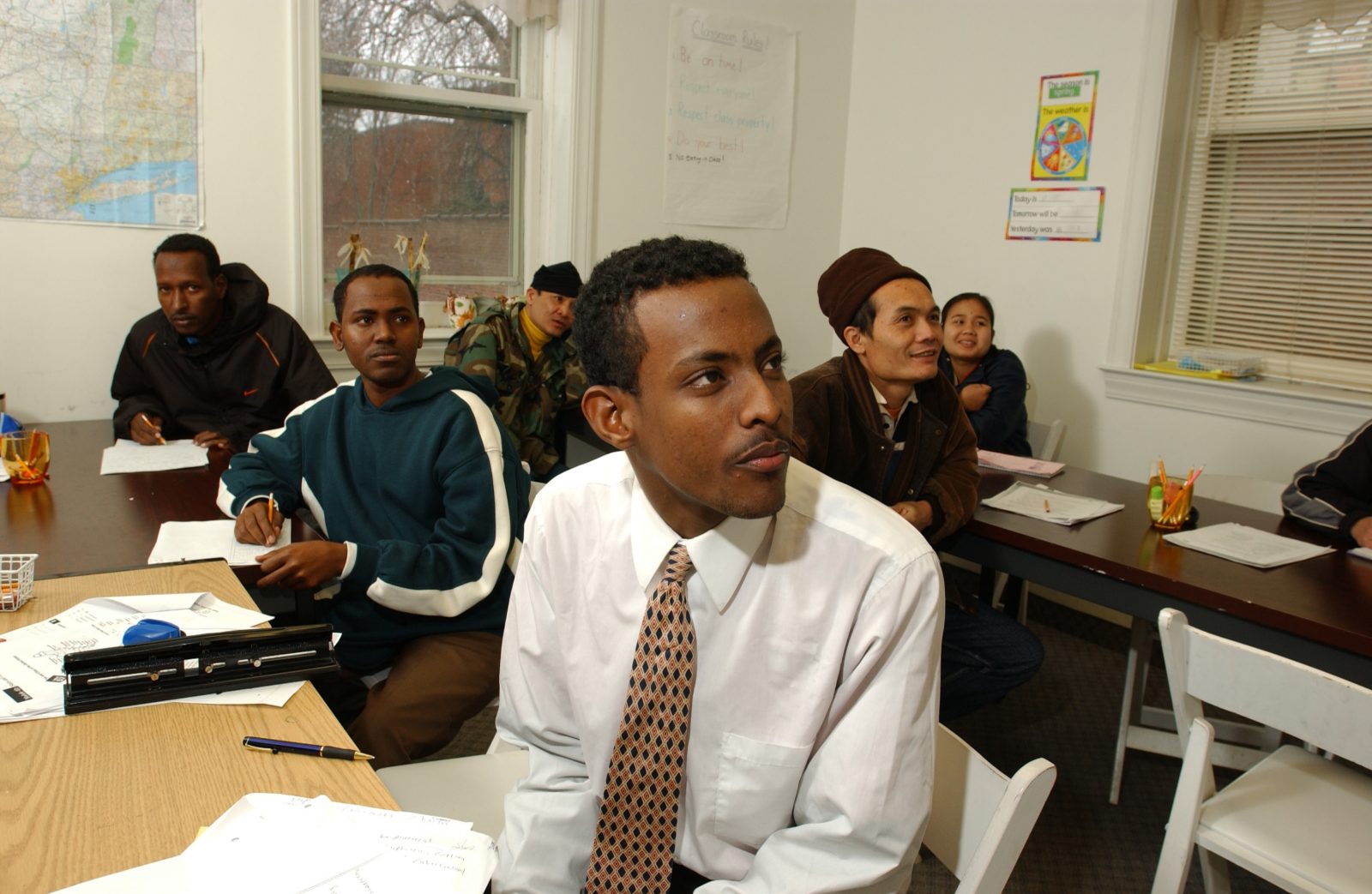 In 2006, Mohamed Mohamed, back left, was a student in an English as a second language class at the International Institute of Buffalo. (News file photo)

Even before he became president, Mohamed’s story was intriguing. He was born in 1962 in Mogadishu, and in the mid-1980s, went to work at the Somalian embassy in Washington, D.C. In 1988, with his home country in the grips of violence, he applied for political asylum so he could stay in the United States. Mohamed found his way to Buffalo, which had a large Somali population, and built a life: He started a family, earned two degrees from the University at Buffalo – a bachelor’s in history in 1993, and a master’s in history in 2009 – and became an American citizen. He became involved in Republican politics and worked on Giambra’s campaign for county executive in 1999. Giambra won, and Mohamed worked for him, and later for the state, in the areas of affirmative action and nondiscrimination.

Though Mohamed built what he remembers as a “comfortable life” in Western New York, his love for his home country never extinguished, nor did his will to return. His master’s thesis at UB was called “U.S. Strategic Interest in Somalia” and Mohamed had ideas for his country. In 2010, through mutual friends in high places, he arranged a meeting with then-Somali President Sharif Sheikh Ahmed at the U.N. Apparently impressed, Ahmed asked Mohamed to move back to Somalia and become his prime minister.

Mohamed accepted the offer, viewing it as an opportunity to make the changes he envisioned. As prime minister, he fought against terrorists and corruption, cutting down on the presence of both, while making sure soldiers were paid regularly and on time. In the United States, that’s a given. In Somalia, it’s an improvement that won Mohamed wide support.

But his tenure lasted only 10 months. The speaker of Somalia’s parliament, who sought to one day become president, wanted the well-loved prime minister out of his way. The speaker and Ahmed made a deal that would give Ahmed another year as president, but Ahmed had to fire Mohamed. He did, and Mohamed returned to his old life in Western New York — with every intention of going back to Somalia and running for president.

For Caputo, that meeting with Mohamed put him at the nexus of history.

“Somalia is a completely different ball game when it comes to public service and the path to elected office and he’s a fountain of information,” Caputo said. “That lunch was the first time we discussed Donald Trump’s campaign for the presidency. (Mohamed) talked of running for president himself, back home, and how complex that campaign would be.”

Mohamed aspired to go back home and make real, lasting change. He strategically built support both in Somalia and among the Somali diaspora in the United States, and in 2017 emerged from a field of 21 candidates to win the presidency. 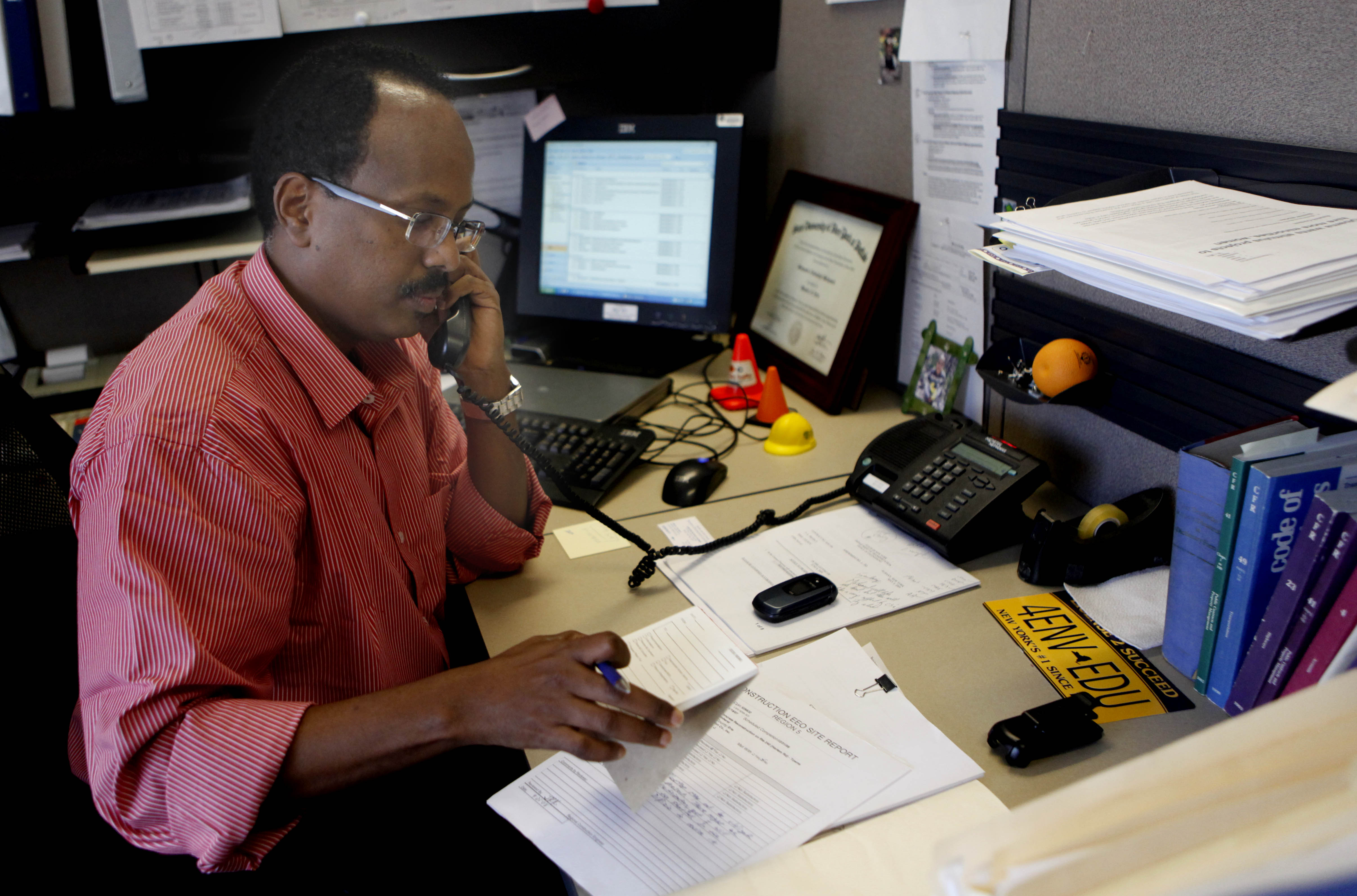 After serving as prime minister of Somalia for eight months, Mohamed Mohamed returned to Western New York in 2011 and his old job at the state Department of Transportation. (News file photo)

Inside a room where a tall Somalian flag was positioned behind him, and a small, desk-sized flag on the table to his left, Mohamed had about 15 minutes to talk about his journey and what he hopes will come next.

Giambra, who was in the room along with Caputo, Zagame and three of Mohamed’s senior advisers, brought up Mohamed’s long held belief that fighting terrorism in Somalia is vital to the United States’ own interests. Somalia has been a breeding ground for al-Shabab, which then targets other places, including Western countries.

“The head of the snake is over there,” Mohamed said, meaning Somalia. “We have to kill it, so then there will be no al-Shabab cells anywhere in the United States, Europe, Africa and everywhere else.”

This is Mohamed’s pitch to the United States: Help us root out and take out terrorists, and everyone will be safer. The U.S. has done this, including with a series of drone strikes that killed some al-Shabab leaders. “The U.S. now is a partner in fighting against terrorism,” Mohamed said. “We’re very appreciative and grateful.”

The president has his eye on the next Somali election, which is in 2021, and he wants to be able to show his people dramatic progress by then. He said that with American support, “within a year and a half, we can basically destroy, I would say, 90% of the al-Shabab capacity.”

By making his country safer, Mohamed also hopes to open it up to more investment from the United States. On this point, he becomes a passionate pitchman.

“Somalia is a wealthy nation in natural resources, but we happen to be a poor nation,” he said. “But it is a wealthy country in numerous minerals, gold — you name it. All kinds of different minerals. And it’s there, it’s proven.”

He continues: There is oil and gas offshore. There are beaches. Somalia has 8 million hectares of farmland, but it farming on less than 100,000 hectares. “We have the highest livestock per capita in Africa,” Mohamed said. “We have the longest coast in Africa which has tons of fishing opportunities.”

As passionate as Mohamed is about the possibilities for partnership between his home country and his adopted one, he has embraced his future in Somalia, whatever that may be. He recently gave up his U.S. citizenship, presumably a sign to Somalis that he is fully committing himself to the country. There are no guarantees what that may mean: As leader, he can make dramatic change. But he is also a terrorist target and, as his friend Giambra said, “his life is in such jeopardy.”

Mohamed doesn’t hide from that. Before heading to his diplomatic meeting, he acknowledged that in brief moments where his is thinking only of himself – not of the 15 million-plus people he leads – he reflects back on his old life.

“It is worth it to be in Somalia, but sometimes when I become overwhelmed, then I remember the easy life, comfortable life, with the family, nice neighborhood,” he said. “Yes, it always comes to my mind, and that’s only when I think (of) myself. But when I see millions of people who are suffering, then I say, ‘It’s worth it.’ It’s worth it to contribute, to make history, to leave a legacy.”