I took a walk to the Skyway the other day with Rep. Brian Higgins, D-Buffalo. For years, he has embodied civic efforts to have the road removed. He speaks from the gut and he builds a passionate case. He said he has no nostalgia, no sense of wonder, associated with the Skyway.

That's where we differ. I do.

I remember being a kid, coming from the south, when the journey was an exercise in awe. I remember riding through Lackawanna and its this-is-Mordor landscape, through the torches, smoke and fumes that caused you to roll up your windows on summer days and left you wondering how the people in the houses along Route 5 somehow managed to hang their clothes out to dry.

Before long, we always came to the Skyway. I recall as vividly as I am sitting here both the awe and touch of fear as the car rose above the grain elevators and old mills. At the peak you saw that sheet of glittering blue water, Lake Erie rolling to the west, and then you neared downtown and the great landmarks of Buffalo – the Aud, the twin Statues of Liberty, the ornate City Hall.

Yes, I have some fondness for the Skyway.

[RELATED: In Interstate 81 decision, signals on the Skyway's future?]

To my friends who say it is one more road that devoured a landscape, I can only say: I understand, with a twist. The Skyway, while built in an industrial district, is a product of the same era when interstates and expressways traumatized communities, when the Kensington tore through the gut of Buffalo and the Scajaquada bisected a precious Frederick Law Olmsted-designed park, when similar projects did similar mayhem in Syracuse and Rochester – and when highways built with zero planning or foresight left wounds that to this day are difficult to heal.

This was the era dominated by Robert Moses, the guy whose automobile-first philosophy rippled out from New York City and rolled across the state, until – in a particularly egregious symbol of power over reason – we at one time had a parkway named for Moses that ran not far from the brink of the American falls themselves, again carving through a jewel deeply influenced by Olmsted.

So when I speak of the Skyway, take it in this spirit: As I came of age, it offered the loftiest view of the large city at the center of my world. Higgins would say – does say – that such sentiment can get in the way of something better, that removing the bridge would mean a waterfront brought back to greater power, a downtown impact he describes as almost unimaginable until it happens.

My reservations may be answered soon enough. But I know there are an awful lot of Western New Yorkers who have similar thoughts about the Skyway, a touch of lingering awe and caution expressed by people who love the city and are hardly enemies of wise planning. The moment we are at right now is finally a chance to address that wistfulness, one way or another, with real answers.

Last week, Gov. Andrew Cuomo came to Buffalo and picked a project called “City of Lights” as the winner in an “Aim for the Sky” design contest. The idea was giving brilliant designers a chance to dream out loud about the Skyway, and this particular vision involved a towering piece of the bridge as a kind of monumental park, with a rounded tower to take people up and down.

The notion ignited a ferocious digital reaction, touched off by a pragmatic Buffalo sensibility. Proponents of leveling the Skyway have said for years that the bridge is a structural and financial burden to maintain, so the goal of keeping part of it as a vast monument, to skeptical observers, seemed to invite the same problems we have now.

The combination of the announcement with the governor’s own words – he asked rhetorically if “the Skyway is coming down,” then answered his question in the affirmative – made people wonder if the tower idea, in some way, was actually lined up to occur.

It is not. Even Higgins said those plans were just a vision, a kind of dream, as we move toward the real choice.

Instead, in a piece of news with far more practical meaning, the governor promised $10 million to speed up a federally required environmental impact statement that might begin before the winter ends. It matters for this reason: Until that statement gets rolling, there is a lot of talk but no true, thoroughly researched proposals on the ramifications, in 2019, of replacing the Skyway.

Right now, the process is so young that state transportation planners are still developing a mandatory “statement of purpose and need” to explain why they are looking at bringing down the bridge, to begin with. 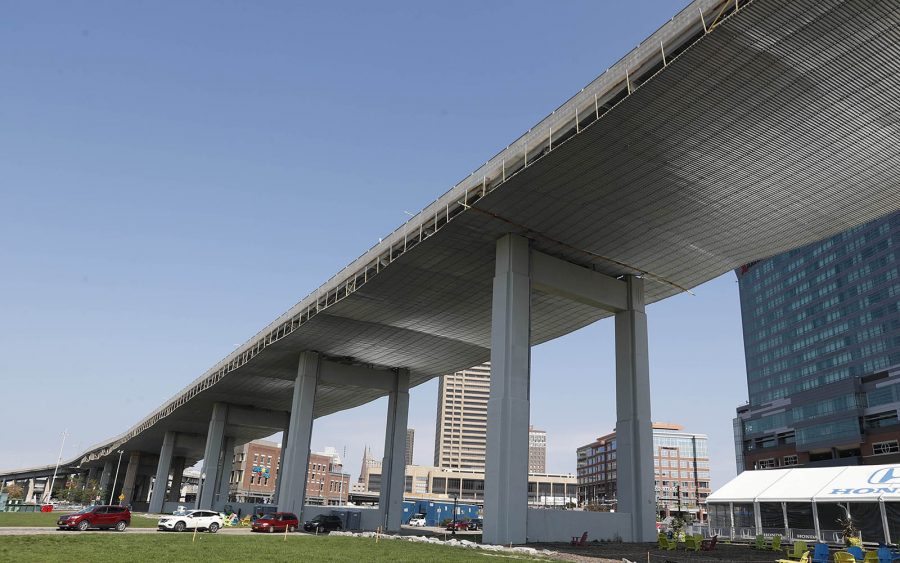 Rep. Brian Higgins has called for years for bringing down the Skyway. (Sharon Cantillon/Buffalo News)

Once it all gets underway, a consultant will essentially begin with the existing Skyway as one option, and then come up with potential alternatives. To Higgins, the best answer is one of the simplest:

You bring down the Skyway, primarily using federal dollars, and you greatly expand Tifft Street to pick up many Southtowns commuters, while undertaking a comprehensive look at the entire metropolitan street system to try and “reactivate” many major thoroughfares – think Broadway, William or South Park – that lost traffic and vitality when the expressways were built.

Yet even that thought is jumping far ahead. The most important piece of the impact statement is a mandate for the consultant to listen to the community. Higgins said he looks forward to finally allowing a multitude of Western New Yorkers with powerful feelings on the Skyway to ask questions and add their thoughts about whether it ought to stay or go.

He is passionate about bringing it down, and he believes the impact statement, in the end, will clearly prove his point. As for me, as both citizen and journalist, I think maybe I am typical. I intend to pay close attention throughout this process to learn of potential impacts on both the landscape and on traffic, because it is difficult to wage arguments of detailed substance about a project whose ramifications have yet to be spelled out.

Instinct says this bridge is near its end. A day will come when all the options go on the table, and if demolition truly makes the overwhelming sense its backers promise, then I will embrace it. You try and support the wisest choices for communities you love, even if in this case the price might be the genesis of that connection.

I loved Buffalo in the moment I first saw it, from the Skyway.