Johanna C. Dominguez doesn’t just provide a home for her four cats. She also gives them a safe and special place of their own outdoors.

Sirius, Weasley, Tovenaar and Merlin can enter the screened-in, multilevel structure through a cat door installed in her house.

The enclosed structure measures about 13-by-4 feet and stands 9 feet tall. It was built by a carpenter friend – and it’s a purrfect solution (sorry, had to say it) for letting the felines safely enjoy some fresh air.

The catio keeps backyard birds safe from the cats – and the cats safe from cars and other potential dangers (although the cats are sometimes allowed in the enclosed backyard under her close supervision.)

When visitors walk into the garden, the friendly felines appear in the catio structure to greet them and grab treats through the heavy duty mesh enclosure.

The cats are used to people traffic. Dominguez’s garden has been on Garden Walk Buffalo for two years now, and the catio is a big hit.

But there’s much more to this city garden that Dominguez has created since buying the house in Buffalo's Allentown neighborhood three years ago.

She calls it Valinor, named for the fictional location in J. R. R. Tolkien’s mythology. 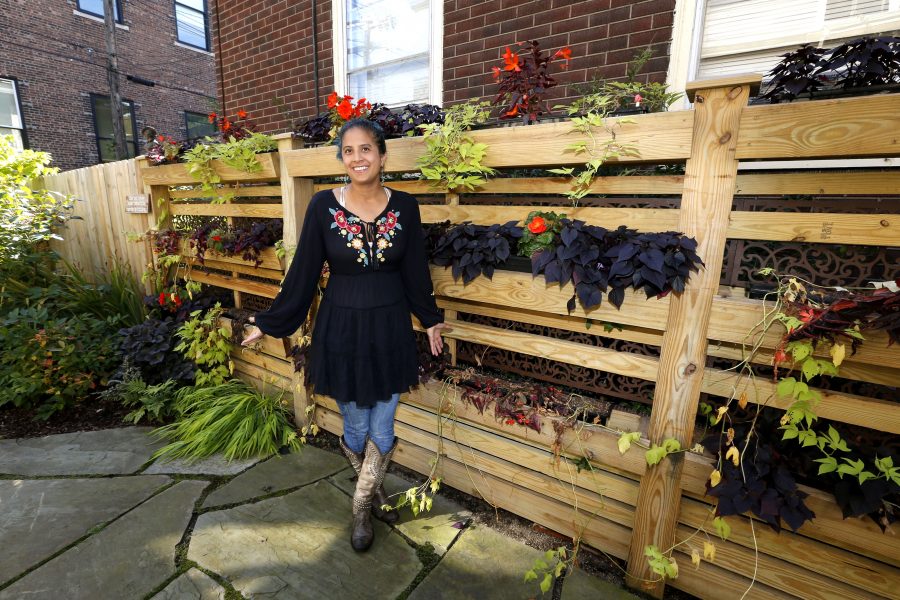 The living fence is a big attraction. (Robert Kirkham/Buffalo News)

• The “green” or “living” fence inside the garden gate is the biggest attraction of the garden, she said.

It's 24-feet wide with removable planters filled with begonias and sweet potato vines.

“I like to choose opposite colors so that’s why it’s alternating purple and green and then the orange is a little bit of pop,” said Dominguez, who first came to Buffalo in 2000 to attend Canisius College, where she majored in English and philosophy.

After earning a master of fine arts degree in poetry from Sarah Lawrence College and living and working elsewhere, she returned to Buffalo in 2016.

• Her front garden attracts pollinators. “I keep the front mostly native and pollinator friendly,” said Dominguez, a nature and wildlife photographer who works in social media.

Dominguez raises Monarch and Swallowtail butterflies in protective tents on the back patio. On the day The Buffalo News visited this week, two monarchs were ready to be released.

• A side garden features mostly flowering perennials. “I filled it in with annuals this year,” said Dominguez, who also works at Urban Roots Cooperative Garden Market on Buffalo’s West Side.

• Another garden is planted with heirloom tomatoes, artichokes, kale and other edibles. Her berry garden – complete with a "Berry Patch" sign – includes four different kinds of blueberries, raspberries, blackberries, strawberries and elderberries.

• The koi pond and custom-made water feature made from salvaged pieces are surrounded by mostly native plants. This area leads to a back garden with fruit trees pruned against the fence in the espalier style.

• The back room of the house was in disrepair when she moved in. “I tore this down. It was a structure that was caving in – literally the ceiling, the floor, the walls were caving in,” she said.

Dominguez said she has always wanted a straw bale house, so when she rebuilt this structure, she opted for a straw bale, eco-construction.

The room is now her office.

The potted houseplants come in from the patio for the winter, but Dominguez is already making plans for next year's gardening season.

And the cats will be watching it all from the catio.

* In case you missed this story on another favorite outdoor space: