In the movie “Blade Runner,” a bounty hunter chases killer androids through narrow alleys lined by noodle soup counters and lantern-lit brickwork. The movie is set in 2019, which seems exactly right when you walk into Misuta Chow’s today.

The restaurant and the movie both rooted their look in the Shinjuku district of Tokyo, where crowds fill narrow passageways behind the backs of diners and drinkers lining establishments on either side.

The two-story bar and restaurant is the brainchild of Johny Chow, a South Buffalo-born musician whose bands have toured the world. Those Tokyo alleys stuck, and when Chow was ready to set up his own place, working with life partner Christi Allen, they made it happen across the trolley tracks from the Hyatt Regency Buffalo.

With movie-set attention to detail, the restaurant’s first floor echoes the alley milieu surroundings down to mossy shingles and rust trickling past a wall-mounted air conditioner. The second floor is dedicated to pinball machines and video game cabinets of Chow’s youth, spent in Hertel Avenue bars. 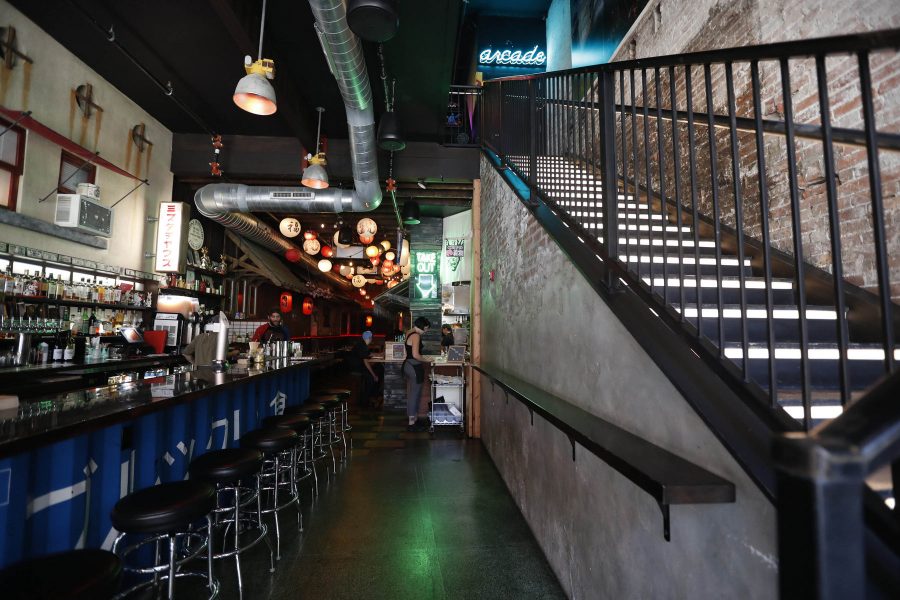 Japanese street food is the restaurant’s specialty. Customers looking for the most Tokyo-ish experience can hunker down on a stool facing into the open kitchen, and order a bowl of ramen “for the slurping.” That’s proper noodle eating etiquette in Japan, or so I am told, because it cools scalding pasta. It’s also the menu heading for noodle soups.

Udon ($12) offered pencil-thick wheat noodles and a bonanza of mushrooms and bok choy, plus roasted pork and another egg. Its broth was translucent brown with undercurrents of sea, from bonito or another marine influence. There was no need to slurp these noodles, which arrived lukewarm. 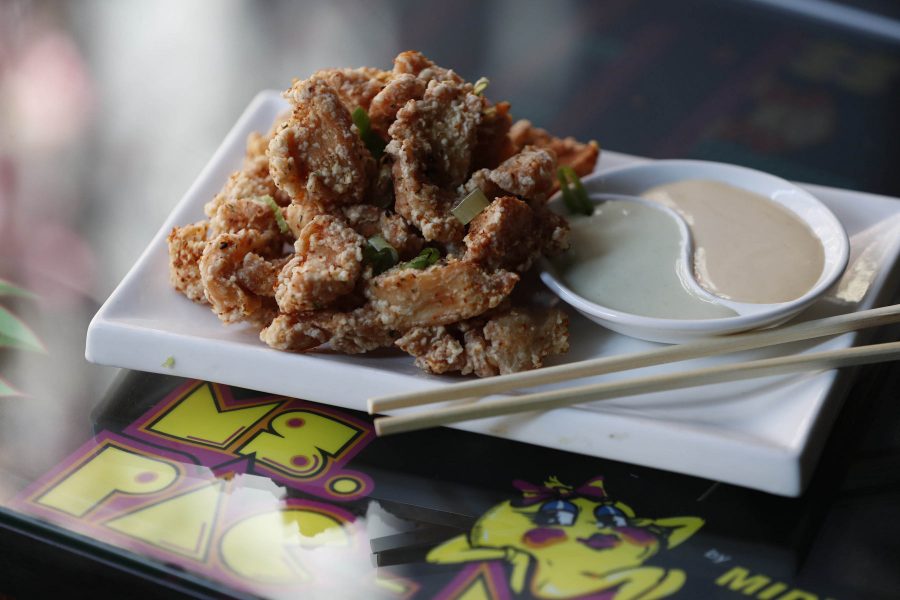 Chicken yakitori ($2) was my skewer of choice, marinated dark-meat chicken grilled to a lush firmness with scallion, and gently brushed with Japanese barbecue sauce. I ordered a second. 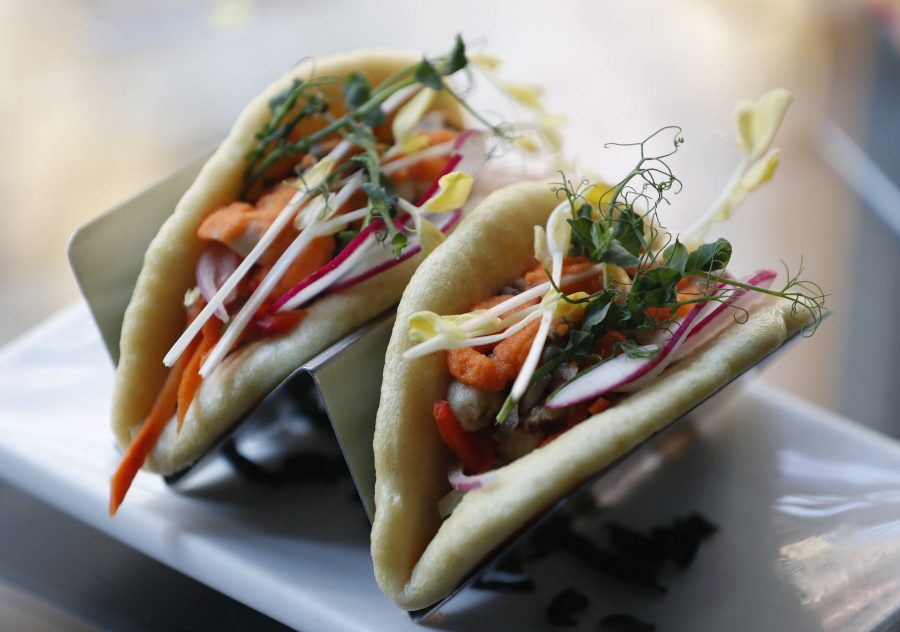 Shishito peppers ($5) were undercooked, crisp instead of yielding. Tsukudani ($7) were solid bites of roasted oyster mushrooms on wonton crisps with seaweed, chile flakes and sesame seeds. Age onigiri ($6) were fried rice balls, chewy briquettes I would skip in favor of baku onigiri ($11), essentially a Nipponese arancine.

The orange-sized fried rice ball is presented in yakisoba sauce, a Japanese elixir that’s like barbecue sauce. Except that with Worcestershire sauce, mirin, soy sauce, oyster sauce, it’s got more levels than a mall parking garage. Inside the rice shell is chopped pork, carrot, and mushrooms flavored with five-spice powder, a succulent treat at the heart of the crumbed-and-fried sphere. 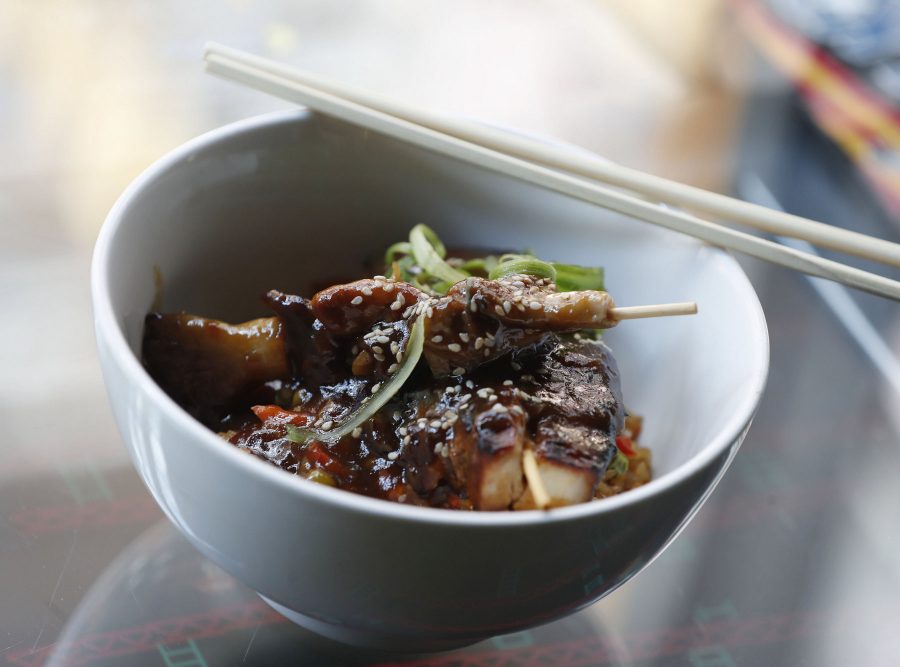 I’m a sucker for octopus, but the tentacle sandwich ($15) was sold out. So I shifted to the katsu onigirazu ($12), happily discovering a sort of cutlet sandwich, of pork or chicken.

Mayonnaise-rich Napa cabbage slaw was an upgrade from lettuce, and sticky sushi rice, held in place by a sheet of forest-green seaweed paper, replaced bread. What fun – a Nipponese crunchwrap packed with savory tang, bites punctuated with house-pickled carrots and red onions.

Chicken was the common denominator in my favorite Misuta chow. Karaage chicken ($8) was the most delightful chicken nuggets I’ve had in ages, dark meat marinated, rolled in robustly spiced flour and fried to a crunch. Cucumber tofu ranch and a sweetened chile mayonnaise, offered for dipping duty, were superfluous. 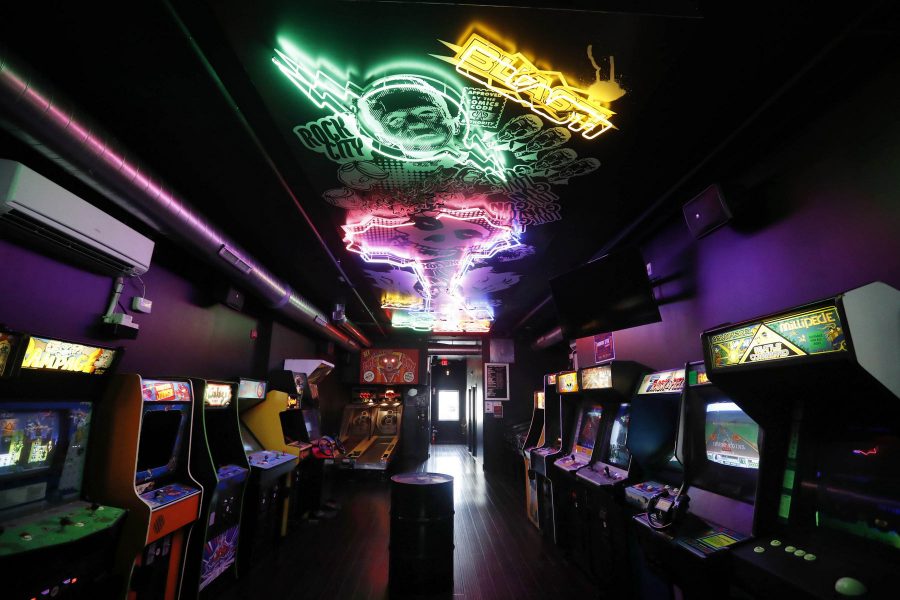 The biggest chicken wing I’ve ever eaten lumbered into view, briefly blotting out the sun. This Paul Bunyan of poultry was deboned and stuffed with ground pork, carrots, and rice noodles, in the style of a Chinese phoenix wing.

Served in slices, with chili hoisin sauce for dipping, the bakudan wing ($12) was a prince among bar snacks. 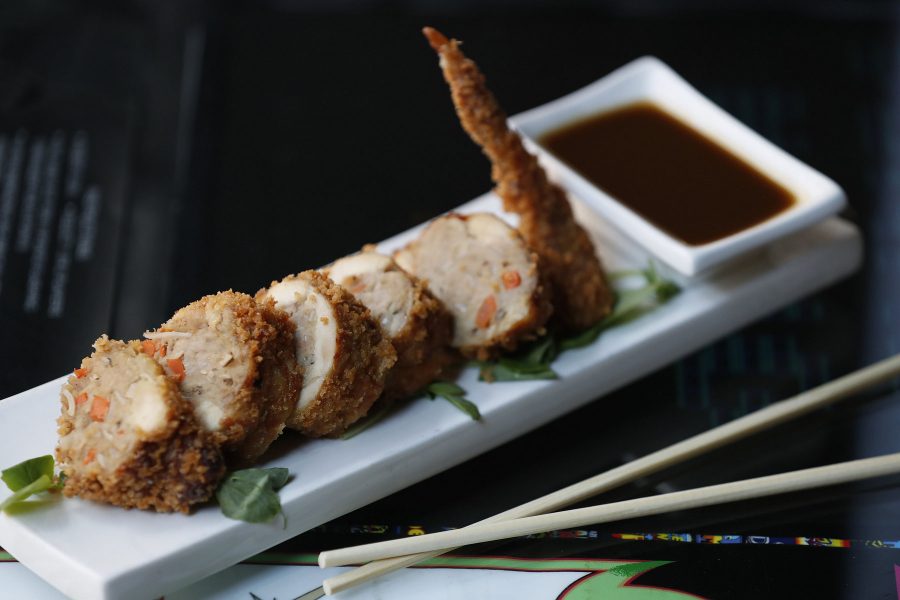 Drinks have a Japanese bent, with extensive sake offerings and one on tap from Brooklyn. There’s Japanese whiskey, including a specialized Suntory highball tower, in addition to a full bar and beer selections.

Misuta Chow’s stock of retro eye candy includes a working pay phone and a mural of a skyline-stomping robot titled in Japanese. In the rear of the space, a sparkly pink staircase provides an Instagram-worthy selfie frame, and provides access to the second floor. 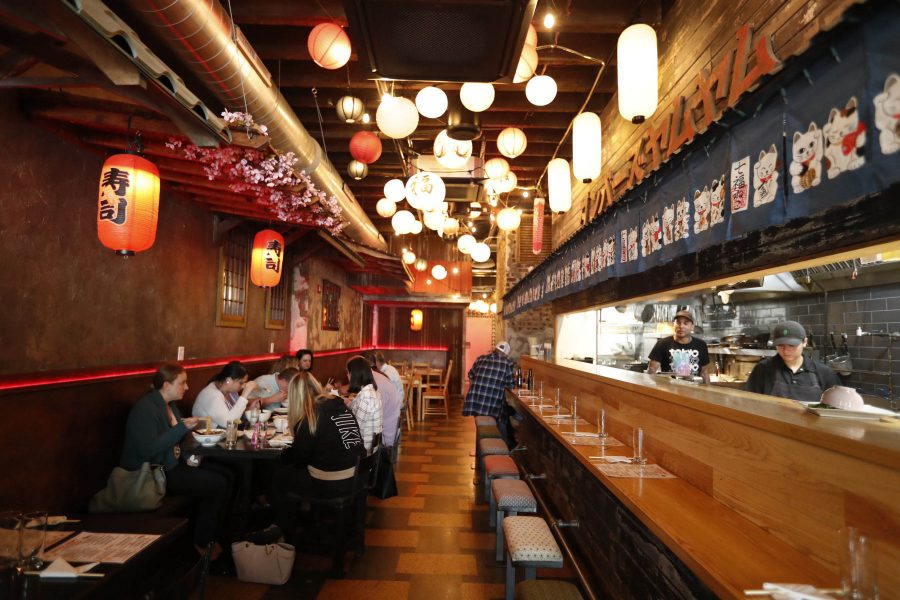 Notably, Misuta Chow is the only Buffalo restaurant I have seen with more Yelp photos of interior scenery than food. All due compliments to the decorators, certainly, but some of the cuisine could use more of that attention to detail.

While I didn’t groove to every number at Misuta Chow’s, the best hits are worth putting on repeat.

Gluten-free options: karaage chicken and many other choices. 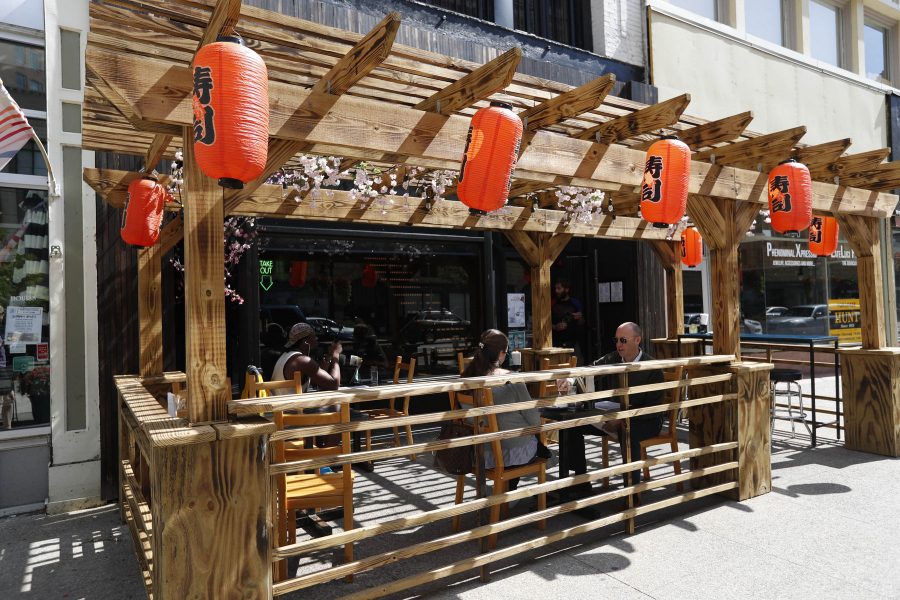 The Main Street side of Misuta Chow's has an arbor decorated with artificial cherry blossoms. (Sharon Cantillon/Buffalo News)