I guess if you’re going to take a cult classic, a movie beloved the world over, and pull it apart at the seams, stuff it with padding, and sell it back to us – well, this is how you do it.

“Mean Girls” is as perfect of a comedy as contemporary hits come. Though the Tina Fey-penned movie that helped make Lindsay Lohan a global superstar is now 15 years old and frankly, showing its age. I doubt Regina George’s cool mom, brought to hilarious life by Amy Poehler, would be filming her daughter’s school talent show with a camcorder today. There’s room to take in some of those seams. Fluff it up a little, add a pink bow.

The national touring company of the hit Broadway musical, as you might have noticed, launched in Buffalo this week. It continues its run in Shea's Buffalo Theatre through Sept. 27. Fey has been spotted around town at local diners and salons, making all of Buffalo feel a little cooler than we did last week. The Tina Fey is actually sitting at our lunch table. I can’t remember the last time a librettist splashed waves on local social media. So fetch.

But let’s put down the cheese fries for just a second and be like mean queen Regina George and her supreme squad, the Plastics, at their moral turning point – let’s be transparent and honest.

This is a good musical. It’s fun. It’s flashy. You’ll probably have a fun time. But it’s not a great musical, not in the academic sense. It won’t win a Mathletes tournament, like new girl Cady Heron – spoiler – does. It’s super fast, loud and at times difficult to keep up with. Some of that is the fault of Jeff Richmond and Nell Benjamin’s score, which is like a blender of singing, screaming, texting teens. Puke emoji.

But this being Shea’s, there are sound issues, too. I couldn’t decipher many of the lyrics in the first act because of the audio mix, though this improved as the night hurled on. Think of a Magic Eye puzzle (that’s a reference older than 15 years; sorry, kids): If you squint your ears just enough it all blends together into something you can muster.

If the spastic energy and pink sheen of the show is familiar, you might remember “Legally Blonde: The Musical,” which existed on the same high-speed treadmill “Mean Girls” runs on. (Benjamin wrote that show’s lyrics, too, on an elliptical.) 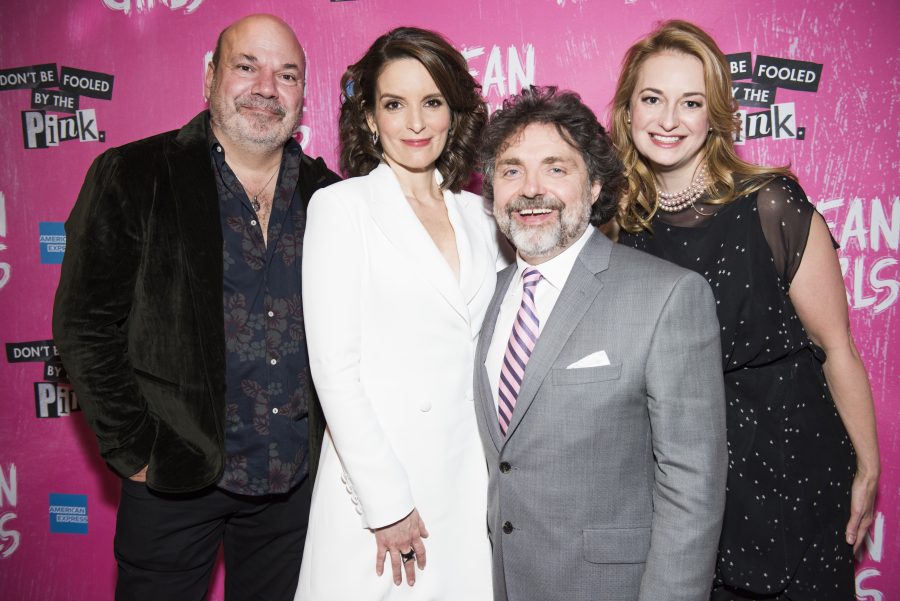 Casey Nicholaw’s direction and choreography explode every few minutes, with cheer-team uniformity and a bottomless pit of power. (Where’s Mrs. George’s camcorder when you need it? These are some moves.) Finn Ross and Adam Young’s dreamy video designs fill Scott Pask’s set with spunk and humor, like a living, breathing yearbook brought to life on the walls.

Bringing all the life into this barrage is a wonderfully skilled cast, many of whom have the impossible task of trying to live up to serious expectations of the film’s fans.

The good news is that the show has its own identity that could never be mistaken for the film. Fey’s dry wit is probably better suited for an intimate two-shot and not an arenalike live show. But the tour’s cast does a serviceable job of trying to make it their own.

Gold stars go to Danielle Wade, who puts in a much more endearing performance as good-girl-gone-bad Cady than Lohan could; Jonalyn Saxer who as the specifically dumb blonde Karen Smith, made me laugh more than anyone or any line in the whole show; Adante Carter as the gorgeous and kindhearted heartthrob Aaron Samuels; and Gaelen Gilliland, who breathlessly plays all of the adult women parts, including Regina’s mom, Cady’s mom and Mrs. Norbury, Cady’s down-to-earth math teacher – that is to say, all three of the roles “SNL” alum Tina Fey, Ana Gasteyer and Amy Poehler played in the film. Nice work.

This hard-working ensemble pulls off a big task and does it well. As far as musicals go, it’s no Tony winner (it won none of its 12 nominations, in fact). I don’t remember a single tune or lyric. But it does expand on the film’s message of girl power, teen empowerment and self-identity with warmth and responsibility (and a few lazy political jokes). Throw in a curse slang here or there, a few jokes about genitalia and sex and, you know, murder, and you’ve got a hit.