“It’s crazy,” Paul Harris laments in the opening montage of "The Falls" documentary, his voice narrating a cinematic aerial image of the Cataract City, “that you’ve got one of the biggest attractions in the world, and the city can still be so poor.”

The short film premiering at 8 p.m. Friday on ESPNU explores the good, bad and ugly aspects of Harris’ upbringing on the unforgiving east side of Niagara Falls, his place in the city’s basketball lore, and a new breed of ballplayers who are furthering the Falls’ legacy – rising stars Jalen Bradberry, Roddy Gayle Jr. and Willie Lightfoot.

“I’m really grateful I was able to speak my truth and talk with the boys,” Harris said in a phone interview from his home in Connecticut.

“It’s amazing just to have our story told on such a large platform to be advertised across the world,” Gayle Jr. said in a text message.

“We were able to see the grit in all four of the players, the edge that everyone we talked to told us is a Niagara Falls thing,” director Lukas Korver said. “It’s just something in the water there, a product of the circumstances and the environment.” 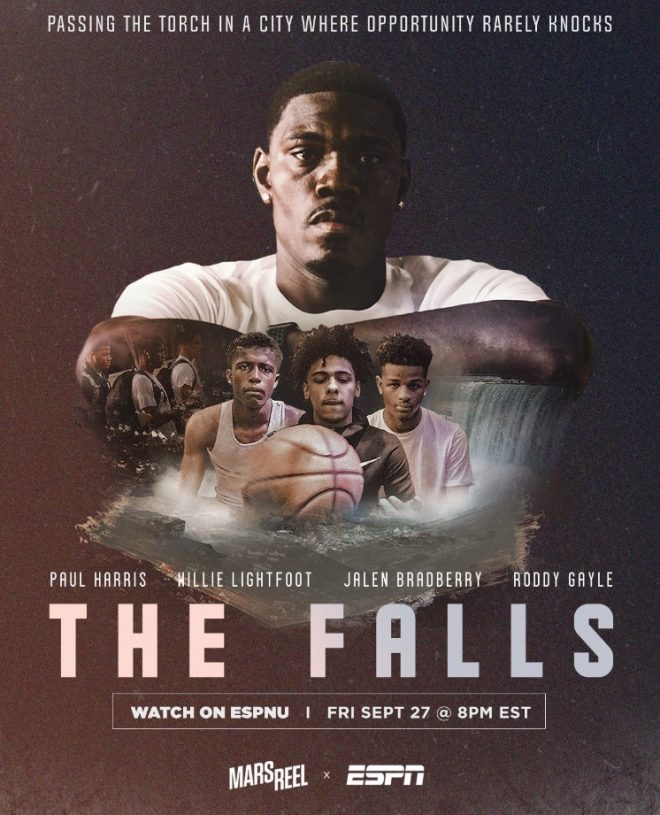 Harris speaks candidly in the documentary about his struggle to escape the poverty and crime in his neighborhood, his arrest at age 16 on charges of intent to sell crack cocaine, and how finding an escape on the basketball courts at the Niagara Falls Family YMCA and other community centers “definitely saved my life,” he said.

Leading a loaded squad with seven Division I prospects, including future NBA player Jonny Flynn and Super Bowl champion running back James Starks, the man among boys they called “Do-it-all Paul” was the driving force behind the Niagara Falls Wolverines winning a New York State Federation championship in 2005 and ending the season ranked No. 1 in two national polls.

One of the top-rated recruits in his class, Harris spent three seasons at Syracuse, teaming with Flynn again in the latter two. While Flynn went No. 6 overall in the 2009 NBA draft, Harris was not selected and his NBA prospects that once seemed like a slam dunk slipped away when he injured an ankle during the Utah Jazz training camp.

“I was broken and I asked God to help me,” Harris said in the documentary. “I didn’t want to get stuck here.”

Harris went on to play professionally in the Philippines, Italy, Turkey, France and China. At 32, he still has overseas opportunities.

While playing for a club in Le Portal, France, last March, Harris stayed up until 4:30 a.m. watching a live stream of Lightfoot lifting Niagara Falls to a comeback victory in the Section VI championship game at Buffalo State.

“It was a special moment to watch,” Harris said. “I was really impressed. I could tell Willie had that ‘it’ factor.” 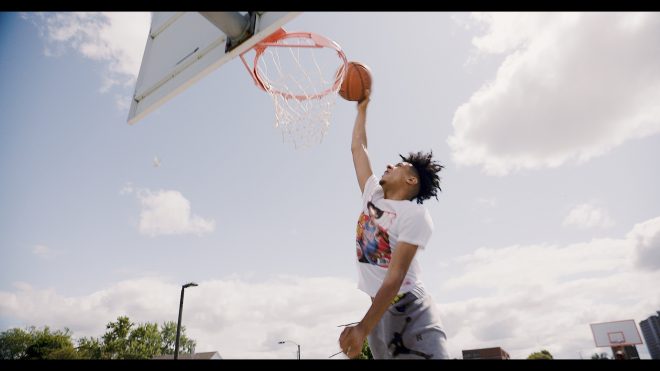 Jalen Bradberry dunking at an outdoor court as seen in the documentary.

That special quality possessed by Lightfoot, Gayle Jr. and Bradberry has led to each player receiving multiple Division I scholarship offers as underclassmen and caught the attention of Mars Reel, an outlet whose video content attracts 30 million monthly viewers on YouTube and social media channels.

“It feels great to get compared to guys like Jonny and Paul and for us to be recognized nationally,” Bradberry said in a text message. “We’ve all been waiting to get some recognition and now that it’s nationally it’s really a great opportunity.”

"The Falls" will be the first Mars Reel production to air on ESPNU, Korver said.

“We wanted to show how this magical team in 2005 kind of galvanized the city and the parents of this next generation of kids,” said Korver, a Syracuse University graduate. “They were inspired by the ’05 dream team and had the potential for another dream team.”

The documentary touches on how that dream dissipated. Unlike the players in the preceding era, the talented trio that regularly trained together, were teammates in Biddy Basketball leagues, on AAU squads and for one tantalizing season at Niagara Catholic middle school have all departed the Falls.

Gayle Jr. was Niagara Falls’ leading scorer as an eighth-grader before he transferred to Lew-Port and made the All-Western New York team as a freshman. Bradberry came over last season after the closing of Niagara Catholic and led the Wolverines in scoring while earning second-team All-WNY recognition as a sophomore. Bradberry has since transferred to the Park School after a coaching change at Niagara Falls. Lightfoot, who joined Gayle Jr. as the first freshmen selected to the All-WNY team, has left Niagara Falls to attend Sunrise Christian Academy, a nationally ranked prep school in Wichita, Kan.

“It feels great to be a part of the Niagara Falls basketball legacy,” Bradberry said in a text message. “Even though we are breaking up in going to different schools we never forget where we come from.”

“They were supposed to be the next group,” Harris said. “I told them people will always wonder what that group could’ve been. But that wasn’t their destiny. They went their own separate paths and can’t be looking back now.”

Carlos Bradberry and Roddy Gayle Sr. starred on state championship teams in the 1990s for LaSalle, the storied city school that closed in 2000. They hoped to see their sons win titles together at Niagara Falls, but have found the impoverished city presented too many potholes to continue on that path.

“I feel like we have to get our kids out of here,” Gayle Sr. said in the documentary. “I love Niagara Falls. I just think Niagara Falls has done these kids, the youth, a disservice.” 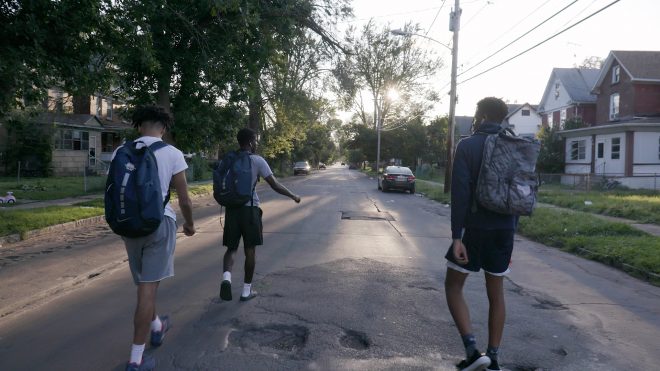 Jalen Bradberry, Roddy Gayle and Willie Lightfoot walk together in Niagara Falls in a scene from the documentary.

Korver was impressed with how the Bradberry and Gayle families have shielded their sons from the perils of growing up in Niagara Falls.

Lightfoot has not benefited from the same parental influences. He is being raised by his grandmother due to his mother’s disability and his father being paralyzed by gun violence. Lightfoot’s determination to use his basketball ability to make a better life for himself and provide better medical care for his parents is one of the documentary’s themes.

“I see parallels between Willie’s and my story,” Harris said. “Being from the east side of Niagara Falls, the rougher side, basically from the same streets. Having to survive certain situations on our own.”

Harris hopes to use his experiences to mentor Lightfoot. He spent one year at Notre Dame Prep in Massachusetts before going to Syracuse.

“I know what that prep school life is like,” Harris said. “No matter how tough you are, you are still going to have days when you get lonely and miss everybody. I’m going to stay in contact and just check up on him to let him know the reasons he went down there and to stick it out.”

While optimistic about how things will work out for his documentary co-stars, Harris was saddened to see so many of the community centers where he honed his game have closed and is worried about the lack of opportunities for young people in Niagara Falls.

“We drove around to four or five parks and community centers that have been closed and abandoned,” Harris said. “Parents are moving their kids to places where there are better opportunities and after-school programs in place. If we don’t have those programs, kids wander off and start doing things they shouldn’t do, like selling drugs.”

A nationally televised documentary shedding light on Niagara Falls' flaws could be a catalyst for change, Harris said.

“We showed what is missing and lacking and how it’s hurting the kids,” Korver said. “I wish we had more time to talk about the good of Niagara Falls. We saw how close-knit this city is, how much the city rallied around these kids and how much support they have.

“The parents want to see something better for their kids. Even though they will tell you this place is bad and we need to get away from the distractions, in the same breath they still have love for Niagara Falls.”