Rick Wegryn read on Facebook about the ceremony for Casimer Mazurek. Wegryn, a retiree from Bethlehem Steel, put in almost 30 years in the steel plant. Sometimes, in the first seconds after sleep, he will come out of a dream and believe he is still there, walking from the lunchroom to go back to the floor.

He said that once you have done the work, once you have seen the sparks from molten steel or spent time with a coke oven, you understand. You sense your place in a generational fraternity.

So Wegryn felt an immediate kinship when he learned of what happened to Mazurek, a Polish immigrant who was standing with thousands of others outside the old Lackawanna Steel plant, a century ago this week, when company guards opened fire on a crowd of men, women and children.

This was during the "Great Steel Strike" of 1919. Conditions such as 12-hour shifts, seven-day weeks and miserable pay led to a walkoff nationally by steelworkers. According to newspaper accounts of the time, the guards in Lackawanna were angry because one of the strikers among the throng had thrown bricks in their direction, near what was called the "three gate."

Mazurek, 26, not long home from World War I, was shot to death when the guards turned their weapons on the crowd. Another striker, Maciecz Buczkowski, died shortly afterward. A 3-year-old boy was shot through the groin, but survived.

Yet the tale was too often forgotten until Monday, when Chris Hawley – founder of the Eugene V. Debs Local Initiative, which illuminates Western New York labor history – organized a tribute at Holy Cross Cemetery, where 100 years ago this week a crowd estimated at 7,000 to 10,000 accompanied Mazurek's casket to burial. 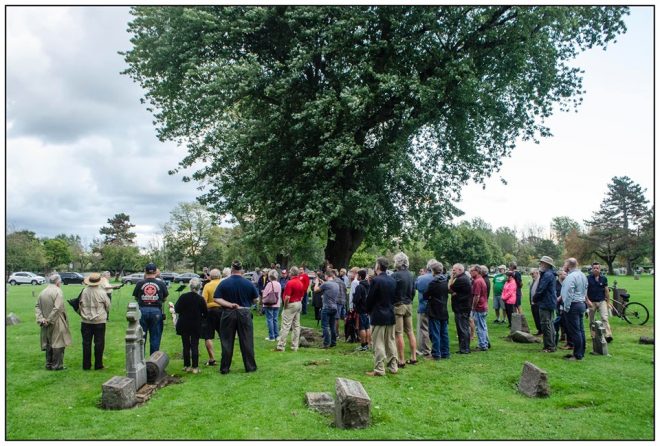 "I read about it, and I thought, 'This is in my backyard,' " Wegryn said of Monday's gathering. "He was a steelworker and a union man and I'm Polish like he was, and I saw it and thought, 'I've got to go.' "

The afternoon was rainy, clouds heavy overhead, and Wegryn wondered if the event would be canceled – and if not, if anyone would even show up. He was startled to see maybe 70 people standing in the wet grass. There were many representatives of labor, including some members of the United Auto Workers, now on strike against General Motors.

Someone tapped Wegryn from behind. He turned to greet another retiree from the steel plant, a friend Wegryn hadn't seen in a while, one of several familiar faces from Bethlehem who showed up for all the same reasons.

The rain stopped as a hole in the gloom opened above Lackawanna, and Wegryn – almost with a chill – had the same feeling as a lot of people at the ceremony.

"It was like Mazurek was parting the clouds," said Rick Bartolotta of AFSCME Local 650. Hawley is a member of the local, and Bartolotta listened last spring as Hawley began explaining Mazurek's tale when the two men saw each other at a general remembrance at a workers memorial at Chestnut Ridge.

"I said, 'This is a story that needs to be told,' " Bartolotta recalls, and he promised to help link Hawley with other union leaders within greater Buffalo.

'A martyr for working people': Tale of hero steelworker comes to life

The result was a ceremony this week, where Rev. Benjamin Fiore offered a prayer that asked for a "path to justice for all working people," and former steelworker George Grace read a poem of how a young man who fought in Europe for the "highest notions of justice" was shot in cold blood outside the gates of his American workplace.

Robin and Joe Bacon performed some old-time labor songs, and everything came together when an honor guard from VFW Post 1419 sounded taps and offered a 21-gun salute. 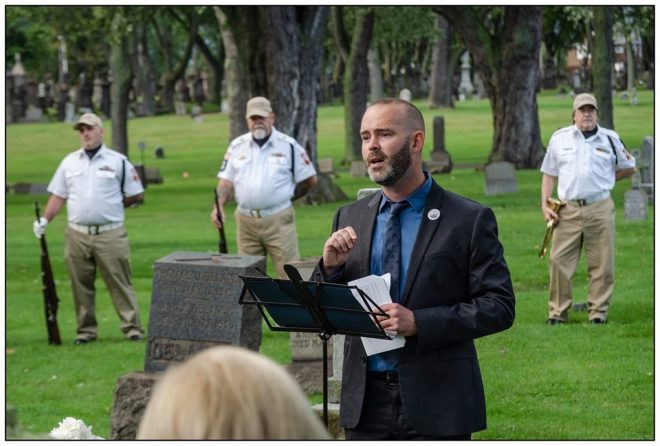 Wegryn said you had to be there to understand the feeling, almost a presence in the air. Hundreds of miles away, in Massachusetts, Mazurek's nephew Norman – a retired Air Force career man whose wife, Betty, had an important medical appointment Monday – went outside and stood with Betty by an American flag in their yard, thinking of the event in Lackawanna.

Norman, 81, never knew the tale about his uncle until a few weeks ago, even though documents show Norman's dad went to the morgue after the shooting in 1919 to pick up Casimer's few possessions. It was genealogist Megan Smolenyak who made the family connection, and Norman believes the sheer rage and grief of what happened, this young war veteran killed for standing in a crowd, wounded his family to such a degree that Norman's father could never speak of it.

Always, Norman said, he sensed some pain, some missing narrative, within the family.

What happened Monday, he said, was a gift beyond words, as if someone lost to them all had been returned. 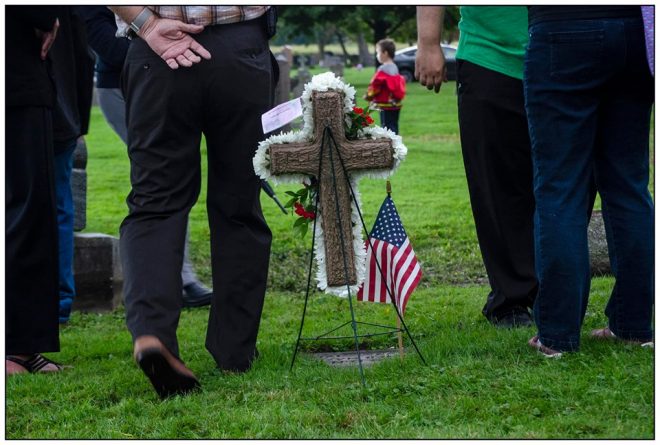 The grave of Casimer Mazurek is decorated with flowers sent by Casimer's nephew Norman. There is talk of raising the stone from the soil, to stand as it was first intended. (Image courtesy of Greg Meadows)

He sent a floral cross that rose above the grave. It offered prominence, a sense of place, and there was some quiet talk among labor officials about finding a way to repair Mazurek's tombstone so it stands upright again, as it was meant to do.

Richard Lipsitz, president of the Western New York Area Labor Federation, AFL-CIO, said his organization will host another remembrance at some point this autumn at the Steel Plant Museum of Western New York, and Norman Mazurek will receive an invitation.

Hawley, too, is hardly finished with the tale. He wants to know more about Buczkowski, the other man killed by the gunfire, and Frank Werlack, the child who was shot. He and Bartolotta both spoke of the ongoing importance of reviving tales of memorable sacrifice by the men and women whose toil built the Niagara frontier.

While Hawley said his goal will be erecting a historic plaque at the gate where Mazurek died, he said the most powerful element of Monday's event was speaking by telephone a few days earlier with Norman Mazurek, the idea of how Casimer's death still had living pain and resonance for someone far away.

"I thought I'd be talking about this in the abstract," Hawley said, but instead Norman's flowers provided a reminder of how such a loss "clearly had ramifications, even a century later."

Before the ceremony at Mazurek's grave, Poloncarz mentioned concerns about impending lightning strikes, and the speakers did their best to hurry it along. Hawley said he is not an especially spiritual guy, but he and Wegryn and Bartolotta and everyone in the crowd said it was impossible not to feel a little wonder at the way it all wrapped up.

The honor guard finished and everyone had just started to drive away when the rain came in a downpour, so hard you could barely see.