Without fanfare, on Labor Day 1956, the SS Canadiana – “The Crystal Beach Boat” – made its last daily run on the last day the Crystal Beach amusement park was open for the season.

It wasn’t until a couple months later it was announced that the old steamer, moored in its spot by the Marine Drive Apartments, had carried its last Buffalonian across the lake for summertime fun.

The Canadiana was the last commercial passenger ship built in Buffalo, completed by the Buffalo Dry Dock Company specifically for the Buffalo/Crystal Beach run. Launched in 1910, there were 18,400,000 passengers on the Canadiana, in loads of 3,600 at a time, five trips a day from the foot of Commercial Street.

“Happiness was the order of the day aboard the Canadiana,” wrote Clare Allen in the Courier-Express. “There was excitement and anticipation on the faces of the passengers as they crowded aboard laden with picnic baskets and small bags bulging with bathing suits. They were enroute to a big day at the beach with its thrilling rides, fun house, lunch in the shady grove and a swim. In the evening there were moonlight cruises and dancing to an orchestra that played the hit tunes of the day. It was a perfect setting for romance as boy met girl on the dance floor or standing shoulder to shoulder along the rail watching the foam curve from the bow, back along the sides of the Canadiana.”

By the 1950s, the number of people taking the Crystal Beach boat had dwindled sharply.

The low numbers were even lower after a fight on the boat on Memorial Day weekend 1956 was described in newspapers around the world as a “race riot.” 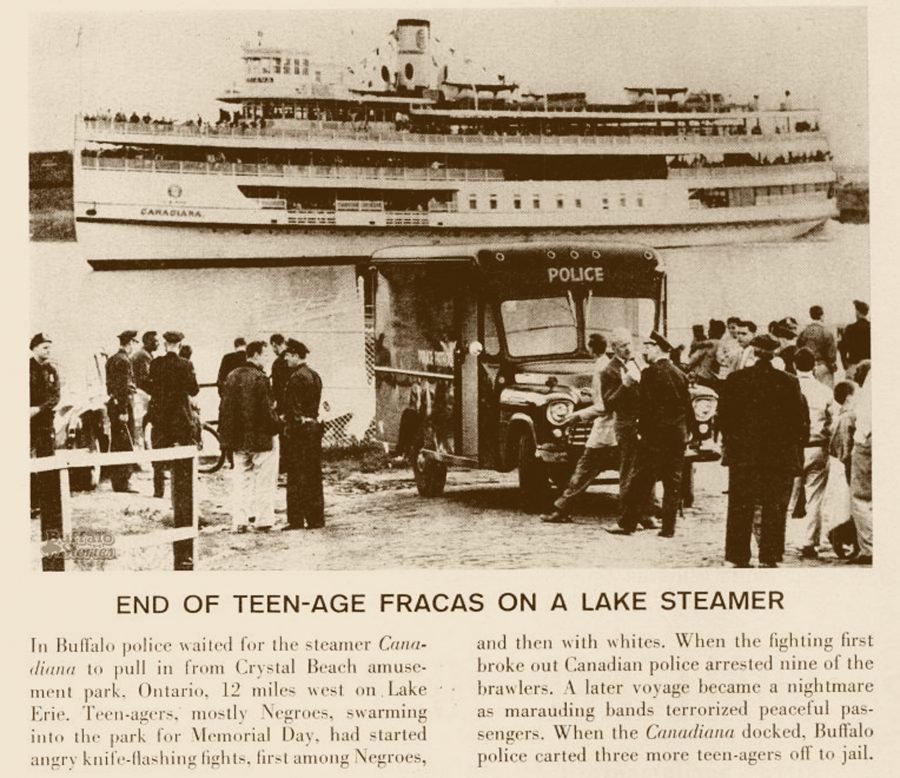 Life Magazine's synopsis of the Memorial Day fracas aboard the Canadiana in 1956.

Though it was bought and sold a handful of times, plans to make something of the Canadiana never materialized.

“The vessel that for years echoed the laughter of children and adults is silent except for the sound of torn tarpaulins fluttering in the breeze and slapping against the stanchions along the rail. She sits like a proud though somewhat tired dowager keeping watch over the smaller pleasure boats moored in her shadow,” Clare Allen wrote in the Courier-Express in 1963.

After the Canadiana had a failed run as a passenger ferry near Toledo, it was moored near the foot of Austin Street, and a sad sight for many as they drove past on the I-190 through the mid-1960s.

When efforts through the 1980s and 1990s to restore the ship and make it a floating museum fell short, it was eventually cut up for scrap. 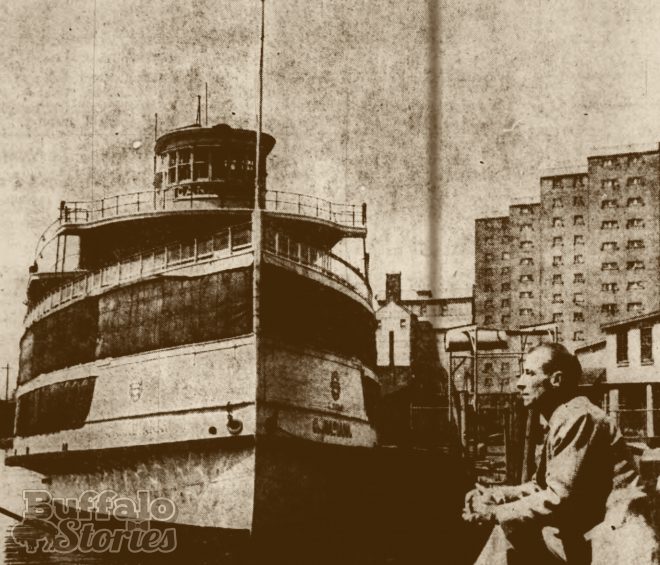 The Canadiana, docked at Commercial Street near the Marine Drive Apartments, in 1958.