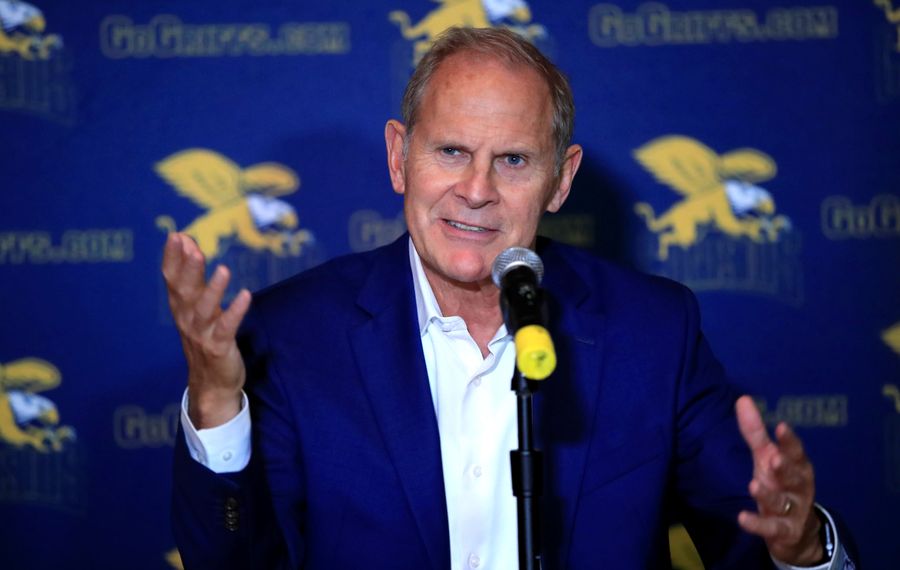 John Beilein has always been thankful for Canisius College, even though it took the folks under the Golden Dome five years to come around and give him the job as their men's basketball coach.

In 1987, Beilein was a candidate to replace Nick Macarchuk at age 34 but the school went with Marty Marbach and it was a reasonable choice. Marbach was two years removed from winning a national title at Villanova on Rollie Massimino's staff, and any school would have hired him at the time over a Division II guy. So Beilein simply went back to work at LeMoyne in Syracuse.

Marbach never meshed at Canisius and was gone in 1992. Beilein got back in the hunt again but it looked like Vermont's Tom Brennan was going to get the gig this time. As Brennan faithfully told the story over the years on the banquet and NCAA Tournament circuit, he was so sure he was getting the job he told his wife, "At this time tomorrow, you'll be sleeping with the next head coach of Canisius."

The next day, Canisius reversed its field from five years earlier and hired Beilein in what rates as its best basketball move of the last 60 years. The reaction of Brennan's wife: "So is Beilein coming over here or am I going over to his house?"

The Koessler Center, Memorial Auditorium and the first year of then-Marine Midland Arena became Beilein's houses as he put together an incredible five-season run at Canisius with an 89-62 record highlighted by the best three-year stretch in school history. He left in 1997 and his career blossomed further at Richmond, West Virginia and finally at Michigan, where he became the school's all-time victory leader and got to the national championship game twice.

Now, the Burt native is at another crossroads.

Beilein was back in town Tuesday to accept induction into the Canisius Sports Hall of Fame at a fund-raising dinner in his honor on campus. And a special moment in his career comes when he's preparing for monumental change at age 66 -- less than a month away from his debut as an NBA coach with the Cleveland Cavaliers and less than two months away from his son, Patrick, tipping off his first season as the head man at Niagara.

Beilein is coming off a 30-7 season at Michigan and lost only 56 games combined over the last five years. Plenty of NBA experts think he might lose more than that in his first year in the NBA with a rebuilding Cleveland squad but that's OK.

He's all about starting at the bottom, right back to that first season at Canisius.

The 1992-93 campaign had an inauspicious start for the Griffs -- a 110-62 loss at Duke, coming off its two-time national championship run, and an 85-67 loss to St. Bonaventure at the Aud that saw the Griffs trail, 10-0, and never recover. By the end of the season, however, Canisius had improved dramatically. Games got tighter. No. 3 Iona was upset in the quarterfinals of the MAAC Tournament on a Binky Johnson runner in the lane in the final seconds and No. 2 Niagara struggled to a five-point win over Beilein's crew in the semifinals.

It's a year Beilein will never forget.

"When I think about my tenure at Canisius, it's so much about that first year which was the worst year," Beilein told The Buffalo News prior to his induction Tuesday. "It's 10-18. The memories that happened during that time are riveted in my mind forever because it really shaped the culture for those next four years. Beating Iona on Binky Johnson's "toilet bowl" -- around the rim around the rim going in. The summer that I spent here away from the family just trying to get this thing set.

"When I came to Binky's Hall of Fame night here a few years ago, I was trying to get through to young players at Michigan. He says to me, 'Coach, the turning point for me was when you said, 'Binky, you just want to play basketball and the coaching staff is trying to make you a basketball player.' I had forgotten all about it and I went right back to Michigan the next day when they were just making stupid plays and said, 'We're trying to teach you how to play basketball.' I think I really learned a lot that year."

More from John Beilein, who is being inducted into the Canisius College Sports Hall of Fame tonight.

He discusses his upbringing in western New York and being a Little 3 basketball fan. @Griffs_MBB pic.twitter.com/6tlW6DJGaV

By the time he left, Beilein had led the Griffs to trips to the NIT in 1994, the NIT Final Four in 1995 and the NCAA Tournament in '96, still the school's only trip to the Big Dance in the last 63 years.

"I was just trying to survive to the next day, trying to turn the Canisius program around," he said. "I knew it was going to be difficult but I had practice at it. Whether it was Erie Community College, Nazareth or LeMoyne you had some practice in it. Now I have a lot more practice."

This is a good time for Beilein to go to the NBA. It's not a big man's game nearly as much as it used to be. It's about the three-pointer, and about big men being able to stretch outside and fire away as well as pass the ball. Beilein did that here a quarter -century ago, with 6-foot-9 Canadian center Micheal Meeks able to shoot the three and forwards Darrell Barley and Craig Wise both piling up 100+ assists a season.

It was a difficult decision to leave Michigan but the challenge of college coaching took its toll. Beilein had heart surgery last summer and endured the eye-opening aborted takeoff and crash of his team's plane en route to the 2017 Big Ten Tournament. The NBA lifestyle is different, with much more staff and much more down time.

"The fact they they were in a total let's-get-this-thing going mode where we're going to build a culture and have young players was it," Beilein said of the Cavs. "Collin Sexton, Darius Garland, Kevin Porter Jr, Dylan Windler are mainstay guys right now and that's who I've been coaching -- 18- to 22-year olds. "Cedi Osman, guys 24-25, I've had like that. Mike Meeks was a 23-year-old senior at Canisius. It's right up my alley. If they said, 'We've got a bunch of 32-year-old veterans who have been in the NBA for 12 years', that wouldn't have been a good mix."

After career of major challenges, Beilein accepts the biggest one of all

The national narrative since the move has been that college basketball, perennially mired in scandal, is in real trouble if a straightshooter like Beilein doesn't want to stick around.

"I loved every bit it of it but it was just time for that change in my life," he said. "I couldn't see myself still going seven days a week for 50 weeks a year. I just didn't think it was best for me."

Beilein disputes the notion the sport is in trouble, pointing out there's plenty of full arenas and the Final Four remains one of the top events on the sporting calendar.

"We're in the midst of transition right now in a lot of areas," he said. "The most difficult thing is when do guys go? Baseball has got it figured out. Football has got it figured out. Basketball, it's one of the biggest compelling problems with some players is if they go four years and they graduate from a place like Michigan, they think they're a failure, they didn't go pro early.

"A lot of the good ones, the pressure to go pro is so daunting on them. Kids almost apologize when they stay to get their degree. No, no, no. This is good too. So we've got to find somewhere of a medium there."

Beilein is heading to a franchise where Mike Gansey, his former player at West Virginia after a transfer from St. Bonaventure, is now an assistant general manager. He was Patrick Beilein's roommate in college and a key reason John Beilein made the move even though the elder Beilein knew hard times might be ahead. Just like they were in Buffalo 27 years ago.

Beilein relished his Canisius memories, like the NCAA run and the 1995 NIT win over Washington State at a sold-out Aud that sent his team to the Final Four in New York via an atmosphere akin to the glory days of the Little Three.

But there's now one issue. Twice a year, he has to root against his old school -- and his former ECC player, Reggie Witherspoon -- because his son is wearing  purple.

"Six months ago you were my favorite MAAC team. You're not my favorite MAAC team anymore -- but you're my second--favorite," Beilein said, giving a preview of his remarks to the crowd in the evening. "I have trouble wearing the purple gear Patrick has for me and I've got to get used to it, but I think I'm going to love it."

What a GREAT night it was celebrating @JohnBeilein induction into the @CanisiusCollege Sports Hall of Fame. It was a special five years for our family in Buffalo. pic.twitter.com/B3ZJAE0ZsT