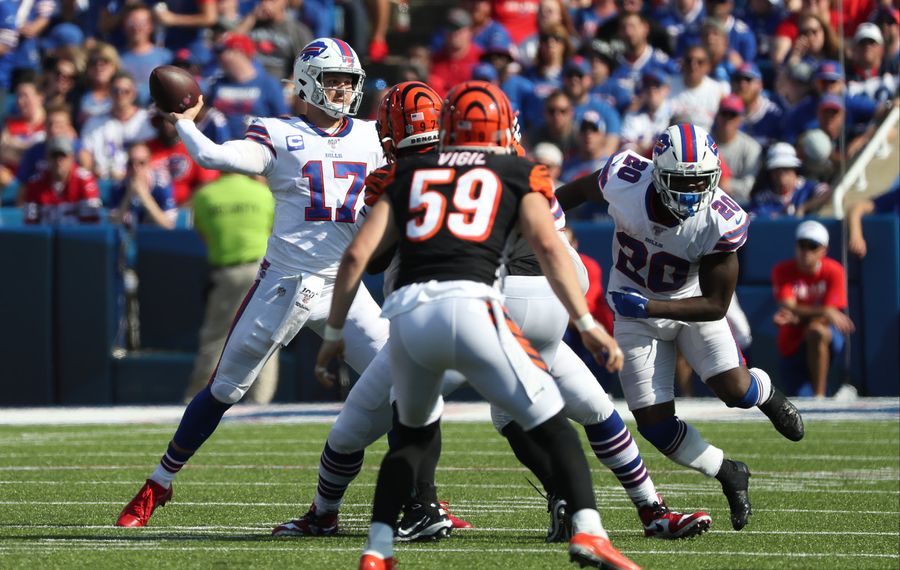 The guy has got game, especially when the game is on the line. Bills quarterback Josh Allen has five comeback victories in 13 starts he has completed. And on many plays, that game is Madden.

Allen’s highlight plays, using his Gumby legs and arm, are often hard to believe on second and third viewings even when you know exactly what happened already.

It is the seemingly boneheaded mistakes, of course, that leave most fans pulling our hair out.

But we often ask too much of quarterbacks. To always make the right decision, while thinking of 20 things, dissecting defenses, in the intense heat of battle, with everything on the line, and 300-plus pound drooling superfreak sadists intent on ripping your head off and heart out.

Trying to tame Allen and eliminate his mistakes is a losing, and loser, strategy. You would eliminate three or four times as many plays as you’d gain. The right ploy, which is surely tricky business, is to just try to minimize them.

Allen bluffs a lot, takes countless chances and places big bets on his cannon arm, crazy legs, fearless heart and boundless confidence, often going all in. But he wins many more hands and pots than he loses, and you might need to consult your doctor about heart trouble if you are a Bills fan and do not get used to it.

Of course he cannot make that interception. It is intolerable. Even Josh admitted how horrific a thought, let alone, pass and play that was. He said it will never happen again.

Sorry, Josh, but it will, and it will be OK. We do not need to condone it, we should own it.

We all gushed over the play when he fell, fumbled, scooped it up, ran, escaped, and then threw a perfect short dart over the middle to Tommy Sweeney (who was amazing in Peaky Blinders, by the way). A sure seven-yard loss, and maybe loss of ball, for a three-yard gain. But Allen threw across his body, while running, to the middle of the field, the exact thing he is never supposed to do.

It is such a fine line. On the quintessential Allen scramble right, outracing defenders to the sideline by running backward and then around them, all while looking downfield, and gunning a long first down completion to John Brown, Allen had a little room to use his surprising foot speed.

On two similar, thought-to-be inexcusable plays, he had a yard or so less room when the Bengals pounced immediately (we’re looking at you, Cody Ford), so Allen couldn’t run back and around them. He ran backward and they were right in his snoot and field of vision. The results were an interception and intentional grounding.

But we are asking Allen to always sense and know, instantly, that he has one yard more of room on the Brown play and one yard less on the other two.

I’m not excusing two heinous decisions. They were just plain awful. But the solution is to point it out on the sideline and later on film, and try to get him to throw it away a nanosecond earlier some of the time. It’s an incredibly tiny window before you negate what he does best, and the chance to be great; something we all want so badly.

Allen has only started and finished 13 games now. He is 8-5, with four consecutive wins, two of those four late in the fourth quarter. But as fans, we are already spoiled by his Houdinis, and just seem to expect it. At least 10 times against the Bengals’ ferocious front four, he instantly or miraculously avoided a sack, turning sure losses into positive runs or complete passes, including three runs on the last drive.

There were also as many big drops or mistakes by receivers as the blatant blunders he made.

Sweeney needs to jump and take that ball in the end zone, which was an insane play by Allen. The deep throw to Robert Foster might have been ill-advised into tight coverage but an absolutely perfect rope that is a TD if the safety doesn't lunge and knock it away at the last second. Dawson Knox obviously had a heroic day but also a drop that's a first-and-goal at the 3-yard line. T.J. Yeldon's fumble cost at least three points.

Allen was, of course, not alone. The defense was all but flawless in the first half, and held on in the second. Micah Hyde could have been arrested for felony trespass and larceny for ripping the ball off John Ross in broad daylight. Tre'Davious White had two interceptions. The D gave up only two first-half first downs, both in the last two minutes that ended with no threat.

Sure, they gave up 17 points in the second half, but you win most NFL games doing that. Like Allen making multiple plays to score a TD to win in the last five minutes, the D made several plays to stop a TD and take the ball away in the last five seconds.

Knox not only scored his first TD since a junior in high school, but had another sizable gain on a catch, a surprisingly quick TE reverse for a nice chunk, and the play of the game, the late double-Bengal beat-down that PETA might investigate for cruelty to animals.

But the Bills go as far as Allen takes them, and he is already a baller. Between accurate passing, scrambling, running, reading defenses, making plays and winning, he has a complete game. All we should be looking for is four quarters of more smart, scoring plays, and one or two less head-scratchers.

Less misfiring synapses as much as passes.