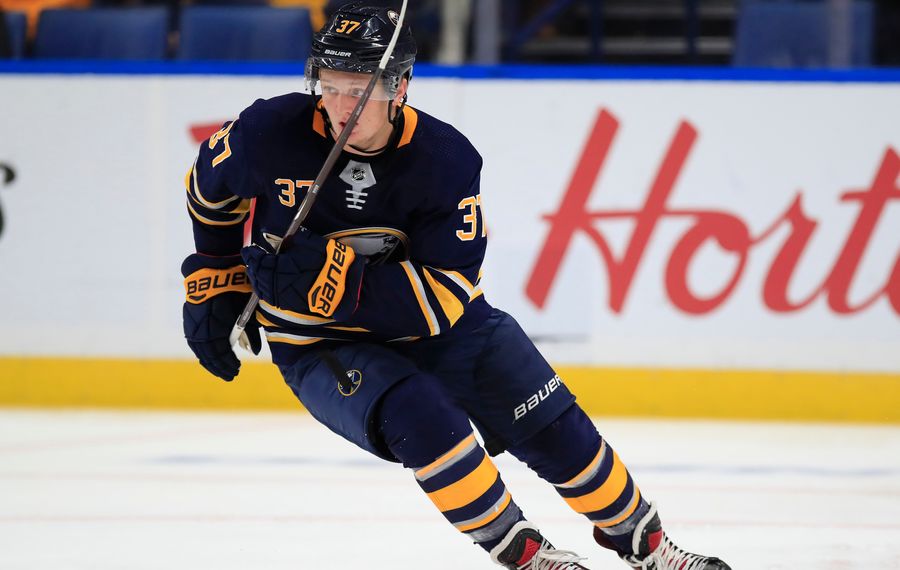 With only six games of NHL experience on Casey Mittelstadt's resume, hindsight shows it was unfair to gift him the role as the Buffalo Sabres' No. 2 center ahead of last season.

The Sabres are now trying veteran Marcus Johansson in that role while Mittelstadt, 20, continues to learn about life down the middle in the NHL and new coach Ralph Krueger's system.

"Playing center anywhere in the NHL is tough. You have to play the whole rink and be responsible no matter what system you're in," Mittelstadt said after practice Monday in KeyBank Center. "Ralph has told us to rely on instincts a lot, make your own reads and I'm getting more comfortable with it."

Mittelstadt has been outplayed much of this preseason by No. 1 draft pick Dylan Cozens but took steps forward during Friday's loss at Toronto and was on a line at practice Monday with Jimmy Vesey and Evan Rodrigues.

That could be a trio in Wednesday's game here against Columbus. Cozens, who only played 8 1/2 minutes in Saturday's win against the Leafs after two previously strong outings, did not have a line Monday. That's a sign he's probably heading back to juniors this week.

Mittelstadt got heavy use in his first game of the preseason Tuesday at Columbus, as he got stuck on the ice for four shifts over 90 seconds and clocked a team-high 23 minutes, 23 seconds. But in all that ice time, he had no shot attempts and was just 3-10 on faceoffs.

Mittelstadt started slowly Friday as well but became more engaged as the game went on. He played 14:37 and had six shot attempts, albeit only one on goal. In the circle, he improved to 4-6.

"The first game is always a little tough, trying to get your feet and hands back up to speed, and I think that showed," Mittelstadt said. "I started feeling a lot better the second game, making a few plays. That's something I have to keep building off of. By game three, your hands and game shape should be there fully. You start getting it going now when it gets close to the regular season. It gets real."

Mittelstadt also had a great chance to break the Sabres' shutout with five minutes left as he broke in alone on Toronto goalie Michael Hutchinson but hit the crossbar with his shot.

"I started to have some better shifts in the second period to build up to that," he said. "I thought I had it, just hit the crossbar. But it was nice to get that chance, work into that spot."

Krueger has said multiple times in camp he understands that his system puts the most pressure on the men in the middle. That makes it especially tough for younger players such as Mittelstadt, who had 12 goals and 13 assists last year with a minus-19 rating in 77 games.

"His curve is definitely in the right direction," Krueger said. "He's understanding more and more of the concepts that we're trying to play. He's all-in trying to get it right. Lots of good questions coming from him and I think through the questions he's finding answers. We'd like to take a look at him again on Wednesday and see how that evolution is.

"For young players, the responsibility we're expecting here without the puck and the commitment to that game is large. It will take a little bit away from their offense as they grow into that understanding. But the offense will follow."

Mittelstadt skated Friday with Vladimir Sobotka and Kyle Okposo but got an upgrade on linemates Monday. Rodrigues liked the combination and said his versatility can help Mittelstadt through the rough patches.

"My entire life I've been able to go out and figure it out. I would say maybe I'm asking a few more questions," Mittelstadt said. "It's a new system and you're always going to do some things maybe you haven't done before in your life.

"He can't overthink the game. He's got a high hockey IQ and he's very skilled," Rodrigues said. "Just play his game. As a center, there's a lot of work to be done but if we do play together we can both play on the wing and at center and can help each other out. He has to play his game, make plays, just read and react and that's what he's good at. We'll try to get him doing that this week."

Cozens gets a 'badge of honor'

Cozens, who survived the first major roster cut of camp Sunday, took a stick to the lips during practice Monday and was getting stitches while the media was in the locker room. Cozens didn't appear to miss any time in the workout.

"He's got a first badge of honor here," a smiling Krueger said. "But he took it well, bounced right back into practice and got stitched up after. We love the way he's involving himself in the group and looking for his opportunity here. Let's let him continue to push the group for now. He's definitely here to continue to grow and learn right now."

"I think he's done a great job," Mittelstadt said of Cozens. "He's been over with me and (defenseman Rasmus Dahlin) hanging out a couple of times. He's a big kid, pretty funny. He can fly and make plays with the way he's moving fast. It's exciting to see and he's got a great future."

Jean-Sebastien Dea and Conor Sheary (both lower body), Johan Larsson (upper body) and Rasmus Ristolainen (illness) all sat out practice and are listed as day to day. Larsson has not played since the opening preseason game Sept. 16 against Pittsburgh but Krueger said he's hopeful to get him back on the ice Tuesday.

After the workout, Dea was assigned to Rochester pending waivers. That move is a little surprising, because Dea was signed to a two-year, $1.4 million deal over the summer and his one-way deal means he will making $700,000 to play in the AHL.

Winger C.J. Smith and goalie Andrew Hammond, both placed on waivers Sunday, each cleared Monday and reported to Rochester. The Amerks opened their training camp Monday.

The Sabres have 35 players on their roster and 30 actively participating in camp. With Monday's missing joining Scott Wilson (lower body) on the sideline, 26 players were on the ice.