Eric Bish and Angela Collins met at the Bills’ home opener in 2016. Their first date was 10 days later for the Bills’ game against the Cardinals. They have gone to every game together since for the last three years.

So when it was time to pop the question, Bish knew it had to be at a Bills game.

In June, he decided that he was going to propose to Collins at the home opener, and he and Collins’ mother went looking for a ring. That set the plan in motion for the scene Sunday in a parking lot at New Era Field when Bish presented Collins with roses as the 30-plus people at their tailgate gathered around. He began reading from his phone and then reached down into his custom Bills cowboy boot for the ring box and took a knee. He asked the question. She nodded as some tears began. They hugged and kissed and the “Shout” song began.

“That is where we met. And I wanted to do it around all of our family and friends that we have met at the Bills games over the last three years,” Bish said Monday. “Yesterday was honestly the perfect day. Great weather, great people around, and a Bills win to go to 3-0. Couldn’t have been a more perfect day!”

Collins is from Williamsville and Bish is originally from Pittsburgh but is a longtime Bills fan who was traveling to Western New York for every home game. He moved to Buffalo in June 2018 to be with Collins.

When tickets went on sale for the Bills season, he bought extra tickets for Collins’ mother and stepfather, father and brother and for his parents so they could be here from Pittsburgh.

“She had no clue this was coming,” Bish said. “We kept it a secret since June. Angela was the only one at our tailgate of 30-plus people that had no idea.”

Well, maybe not no idea.

“I didn’t know it was going to happen then and I was not anticipating it whatsoever. It was more of a wish," Collins said. "I was hoping it would happen. I wanted it to happen at a Bills game so bad. It means so much for us to be there.

"I went to the bathroom and came back and walked right past and then he's like, 'Hey, come here,' My first thought was, 'Oh, my God, there are all these people. He has roses. This is happening, like, right now.' It was wild. This is legit where we met three years ago.

"We parked in the same spot every time in the lot across from the New Era store. Same people. I was so surprised, I had to put my hand up over my face. It was like full circle."

Among the thousands of fans at Bills games, how did they meet? That part of the story goes back to those Bills boots.

"I’m not like normal girls," Collins said. "I’m a little spunkier. Girls don’t hit on guys the way that guys hit on girls but I saw his boots and was like, 'Hey sweetheart, I like those boots." He was looking around like, 'Wait, me?' We got each other's number and it was very casual. He asked me if I wanted to go to a Bills game. I thought he was so cute but didn't really think it was going to work out.

"He told me he had season tickets so I thought, 'He must be loaded. I'm totally going out on a date with him,' " she said, laughing.

Bish brought Collins to every Bills game. He explained that his family lived about 30 minutes from where Jim Kelly grew up in Western Pennsylvania and had been coming to Buffalo since he was 12.

Still, Collins was skeptical of a long-distance relationship. After the season, they would see each other once a month, then every three weeks, then every other week and then "we couldn't be without each other," Collins said.

Collins said she is "too Buffalo" to move away and Bish was more than willing to move to Western New York without any hesitation. After a year of trying to get a job, Bish found one and moved.

"People say you get sick of the person and get bored of someone, but since June 2018, there is not one day since I don’t want to be with him," she said. "We complement each other so well. He molds around me with whatever I need. I think that’s crazy. There are not a lot of guys in the world that care so deeply and go out of their way like he does.

"The Bills hooked him and I reeled him in the rest of the way. ... Buffalo is such a special place for me."

The craziness includes packing 12 people into a van and driving back and forth to Jacksonsville for the playoff game in 2018. Or freezing through every moment of the snow game against Indianapolis.

No wedding date has been set but the couple is looking at 2022. If it were up to Collins, a summer wedding at New Era Field would be just right. And yes, she's been a Bills fan long enough that she still refers to the stadium as "The Ralph."

"We so badly would love to get married on New Era Field but not during a game," Collins said. "Even one Saturday in the summer when they're not busy. They could fold up lawn chairs and it just be in and out. It would be so special. The Bills mean a lot to us. ... We just love everything they’re about." 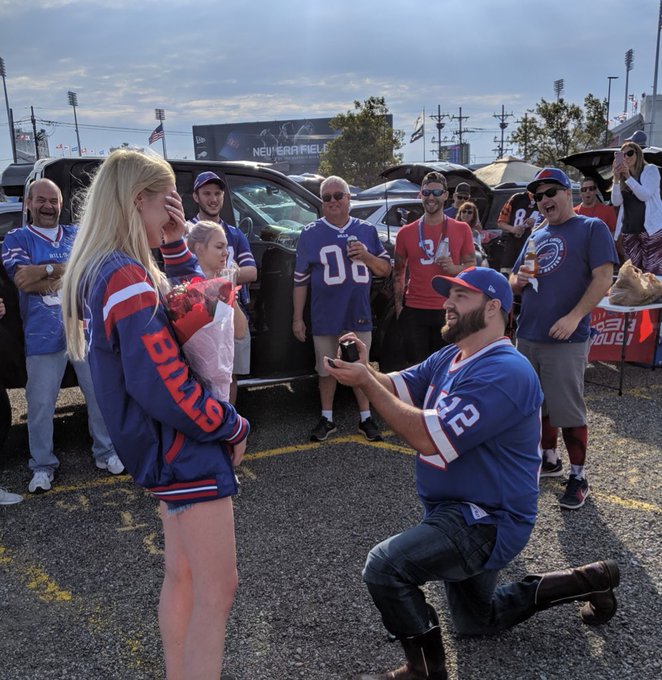 Eric Bish gets on a knee to propose to Angela Collins on Sunday at New Era Field. (Photo courtesy of Eric Bish)