Musical revues can be tedious. When they force the esteemed catalog of a performer, songwriter, history or culture through an unnecessary dramatic construct, and pretend like it isn’t an infomercial. It’s the same eye-rolling we give to award show presenters. Can’t we all agree to skim the fat and get to the point? Why not produce a concert or cabaret instead, I always wonder.

Some find a way to make it work. They keep the dramaturgy simple and focus on the real gem: the music.

Thomas W. Jones II and William A. Knowles’s “Ladies Swing the Blues,” now onstage at the Paul Robeson Theatre, takes a noble stab at this kind of revue. It marries songs made popular in and around the famed Birdland jazz club — where Charlie Parker swung now-classic hits with the likes of Billie Holiday, Sarah Vaughan, Peggy Lee and Ella Fitzgerald — with originals that give context to the story.

Jones’s work as director makes a more lasting impression than his book, which dwells a little too long in a few scenes. But the idea is there and it moves nicely.

We enter Birdland, set up on the theater stage and in pockets throughout the audience, and feel embedded in the legendary club. The lipstick-red curtain that hangs upstage with a big, tall “Birdland” spelled out in lights is a strong anchor in Paulette Harris’s scenic design. This feels like a nightclub. Her lighting design casts moody colors and evocative visions in the music’s shadow. 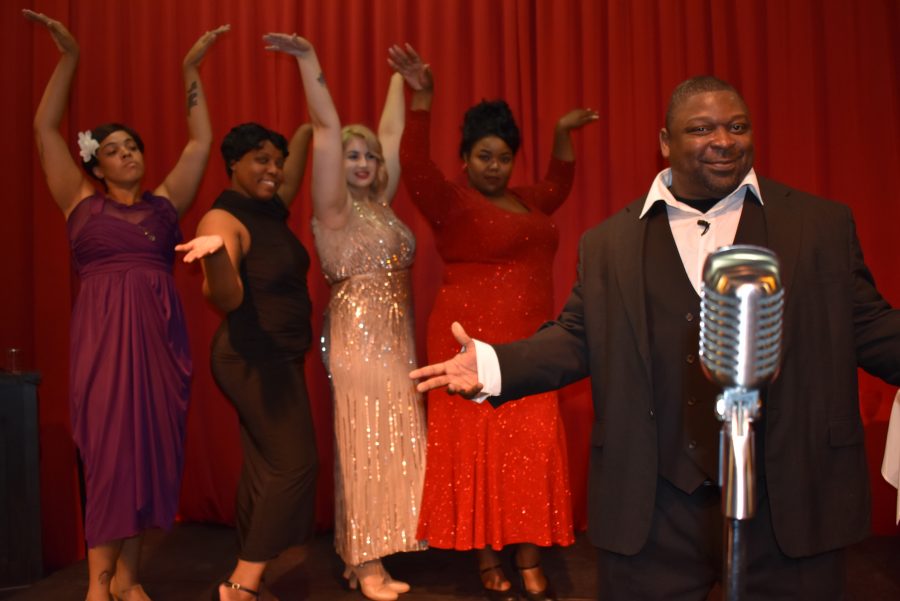 Charlie Parker has just died, rather mysteriously, in the hotel suite of infamous Baroness Pannonica de Koenigswarter, a generous patron known as the “Jazz Baroness.” It’s believed his premature death, at age 34, was the result of multiple health complications brought on by drugs, booze and the blues — the classic jazz combo. But the Baroness lingers here, longer than she should.

Those ladies — superstars in their own right — appear in a swirl of revolving vignettes set on the Birdland stage and in a dreamy atmosphere. Their movement and monologues border on the poetic — a nice brew.

But Jones’ book also gets close to painting this as a murder mystery, which it isn’t. Parker wasn’t murdered, even if the notion of the Baroness taking him into her home is a tempting narrative pursuit. Exposition among Holiday, Vaughan, Lee and Fitzgerald, who spend the show mourning, memorializing and gossiping about Parker’s relations, is a rumor mill without resolution. The motivation behind this storyline is not always clear.

Kacy Lynn Carbone does a rocky job imparting the intrigue around her patronage, playing her with a single, sultry-lite note. Carbone also plays Lee to much to the same effect. She is a bit of a weak link in this ensemble, to be honest, though she works hard and appears to be having fun. Her castmates excel vocally, stumble on lines and blocking. They could use another week of rehearsal to tighten things up.

Latosha Jennings lives up to Sarah Vaughan’s “Sassy” nickname, powering through her songs like a freight train. Lily Jones delivers the best dramatics of the night as Billie Holiday, and coos like a bird. Brittany M. Rumph is a delicious Ella who interprets Thelonious Monk’s “ ‘Round Midnight” and Benny Goodman and Lionel Hampton’s “Flying Home” as if in her own show. She is a triumph here.

John Campfield gives a spirited if too excited rendition of Charlie Parker, weaving in and out of his memorial like a ghost gone too soon. Campfield’s line delivery often makes it hard to digest the weight and syllables of his words. So does the sound mix, which makes it almost impossible to hear distinct lyrics or leading vocals. We can tell these are estimable singers; there’s no argument there. But we can’t hear them as clearly as we need to.

Not when you have Frazier Thomas Smith’s five-piece jazz combo working hard in the corner. These guys are the heartbeat of the show. They solidify everything that embodied the spirit of the Birdland sound, that aviary of soaring ambition and incredible flight. If you visit this show for any reason, let it be their music.