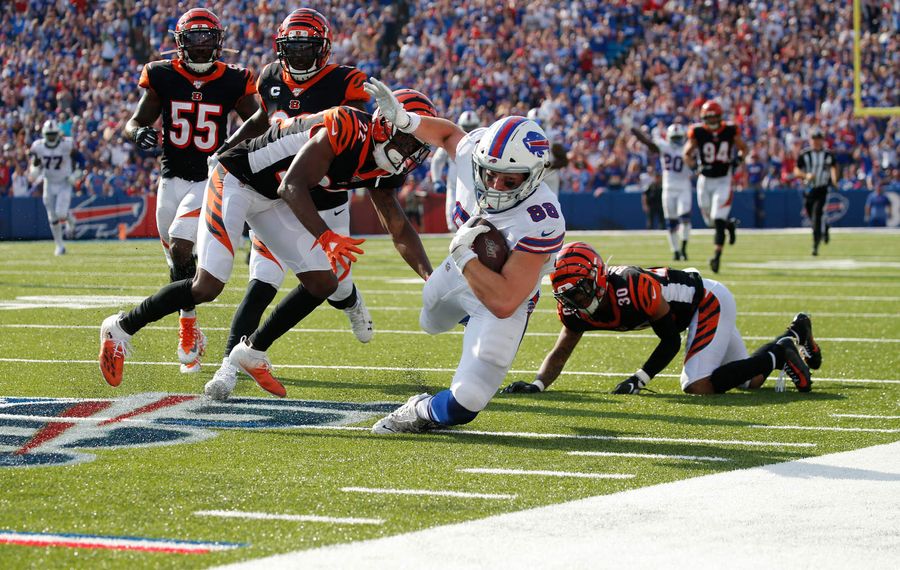 It’s been a long time since Dawson Knox found the end zone.

You have to go back to 2013, when Knox was a gangly junior for Brentwood Academy in Brentwood, Tenn. He would suffer an ankle injury in the first game of his senior year, then played three seasons of college football for Ole Miss without reaching the end zone.

His personal scoring drought ended when he caught a 1-yard pass from quarterback Josh Allen with 3:03 remaining in the first quarter Sunday against the Cincinnati Bengals at New Era Field.

It ended up being the second-biggest play Knox made in the Bills’ 21-17 victory. After falling behind, 17-14, with 4:54 remaining, the Bills took over possession on their 22-yard line. After a 7-yard completion to Cole Beasley on first down, Allen found Knox wide open down the left sideline. The rookie tight end rumbled 49 yards to the Bengals’ 22-yard line. Along the way, he plowed through Cincinnati safeties Shawn Williams and Jessie Bates III.

“When plays like that happen, it just comes down to instinct,” Knox said. “You don’t think a whole lot.”

Knox finished the game with three catches for 67 yards and one touchdown. He even got his first career carry, gaining 9 yards around left end late in the first quarter. It was the first rushing attempt by a Bills tight end since Robert Royal was dropped for a 9-yard loss on a carry in 2006 and the longest gain since Ryan Neufeld picked up 14 yards in 2003.

“I see it every day, the way he works. I know what kind of person he is,” fellow tight end Lee Smith said. “He ain't got to flip on a switch. That's just who he is. I think the Buffalo Bills should be super excited about having that young man in this tight end room.”

Knox’s teammates were having fun with how long it’s been since he scored a touchdown. Even the rookie himself was able to laugh about it in a jovial postgame locker room.

“You know, honestly, I never thought about it,” he said. “I just took it game by game. If they needed me to score I would, but, yeah, it's funny.”

The Bills believed in Knox’s ability enough to trade up in the third round to acquire him. Through three games, he’s flashed enough to show why they made such a move.

“He's a great young player,” Smith said. “He's about the right things, and he makes it easy for me to lead, because he's like a sponge. All he wants to do is learn and get better, so it's a lot of fun.”

Knox was one of three tight ends active against Cincinnati. He was joined by Smith and fellow rookie Tommy Sweeney. Veteran Tyler Kroft missed his third consecutive game and a chance to face his former team after he suffered an ankle injury during the practice week. Kroft left the winning locker room with a boot on his left foot. If he misses extended time, it will only mean more opportunities for Knox.

That’s good, because the rookie is far from a finished product. He dropped a perfect pass from Allen in the second quarter at the Bengals’ 5-yard line. It was his third drop in as many weeks.

“I think there's always areas I can work on,” Knox said. “That's definitely one of them after a couple drops. So I'm going to continue to get with Josh, continue building that chemistry and make sure that doesn't happen.”

Knox’s teammates rallied around him after the drop, and he repaid them in a big way in the fourth quarter. His play got the Bills in position for a come-from-behind victory that improved them to 3-0 — setting up a Week 4 showdown with fellow unbeaten New England.

“It was incredible. I've never seen anything like it,” Knox said of the atmosphere inside New Era Field on Sunday. “That type of energy, the players feed off of and we can really feel it when the fans do that. I think they have more of an impact on the game than they realize.”

If Knox was impressed by the crowd Sunday, just wait until next week.

2. Starting right guard Jon Feliciano suffered a neck injury in the first half. The Bills then shifted rookie Cody Ford inside from right tackle, where he had been splitting time with veteran Ty Nsekhe.

It was announced at the start of the third quarter that Feliciano would not return to the game. He was wearing a neck brace in the locker room after the game.

Nsekhe limped off the field with 5:39 remaining in the third quarter after a 22-yard carry by Frank Gore. That brought Spencer Long into the game at right guard, with Ford bouncing back outside to tackle. Nsekhe missed just one play, though, before returning.

3. Coach Sean McDermott made an unconventional call after Knox’s touchdown. After the Bengals were penalized for having too many men on the field, McDermott elected to have the penalty enforced, which moved the ball to the 1-yard line. From there, the Bills got a successful two-point conversion when Allen completed a pass to Cole Beasley. It was the first time in franchise history – 903 regular-season games -- the Bills have ever held an 8-0 lead in a game. When Stephen Hauschka added a 34-yard field goal in the second quarter, it marked the first 11-0 lead in franchise history, too.

4. Rookie running back Devin Singletary missed the first game of his NFL career Sunday. That led to more playing time for third-string running back T.J. Yeldon.

He finished with 30 yards on eight carries and added two catches for 19 yards. His afternoon will mostly be remembered for a lost fumble in the second quarter. With the Bills inside the red zone, Yeldon coughed up the ball when he was hit by Bengals defensive end Sam Hubbard. Former Bills linebacker Preston Brown recovered for Cincinnati.

Brown finished with four tackles for the Bengals in his first regular season game back in Buffalo.

“It was a little weird,” he said. “Seeing some of the things you saw for four straight years, it was fun to come back and see some of the old guys and people working in the building.”

With only two running backs active, the Bills stuck with Yeldon even after his fumble. He got a carry inside the Bengals’ 10-yard line just before the two-minute warning in the fourth quarter. That came just two plays before Frank Gore’s go-ahead touchdown.

5. Nickel cornerback Taron Johnson missed his second straight game with a hamstring injury. Siran Neal again filled in for Johnson, finishing with four tackles, including one for a loss.

6. How windy was it Sunday at New Era Field? Windy enough that Bills kicker Stephen Hauschka attempted a 62-yard field goal late in the second quarter, kicking toward the tunnel end. Hauschka’s attempt came up just short, although it would have missed wide left even if it was long enough. Had he made it, Hauschka would have broken Steve Christie’s record for longest field goal in team history. Christie hit a 59-yarder against Miami in 1993.

7. Bengals rookie quarterback Jake Dolegala, a Hamburg native and St. Francis High School graduate, was inactive against his hometown team. Dolegala has been inactive for each of the Bengals’ first three weeks, but Cincinnati coach Zac Taylor is excited about Dolegala’s potential.

“Big kid, strong arm. Has really processed well. He had two opportunities in (preseason) games and really did a nice job to the point where he really made the team because of his performances there and we didn't want him to escape us and go somewhere else,” Taylor said in a conference call with the Western New York media last week. “He's done everything we've asked of him. He helps on the scout team right now. He’s just one of those young, developmental guys who we think highly of and we want to make sure he stays in the organization.”

At 3-0, Bills look forward to seeing how they measure up vs. Patriots