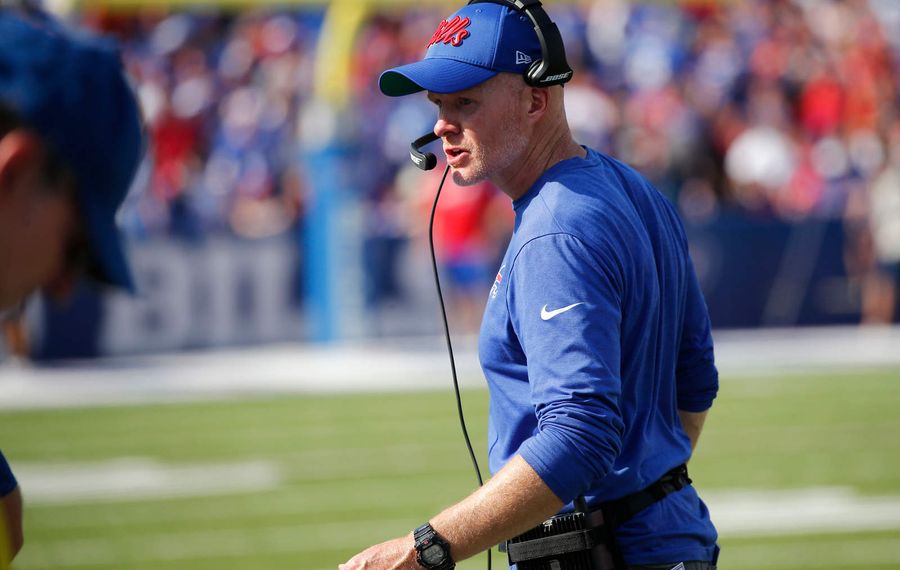 The Bills managed Devin Singletary’s absence well. Frank Gore bulldozed his way to 76 yards on 14 attempts — a healthy average of 5.4 yards per rush that was aided by a long gain of 22 yards. That’s impressive stuff for a 36-year-old. T.J. Yeldon saw an expanded role with Singletary out, gaining 30 yards on eight carries. His lost fumble inside the red zone cost the Bills an "A" grade here. Quarterback Josh Allen scrambled his way to 46 yards on nine attempts. He once again took more big hits than the team would prefer, but his ability to make something happen on the ground when a play breaks down is huge for the offense. Receivers Isaiah McKenzie and John Brown combined for four carries, but were only able to produce 14 yards on those plays.

The Bills’ pass protection around Allen was atrocious. Allen rarely had enough time to make plays from the pocket. Cody Ford is having a tough time dealing with edge rushers when he's at right tackle. Allen's interception was inexcusable. At this point, it seems like that maddening tendency to heave the ball into the middle of the field in the face of pressure just can’t be coached out of his game. He’ll make some incredible plays, but then some that leave you asking “what was he thinking?” That was the bad news. The good news is Allen again completed 64 percent of his passes, which is where he stands for the season. That’s a huge improvement. Slot receiver Cole Beasley showed good hands, making eight catches for 48 yards on 10 targets. John Brown added 51 yards on four catches. The X-factor in the passing game was rookie tight end Dawson Knox, who made three catches for 67 yards. His 49-yard reception in the fourth quarter will be on the team’s season highlight reel. Knox also caught his first career touchdown in the first quarter. Yeldon and Gore combined to make four catches out of the backfield for 32 yards. Robert Foster continues to be invisible. He was targeted once on a deep ball that Allen was lucky not to have intercepted.

The Bengals entered the game with the worst rushing attack in the NFL, so it was expected that the Bills would shut them down. That happened in the first half, as Cincinnati managed just 21 yards on the ground. The Bengals did find a little more success in the second half, but still finished the game with just 67 yards on 19 carries. Tremaine Edmunds finished with just three tackles, but one of them went for a loss. Safety Jordan Poyer was active in run support, leading the team with 11 tackles. Jordan Phillips played a strong game. He dropped Bengals running back Joe Mixon for a loss on the last play of the third quarter. Safety Micah Hyde came flying off the edge to drop Mixon for a loss of 2 yards in the fourth quarter. Cornerback Tre’Davious White also added a tackle for a loss as the secondary showed up in the run game.

The first half couldn’t have been much better. Bengals quarterback Andy Dalton finished with 64 passing yards, but 33 of them came on the final play of the half, which the Bills were fine with giving up in exchange for time running out. The pass defense gave up more yardage in the second half, but made up for it by forcing turnovers. White had a pair of interceptions, including one to seal the victory in the fourth quarter, for the first multi-interception game of his career. The team had eight passes defensed, bringing their season total to 25. That’s just one less than New England for the NFL lead. Hyde forced a fumble by Bengals receiver John Ross that was recovered by Matt Milano. Hyde also got a hand on the pass that ended with White’s game-clinching interception. The Bills have gone 30 consecutive games without allowing a 50-yard completion, the longest streak in the NFL.

Andre Roberts saw his first action of the season, but wasn’t able to find much room. He returned one kick 23 yards and three punts for a total of 4 yards. He also made two fair catches. Roberts appeared frustrated at times that his blocking did not hold up for a little more time, giving him the chance to find a running lane. Punter Corey Bojorquez placed three of his five punts inside the 20-yard line, but it was not a particularly impressive showing. On a couple of those, Bojorquez was punting from near midfield and needed to get the ball closer to the Bengals’ end zone. If it bounces in, oh well, but it’s better than allowing fair catches at the 18- or 19-yard line, which he did twice. The kick coverage caught a huge break when the Bengals were flagged for holding in the first quarter, negating a 92-yard touchdown by Darius Phillips. Otherwise, both coverage units were strong. Stephen Hauschka made two of three field goals, but gets a pass on the one he missed, because the attempt came from 62 yards away.

Sean McDermott stepped out of his comfort zone by going for a two-point conversion in the first half. The play worked, so it was a great call — albeit one that was out of character. Offensive coordinator Brian Daboll used a ton of misdirection, with receivers frequently in motion or threatening jet sweeps. Daboll needs to try hypnosis or something to get Allen to stop making those desperation heaves to the middle of the field. One area of concern: Two weeks in a row, the team has sleep-walked through the third quarter. McDermott and Co. need to do a better job of making halftime adjustments going forward. The Bills have not challenged a play through the first three weeks of the season. There was a wasted timeout in the second half, which could have ended up being costly. The pre-snap penalties were kept to a minimum.