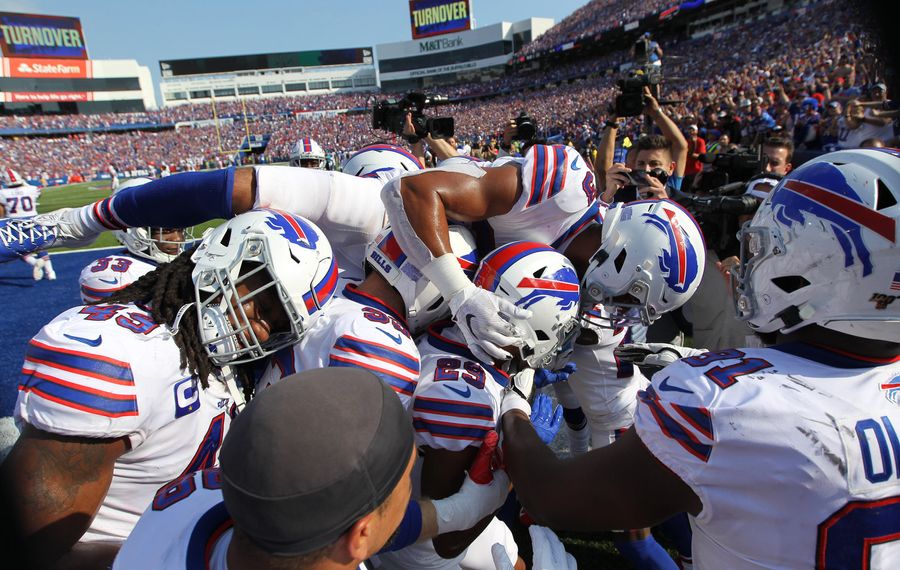 Jerry Hughes was in middle school when he witnessed the beginning of the legend of Tom Brady.

Feb. 3, 2002. Super Bowl XXXVI. Hughes was among the millions watching in awe as then-24-year-old Brady led a comeback that gave the New England Patriots a 20-17 victory against the St. Louis Rams. It was the finishing touch to the opening chapter of one of the most amazing stories in the history of sports.

"Surprisingly enough, we were cheering for him at that time," Hughes said Sunday. "We just didn't want to see the Rams win another one" after beating the Tennessee Titans in Super Bowl XXXIV.

It's fair to say a whole lot of people, especially fans of the Buffalo Bills, become downright nauseated at the mere thought of Patriots winning "another one" after the six Lombardi trophies they've piled up since the 2001 season.

In his 10th NFL season and seventh with the Bills, Hughes has had a much closer view of the Patriots' dominance, which is alive and well through their 3-0 start. The difference now, however, is that the defensive end is also part of a 3-0 team. And in a week, his Bills will face their AFC East nemesis at New Era Field.

Hughes and his teammates had just beaten the winless Cincinnati Bengals, 21-17. They struggled far more than expected, but got the win that was quickly pushed into the past.

It's time to look toward the most anticipated game of the early schedule. It's time to see how these new and improved Bills, with 10 returning starters on a defense that has had mostly good moments but also some missteps like those that could have proved costly against the 0-3 Bengals, can do against the NFL's greatest quarterback.

At 42, Brady looks as dangerous as ever.

"It's amazing what he does, how he's able to keep his body, his mind sharp for this long," Hughes said. "But we understand that team starts and stops with him. So, up front, it'll be a great task for us to kind of measure ourselves against a great organization like the Patriots to see how we match up, how we can go out there and play our Buffalo Bills style of football."

That style had better not include turning the ball over, as the Bills did twice Sunday, or leaving big gaps in the secondary that can be exploited for long gains. Andy Dalton was far from great, but the Bengals' quarterback took advantage of enough blunders to lead his team back from a 14-0 halftime deficit to a 17-14 lead late in the fourth quarter.

Brady practically does that on a regular basis with his eyes closed.

The Bills aren't kidding themselves about the imperfections within their perfect start. Josh Allen, who threw one of the uglier interceptions of his 14 NFL starts before leading his fifth career game-winning drive, needs to play better. The offense, as a whole, needs to show improvement, especially against a New England defense that has yet to allow a defensive touchdown this season. And despite getting three turnovers, including Tre'Davious White's interception to seal the outcome with 12 seconds left, the defense must step up its performance.

Beating Brady and the Patriots requires a whole lot more than good. It demands great.

"Obviously, we got to come in (Monday) and watch the tape and fix our corrections," safety Jordan Poyer said. "It wasn't a perfect game. We could have closed the game out a whole lot earlier. ... But (facing Brady) is a different animal and we've got to prepare and we've got to be ready. We can't make some of the mistakes that we were making (Sunday), or else it'll hurt us."

At the same time the Bengals were putting a scare into the Bills, the Patriots were on the way to a 30-14 win against the New York Jets. Brady threw for 306 yards and two touchdowns, with no interceptions. Thanks to his incredibly quick release, he mostly avoided harassment from the Jets' blitz-happy defense. Brady led the Pats to touchdowns in each of their first three possessions to build a 20-0 halftime lead.

The Patriots have their concerns. They never got a sufficient replacement after the retirement of Western New York native Rob Gronkowski, arguably the greatest tight end to play in the NFL. They cut Antonio Brown, one of the best receivers in the league, after only one game because of his sordid off-field behavior.

Julian Edelman, who had a game-high seven receptions for 62 yards and a touchdown, left Sunday's game early with a chest injury. Josh Gordon, another highly talented target, temporarily exited the field with an injured finger. Fullback James Develin missed the game with a neck injury.

“That’s the NFL, so there’s nobody feeling sorry for anybody out there," Brady told reporters in New England when asked about the injuries. "There’s no teams that are, ‘Man, poor Patriots.’ No one feels sorry for us; we don’t feel sorry for them. It’s just, we’ve got to go out there and try to win a game. Certainly, 3-0 is a good feeling, but you don’t really get anything for three wins. We’ve got to do a lot more than this.”

The injuries and changes on the Patriots won't matter all that much to the Bills during their preparation. As long as Brady is still behind center, they know there's no cause for even the slightest bit of comfort.

"He puts the ball in places where sometimes only his receivers can catch it," Poyer said. "We might not have the tipped balls, but at the same time, we're going to have to be able to make plays when they're there to be made. It's going to be a tough task for us."

Hughes is banking on another full stadium to do its part.

"If we can get the same energy we had (Sunday), with the fans just filling up the entire arena with juice, just the electric vibe that we had, we can go out there and we can have a lot of fun," he said. "Just because of how we execute on defense, we feed off that crowd energy."

Yes, there could very well be a feeding frenzy. The Patriots have a long history of dining on the Bills' misery, winning five consecutive meetings at 13 of the last 15.

With both teams at 3-0, however, that might not necessarily be a given this time.