Chris Hawley was ready to leave. It was a cloudy November day last year at Holy Cross Cemetery in Lackawanna, and his search of an area near South Park Avenue, a section crowded with small and humble tombstones, had been to no avail.

A friend, Pat McNichol, gave it one last shot. In a quiet graveyard where wandering deer often pause on the trails, McNichol scanned the grass until he shouted in triumph, “Here it is!”

He and Hawley pushed aside some leaves to reveal a flat tombstone, topped by a cross, that at one point probably stood upright until it fell and was almost lost beneath the soil.

They had rediscovered a grave at the absolute heart of the labor movement in Western New York.

Mazurek was "a martyr to the cause of working people," said Richard Lipsitz, president of the Western New York Area Labor Federation, AFL-CIO, who praised Hawley for bringing a spotlight to an anniversary of profound civic meaning.

Lipsitz plans to attend a remembrance ceremony at 5:30 p.m. Monday at Mazurek's grave, an event organized by Hawley for the 100th anniversary of the day Mazurek was shot and killed by steel plant police. To labor activists, it has particular resonance at a time when 46,000 members of the United Auto Workers are on strike nationally against General Motors, a moment when the digital world increasingly blurs the lines between when work begins and ends.

Mazurek was a World War I veteran, not long home from military service. Newspapers said he was one of two men killed locally amid the "great steel strike of 1919," when guards opened fire on a crowd of thousands - including women and children - gathered outside what is known as "three gate" at the old Lackawanna Steel Company, predecessor to Bethlehem Steel.

A funeral procession of 7,000 to 10,000 mourners, led by war veterans from the American Legion, marched to Holy Cross for Mazurek's burial, where his weeping mother had to be gently guided away from his grave.

The company eventually gave her a one-time payment of $5,000 as a settlement – the equivalent of about $65,000 today.

“His death was a flashpoint,” said Hawley, a student of community history and founder of Buffalo’s Eugene V. Debs Local Initiative, which seeks to chronicle pivotal moments and landmarks within the regional labor movement. 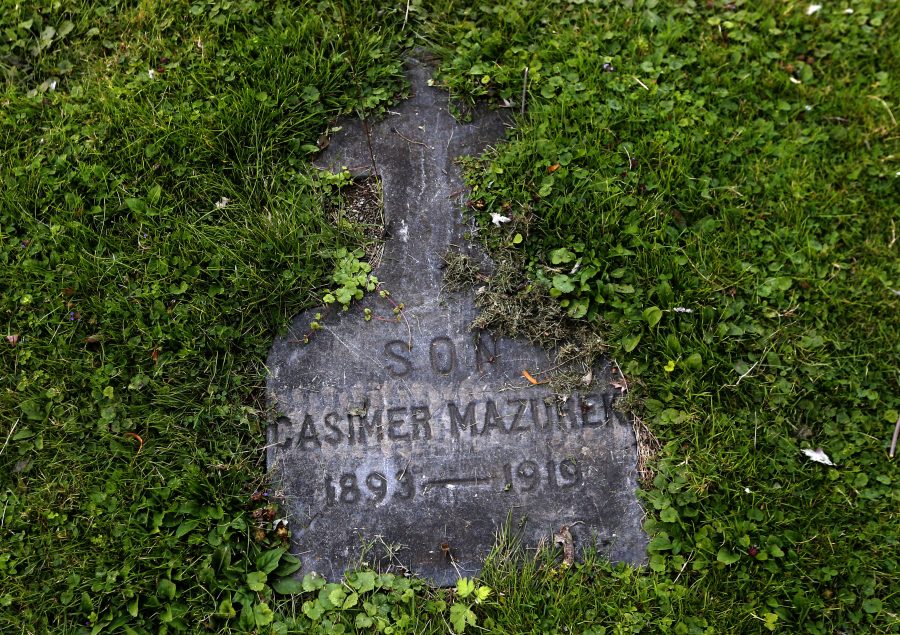 In 1919, thousands of steelworkers in Lackawanna, many born in Poland and Eastern Europe, walked off the job as part of a national strike. Don Williams, president of the Steel Plant Museum of Western New York, said 12-hour shifts and seven-day work weeks were routine at the time.

Alex Blair, adjunct professor of labor history at Erie Community College, has studied the strike, and what happened at the gate. He said exhausted workers were dealing with molten steel amid virtually no safety regulations, for low pay. For some workers, the way those shifts alternated meant they sometimes worked 24 hours in a row.

It was all too easy to be killed or maimed, with nothing to protect your family afterward.

Yet many company officials described the grievances as part of a sinister Bolshevik conspiracy, brought into unsuspecting American communities by impoverished immigrants. There were fistfights and stone-throwing along the picket line, especially when the company tried to use replacement workers, called “scabs” by those on the line.

Arthur Heiser, a witness who offered a sworn statement on the shooting, said someone hurled "several bricks" toward two armed guards about 100 feet away.

"At this time, six private policemen rushed from inside No. 3 out into Hamburg Turnpike and arrayed themselves in a line in front of the crowd," Heiser said. "Without provocation and without themselves being molested, they fired their revolvers point blank into the crowd."

Mazurek was killed. Another worker whose story Hawley plans to research, Maciecz Buczkowski, 38, died shortly afterward. A 3-year-old child, Frank Werlack, was shot through the groin but survived.

While the strike was eventually broken, Blair said the bitter memory simmered for years in greater Buffalo, until workers nationally finally achieved such rights as a 40-hour-week. 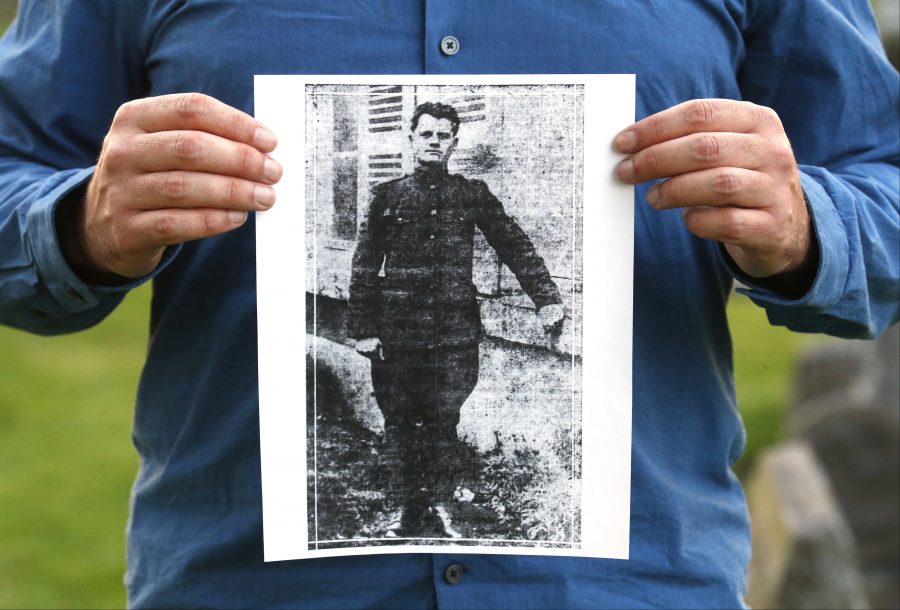 The only image of Casimer Mazurek that Chris Hawley has been able to find. (Robert Kirkham/Buffalo News)

Over the last 60 or 70 years – though the Steel Plant Museum has a new exhibit on the strike – the sacrifice at "three gate" was gradually forgotten.

"In general, it's something we don't talk about and we don't teach about, and I think that's because we don't tell stories anymore," Blair said. "We don't sit at the dinner table and tell these stories to our children, but these stories are the way we remember who we are."

Lipsitz - while he knew there was violence in the 1919 strike - said he had never heard specifically of Mazurek's tale until Hawley brought it to his attention, and the labor federation now intends to hold a remembrance of its own this autumn. Lipsitz describes it as "an amazing story" that underlines the cost of victories that should never be taken for granted.

Hawley said he was stunned when his research led him to the shooting. The descendants of steelworkers, he has a deep interest in civic heritage, and it troubles him that much of the historic focus in Buffalo is far more often on the mansions, monuments and family narratives of the wealthy.

The tale at the soul of this community, he said, is the way everyday laborers – often immigrants, arriving here with nothing – worked selflessly in the plants and furnaces of Western New York, sometimes dying from conditions too savage to endure.

It is important, Hawley said, “to chronicle the great struggle and sacrifice made by working people for basic dignity and respect." 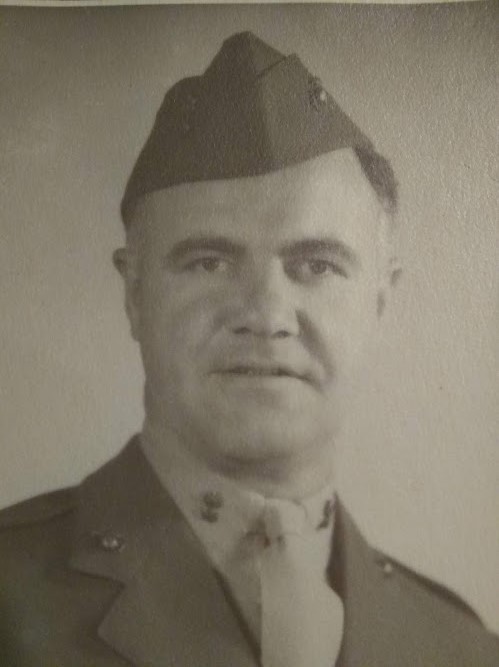 Norman Mazurek: While his son's Norman middle name may have come from his brother, the career Marine never told his son about that brother, Casimer Mazurek, or the way he died. (Family photo)

As for Mazurek, Hawley could find little trace of relatives in civic records. A connection happened only with the help of Megan Smolenyak, a nationally renowned genealogist and researcher.

She discovered that Casimer Mazurek was born in Zaklikow, in Poland. His father emigrated in 1906 to upstate New York, followed six years later by Casimer's mother, Julia, and her four children.

Smolenyak found a record showing that another of Julia's sons, Roman, went to the morgue after Casimer died and picked up his brother’s things – a watch and chain, some cufflinks, a knife, a fountain pen, a book and papers.

By 1920, Smolenyak learned, Casimer's parents had split up, and his mother eventually moved away. Roman changed his name to Norman and joined the Marine Corps. His family included a son, also named Norman, who spent a career in the Air Force before retiring in Massachusetts. 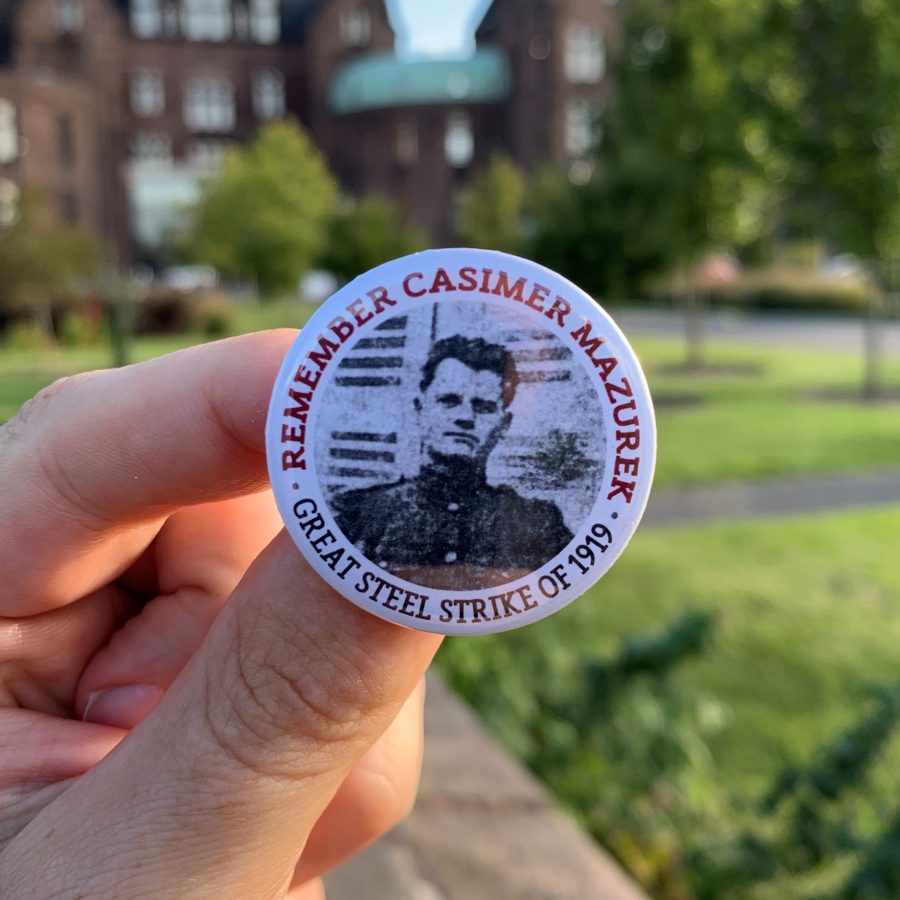 Now in his 80s, the younger Norman retains a fierce interest in family history. A few weeks ago, I called to ask what he knew of his uncle, a World War I veteran shot and killed outside a steel plant.

While his middle name is Charles, which the family sometimes used for Casimer Mazurek, Norman does not know if he was named after his uncle. His father and grandmother never told him about Casimer, or about the tombstone that almost sank into the Earth.

Norman always sensed there was something of importance they held back.

“It just preyed on me,” he said, “to find out more about the Polish side of my family.”

While reading the old clippings this month left him with deep pride in his uncle, he was upset to learn no one ever went to prison for the killings. 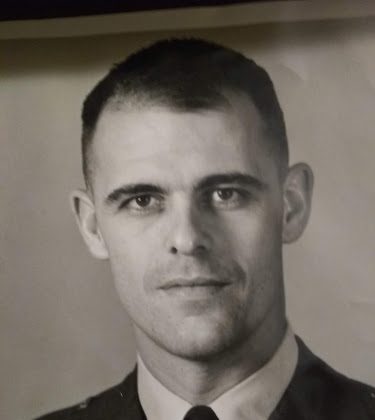 Norm Mazurek, while in the Air Force: Sending flowers to his uncle's grave. (Family photo)

“I didn’t believe what I was reading,” he said. “You come home from war and you’re standing there and you get shot?”

Norman suspects his uncle’s death “blew everything apart” for Casimer's parents and caused lasting family wounds, and that his own father never spoke of it because of raw pain. While Norman ordered flowers to be set at Casimer's grave, his wife, Betty, is experiencing some health problems, and they will not be able to attend Monday’s gathering at Holy Cross.

Hawley, in turn, makes this promise.

A century after thousands of mourners saw Norman's uncle laid to rest, an honor guard from VFW Post 1419 will sound taps for Casimer Mazurek, a hero of lasting steel in Lackawanna.

Sean Kirst is a columnist with The Buffalo News. Contact him at skirst@buffnews.com or read more of his work in this archive.