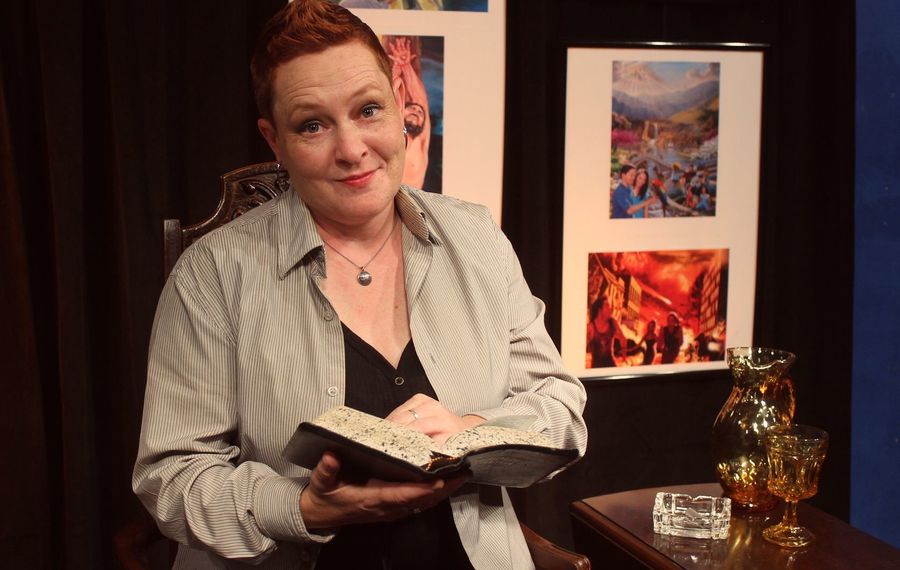 For many people, their religious upbringing will always be a crucial part of who they are—no matter how religious they may be. And while religion sometimes brings people together, it can also tear them apart.

Heather Fangsrud’s “Knock Knock, Jesus Calling” explores how one gay woman’s story is shaped by having grown up as a Jehovah’s Witness. Written by Fangrsud, directed by Lara D. Haberberger and presented by Brazen-Faced Varlets, the play is a (mostly) one-woman tour de force, in which Fangsrud speaks her emotional narrative directly to the audience seated intimately around her.

Fangsrud’s story is compellingly presented in a single act. She combines an exploration of her past with a description of Jehovah’s Witnesses (or “J-Dubs,” as she affectionately calls the culture she now sees as a “cult”).

Audience members learn fascinating, insider details about Witnesses’ practices and beliefs, ranging from their rationale for not celebrating birthdays or accepting blood transfusions to their tendency to be understanding when people politely refuse their missionary efforts. Fangsrud’s story becomes especially painful when she talks about practices of exclusion — particularly, the efforts to exclude those who do not conform to Witnesses’ moral expectations, which left the gay Fangsrud often stressed and alienated.

I say that it is a “mostly” one-woman performance because assistant director and stage manager Stefanie Warnick also plays a part in the proceedings. Fangsrud occasionally checks in with Warnick with questions about where she is in the script or what she should do next, with Warnick gamely offering terse advice or apologizing for missing props or special effects.

Such breaking of the fourth wall helps relieve some of the tension of a sometimes deeply painful story. An excellent storyteller, Fangsrud tells many anecdotes that charm and delight, but her narrative sometimes threatens to become oppressively dark when she moves to such subjects as suicidal depression and familial rejection. By inserting absurd asides about her own acting as if she is reading from a script, Fangsrud smartly lightens the overall mood — and reminds us that we are in the safe space of theater.

I call theater a safe space here, because theatrical magic becomes central to Fangsrud’s narrative of thriving despite painful life challenges. Fangsrud explains how theater rescued her, allowing her to experience the wonder of bringing joy to others by being someone else.

In an especially powerful scene, Fangsrud passionately describes her favorite role — playing Puck in William Shakespeare’s "A Midsummer Night’s Dream." We share Fangsrud’s joy as she recalls wowing audiences with the wild energy of a fairy who brings them both chaos and delight.

Shakespeare’s impact on Fangsrud’s life is made clear in the wonderful stage design. Prominently displayed among other books, a Shakespeare volume stares out at us throughout the play. Although our eyes might be drawn to the images of Jehovah’s Witness life elsewhere on stage—such as the painting where a fiery apocalypse contrasts with a kitschy paradise where happy Witnesses coexist with lions and pandas, or the one where perfect Witnesses sit in space on armchairs while Jesus scans the Earth — we learn that it is Shakespeare and theater that get the last word in Fangsrud’s story.

Even though Jehovah’s Witness culture still shapes her, Fangsrud says, she knows that her true life is with her “found family” of fellow theater-folk. Channeling Puck’s fairy spirit in the show’s final words, Fangsrud shows how theater’s magic lets one thrive despite a painful past.