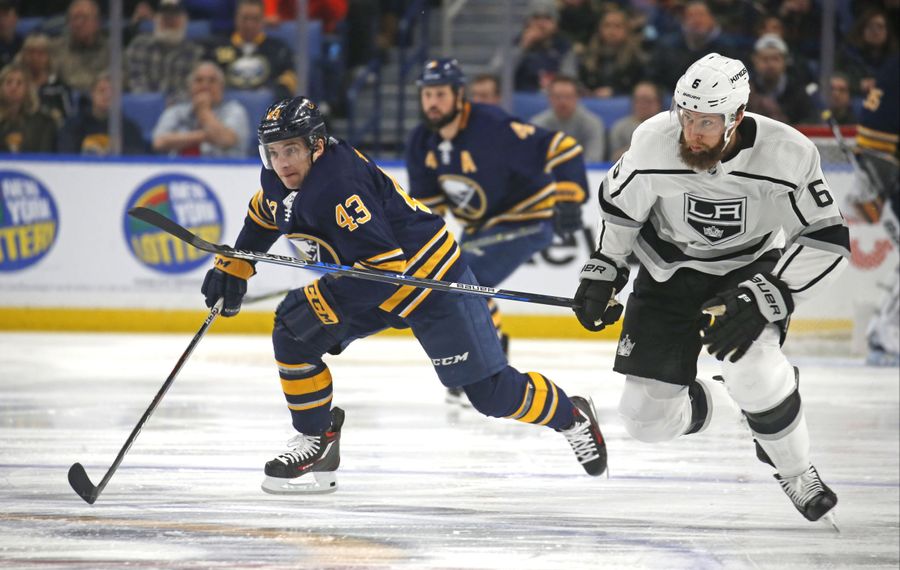 Conor Sheary could sense his Buffalo Sabres teammates were looking to him when their playoff chances were slipping away last season. The winger is a proven scorer in the National Hockey League, then only one season removed from a career-high 23 goals with the Pittsburgh Penguins.

Sheary, who turned 27 in June, was also the only player on the Sabres' roster in 2018-19 to hoist the Stanley Cup, and he accomplished the feat in back-to-back seasons. Yet, he was in an unfamiliar position during last season's second-half collapse in Buffalo.

There was self-induced pressure to help put a stop to the losing. Rather than using his quick burst to strip pucks and score goals, Sheary was hesitant. The result was a difficult stretch in which he scored only one goal in 28 games. Sheary said he's fueled by "self-criticism" during his second training camp with the team.

Sheary knows precisely how he needs to make the sort of impact he did in Pittsburgh, where he scored 48 regular-season goals over a three-year span. He's not trying to be a superstar in Buffalo. Instead, Sheary is focused on being an effective, consistent complementary player under new coach Ralph Krueger.

"Early on I had that fast start and guys immediately start to look at you for goals and points," Sheary, who was acquired from the Penguins in June 2018, told The Buffalo News. "I’ve never been a superstar in this league, so I don’t know what it’s like to be Jack [Eichel], [Jeff Skinner] or [Sam Reinhart]. But I think if I can contribute in the second tier, and if I can bring those second-tier goals it will be important. I just have to stick to my game."

Sheary made an immediate impact during his first season with the Sabres, scoring six goals in the team's first 16 games. However, he followed that with the difficult lull. To be fair, few players were producing for Buffalo during its second-half struggles. Even Skinner had a difficult stretch during his career-high 40-goal season.

Sheary was more concerned with how he was playing. His speed helped him score four goals among 10 points as a rookie during the Penguins' first Stanley Cup victory in 2016. In Buffalo, Sheary was pressing during the second half, which prevented him from closing on opponents defensively or evading a defenseman in the offensive zone.

There were promising moments in the season's second half, though. Sheary had 14 points during a 21-game stretch and although he had two goals in the team's final 17 games, he averaged more than two shots per game during that span. Sheary finished with 14 goals among 34 points.

"I think I got away from my own game," Sheary explained. "I tried to do too much. When you go through a couple games it turns into four or five because you’re trying to do things differently. If I could consistenly stay the same and know what I do works, I think that will help this year."

Sheary is also showing an ability to contribute no matter which line he plays on. He made a perfect outlet pass to set up Eichel's game-winning goal with eight seconds remaining in overtime Monday against Pittsburgh at Penn State and had an outstanding game on a line with Dylan Cozens and Arttu Ruotsalainen Friday in Toronto.

Although Sheary did not record a point or a shot on goal, he made several outstanding passes to set up scoring chances and used his speed to make an impact defensively. Sheary can also play left or right wing.

“He had a big impact on the first game, I thought, with the goal and then the play to Jack in overtime," Krueger said prior to the game Friday in Toronto. "It might have looked easy from above, but you know the clock’s ticking down, you’ve got 10 seconds to go, you’ve got to make that pass and overall, he showed the ability to play on different sides. I think he definitely can play left or right side. He seems to be a player who will add value to any line he’s on, but he gives us an interesting game.”

Sheary will also be counted on for leadership. He is among the several players with playoff experience acquired by the Sabres since General Manager Jason Botterill's arrival. The Sabres' young core has a deep respect for Sheary.

Sheary, though, was unsure how to impart his wisdom on the Sabres last season. He needed some time to create chemistry with teammates and to know when he could speak up. The season gave Sheary with a lesson on how a team should manage the emotions of a losing streak and how to encourage young players during a time of adversity.

The first two weeks of preseason games have not provided a clear picture of where Sheary will play when the season begins. The Sabres are comfortable with him playing in the top- or bottom-six. Regardless of who he plays with, Sheary is determined to be relentless with and without the puck every game.

"I want to be effective wherever I am in the lineup," Sheary, who is scheduled to be an unrestricted free agent next summer, said. "People might recognize you a little bit more when you’re playing with a superstar like [Eichel]. People take notice. I think my game stays pretty consistent no matter where I am in the lineup. I try to use my speed, I try to use my quickness. I try to get open for those guys and a lot of times they can find you. Hopefully this year if I have that opportunity I’ll take advantage of it and help us win."