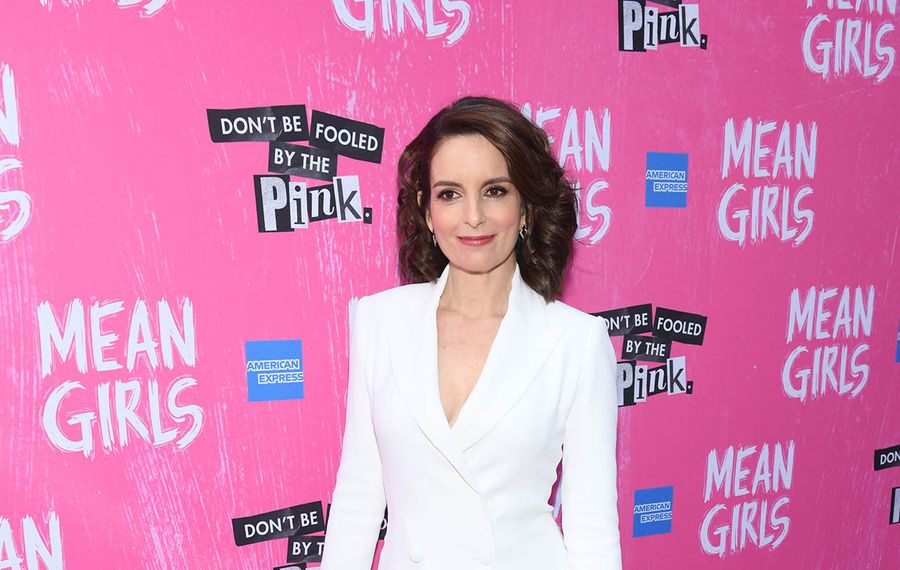 There are three tall chairs in this room, and that’s a problem, because there are five people. That’s four Broadway producers and one interviewer. Who’s getting a seat? Who’s crouching in a corner?

This is like trying to find the right seat in high school cafeteria. Who can you sit with? Where do you belong?

But then Tina Fey steps in. She’s in Buffalo, along with a director, a lyricist and a composer – to whom she also happens to be married – to premiere the national tour of the musical she wrote, “Mean Girls.”

Fey and her colleagues are here in this backstage room at Shea’s Performing Arts Center to do an interview promoting the show, which begins a seven-day stay in Buffalo on Saturday. We’ve got a half-hour to talk, and then they’re heading to a full-cast rehearsal. But first we need to figure out where to sit, and for a few moments that feel like an hour, nobody budges.

Until Fey climbs onto the chairs and lies down on her side. She uses her right hand to prop up her head and flashes a red-carpet smile, one that’s subtle and knowing, as if to say, “You know I got this.” 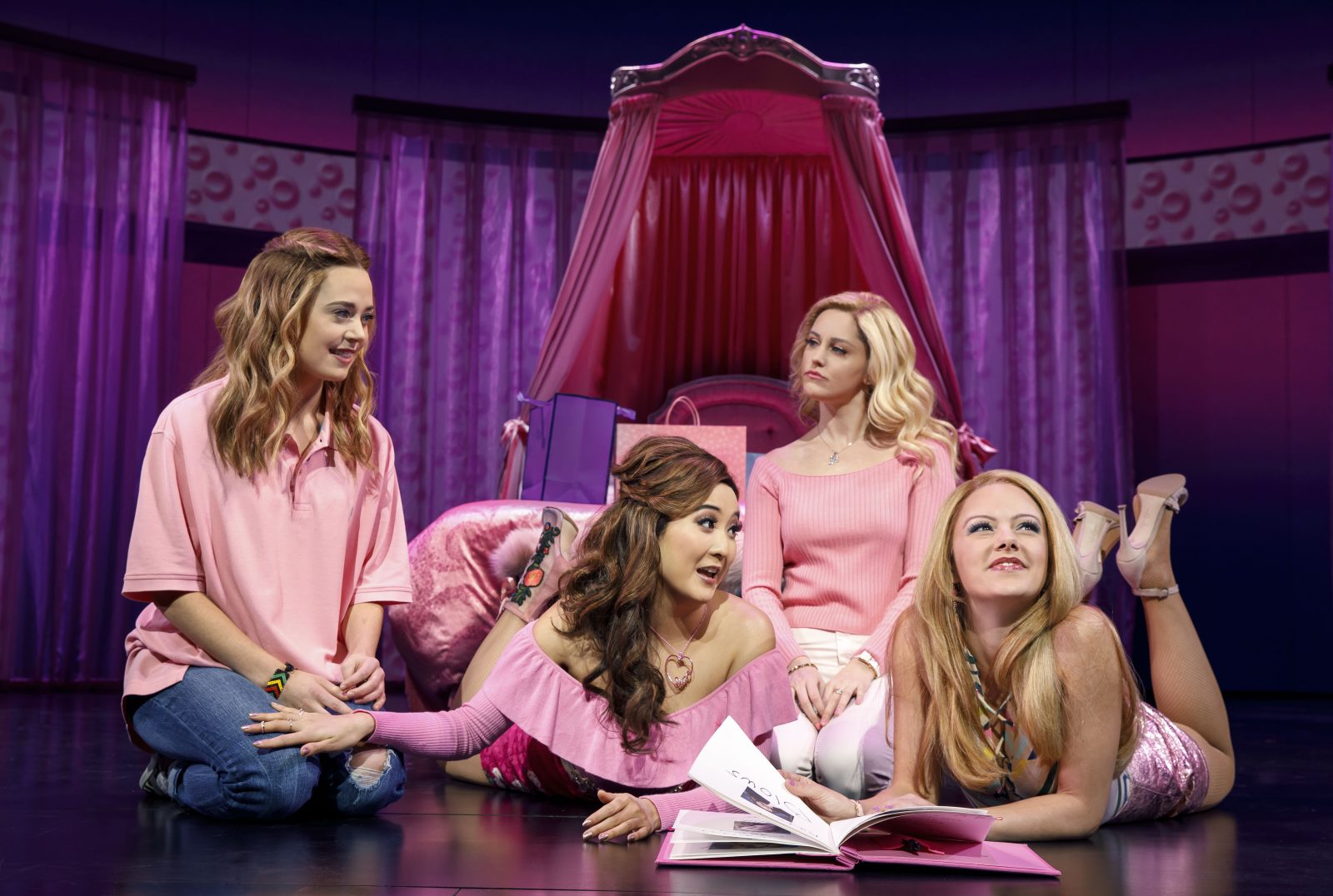 You can tell Fey – she of “Saturday Night Live” and “30 Rock” fame – has done this before. The other people in the room crack up at this imitation of a photo shoot, and then seem to notice something that was there all along: a couch for three. Fey settles onto it along with her husband Jeff Richmond, who is the composer of the show, and Casey Nicholaw, the director. Nell Benjamin, the lyricist who wrote the songs with Richmond, sits in an upholstered chair. The guy doing the interview pulls up a plastic chair and faces the foursome who, without intending it, provided a tiny window into the essence of their show.

“Mean Girls,” which Fey wrote based on the book “Queen Bees & Wannabes” by Rosalind Wiseman, was released as a movie in 2004. (A sequel followed seven years later.) It tells the story of a teenage girl, Cady Heron, who spent most of her childhood in Africa until her scientist parents move her back to the United States. Cady tries hard to fit into the cliquey social scene of her new high school, and ends up entangled with the popular girls who keep a “Burn Book” loaded with rumors and gossip about other kids. “Mean Girls” became a pop-culture fixture and spawned a series of quotes and references – for example, the word “fetch,” which means “cool” – that are instantly recognizable to a generation of fans.

Fey’s intent with the story was, and remains, noble.

“I always figured if we could get people to recognize their crappy behavior by laughing at it, that might be an easy way – a palatable way – to encourage them to not do it,” she said.

The stage version of “Mean Girls” debuted on Broadway in 2018. Some of the story mechanisms have changed in the 15 years since the film was made. Social media, for example, barely existed then, but is part of the musical. But the themes remain relatable, and perhaps more broadly relevant. Which isn’t a good thing.

“I think in some ways, the behavior that when the movie came out was identified as a particularly female behavior – relational aggression – has metastasized to boys, to adults,” said Fey, who has daughters ages 8 and 14 with Richmond. “And you can blame social media, whatever, but I feel like in some ways people are getting worse and worse about punching down in order to feel better about themselves.”

The other three producers murmured in agreement.

“Cliques are now tribes,” said Richmond, who sat on the opposite end of the coach. “That’s how it’s metastasized.”

“It’s not just mean girls,” added Benjamin, the lyricist. “It’s about what happens when, instead of being open and honest and accepting, you take back doorways to make other people miserable.” 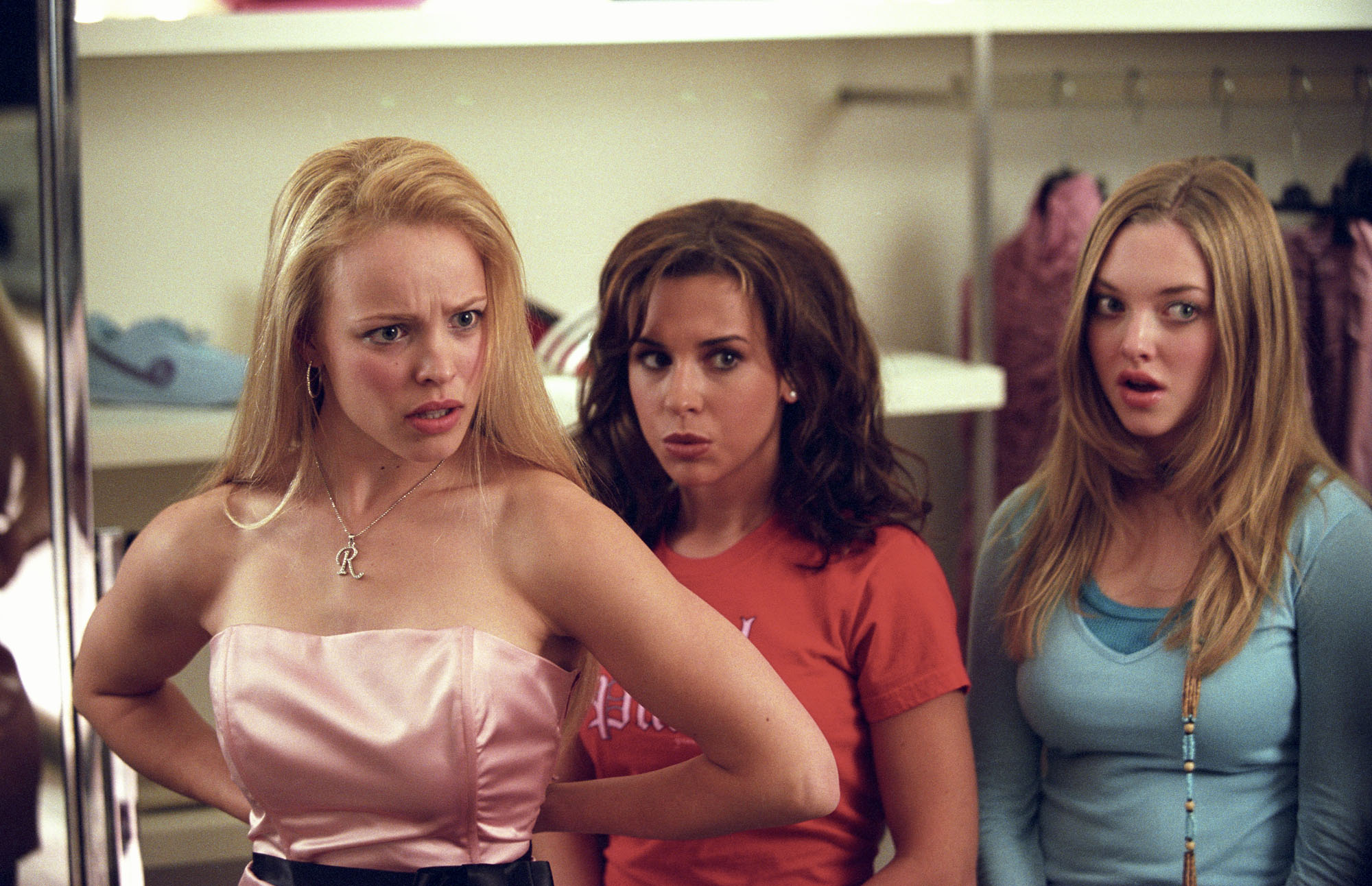 Rachel McAdams as Regina, Lacey Chabert as Gretchen and Amanda Seyfried as Karen in the film version of "Mean Girls." (Photo by Michael Gibson)

“I also think we take our high school stuff with us into adulthood,” Nicholaw said. “We all sort of know how we felt at that time when you wanted to badly to fit in, and it ended up backfiring on you, because you weren’t true to yourself…

“They still scar you now.”

The “Mean Girls” protagonist Cady, who is played on tour by Danielle Wade, gives in to peer pressure in an effort to fit in with the “Plastics,” the mean-but-popular girls in her school. Most people can relate to that choice. When “Queen Bees” author Wiseman held a workshop for the Broadway cast of the show, she asked them to close their eyes and raise their hands if they ever said something bad about someone behind their back.

“They’re very true things,” said Jonalyn Saxer, who was in that workshop as part of the Broadway ensemble and is playing a lead (Karen, one of the Plastics, on tour). “This experience that we go through in high school, and that everyone goes through of not knowing who they are, or where they fit in … Even think of when you go into a new job, it’s kind of like you’re Cady coming into a new high school. We all go through these moments.”

Not all of those moments are about bad choices or bullying. Some of them are more introspective and innocent, like not knowing how to talk to someone, or what your proper place is in a group, or even a room. It’s what happened for a flickering moment at the top of our interview. It’s also what may happen for the next couple of days, when admirers just might spot Fey around Buffalo. (She and Richmond arrived here Wednesday to make final preparations on the show, and they are staying until Monday.)

“I’m not in the show,” said Fey, who played a teacher in the movie, “so I’m just going to be roaming the restaurants and bars of Buffalo.”

She’s joking — mostly. Fey and Richmond do have some familiarity with Buffalo, because Richmond’s sister lives in the area.

“So you may see her,” Richmond said of his wife.

“You may see me,” Fey repeated. They have a knack for mirroring each other’s words.

Richmond mentioned they were in the Swan Street Diner this week and took some pictures with fans.

“Don’t be shy to say hello to Tina,” Richmond added.

Maybe you can even fetch her a chair. Or three.