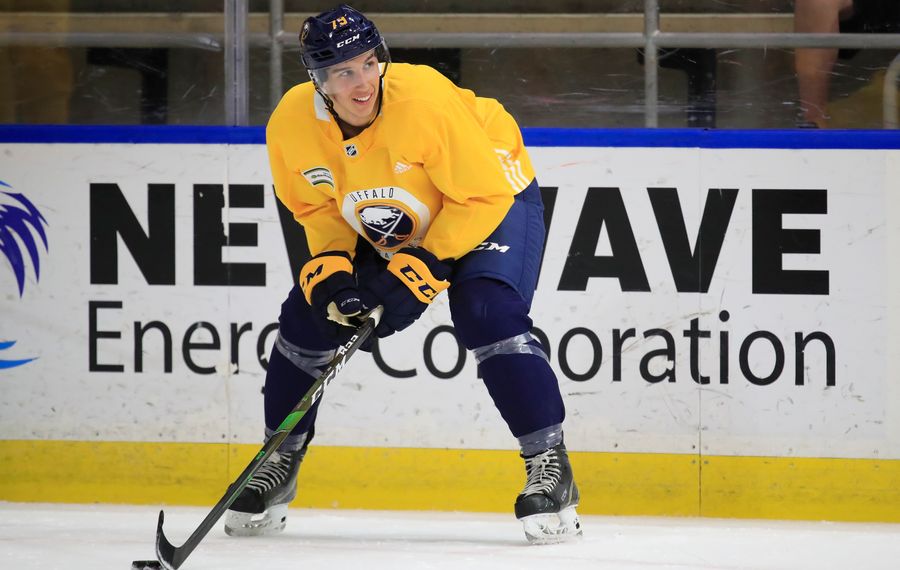 TORONTO – As training camp narratives go, this one is getting pretty interesting. Dylan Cozens looks every bit the part of a first-round draft pick – and isn't remotely looking like an 18-year-old.

In the Buffalo Sabres' otherwise nondescript 3-0 preseason loss to the Toronto Maple Leafs Friday night in Scotiabank Arena, Cozens put up a strong showing in his first game in an NHL arena while playing against a Toronto lineup that included the likes of elite forwards Auston Matthews and William Nylander.

"It's interesting how somebody with that much skill and personality is able to adjust in such a short period of time," said coach Ralph Krueger. "He started camp a little tentative and hesitant, and the last few days we noticed it already in practice that he was opening up a little bit and just playing his game. Tonight, we saw a confirmation of that and what his ability is. The speed and some of the situations were exciting for us to watch."

Cozens, who didn't look out of place in the preseason opener against Pittsburgh Monday at Penn State, didn't register a point Friday but he had three shots on goal in the game and showed excellent body control with the puck both in the offensive zone and neutral zone. That was especially true in one first-period sequence where he got himself out of trouble by the Buffalo bench by keeping the puck out of the middle of the ice and getting it to the Sabres defense.

"Every day I'm getting more comfortable with the puck and making plays," Cozens said. "I didn't want to turn the puck over there. I wasn't seeing much so I just held on to it, turned it back and got it to the D."

This is the play i mentioned a couple of minutes. Look at the reach and body position that help him get the puck away from the middle and out of trouble. Mature play. https://t.co/h3xSaT6WVP

"From first game to second, I thought he took a big step," said Conor Sheary, who played on Cozens' wing. "I think tonight he seemed a lot more confident with the puck. Him and I had a little bit of chemistry and were able to find each other a couple of times. You expect that from a young guy, being a little nervous in the first game. Tonight he really settled down and played his game."

Cozens, from the Yukon Territory, was particularly pleased to get a chance to play in one of Canada's hockey meccas.

"They're a team with lots of history," he said. "So to be able to play in that building in front of these fans who are so crazy was an amazing atmosphere.

With junior eligibility left, it remains more likely than not that Cozens could return to Lethbridge of the Western League. But more strong work from Cozens could have the Sabres pondering keeping him for nine games before the first year of his entry-level deal kicks in.

That's especially true if Cozens continues to outplay returnee Casey Mittelstadt, who has struggled mightily at times in his two preseason games to date.

Cozens has played two of Buffalo's three games thus far. If he gets in another one, perhaps Saturday's rematch against the Leafs in KeyBank Center, it would certainly be a sign the Sabres want to get as long a look at him as possible.

"We all know he's a good player. He was drafted where he was for a reason," Sheary said. "We had some chemistry which was good. Hopefully we can build off that and continue to grow. He likes to learn, talks to me a lot and that's a good thing as well."

"I'd be happy to play," Cozens said. "I like playing the game and I love playing at this level. I want to go out and prove myself, try to stick around as long as I can."

The game in brief: The Sabres hit the halfway mark of their preseason schedule as the result left both teams at 1-2. Matthews had an assist on the first Toronto goal and scored the second one, his third of the preseason. Matt Read scored the other midway through the third period. Nylander had a monster game with six shots on goal and 15 attempts. Tage Thompson led Buffalo with four shots on goal.

Interesting contributions: Curtis Lazar had an active game up front for the Sabres with three shots and a team-high five hits.

Net report: Linus Ullmark had another strong showing in goal, stopping 21 of 23 shots for the Sabres while playing two periods. He stopped 18 of 19 shots while playing 30 minutes in Tuesday's loss at Columbus.

Another injury: Veteran Kevin Porter took the morning skate but did not play in the game due to a lower-body injury, believed to have occurred when he blocked a shot during the workout. Rasmus Asplund took Porter's place and the natural center played left wing on a line with Jean-Sebastien Dea in the middle and Lazar on the right side.

The rematch: The teams meet again at 7 Saturday night in the first of two home preseason games for the Sabres. Many of the above scratches on both sides are likely to play in that game. The game will be televised on MSG using the Leafs' Sportsnet announcers.