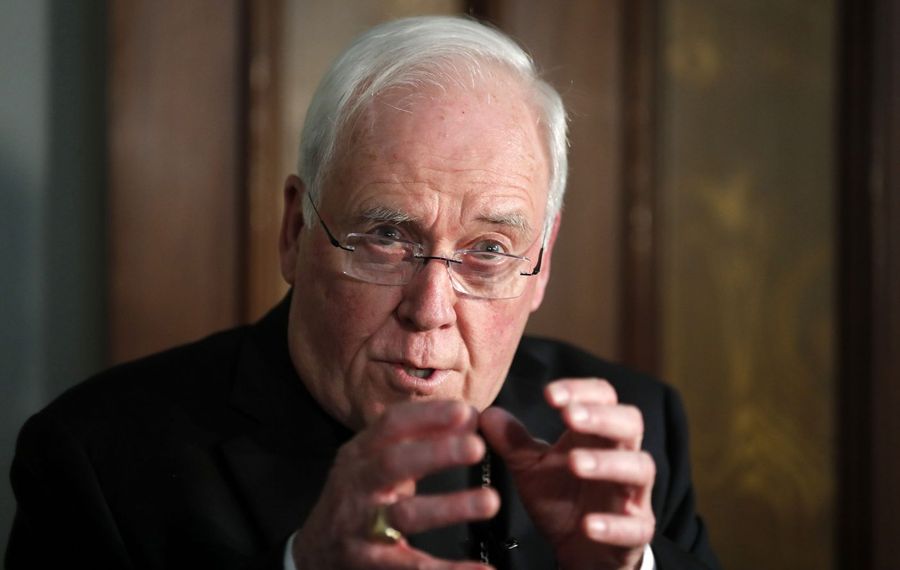 An overwhelming majority of area Catholics or lapsed Catholics want Bishop Richard J. Malone to resign as leader of the Catholic Diocese of Buffalo, a recent poll by The Buffalo News has found.

Nearly 86% of the 473 Erie and Niagara county residents surveyed this weekend said they feel Malone should step down from the post he has held since 2012.

Fewer than 3% of those surveyed said Malone should stay on as bishop. About 12% were undecided.

"The Bishop very much respects area Catholics' right to express their opinion," diocese spokeswoman Kathy Spangler said in response to the results.

The News hired Cornerstone Research & Marketing in North Tonawanda to conduct the telephone survey over the past week. The firm asked the people it polled: "Do you feel Bishop Malone should resign from his duties as bishop of the Diocese of Buffalo?"

Malone, embattled over his handling of complaints of clergy sex abuse and misconduct, for more than a year has resisted calls for his resignation. Those calls intensified in the past two weeks, with the release of private audio recordings that suggest the bishop tried to keep a lid on an alleged sexual harassment by a priest of an adult seminarian and on another priest’s love letter to the seminarian.

The surfacing of the embarrassing recordings was the latest in a series of developments in which the bishop’s public statements on handling clergy sex abuse and misconduct accusations appeared to contradict what he was saying and doing in private.

Malone maintained at a Sept. 4 news conference that although he “hadn’t taken a poll” of local Catholics, he believed the majority stood behind him, despite a child sex abuse scandal that has consumed the diocese since March 2018. The crisis has snowballed to include an investigation by the state Attorney General's Office, an FBI probe including the subpoena of diocese records and more than 130 lawsuits filed against the diocese under the Child Victims Act.

“I’m here because I feel an obligation as the one who was sent here to lead this diocese, to carry on, and once again, if I thought that the majority of Catholic people in particular were calling for my resignation, that would be a different story,” Malone said at the news conference.

He also said that if “most of the Catholic people wanted me gone, then I’d have to look at it in a different way.”

The News survey is the first poll to ask area residents about their support for the bishop.

The poll asked 362 residents of Erie County and 111 residents of Niagara County for their opinions. The respondents included 267 women and 206 men — all of whom self-identified as Catholic or lapsed Catholic.

Malone had slightly more support to stay on among respondents aged 51 and older, but even those percentage numbers were small — 4.2% for those 51-75 and 4.5% for those 76 and older.

The poll's margin of error is plus or minus 4.5%, according to Cornerstone Research & Marketing.

The Buffalo Diocese includes 571,000 Catholics in eight Western New York counties that have a total population of 1.5 million people.

The Buffalo News poll results echoed an informal survey last week of parish leaders at Church of the Annunciation in Elma, where 23 of 29 respondents (79%) to an emailed survey said Malone should resign immediately.

Tom DiScipio, chairman of the parish’s pastoral council, said the survey results reflected the anger and embarrassment many parishioners were feeling.

“Yes, he’s taken the blame here and the bullet for years of abuse, years of coverup. Nonetheless, that’s just what happens. He has not been forthcoming. And even if he was, it’s no different than a business or company. When it fails to the magnitude that the Catholic Church failed, the CEO needs to go,” said DiScipio. “There will be no healing that can start until we get new leadership in place. That’s just the way it is.”

The Rev. Eugene P. Ulrich, Annunciation pastor, sent a letter to Malone citing the parish survey and urging the bishop to offer his resignation to Pope Francis.

Other prominent Catholics, while critical of the church’s mishandling of abuse complaints, stopped short last year of asking Malone to step down and formed a group called the Movement to Restore Trust, which had been working for months with the diocese to implement a variety of reforms.

A day after the bishop’s news conference, the group withdrew its support and urged Malone to resign immediately, saying that his mishandling of misconduct cases jeopardized efforts to restore trust in the church. Malone rejected personal overtures from members of the Movement to Restore Trust’s organizing committee asking him to submit his resignation.

Malone still has backing from some priests and deacons, but a growing number of clergy who had been supportive of the bishop prior to the latest scandal also were now questioning whether he can continue to lead, according to two clergy sources.

About 200 priests have been asked either to sign a letter demanding the bishop’s resignation or to write to Malone on their own. A dozen priests signed the letter last week.

The letter is worded similarly to one signed in 2002 by 58 priests who demanded the resignation of Cardinal Bernard F. Law of the Archdiocese of Boston, following a Boston Globe expose of Law’s mishandling of child sex abuse cases and pedophile priests.

Law resigned at the Vatican about a week after getting the letter.

The author of the Buffalo letter, the Rev. Robert Zilliox, pastor of St. Mary in Swormville, originally planned to submit it to Malone last week, but he held off to allow priests more time to consult with their congregations before deciding whether to sign it.

Who is Father Ryszard Biernat, and why would he secretly record Bishop Malone?