Jackson Marchetta and his family found their seats in the stands in August at Sahlen Field, and waited a few minutes for the rest of their group to arrive for a Buffalo Bisons game.

Jackson, his parents, Colleen and Charles, and his younger sister Madison expected a crowd. A team, in fact. Just before the first pitch, players and coaches from the Niagara University men’s hockey team surrounded the Marchettas.

“Just when he saw the team surround him, when they all came up to him, he felt like the coolest little kid in the world!” Colleen Marchetta said.

It was another bond in the growing relationship between Jackson and the Purple Eagles, who officially welcomed him to the program Saturday in Lewiston, when the 7-year-old from Williamsville signed a national letter of intent to join the Niagara men’s hockey program through Team IMPACT.

“This is really special to me, and it brings me a lot of joy,” Jackson said at Dwyer Arena. “It’s special because I’ve been in touch with them for a while and I know them really well. I’ll bet we can get along even better.”

Five years ago, Jackson was diagnosed with juvenile dermatomyositis, an autoimmune disease. Team IMPACT pairs children and teenagers with disabilities with college athletic teams across the country. In each pairing, Team IMPACT aims to give the children in its program optimism, to increase each individual’s confidence and to give them a sense of belonging.

“Everyone is going through something, whether you know it or not,” Niagara captain Noah Delmas said. “In our regular, everyday lives, we don’t realize how much of an impact we can have on younger people. Just a friendly hangout, or having Jackson come to the rink, that can change his day or his week.”

When Jackson was 2 years old, he came down with a cold. Colleen Marchetta remembers that while the cold went away, Jackson’s health wasn’t improving.

Six months later, he was diagnosed with juvenile dermatomyositis.

A healthy human’s immune system fights illnesses. But, Colleen Marchetta explained, for someone who suffers from juvenile dermatomyositis, the immune system continues to attack the body rather than help it heal.

According to the American College of Rheumatology, the cause is unknown, but the inflammatory condition affects muscle, skin and blood vessels. Symptoms include muscle weakness, difficulty swallowing and skin changes, including rashes.

Even the Purple Eagles are finding out about the condition that affects about three in 1 million children each year.

But they’re not getting to know a disease. They’re forming a friendship with a little boy who loves hockey. They’re also getting a better understanding of the power of resiliency.

“I’m trying to learn from him, how positive he is,” defenseman Jordan Wishman said. “I’m trying to learn how he goes about his day, and it’s making me realize that our problems just aren’t as big. He’s going through what he goes through and he is still as upbeat as he is.”

Jackson is required to go to the hospital once a month for intravenous immunoglobulin infusion, a treatment in which he receives plasma from healthy blood donors.

But the disease definitely does not limit Jackson, a third-grader at Christian Central Academy. He plays youth hockey for the Buffalo Shamrocks and also plays soccer.

Exercise, his parents said, is a natural defense against Jackson’s illness.

“The more muscles he has and the stronger his muscles are, if there’s ever a flare, it will actually help him,” his mother said. “It will take longer before he shows signs of muscle weakness, or where he can’t walk. The doctors told us, ‘You’ve got to exercise and do as much as you can.’ ” 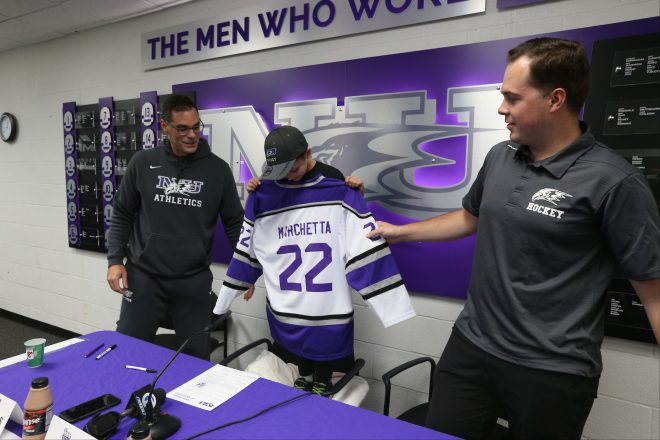 The Marchettas learned of Team IMPACT through Cure JM, a nonprofit organization, on one of the family’s many trips to Boston, where Jackson has undergone multiple treatments.

Charles and Colleen Marchetta found out in the spring, after hockey season and just before the end of the school year, that Team IMPACT matched Jackson with Niagara. A relationship began. Mostly through email, as Colleen read emails from various players to Jackson. The seeds of friendship were planted, and carefully cultivated.

The first meeting between Jackson and Niagara was an ice cream date in the spring. The players expected Jackson to be shy and somewhat intimidated by being around college students. But Jackson talked. And talked a lot, particularly about his love for hockey and for Buffalo sports.

“He was a super outgoing kid, who warmed up, right away,” Wishman said. “He’s super fun to be around.”

After the Bisons game, Wishman and four of his teammates traveled in August from Lewiston to Buffalo, where Jackson was undergoing his monthly immunoglobulin infusion treatment at Oishei Children’s Hospital.

Jackson remembers how he was immediately put at ease by the five players who sat with him as he went through a grueling treatment. He relished the fact that they took a keen interest in him.

The players also came bearing a gift. Delmas couldn’t make it to Buffalo to meet Jackson, but earlier in the week, he passed around a hockey stick that each of his teammates signed for Jackson.

“You could tell he was a little groggy when we visited,” defenseman Jack Zielinski said. “But he perked up a little bit. We were there for an hour and a half, just talking about his games and about school, and it was so easy to talk to him. He’s like I was, when I was a kid. I’m sure all of us were like that when we were that age.”

Niagara coach Jason Lammers and director of hockey operations Phillip Rhodes flanked Jackson on Saturday in the Niagara hockey team lounge at Dwyer Arena, as he signed a specially designed national letter of intent to join the Purple Eagles.

“My biggest thing is that I would be really happy to come see you guys play and have a great friendship with you,” Jackson told the Purple Eagles, during a news conference. 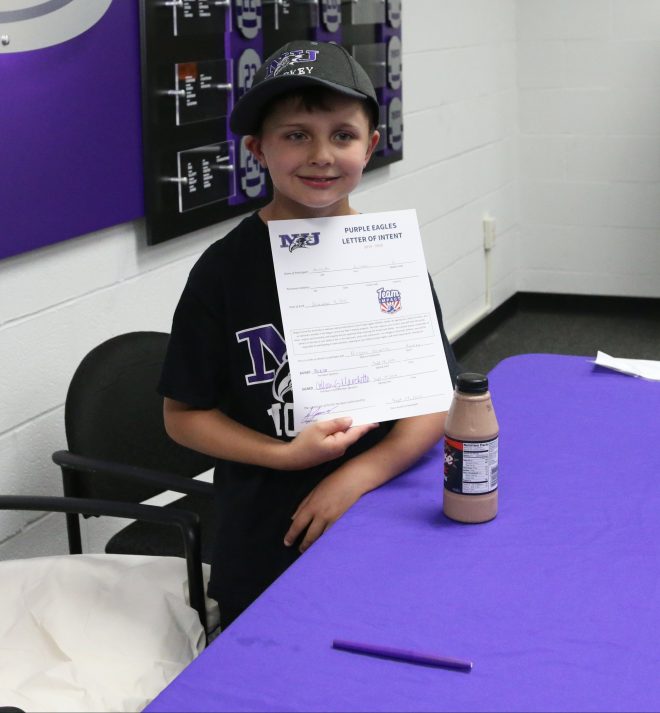 The Purple Eagles are ready to take Jackson under their wings.

The Marchettas have made plans to attend every Niagara hockey game, and they will sit in a designated suite during home games. One that, Jackson explained, comes with a VIP card that allows him to bypass concessions lines to get food.

“He’s the kid that gets to join the Niagara University hockey team. He’s the cool kid.”